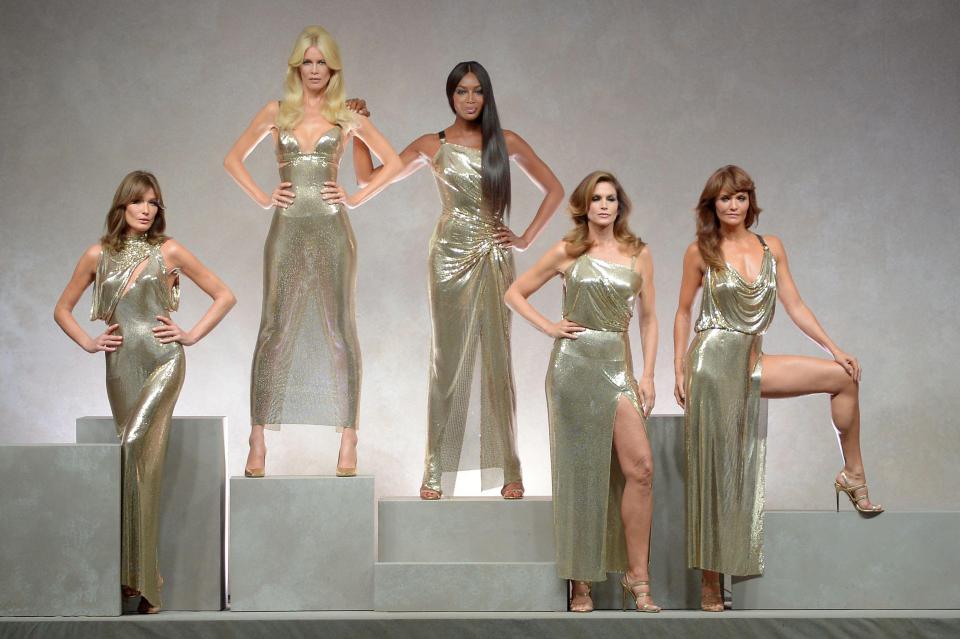 It has been 20 years of the brutal murder of Gianni Versace at the entrance of his villa in Miami Beach. The sinister shots stopped the life of one of the most talented fashion designers in the world. The eccentricity, the provocativeness, the colors and the bright patterns made us dream and wonder how would fashion look today if Gianni Versace was still alive?! Donatella Versace chose to stage her Spring 2018 show at Milan’s Triennele museum as a tribute to Gianni Versace’s inspirations and creations, to celebrate “a genius …an icon…my brother.” She used references- the key prints and pieces from the years 1991-95, the period known for some of Gianni’s most iconic collections. 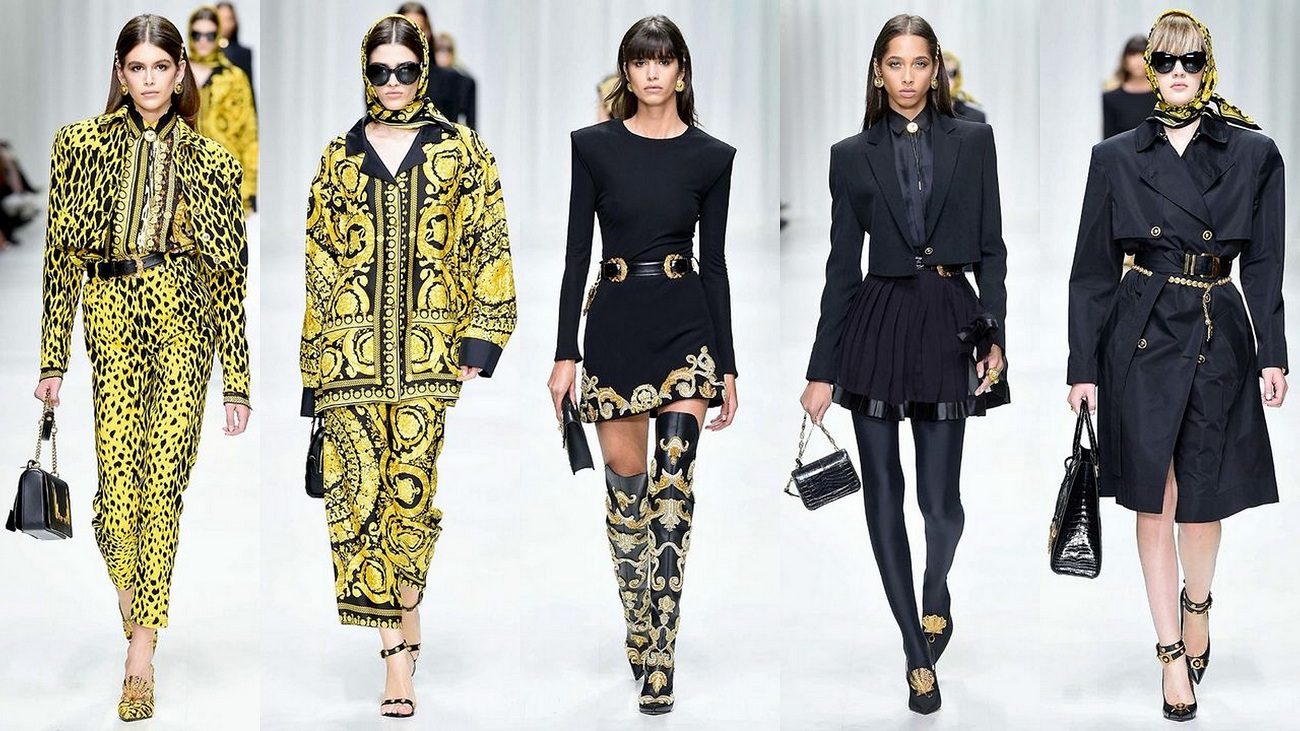 He adored women, he celebrated femininity, women’s sex appeal and power. Some would say that Gianni Versace created supermodels, still some would say they also created him. It is hard to separate his designs from the most beautiful women that walked his runway. They became legends by wearing his designs. We all remember the most famous seven girls- Cindy Crawford, Naomi Campbell, Linda Evangelista, Christy Turlington, Claudia Schieffer, Helena Christensen and Kate Moss, but also following gorgeous women earned star status mostly thanks to Gianni- Iman, Stephanie Seymour, Yasmeen Ghauri, Karen Mulder, Nadège du Bospertus, Shalom Harlow, Amber Valetta, Carolyn Murphy and Nadia Auermann. The pop and rock stars adored him, from Elton John, David Bowie to Steven Tyler and Lenny Kravitz or from Madonna to Cher and Tina Turner, they all wanted touch of his daring designs, bold prints and sexy cuts. Gianni Versace brought eroticism and excitement to fashion and the whole world was in ecstasy for his dresses decorated with gold oversized safety pins, iconic Baroque prints or the ones with the fearless cuts.

At the beginning of 90s, Gianni experimented with colors and materials, but his major focus was quality. He would say that his style is blend of Madonna, Princess Diana and Courtney Love, because they were all his customers. His designs were daring, but he also followed trends. When he felt women would like to wear mini skirts, he designed them. He loved colors and mixed everything with black, which he called “happy black.” Gianni Versace was inspired with art and he was very much interested in Warhol‘s works and Factory. In 1991, Versace selected classic Warhol images that originated in the 1960s- the pairing of James Dean and Marilyn Monroe is like the Pop Art Medusa emblem already an icon for Versace. The Fall 1992 collection, provocatively titled “Miss S&M” was inspired with Wild Wild West and Native Americans, but also Gianni imaginatively used bondage. In 1993 Spring/Summer collection were present colorful hippy pants, in 1994 he designed gold metal mesh dresses, while for the Fall/Winter 1995 he designed sheer-plastic dresses embellished with Austrian crystals. After 1996 his designs were more light, like striped silk slip-dress, very sophisticated and sensual. 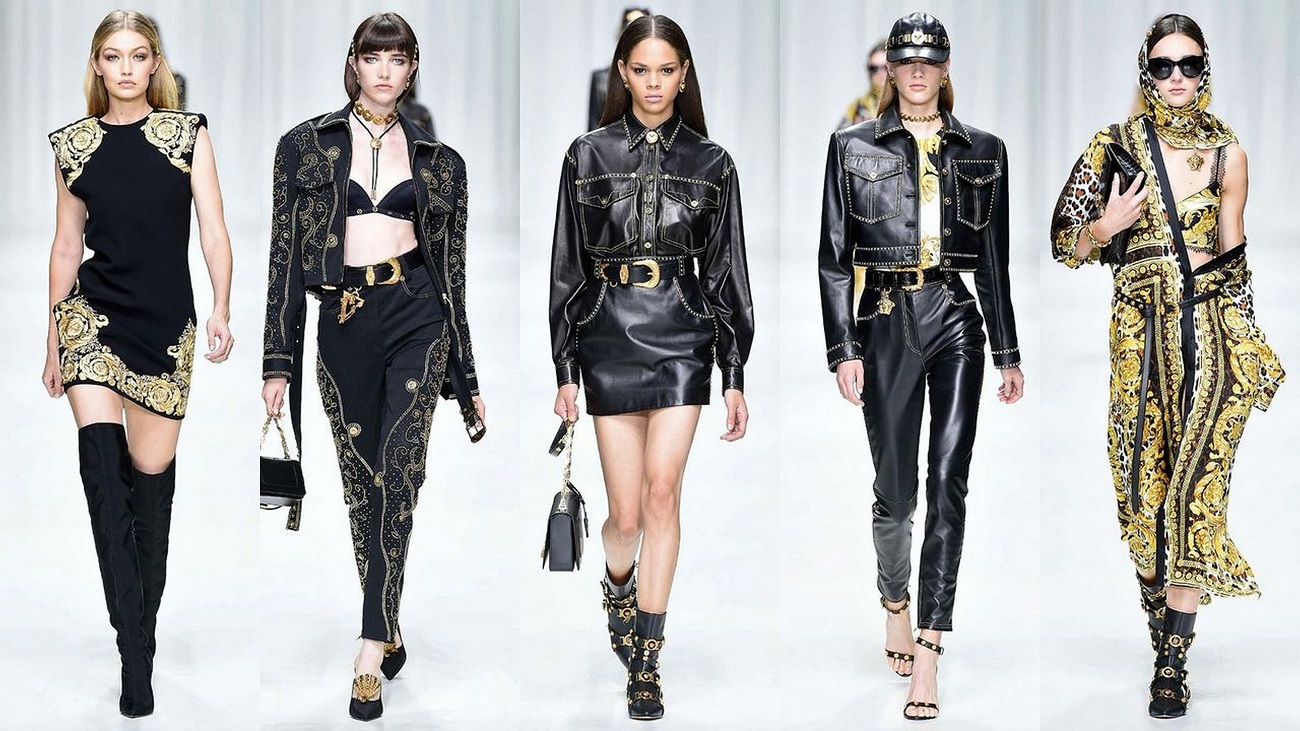 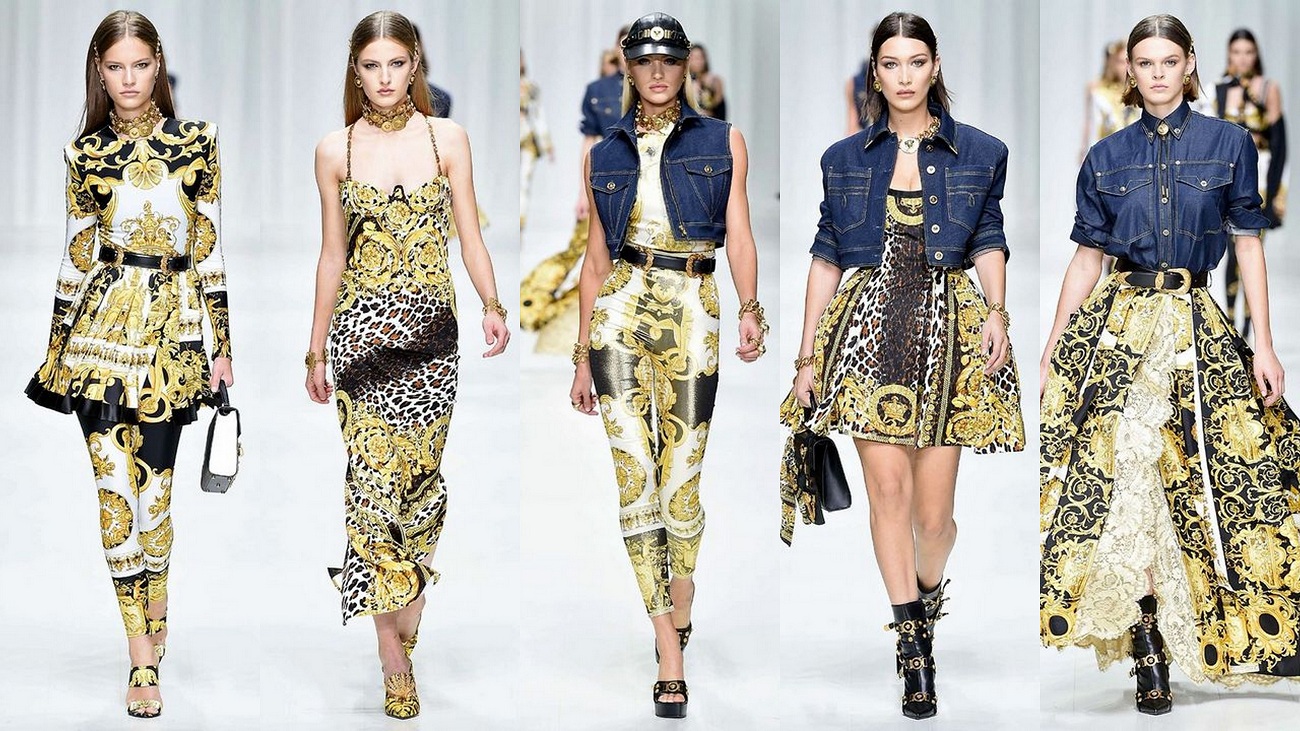 Part of the collection dedicated to Gianni Versace Spring/Summer 1992 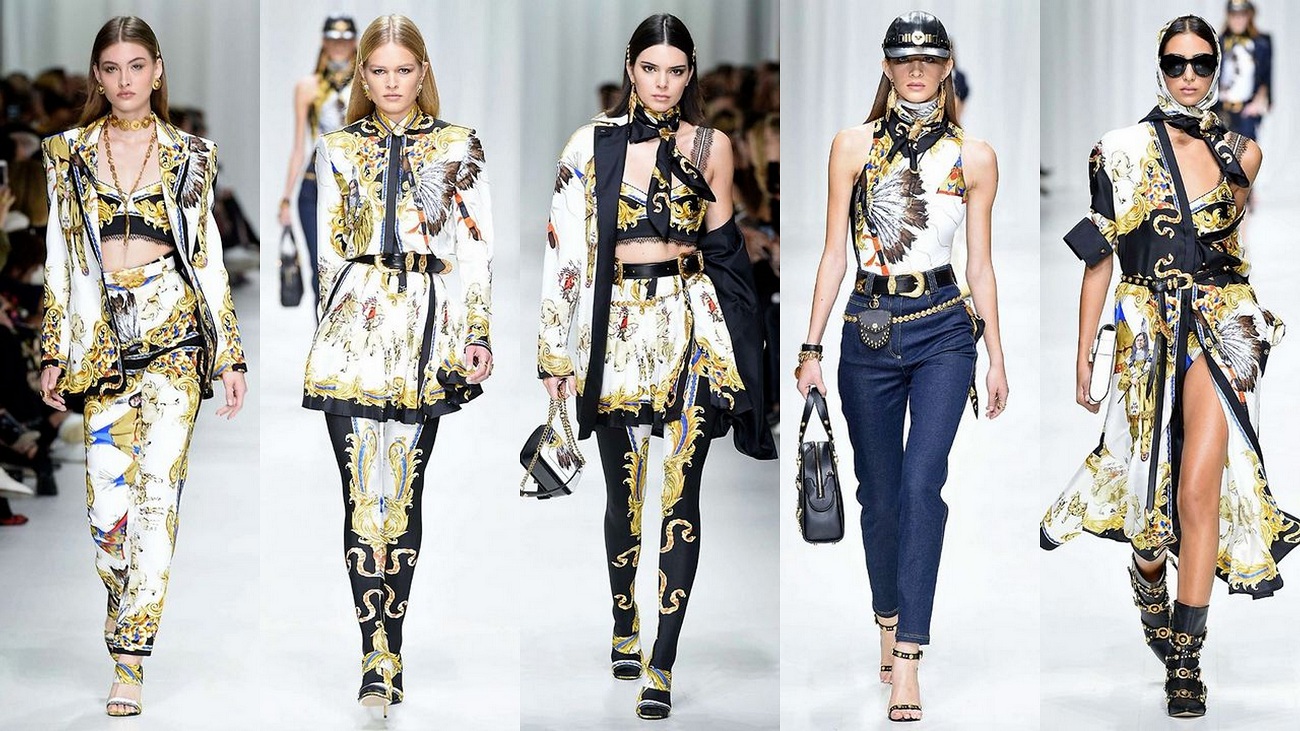 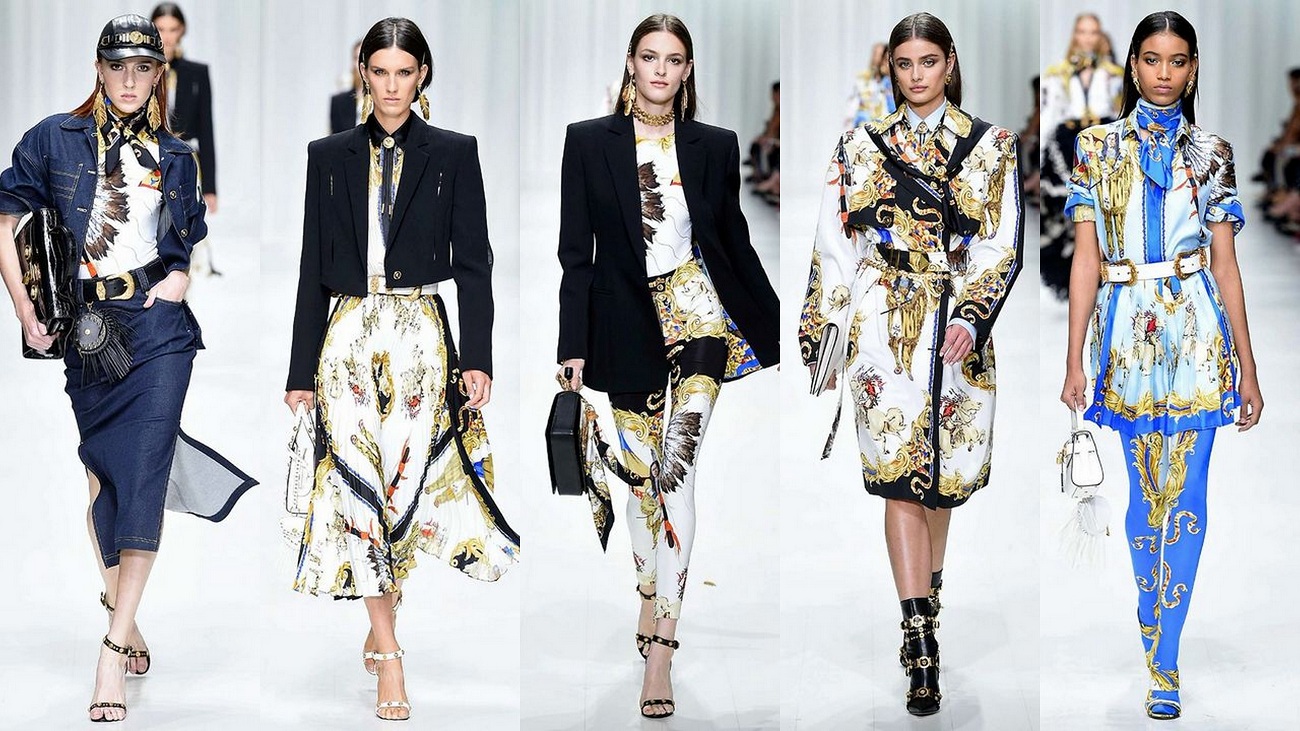 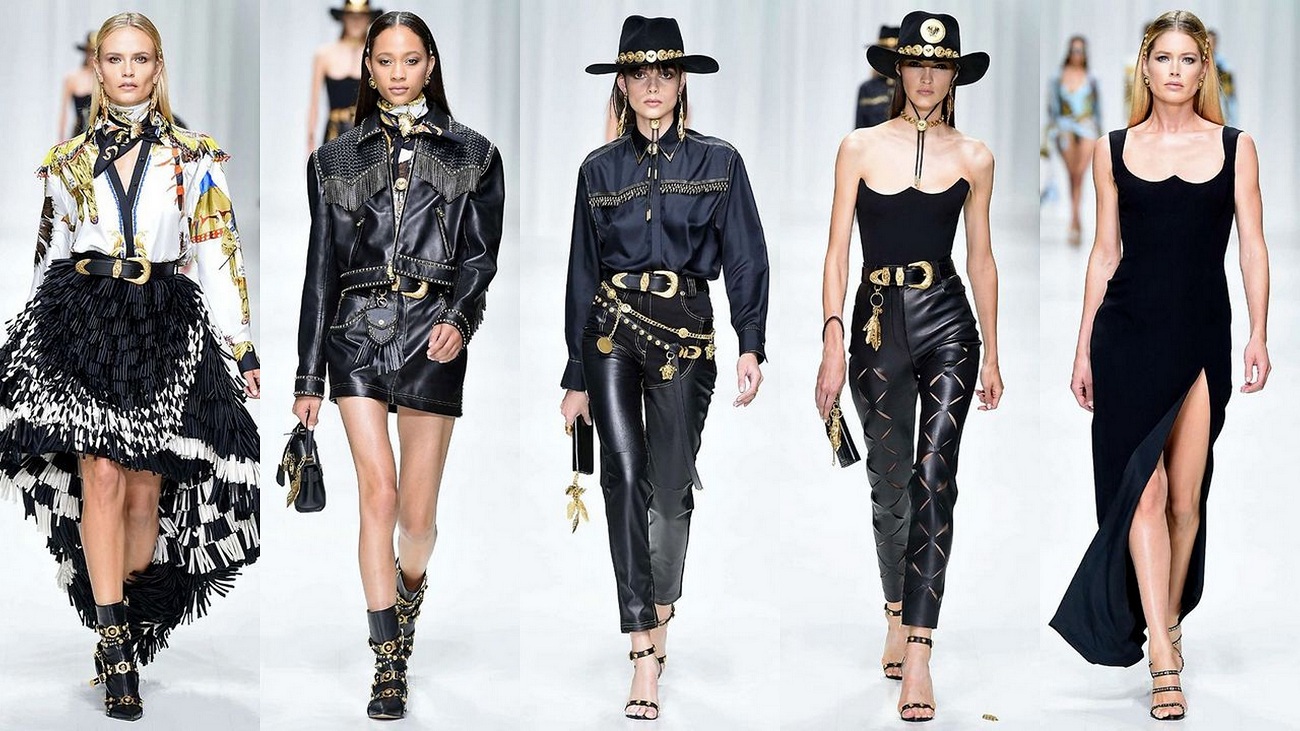 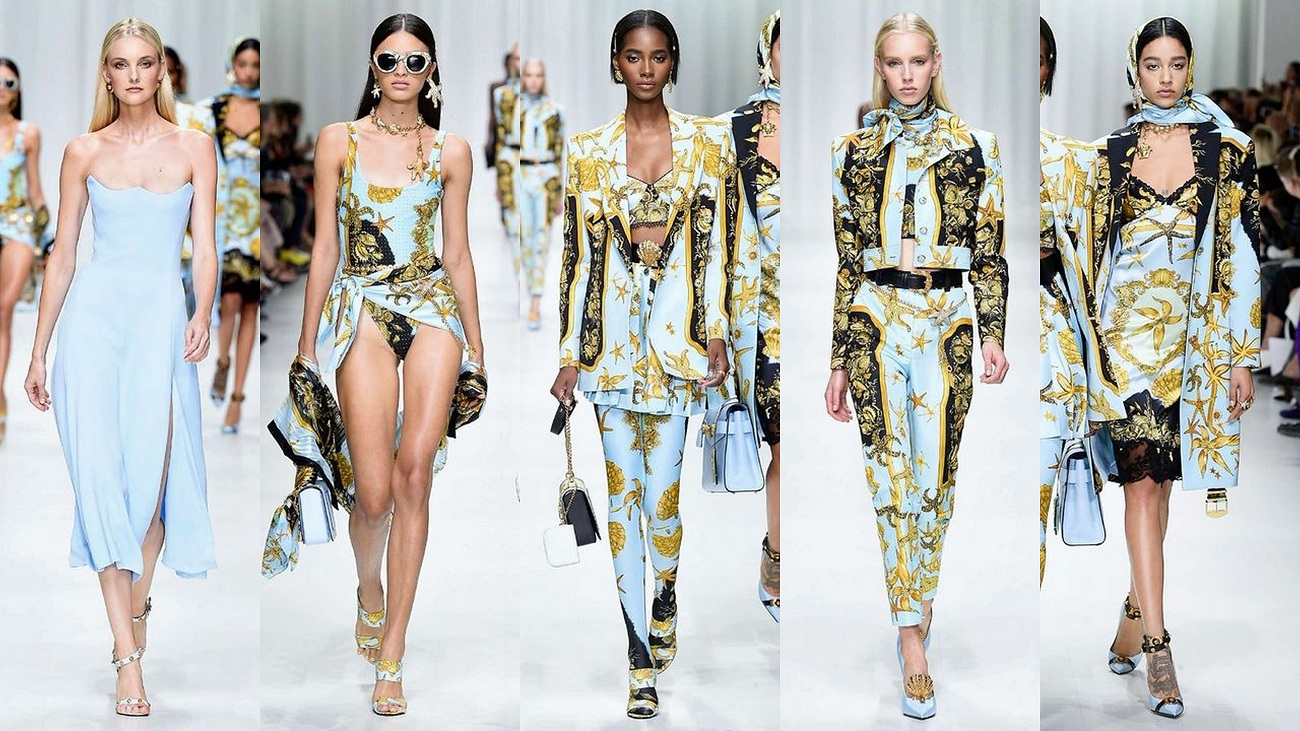 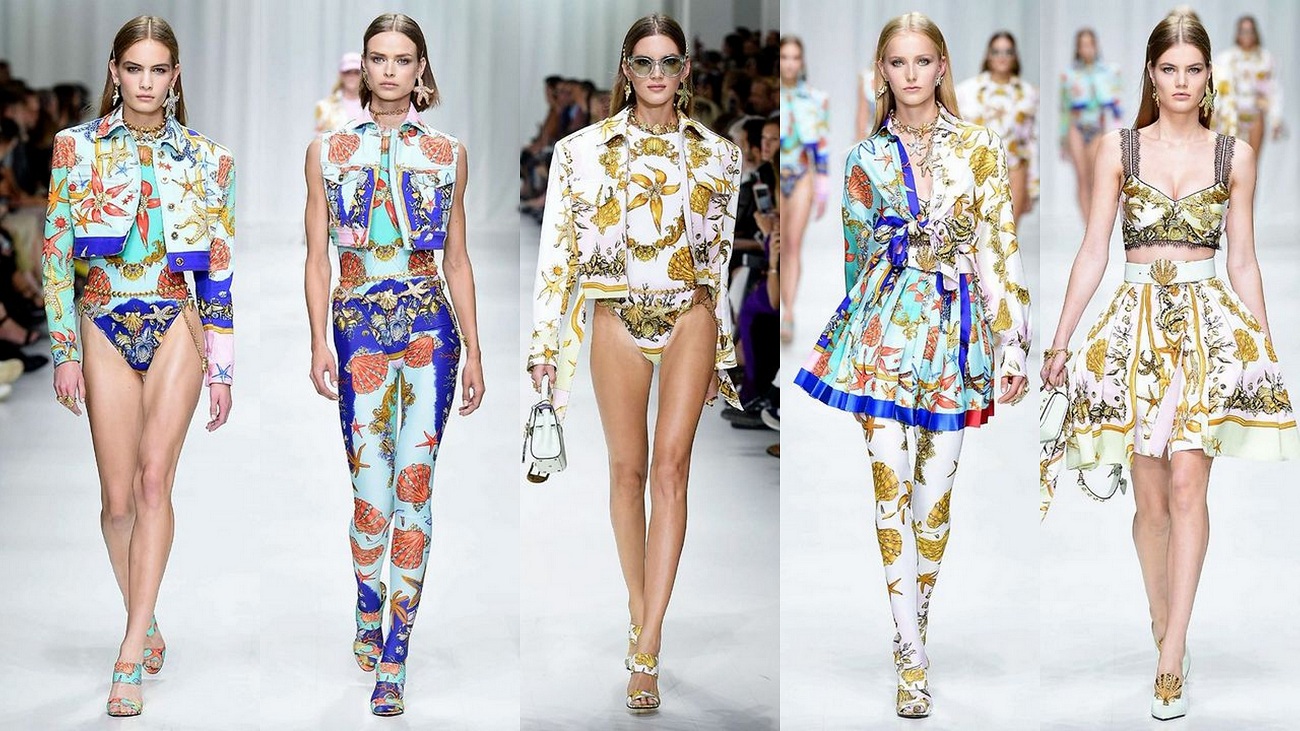 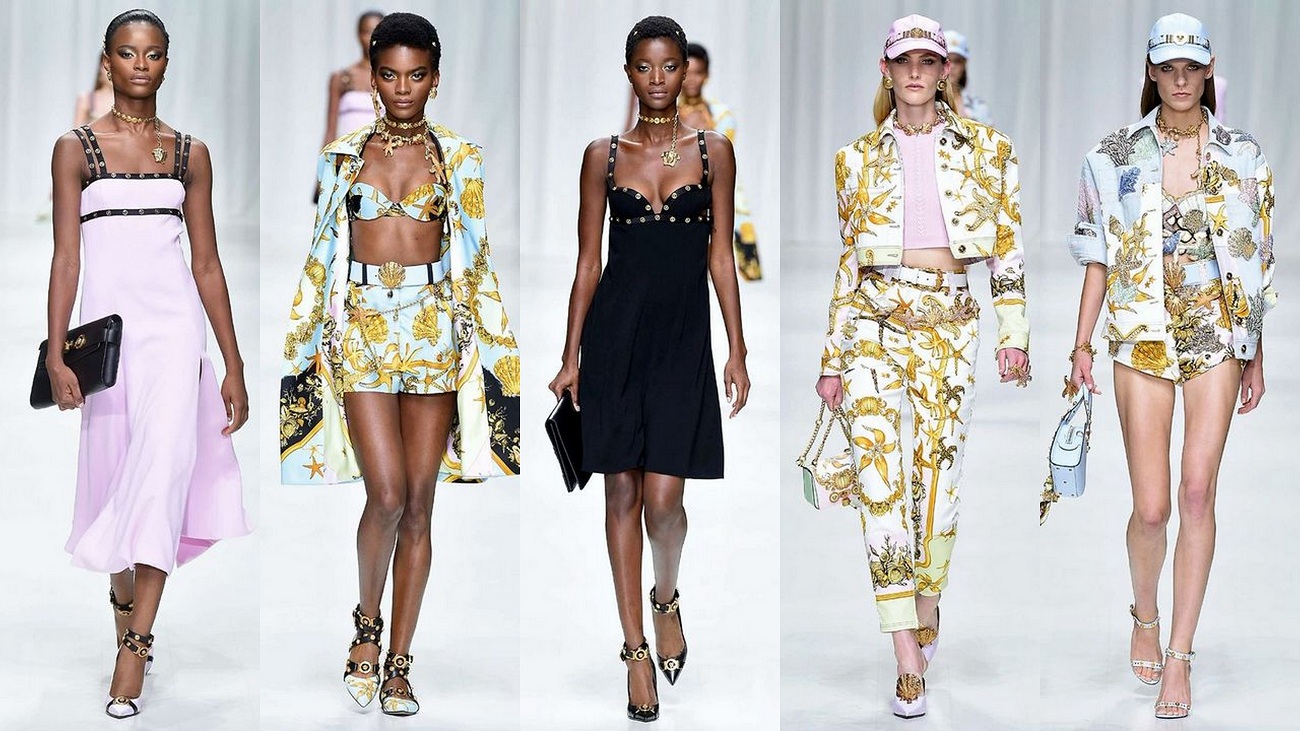 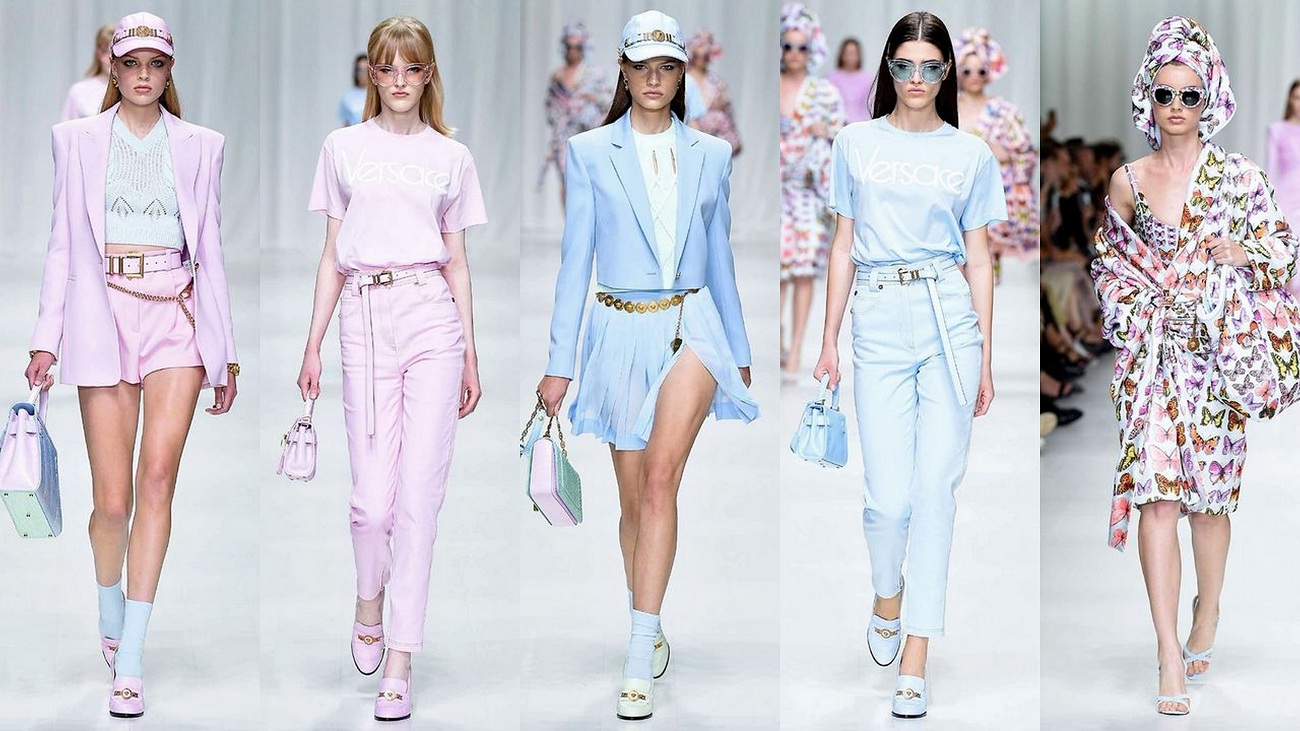 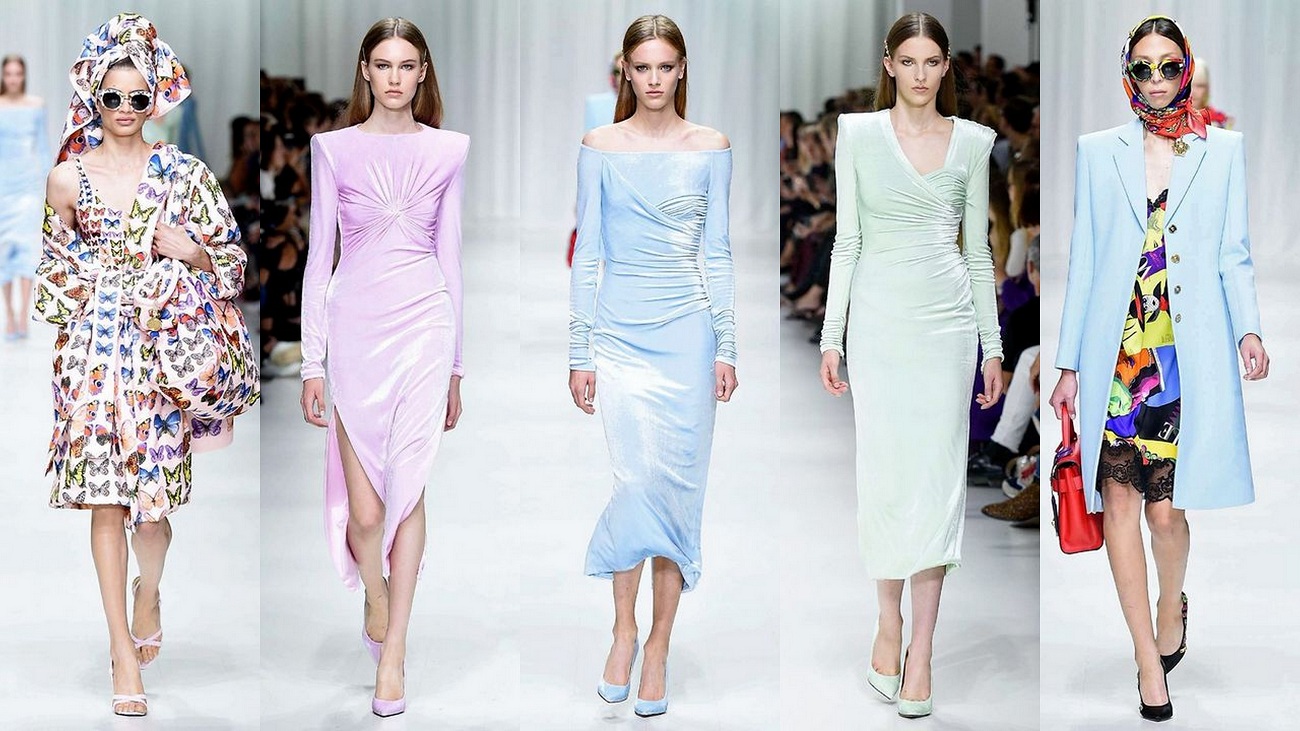 Butterfly prints were used for the Spring 1995 collection 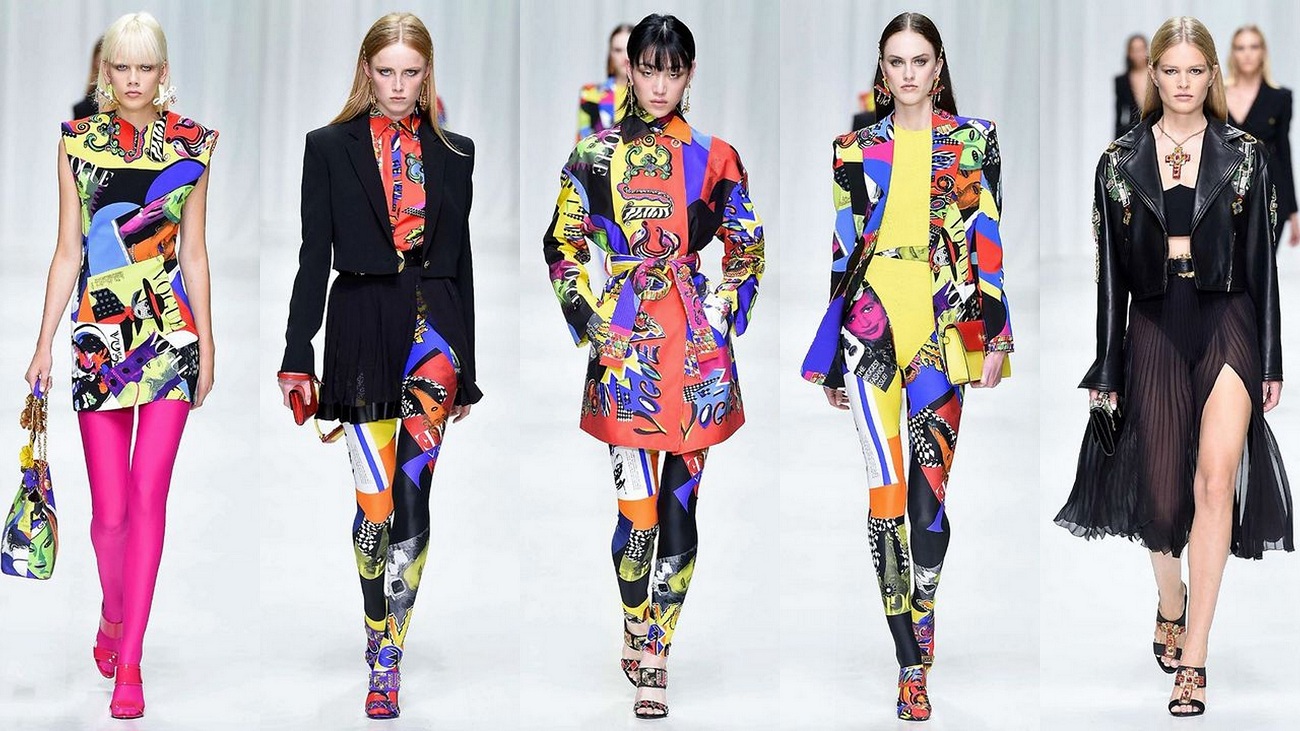 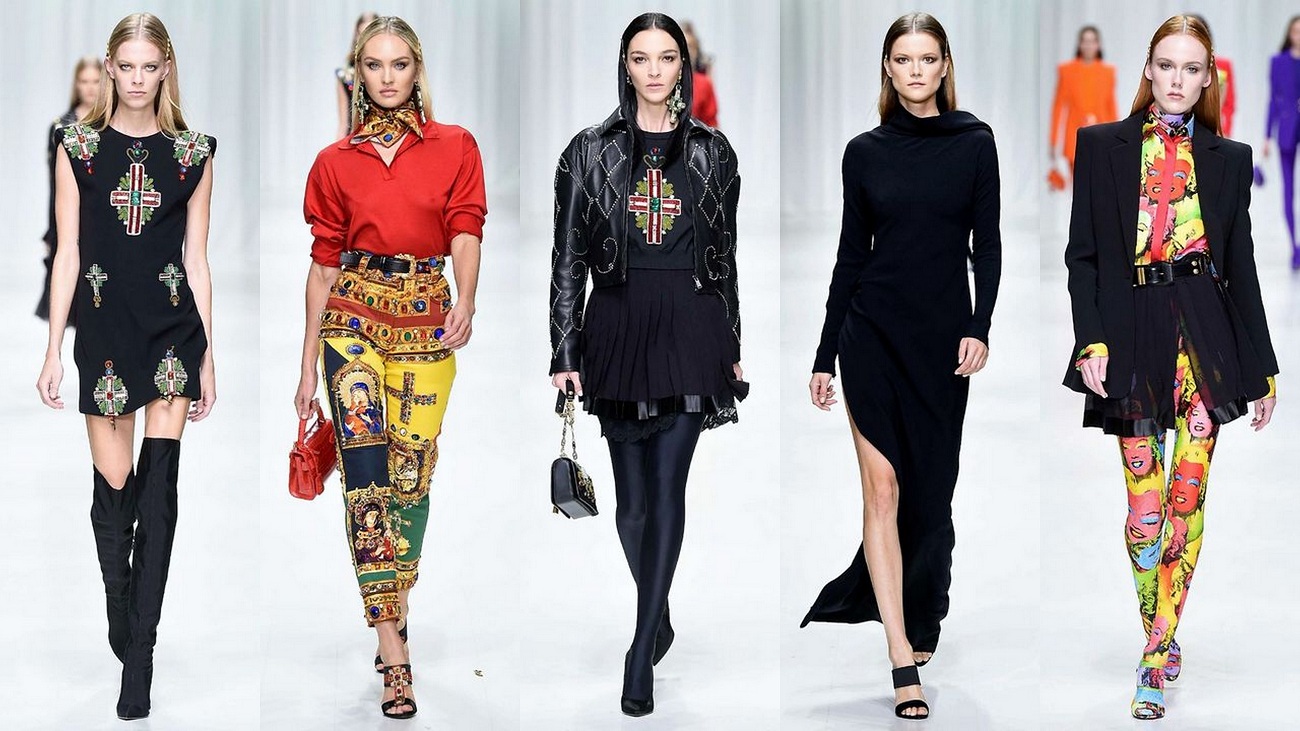 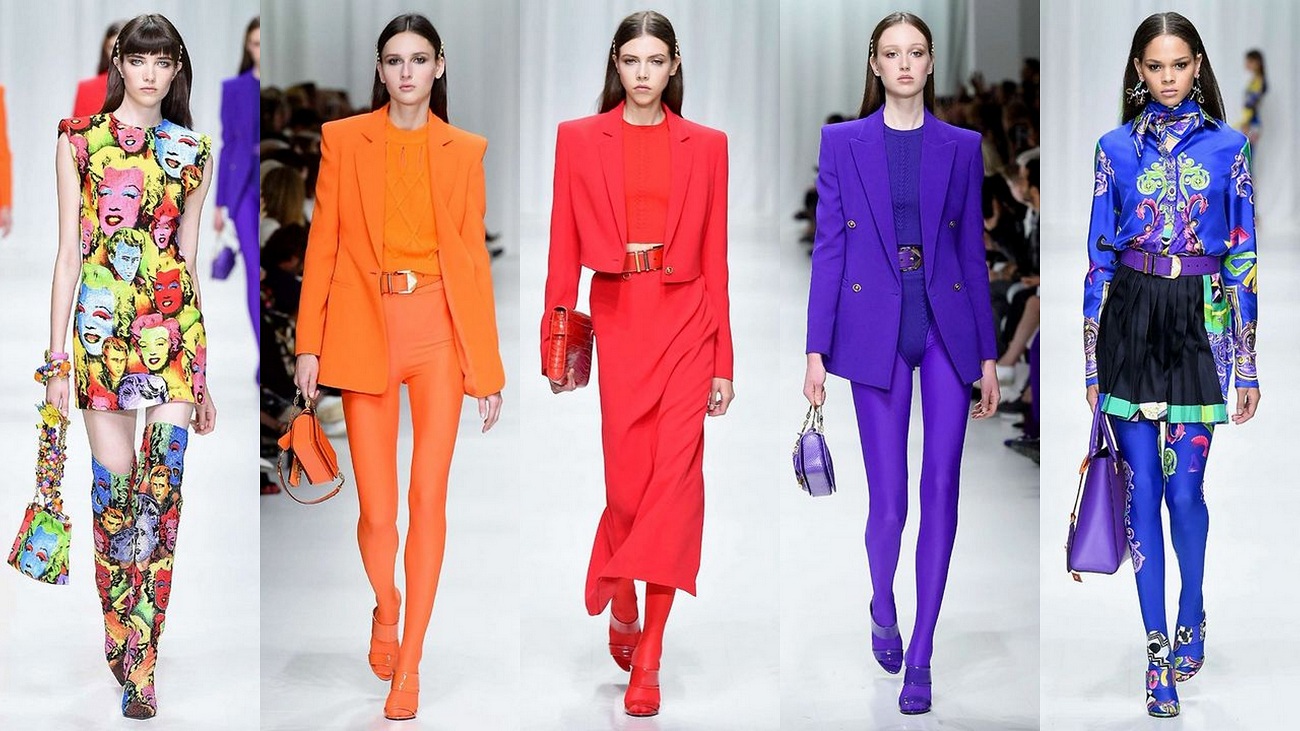 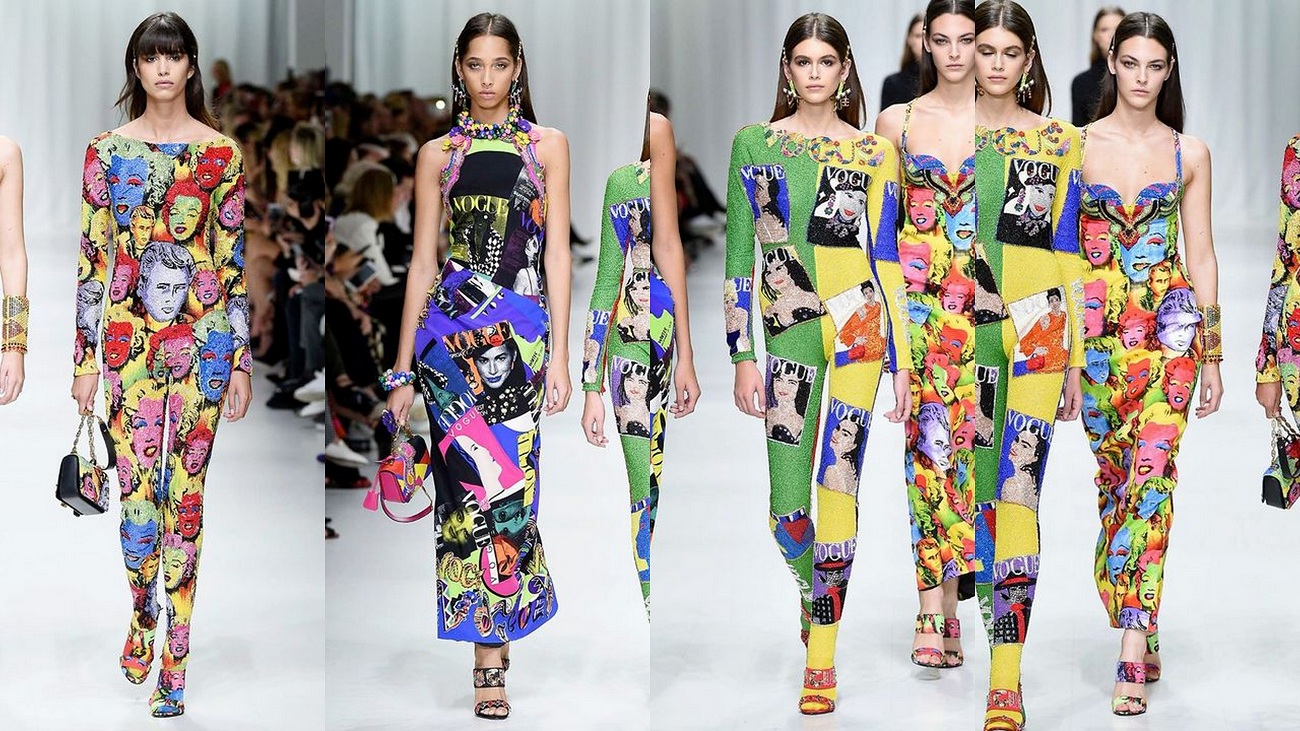 Andy Warhol images were seen in the Spring/Summer 1991 collection 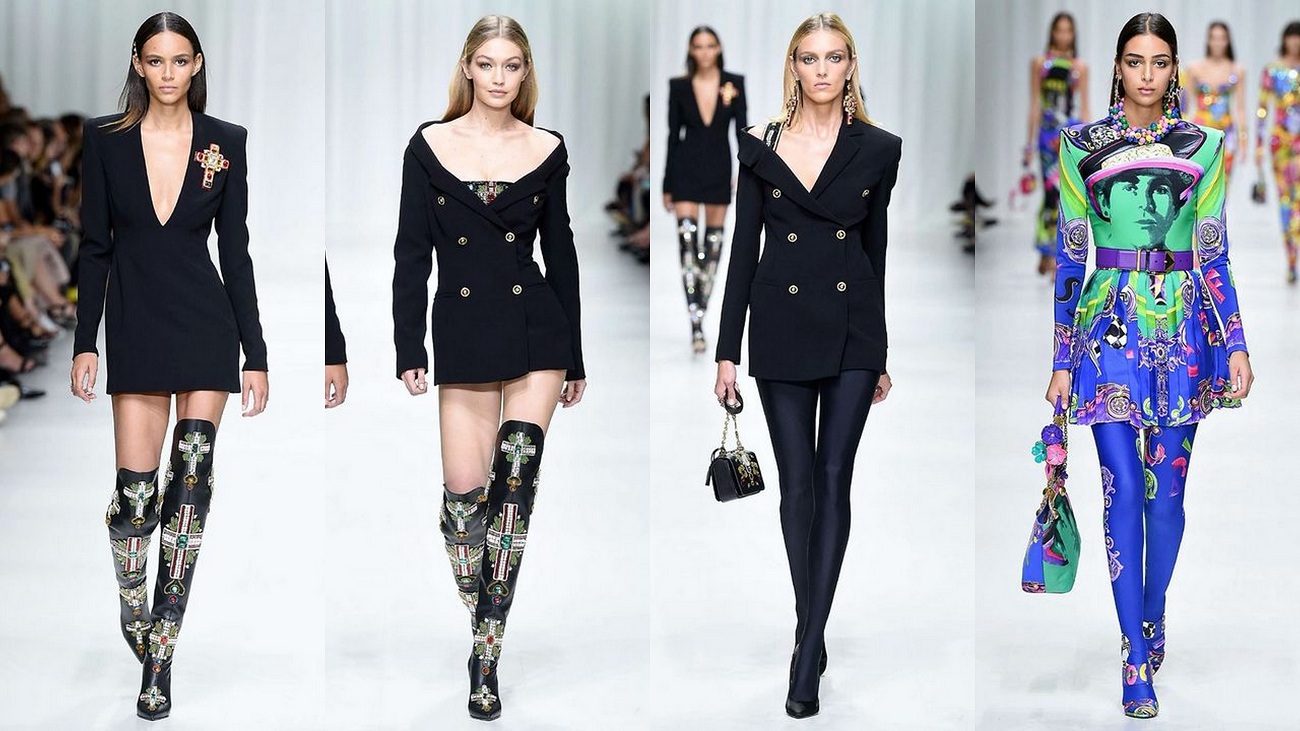 This part of the collection was inspired with Fall 1991 designs when for the finale of his show, Gianni Versace sent Linda Evangelista, Cindy Crawford, Naomi Campbell, and Christy Turlington arm in arm down the runway, mouthing the lyrics to “Freedom! ’90” as they went. 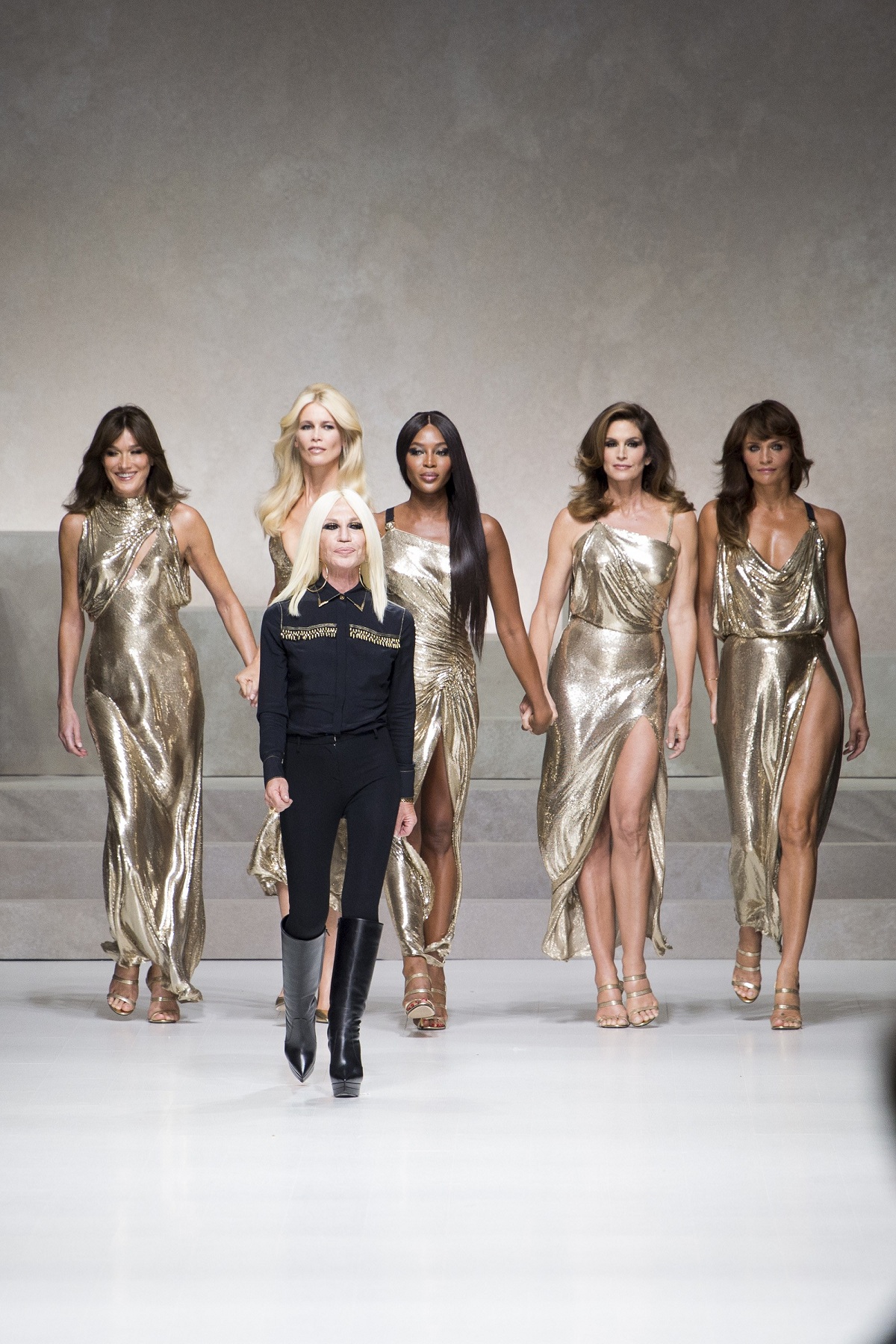 Once I heard Gianni Versace say: “In everything you do, you have to try to reach the Moon”, with this homage collection Donatella Versace achieved that. She took us on the incredible journey and showed us talent that once lightened the fashion industry, a genius …an icon…, and forever my favorite designer.

Gianni Versace was born at 2th December 1946 in Reggio di Calabria, Italy. Thanks to his mother and the everyday practice in her atelier and participation in the sewing process, Gianni mastered the secrets of the craft, formed professional and responsible attitude to the materials and to the technique of their cutting, sewing and modeling. From 1964 till 1967 Gianni studied architecture. In the next four years he worked as designer and buyer of textiles for the studio of his mother in Paris and in London. For some time he worked for different fashion houses as “Byblos” and later “Jenny”‘s line “Complice”, and in 1978 he opened his own company in Milan. The same year he premiered first collection for women, and in 1979 he launched his first collection for men. Two years later he created his first fragrance. In the sphere of the haute couture he entered in 1989, when he opened his own atelier of couture in Paris. In 1993 he started to make the furniture line. He created the line “Versus” in answer of the incredible interest to the sports and youth style of clothing, offered at reasonable prices. For comparatively short time Gianni Versace with the help of his brother Santo Versace and his sister Donatella Versace succeeded to build an unseen fashion empire that possesses more than 500 boutiques in all over the world and for which work over 6000 employees in dozens of countries. Here aren’t included still more 200 stores for jeans, bringing his name. To the day of his unexpected death his personal fortune is valued at 900 millions of dollars and the annual turnover of the fashion house reaches 1 billion dollars.