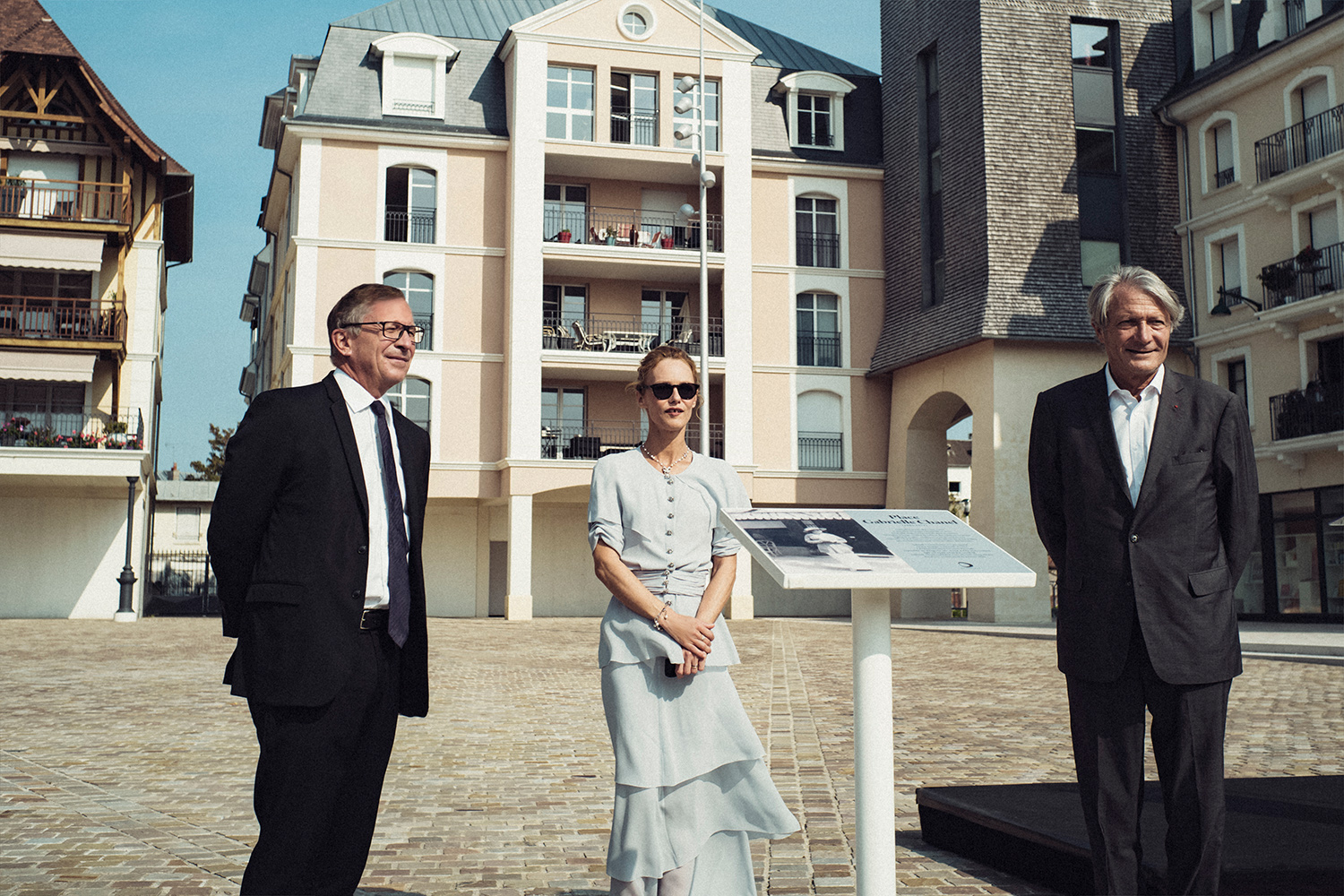 For the second year running, Chanel is partnering with the Deauville American Film Festival, whose 46th event will be held from September 4th to 13th 2020, and will be presenting films from the Cannes and Annecy film festivals as well as its own selection. The artist Vanessa Paradis will be president of the Deauville Festival jury this year, and the Revelation jury will be presided over by Rebecca Zlotowski. 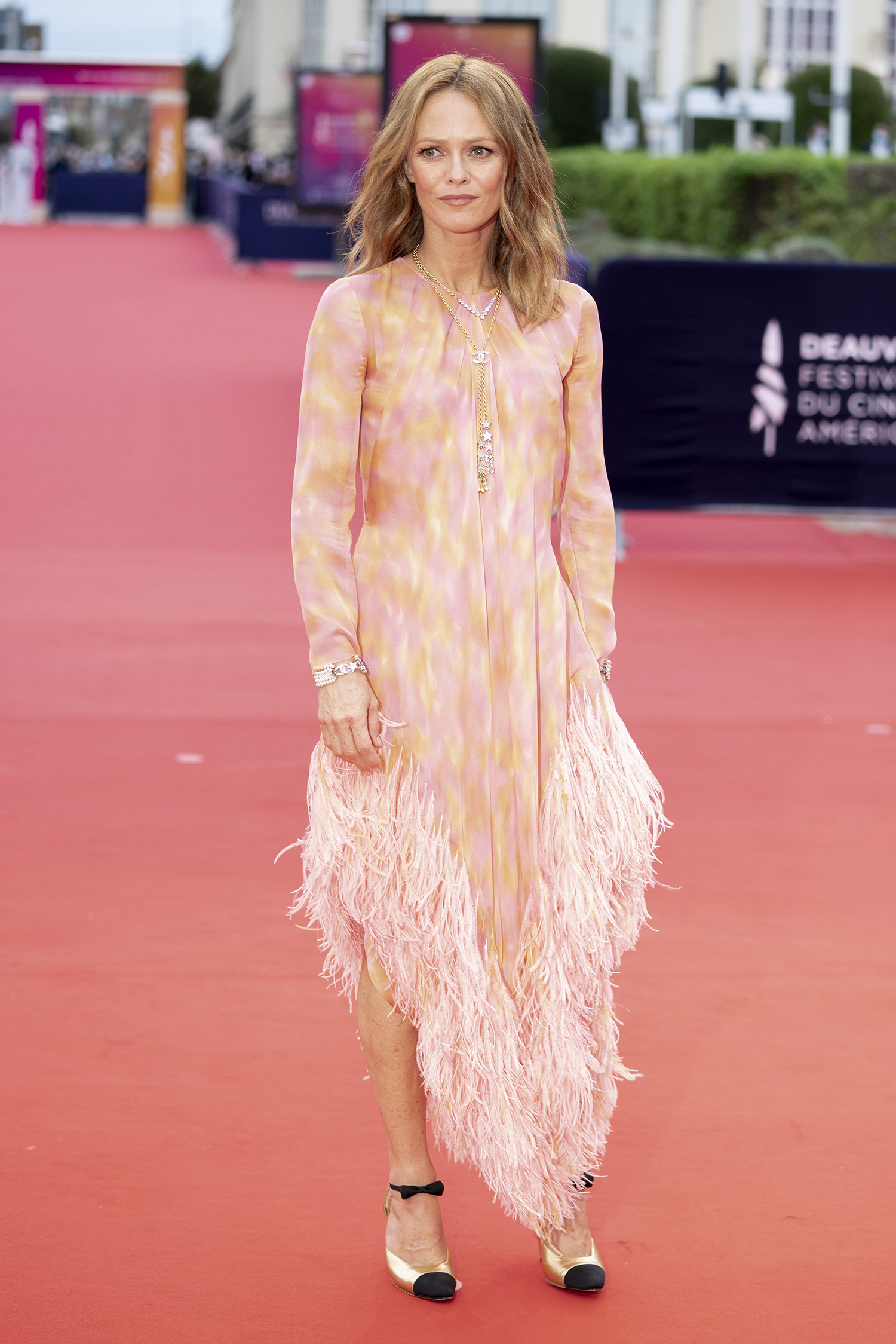 Vanessa Paradis, Chanel Ambassador and President of the jury, wore a multicolor silk dress with pink feathers from the Paris-31 rue Cambon Métiers d’Art collection, with Chanel custom jewelry and shoes at the Opening Ceremony

Deauville has particular resonance with the history of Chanel. It was in this emblematic Belle-Epoque beach resort in 1912, that Gabrielle Chanel opened a hat shop in her name, on the rue Gontaut-Biron. The couturière noticed the tops in jersey worn by fishermen and decided to use this “poor” material, which up until then had been reserved for men’s underwear and sailors’ t-shirts. From 1913, she was making jersey blouses and supple suits. Simply tied with a belt at the hips, they drew attention away from the bust and the curve of the back and didn’t restrict the waist. As beige – the color of wet sand on Deauville’s beach – became one of her favorite colors, Gabrielle Chanel imposed a liberated and resolutely modern silhouette, one that would revolutionize the allure of women forever. A century later, in 2013, Karl Lagerfeld made a short film entitled Once upon a time, which chronicles Gabrielle Chanel’s early days in Deauville, with the British actress and House ambassador, Keira Knightley playing the designer. In 2018, the story continued with Chanel In-House Perfumer Creator Olivier Polge who created Paris-Deauville, for the Les Eaux De Chanel collection, an aromatic fragrance based on basil and Sicilian orange with a lively radiant freshness. 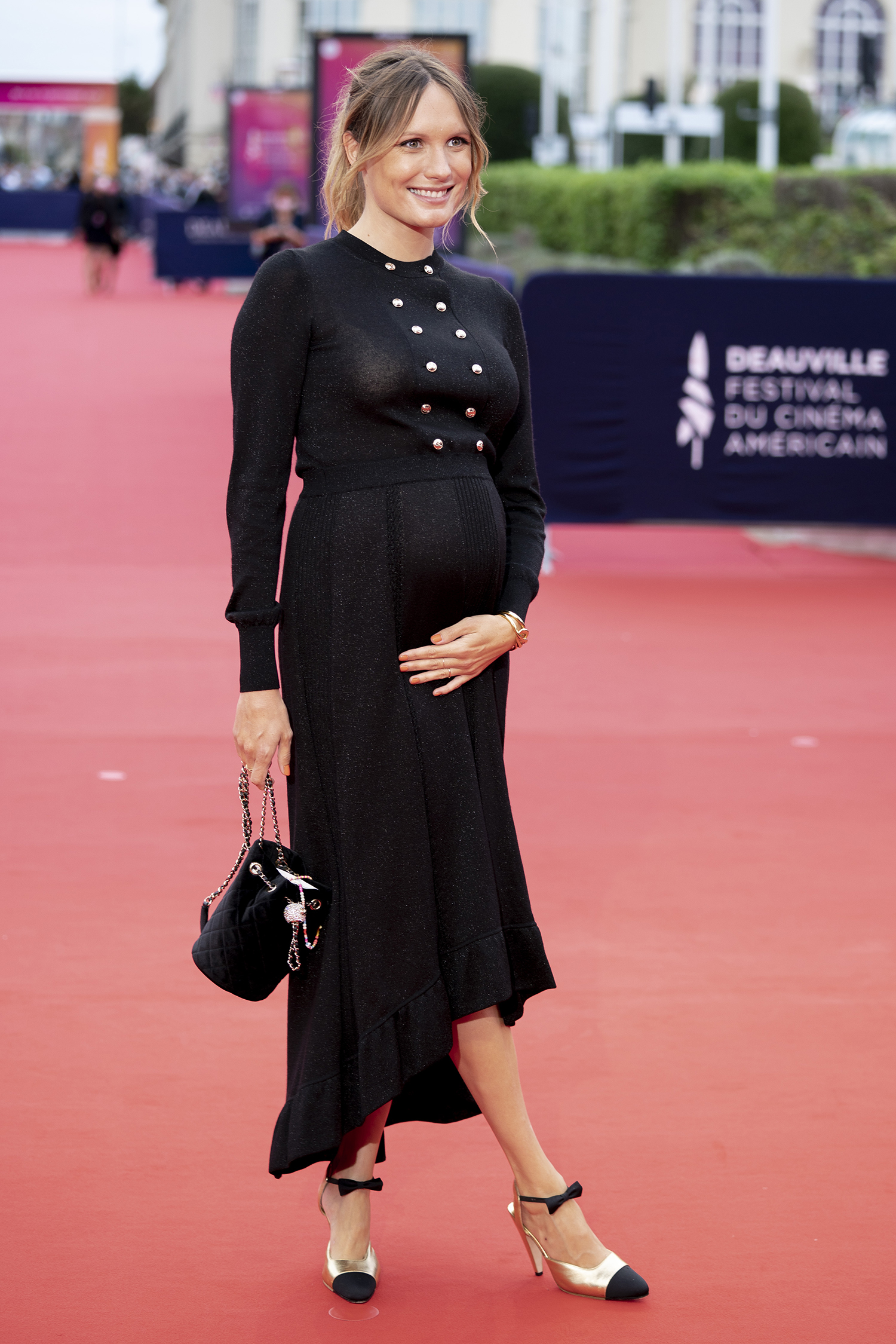 Ana Girardot, French actress, wore a black cashmere dress from the Fall-Winter 2020/21 Ready-to-Wear collection, with Chanel bag and shoes at the Opening Ceremony

While Gabrielle Chanel and Deauville are inseparable, Chanel and cinema have also always been linked by beautiful collaborations, from Gabrielle Chanel and Karl Lagerfeld to Virginie Viard today. In 1931, at the height of her fame, Gabrielle Chanel crossed the Atlantic to go to Hollywood, at the invitation of American producer Samuel Goldwyn who wanted the couturière to transform his actresses into icons. There, Gabrielle Chanel met Greta Garbo – who greeted her on her arrival in Los Angeles -, Marlene Dietrich as well as Gloria Swanson, who she dressed for the film Tonight or Never directed by Mervyn LeRoy. “Miss Swanson’s gowns designed and executed by Chanel of Paris” announced the film credits. The director George Cukor also introduced her to the actress Katharine Hepburn, who, forty years later, would play Gabrielle Chanel in the Broadway musical, Coco. However, her understated creations didn’t correspond with Hollywood’s vision of glamour. The couturière returned to France, where her style seduced filmmakers such as Jean Renoir and Marcel Carné. Later, this unaffected simplicity would be echoed in the Nouvelle Vague, in films made by Jean-Luc Godard, François Truffaut, as well as Louis Malle and Alain Resnais, and was perfectly embodied by young actresses including Jeanne Moreau, Anna Karina, Delphine Seyrig, Romy Schneider and Jean Seberg. As soon as he arrived in 1983, Karl Lagerfeld set out to celebrate this special relationship with the seventh art. A true film lover, he collaborated with numerous directors, from Franco Zeffirelli to Pedro Almodóvar, and dressed actresses, notably Kristen Stewart, Penélope Cruz, Margot Robbie and Marion Cotillard, both onscreen and for the red carpet. The biggest directors such as Martin Scorsese, Ridley Scott, Baz Luhrmann, James Gray and Steve McQueen have also been involved with the advertising campaigns for Chanel perfumes. 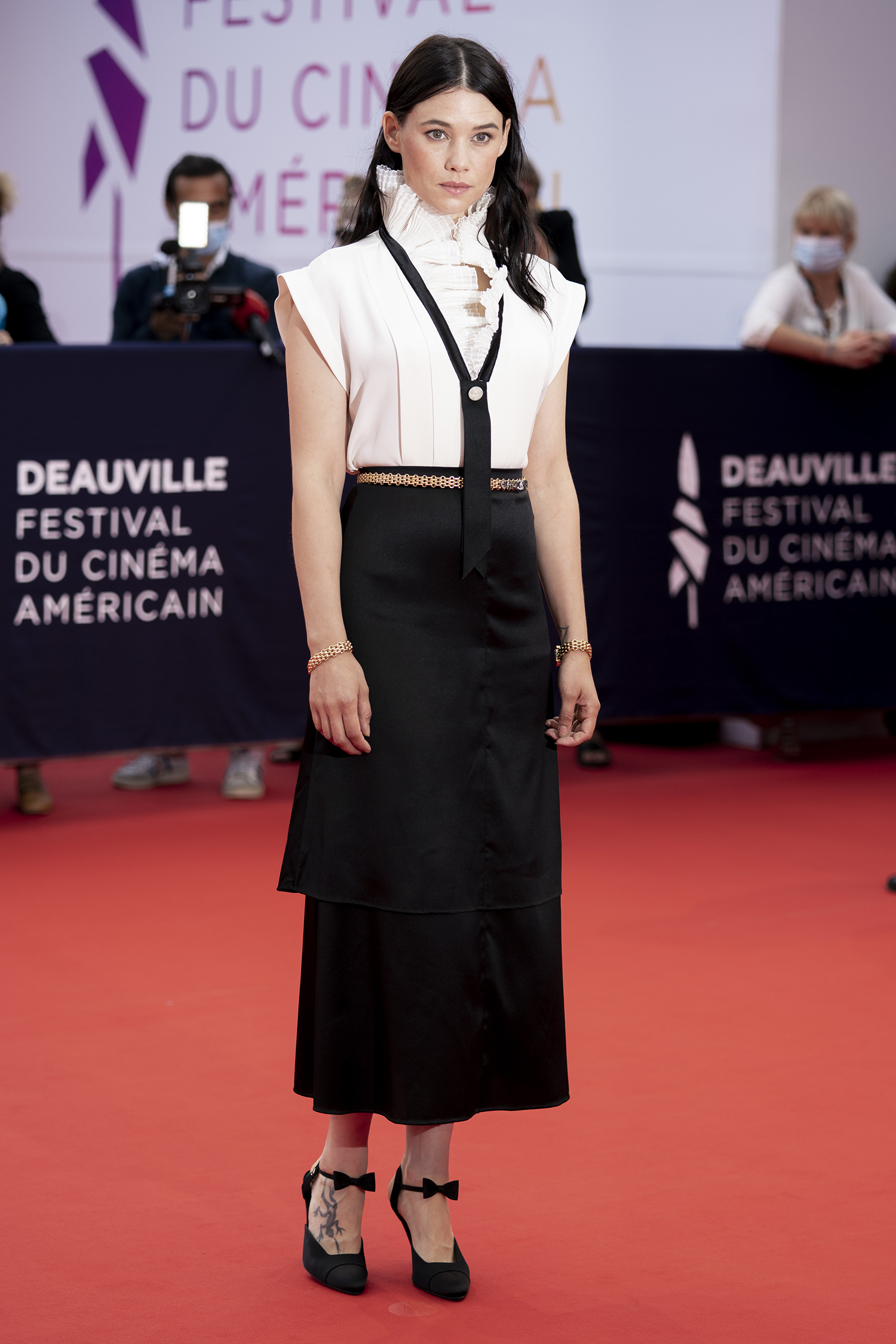 This unique connection with the film world continues today under the impetus of Virginie Viard. The Artistic Director of Chanel’s Fashion collections began her career as an assistant to the famous costume designer Dominique Borg for Camille Claudel (1988) by Bruno Nuytten, starring Isabelle Adjani, before designing the costumes for Trois couleurs : Bleu (1993) directed by Krzysztof Kieślowski. For her first Métiers d’art collection in December 2019, Virginie Viard called upon director Sofia Coppola to design the décor for the runway show: a reconstruction, in the nave of the Grand Palais, of Gabrielle Chanel’s apartment, the Haute Couture salons and the mirrored staircase at 31 rue Cambon. 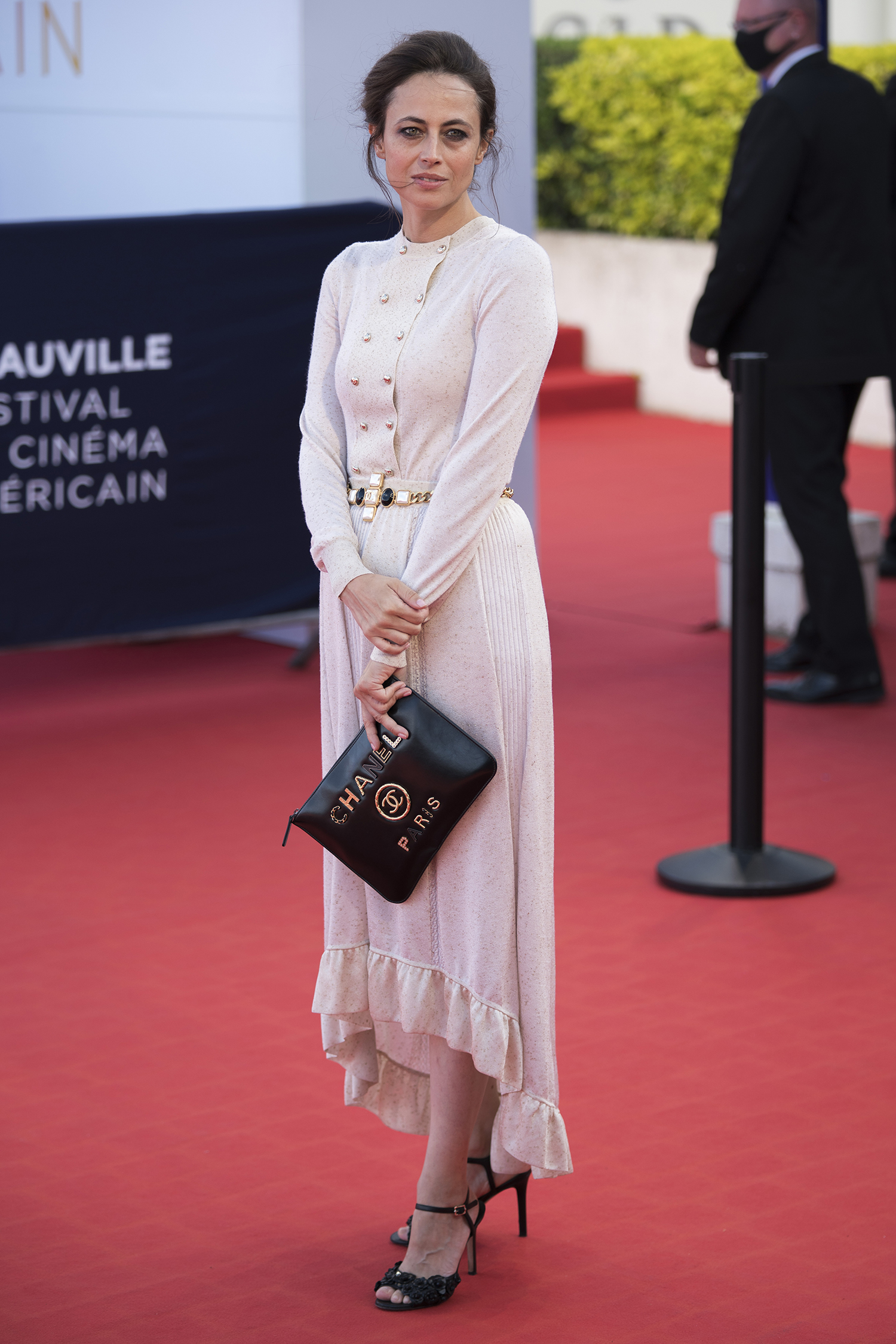 On and off screen, on the red carpets, in their daily lives or at prestigious events, the biggest actresses continue to acclaim and to embody the allure of Chanel. 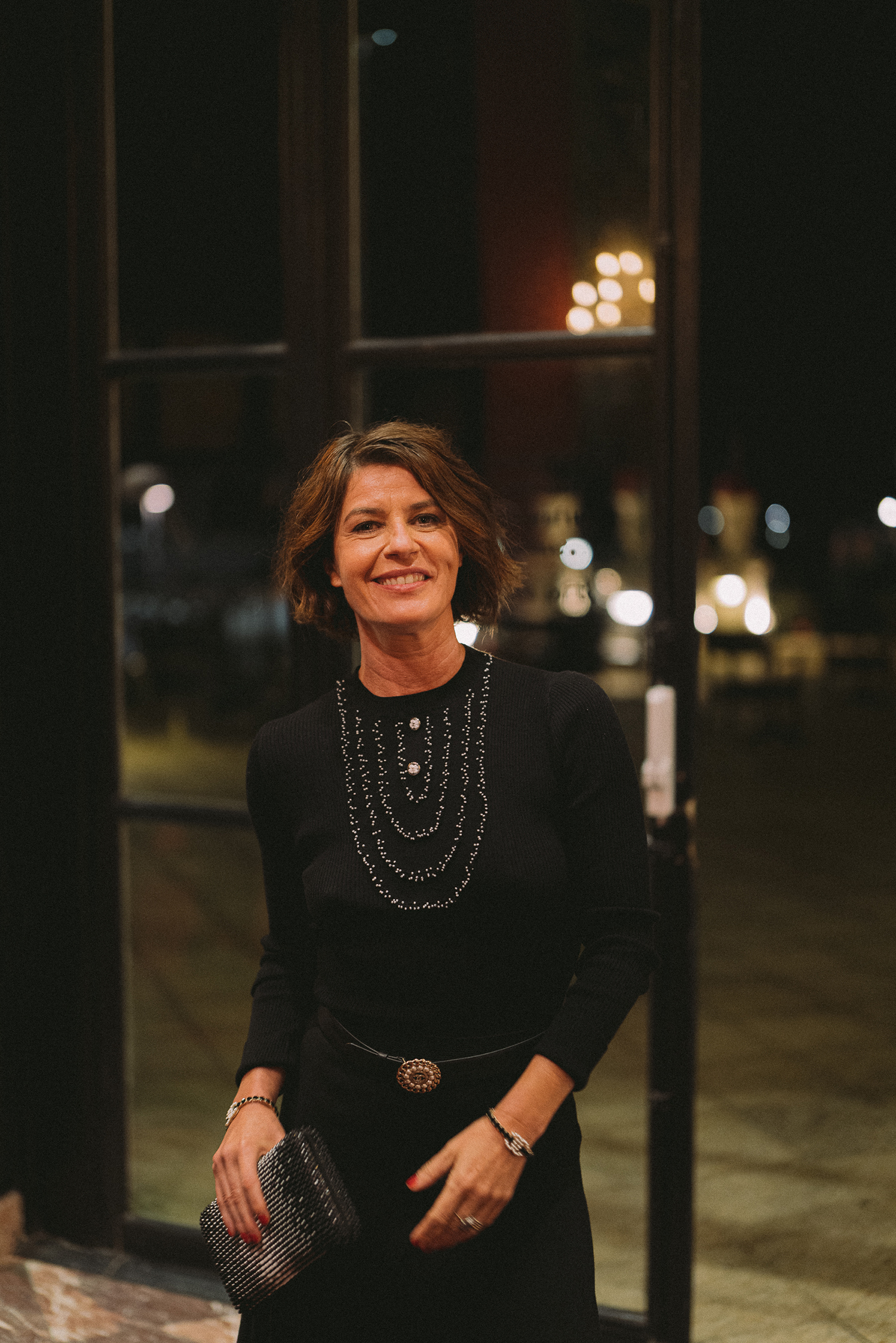 Partner of the Deauville American Film Festival since 2019, with this event the House of Chanel reaffirms its eternal attachment to Deauville and the seventh art. 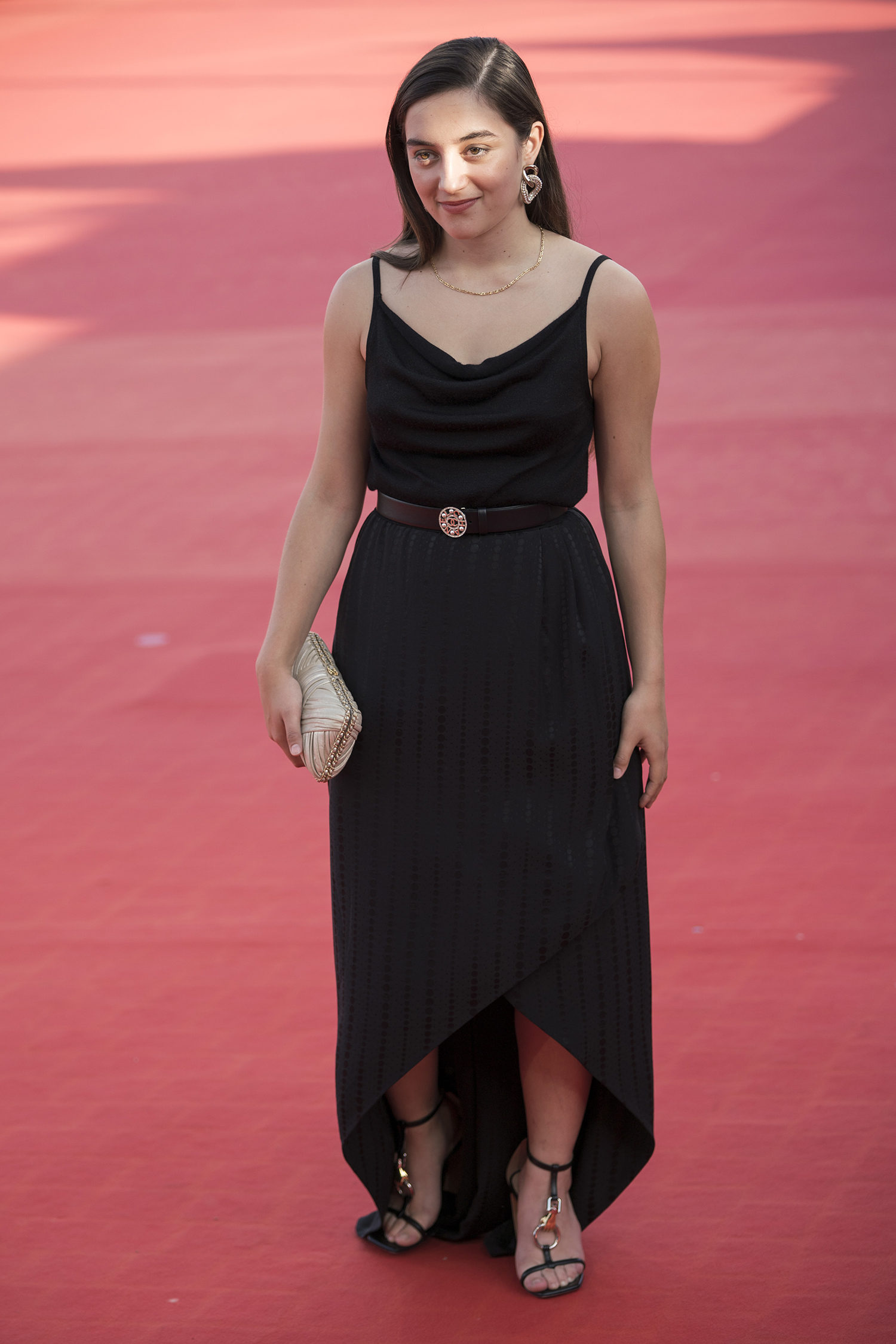 Luana Bajrami, French actress and member of the Revelation jury, wore a black silk skirt and a black cotton top, from the Fall-Winter 2020/21 Ready-to-Wear collection, with Chanel accessories, bag and shoes 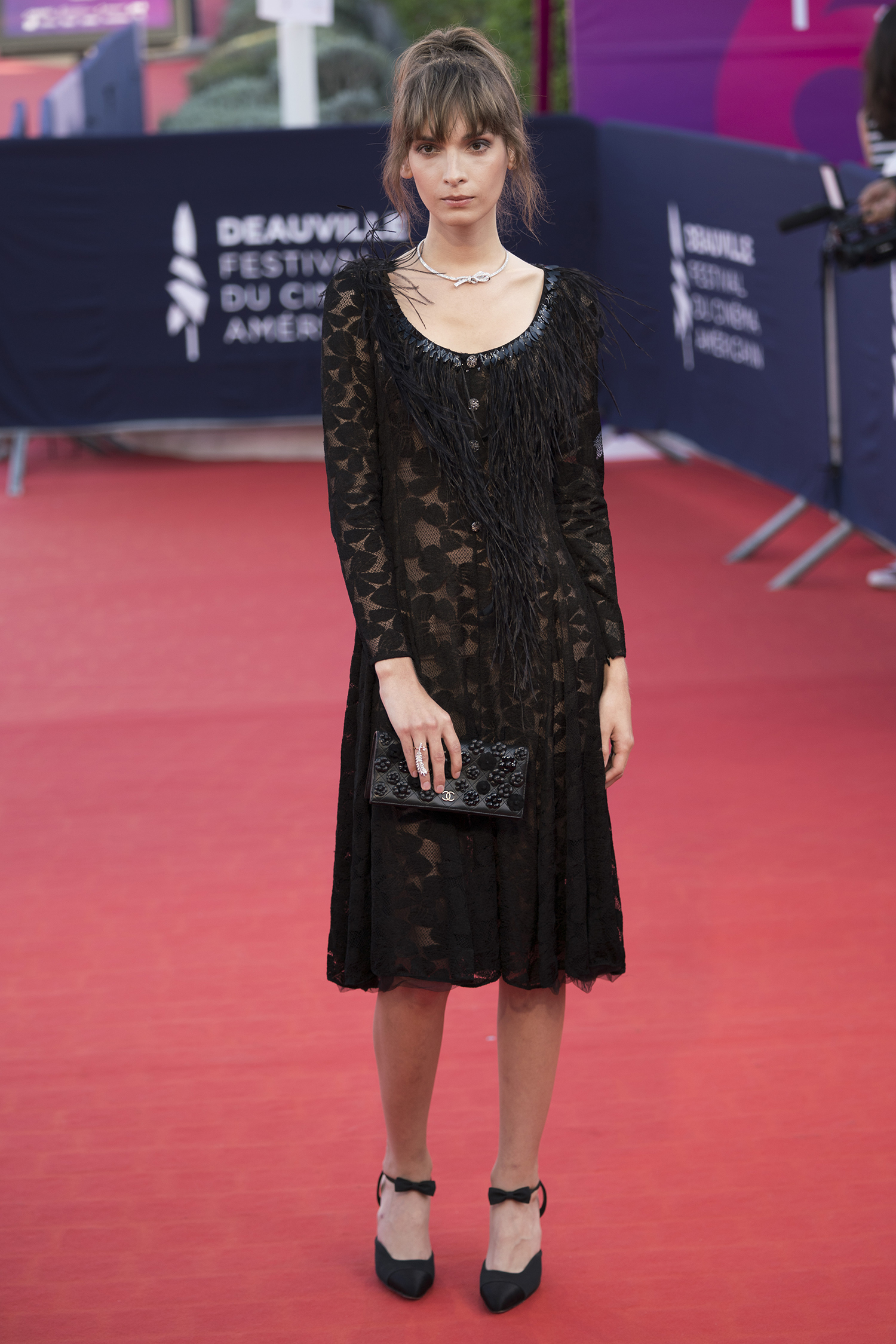 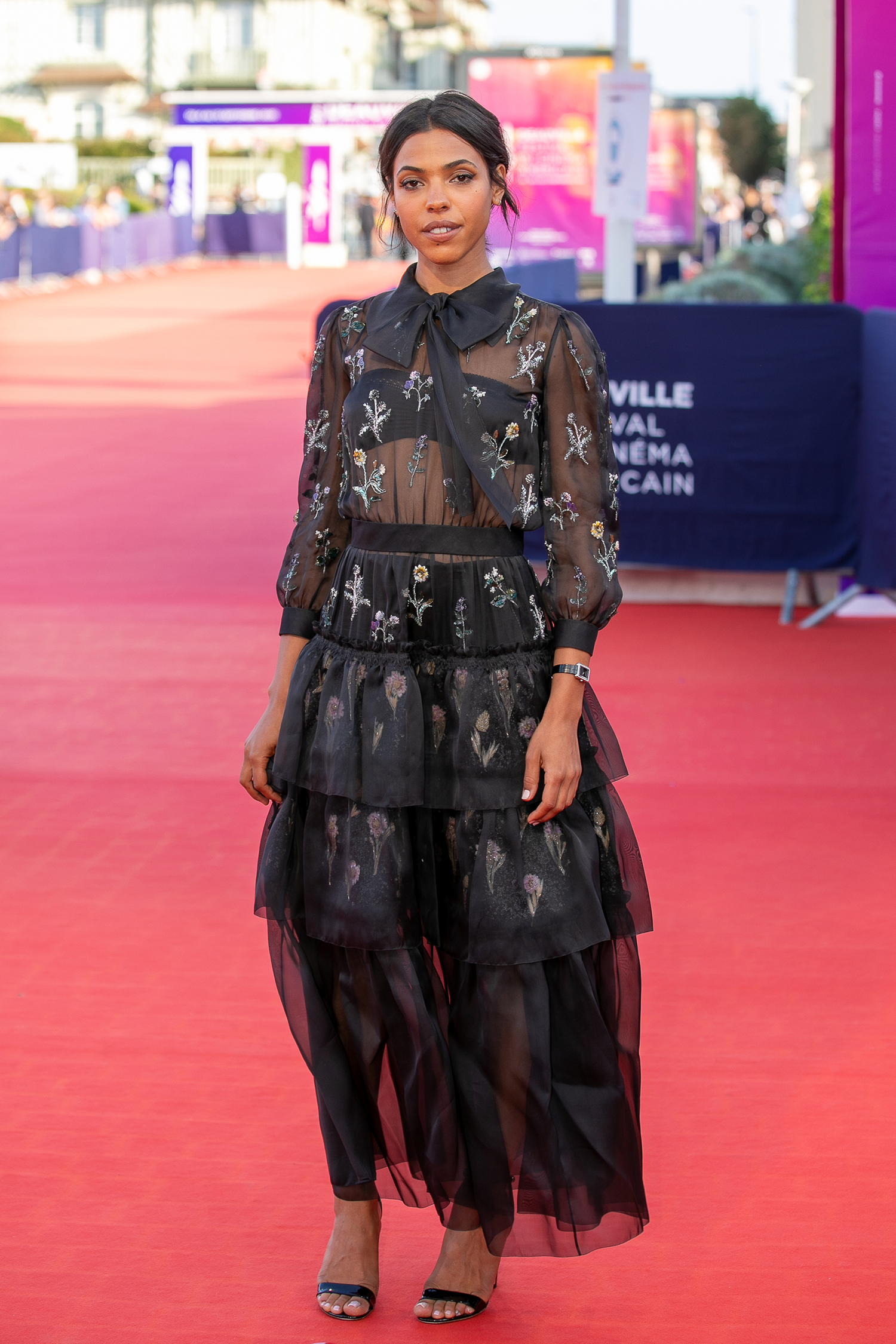 Zita Hanrot, French actress and member of the jury, wore a black embroidered silk dress with ruffles from the Spring-Summer 2020 Haute-Couture collection, with Chanel “Camélia” ring in 18K pink gold and diamonds and Chanel “Boy.Friend” watch in steel set with diamonds 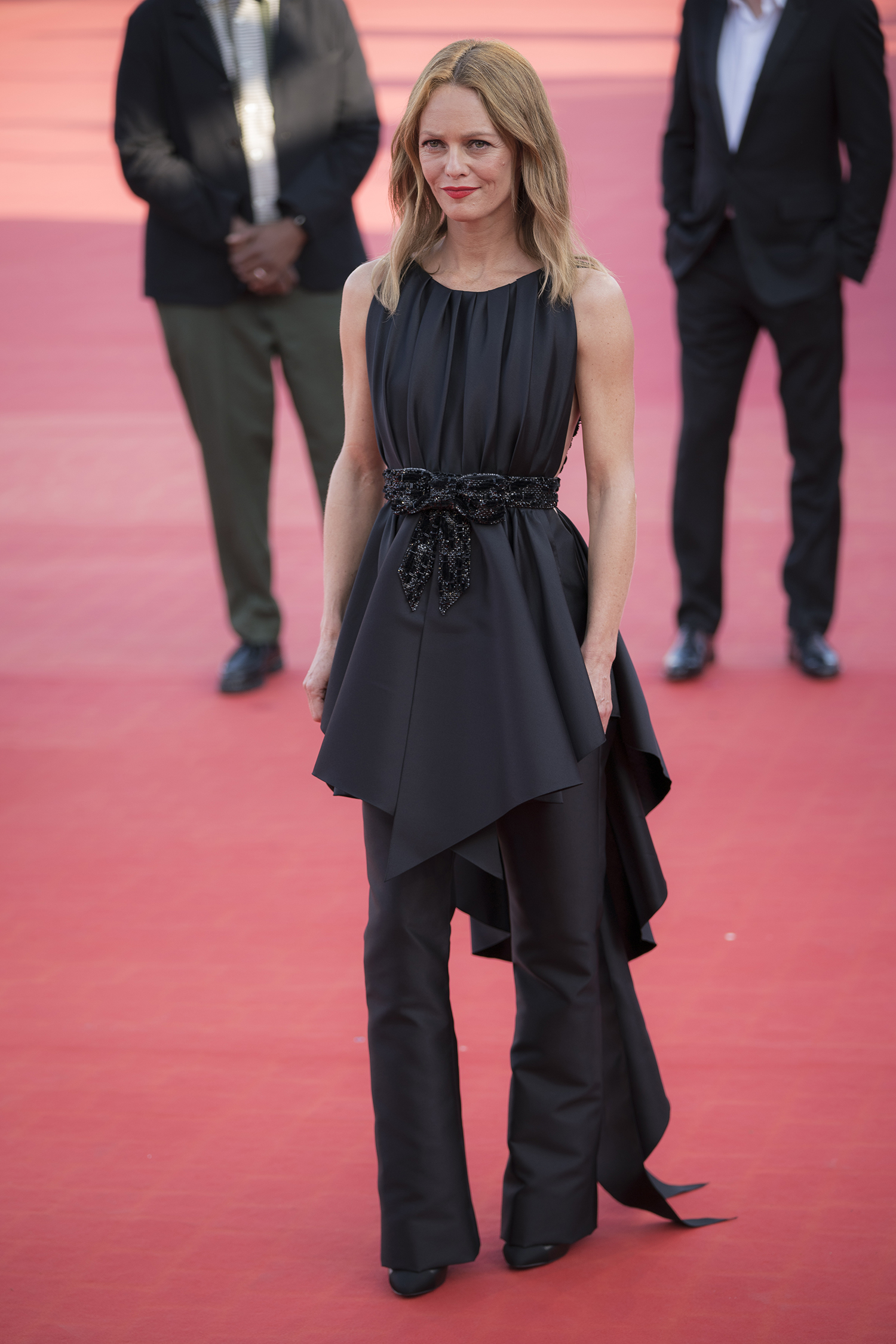 Vanessa Paradis, Chanel ambassador and President of the Jury, who received the “Distinction Numérique” from the National Audiovisual institute (INA) at the closing ceremony, wore a black silk jumpsuit with embroidered belt, straps and bow from the Fall-Winter 2020/21 Haute-Couture collection, with Chanel shoes and Chanel Comète ring in 18K white gold and diamonds