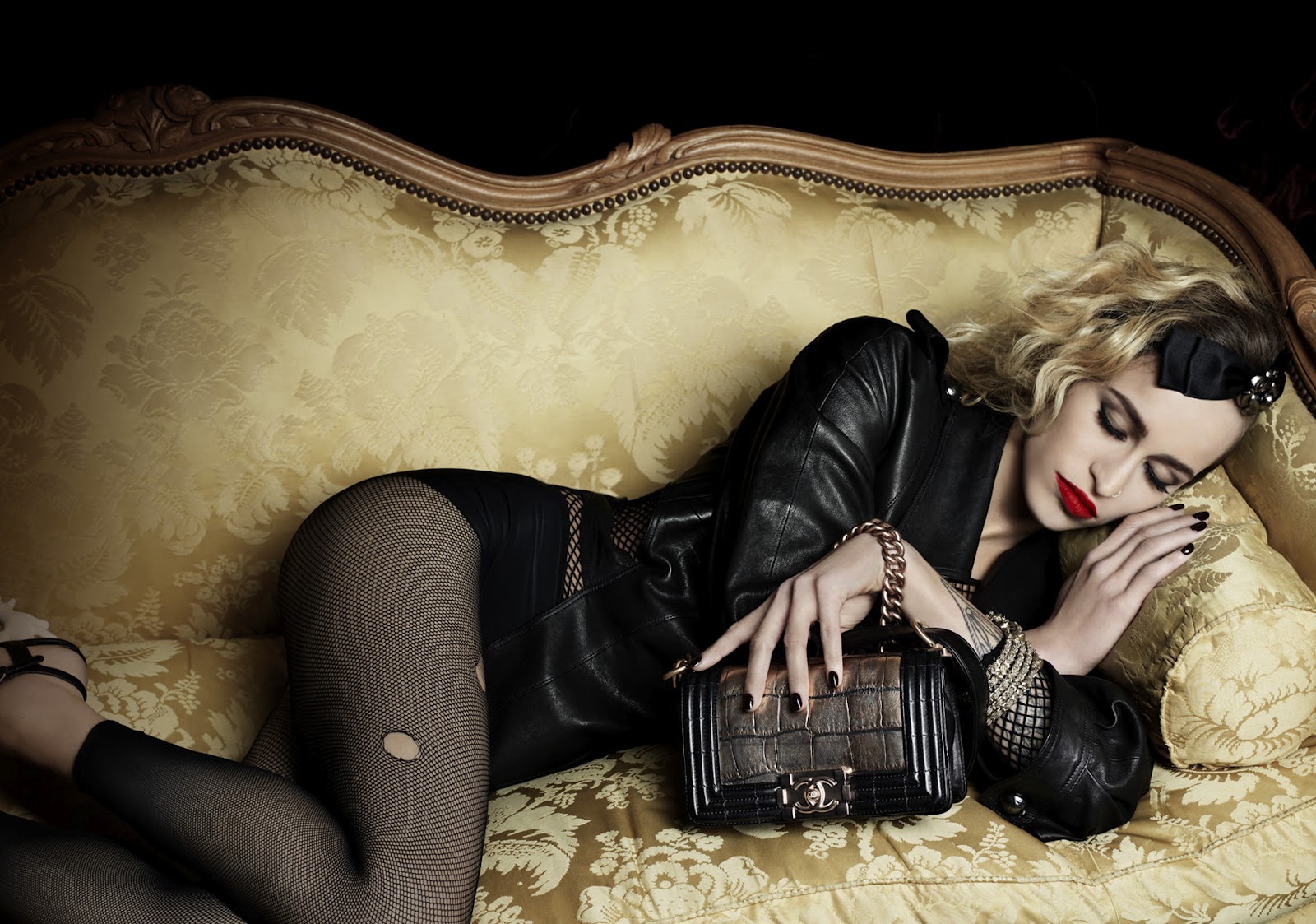 Some objects don’t need time to impose themselves. In the image of the legendary 2.55, the Boy Chanel handbag is one of them. It’s become part of the family of emblematic Chanel bags, with its singular and racy look. Launched by Karl Lagerfeld for the Fall-Winter Ready-to-Wear 2011/12 collection, Boy Chanel has ever since been revisited by the designer each season. A true fashion accessory, of inescapable luxury, the Boy Chanel associates know-how with modernity and answers to all the values of excellence of the House. 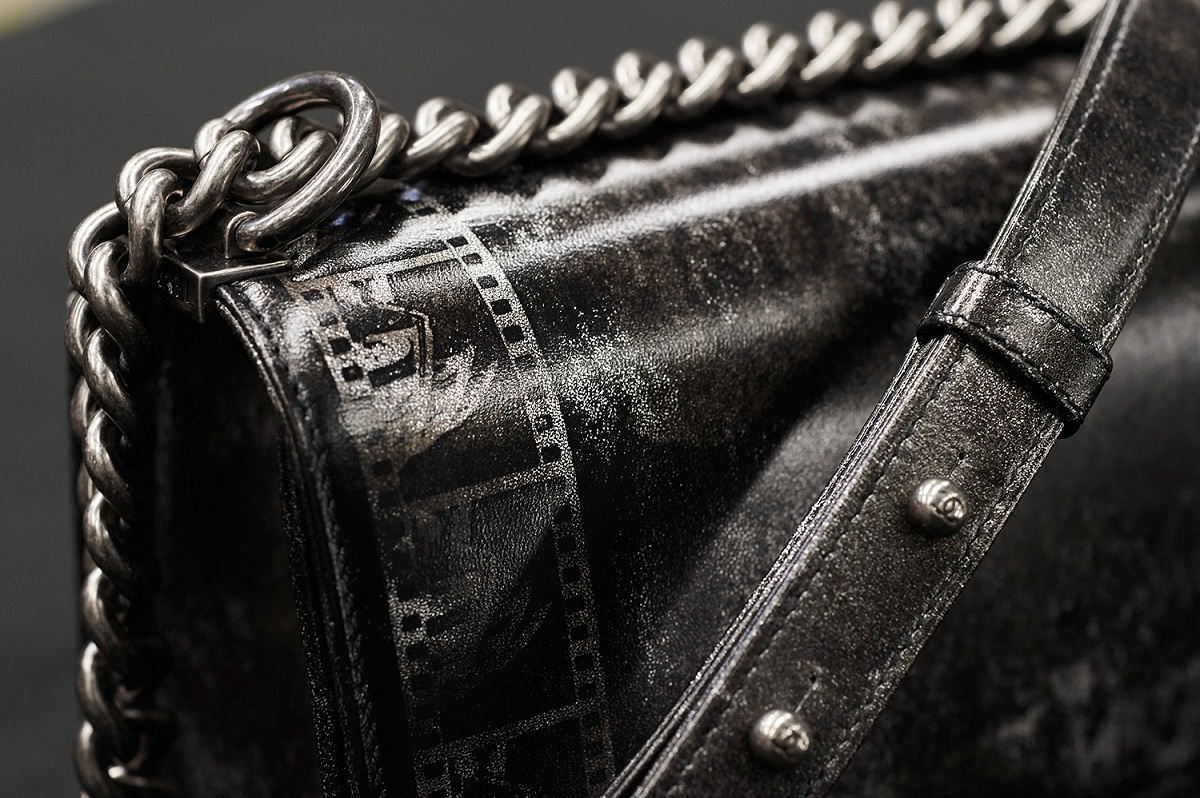 The pure and avant-garde esthetic of the Boy Chanel paves the way for a new look, an attitude in keeping with Gabrielle Chanel. Karl Lagerfeld was inspired by the hunters’ cartridge pouches that Mademoiselle would wear on her shoulder to create the Boy and anchor it firmly within a heritage. Curb chain made up of large rounded links of metal or patinated ruthenium, rectangular flap, and a graphic clasp: the Boy Chanel goes straight to the heart of what’s essential with an androgynous elegance. “Chanel had this attitude, it’s the very spirit of Chanel. She’d picked it up from Boy Capel, the great love of her life… Indeed, the bag’s called Boy Chanel”, explains Karl Lagerfeld. 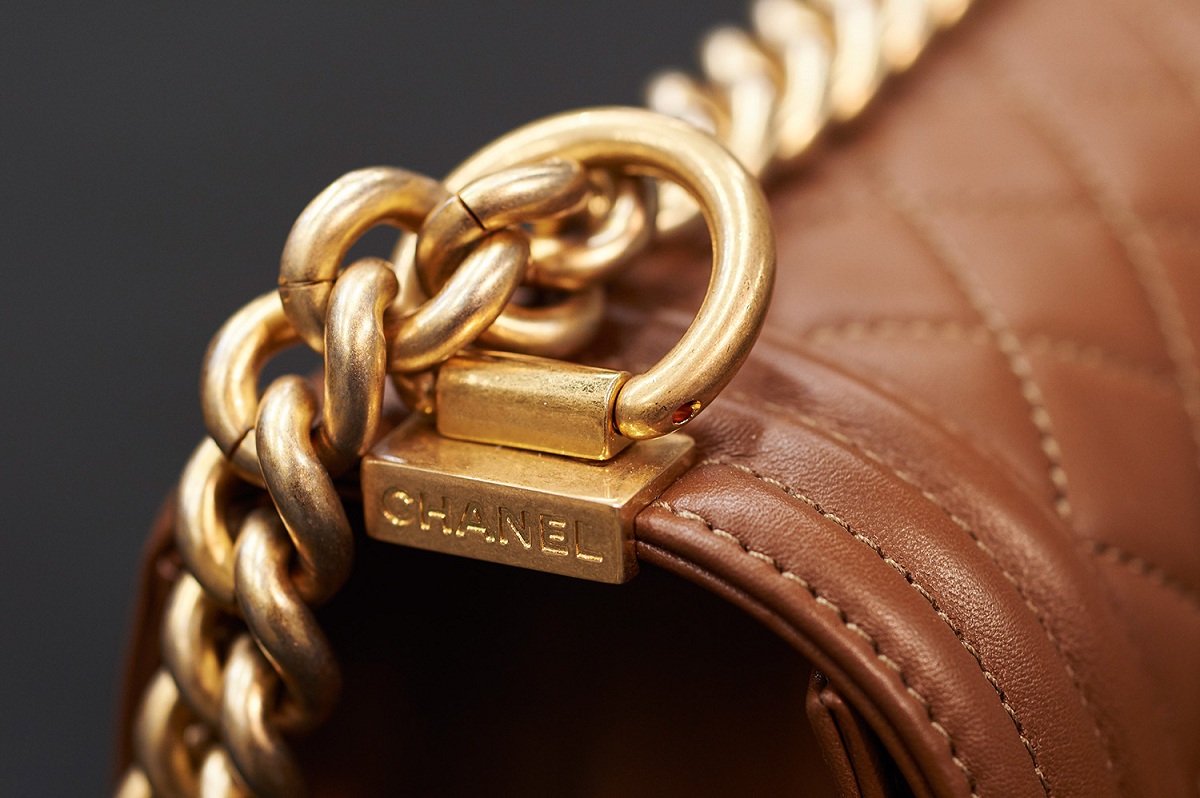 Clad in glazed black calfskin, muted red, intense green, lead green or ivory, quilted with stitched graphic bands, the Boy Chanel plays the nonconformist card under Karl Lagerfeld‘s creative direction. Unicolor, bicolor or tricolor, in velvet, varnished leather, smooth or in diamond quilted lambskin, its flap refined with shagreen, alligator, Orylag, tweed and chain, its corners capped with chiselled metal plaques, its clasp sprinkled with the Constructivist spirit… Python, aged, iridescent or distressed goat leather have also been used in this universe. The Boy Chanel bag has taken on a multitude of formats from the mini to the maxi shoulder bag, always adorned with a multitude of colors, flexible or rigid, and can be worn on the shoulder or across the body, long or short, celebrating as such the masculine-feminine stance that is so important for the House and for its creator. 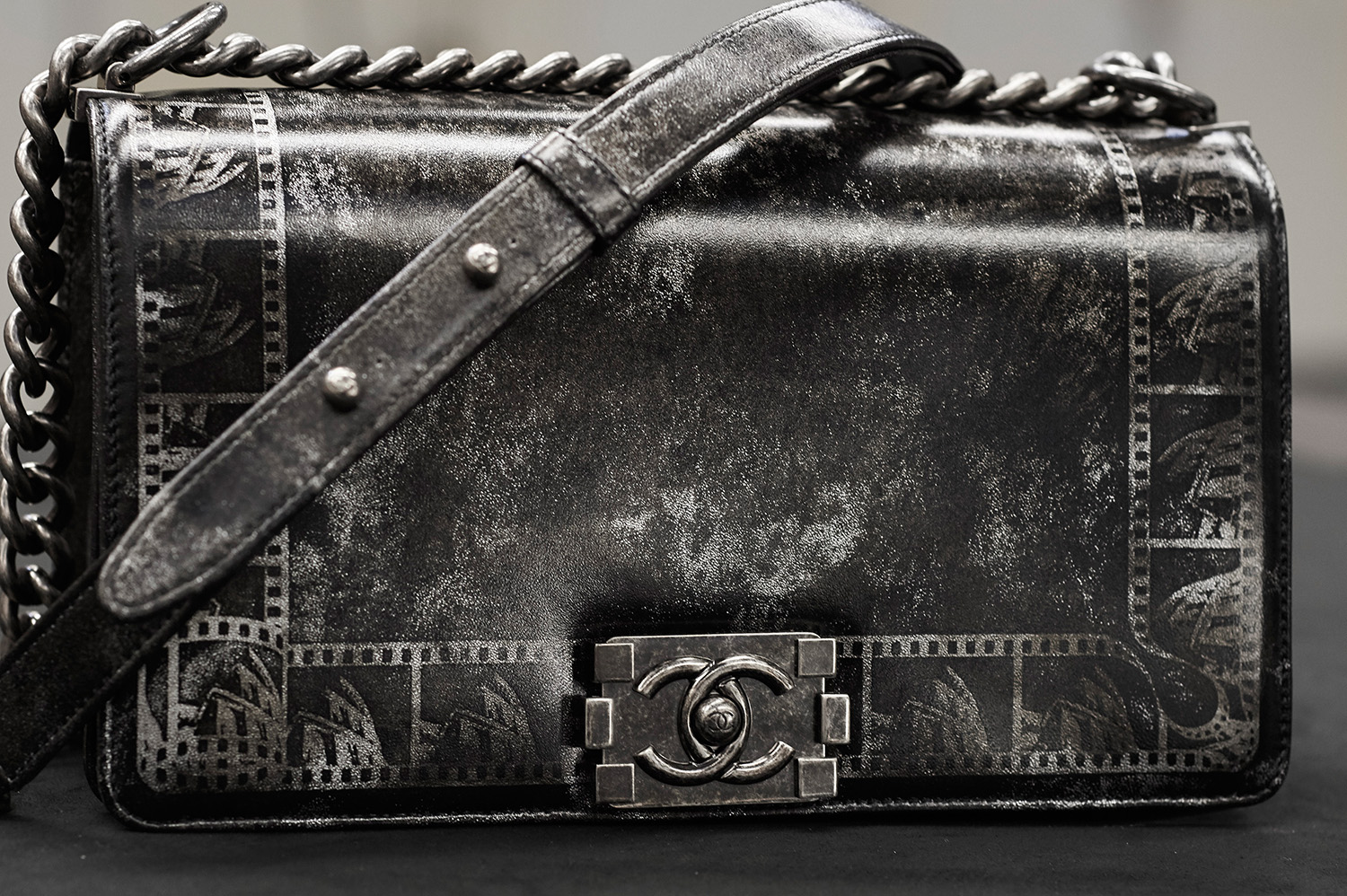 Karl Lagerfeld chose Alice Dellal to represent the Boy Chanel for its publicity campaigns. Alice Dellal is ultra modern, expressing all the freedom and audacity that characterizes the Gabrielle Chanel style. 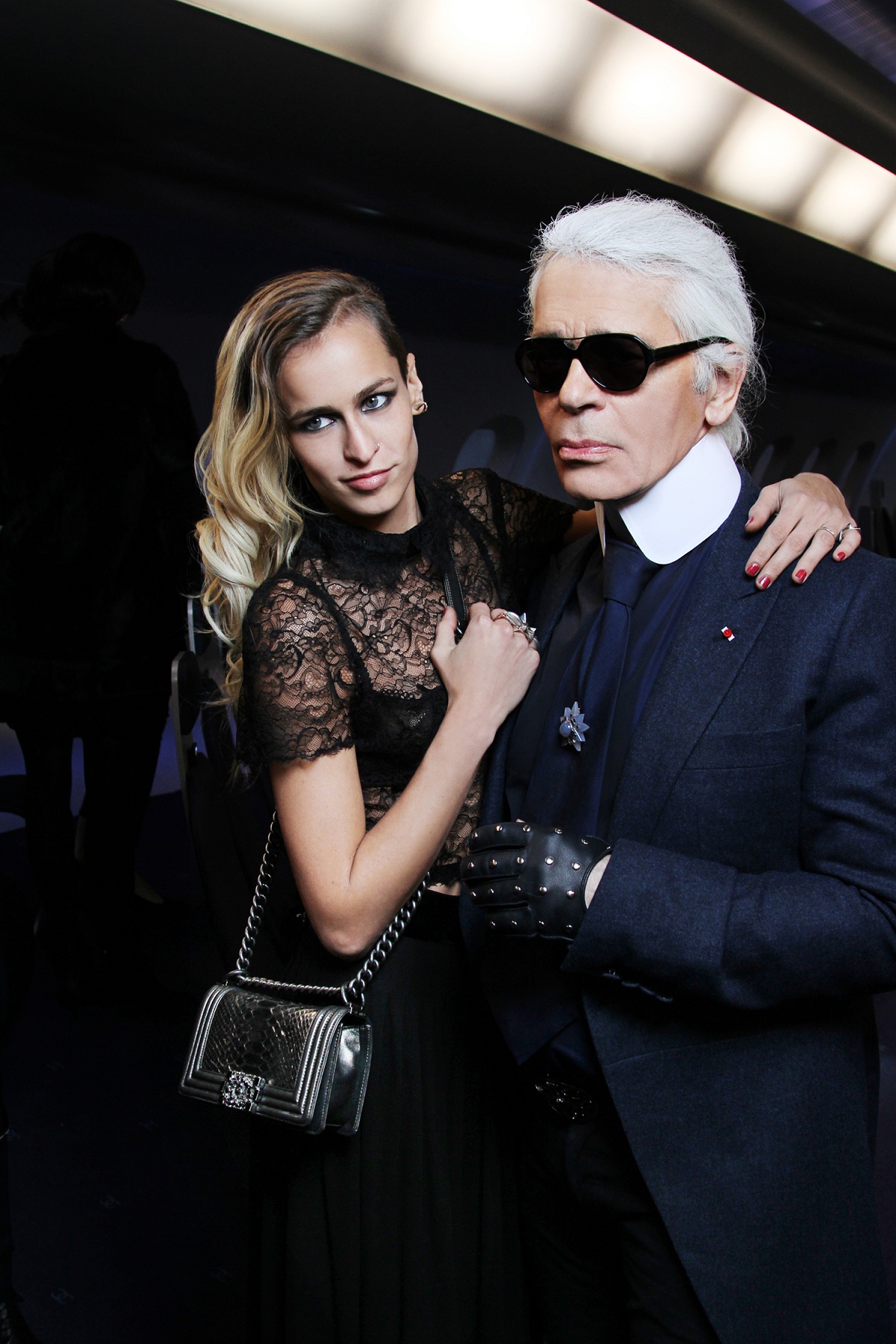 The campaigns resume the spirit of the bag perfectly: one is very rock’n’roll and avant-garde, photographed in a Parisian apartment, the other, in black and white, in a stud farm which reminds one of Gabrielle Chanel‘s love of equestrian sport. “It was Gabrielle Chanel‘s early life which inspired the campaign. She had a friend called Etienne Balsan, in whose house she lived. He reared horses there. Everything that happened there was linked to horses and equestrianism and she became a very good rider. I was inspired by this period in Gabrielle Chanel‘s life and thought that Alice would be perfect to represent a modern version of this horse rider. “

At first glance, a bracelet that sparkles around the wrist. A jewel. Initially, one recognizes the clasp of the 2.55 bag. This jewel is a code. Then there are two hands. This code is a watch. The eyes then glide along the quilted...

This season, Karl Lagerfeld projects Chanel into space. In the Centre de lancement N°5 décor in the heart of the Grand Palais and at the foot of an immense 37 meter-high rocket, 90 models reach for the stars wearing boots...

The Paris Cosmopolite 2016/17 Métiers d'art collection takes the Ritz Paris for its décor, a setting cherished by both the House of Chanel and its founder Gabrielle Chanel. For this occasion Karl Lagerfeld affirms his attachment...