Home » FASHION » Shane LaVancher: “My aim is to provoke viewers”

Shane LaVancher: “My aim is to provoke viewers” 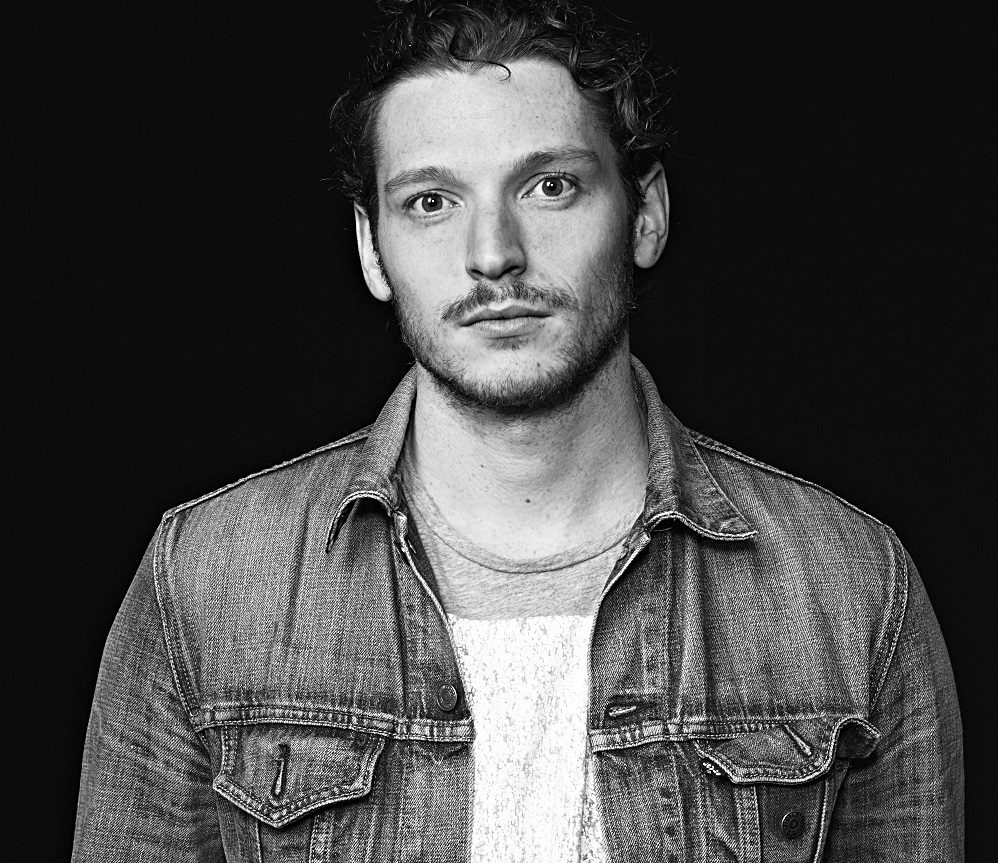 Shane LaVancher is a fashion photographer that lives and works in New York City. The first thing that struck us about Shane’s photography was the creativity involved. His vision extends beyond the realm of the camera, creating images that resemble paintings, making us look past the image itself. They are dreamy, whimsical, and sometimes a little sinister. Shane’s photographs have been seen in magazines like Vanity Fair, Interview, and Paper Magazine. Some of his fashion clients include Kenneth Cole, Cynthia Rowley, and 3×1.

When did you first become interested in photography? What sparked it and when did you decide that it was what you were going to do?

I was 17 when I learned to use a camera. Once I learned how photography worked, I became intrigued with the process. I was shooting 35mm film and processing it in my high school darkroom. My subjects were almost always people. Even before I was shooting, I was drawing or painting the human figure. There’s so much you can say with a human face and body. I was curious to explore that more. Actually, I’ll always be curious about that. 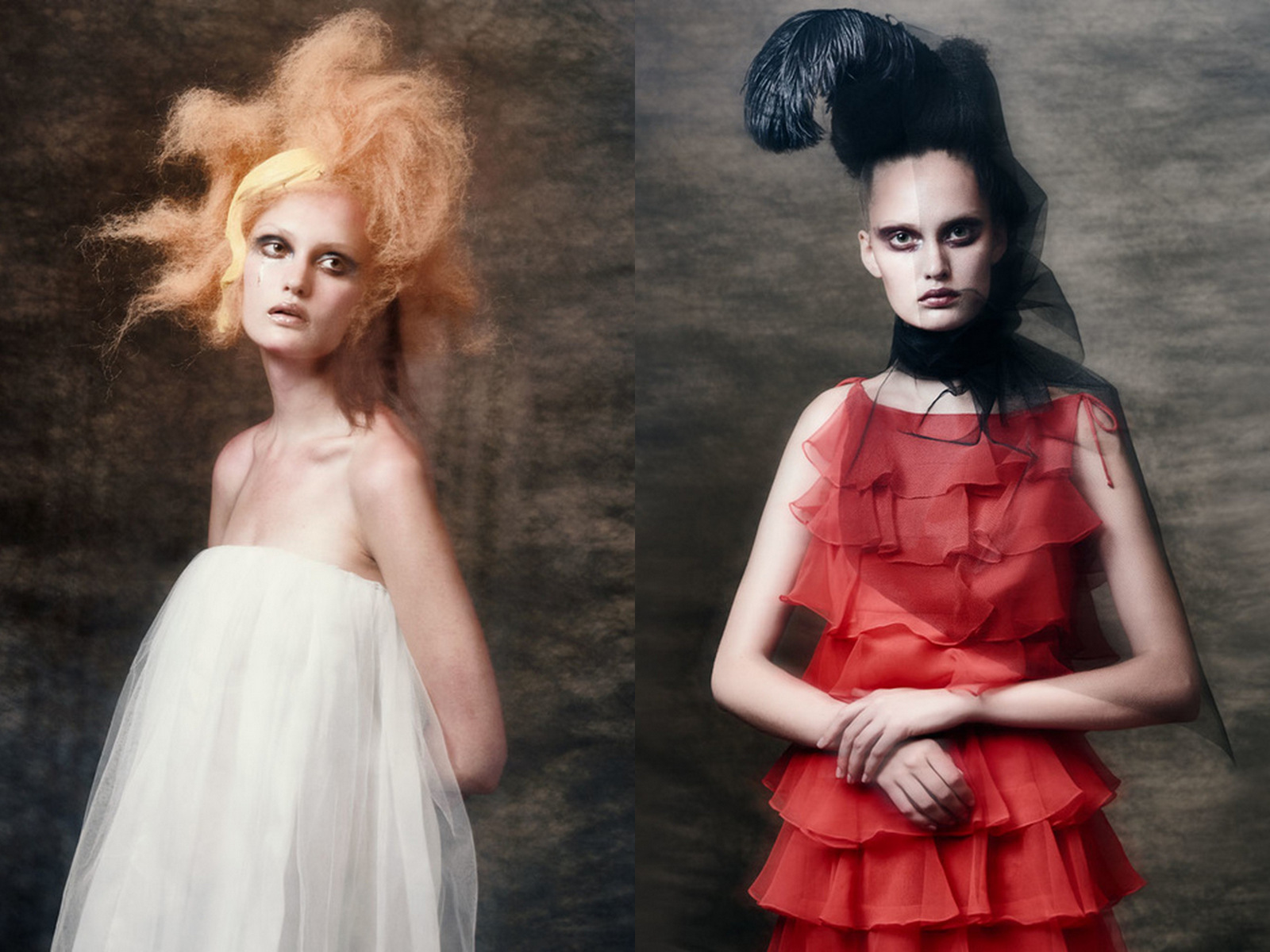 What does fashion mean to you?

It’s a loaded word. There are a lot of great things about fashion and its history, and there are a lot of not so great things about fashion today. I try to concentrate on its aesthetics and creative side. Thankfully the cliché of fashion creatives being vicious and ruthlessly judgmental is becoming retro. I’m not saying they don’t still exist though…

How would you describe your photographic style?

It’s always evolving, but in the past year my commercial work has been settling into a clean, minimal aesthetic. My exhibition and personal work is not really the same situation. Although both are forever evolving… My aim is to provoke viewers into asking questions and leaving them wanting answers. It’s easier said than done. Especially while working in the world of commerce. 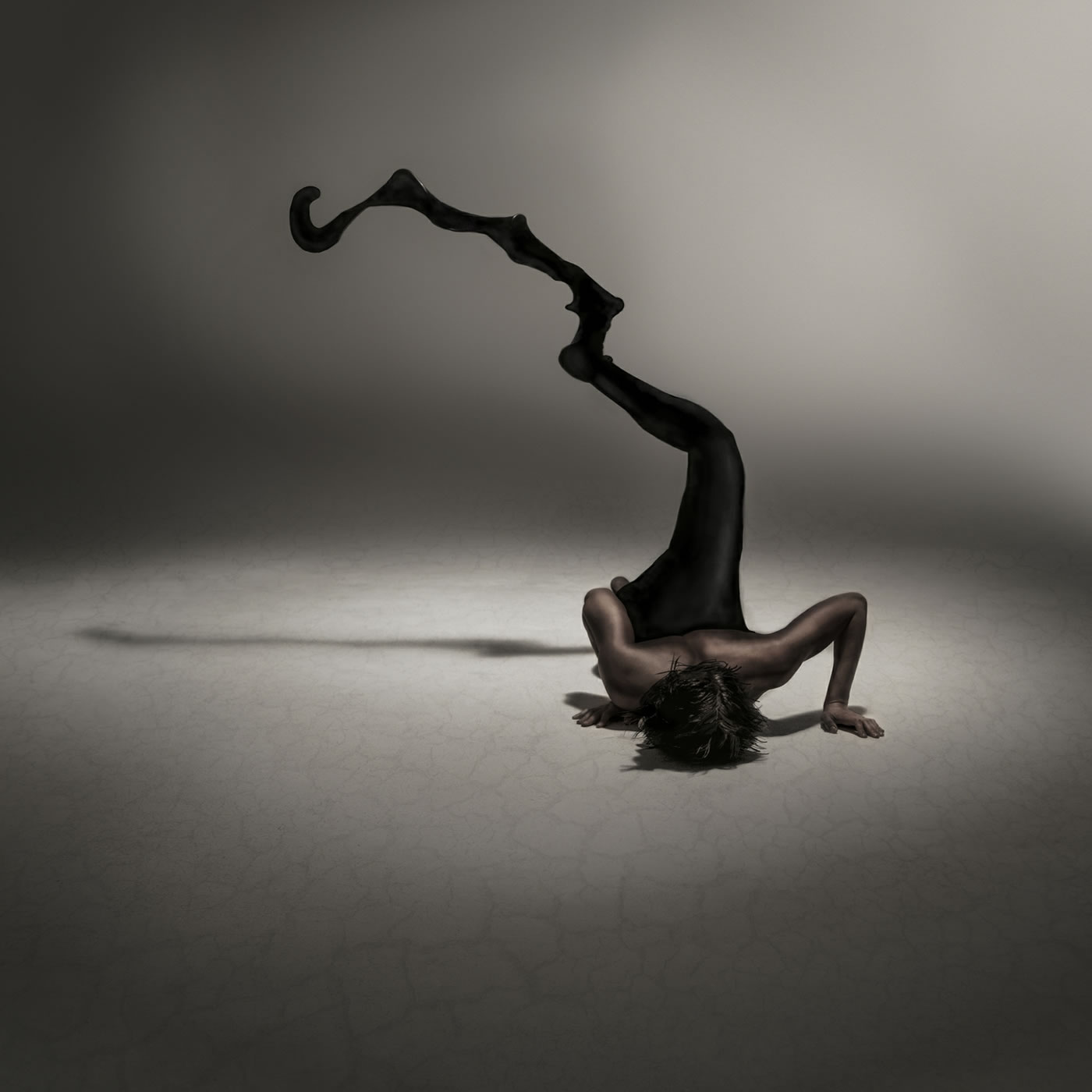 Can art and commerce really coexist?

Yes, the opportunity for this caliber of project is very elusive and almost only exist at the very top of the industry. This of course depends of your own personal idea of art. The higher your standards, the more difficult it is to be content with what you’re creating.

What is your biggest inspiration?

People. Its always been the people I interact with, work on projects with, my friends, family, artists, celebrity, etc. Whether the case, for good or bad, all of our personal interactions are influential. This is true for anyone who creates. 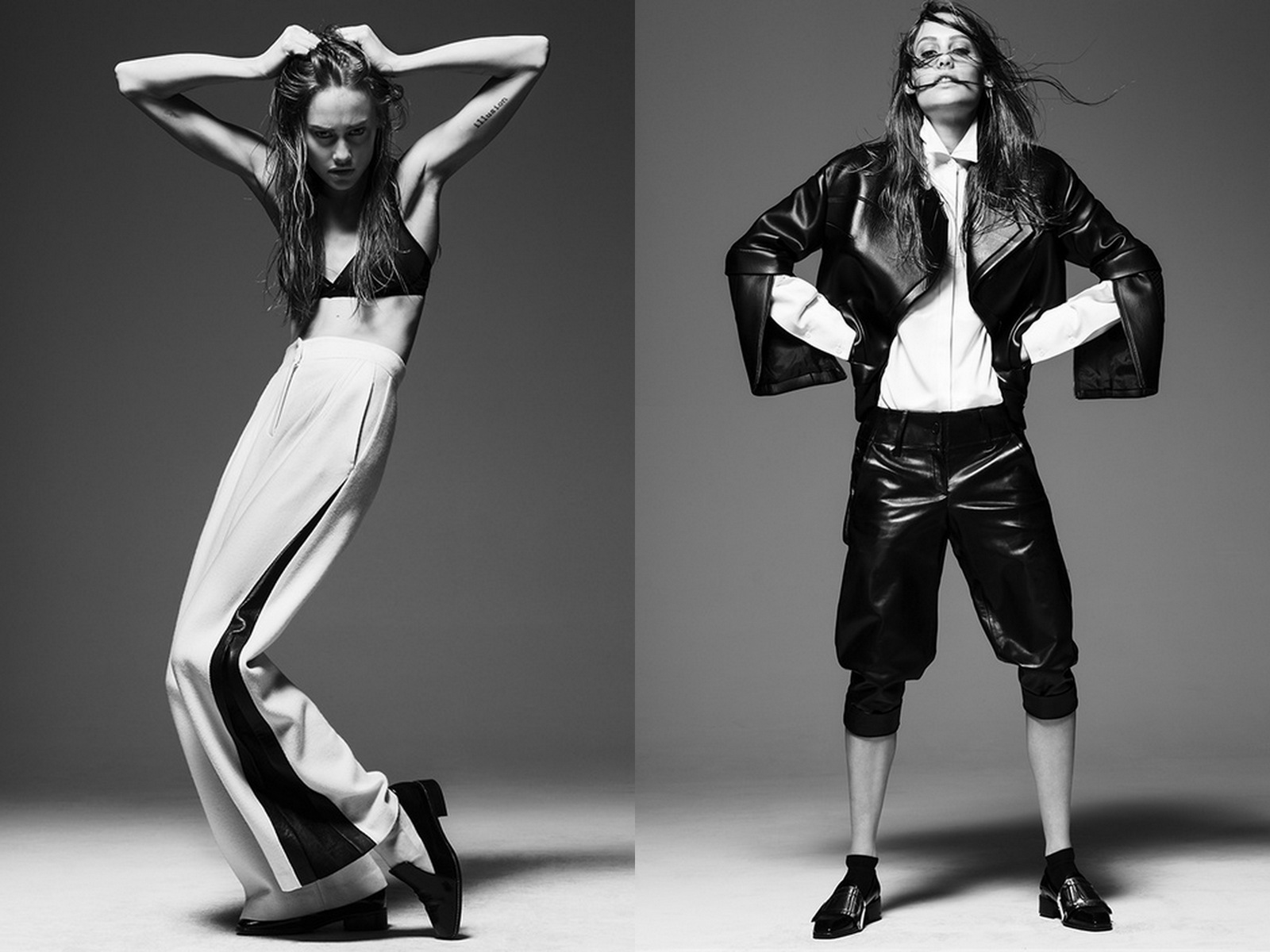 How often do you step out of your comfort zone to be creative?

It’s rare that I’m completely comfortable while working. A lot of my friends are photographers also, and it seems we all share this curse of always questioning what we are doing. Constantly trying to fix and tweak things, and then freaking out inside of our heads while we create. Especially on assignments when stakes are high, and everyone is looking to the photographer to make the magic happen. Those high pressure moments are easiest to psych yourself out. My late mentor would say ‘Diamonds are made under pressure’. The energy on photo sets are so important, and the photographer’s energy often sets the tempo. So, while I’m working with a full team on creative projects I can naturally have moments of doubt and question my thought direction. This is why developing a team that you know and trust is invaluable.

What is the biggest challenge of working in the city like New York?

New York is of course a Mecca for fashion, photography, and art. The numbers alone increase your opportunities. Of course there is a flip side of a saturated market. The challenge among all of that is finding a creative niche. The biggest challenge is in your mind. New York being home to people from all across the globe there is no shortage of specially skilled people, props, rarely seen locations, you name it.

What are some of your career highlights?

So far I’ve had two solo shows for some of my personal work. I also recently made a portrait of an artist for Vanity Fair. Her name is Nina Chanel Abney. That was a milestone for me. 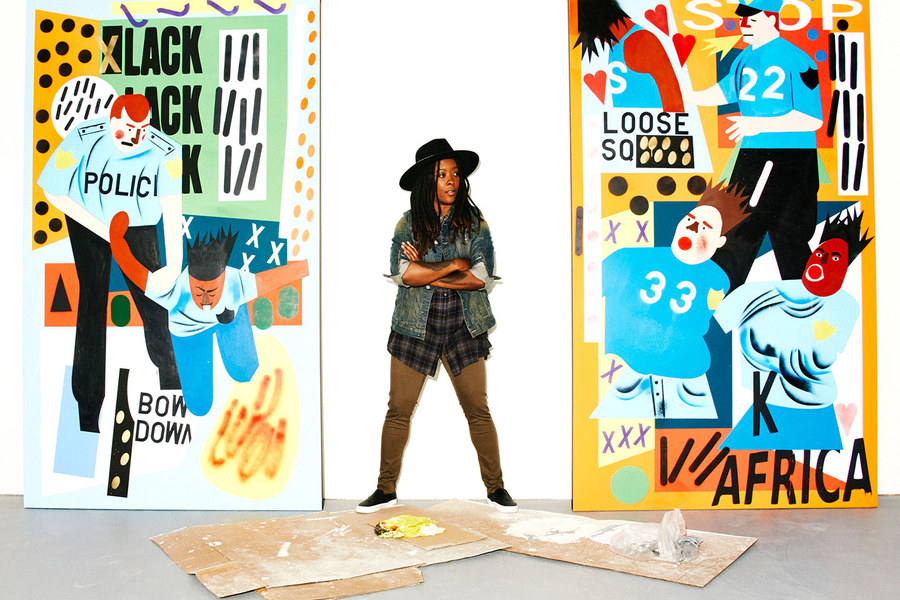 Artist, Nina Chanel Abney next to her recent work created out of her Newark NJ studio. Vanity Fair 2015

Name one quality that contributed to your success.

Describe a typical shoot. How much equipment do you typically bring to a photo-shoot? What camera do you use the majority of the time?

Sometimes it’s just a camera and natural light. Other times it’s a whole mess of lights, stands and grip equipment. It depends on what the assignment calls for. I like to compare this part to cooking. For some dishes all you need is one pan and two ingredients. Other dishes call for a bunch of fancy tools, ingredients and spices. There are so many solutions and styles to get a final piece.

How much time do you spend taking photos, versus retouching photos? Anything that you like to do in your photos in particular?

Some weeks all I do is shoot, and other weeks its nothing but e-mail and production planning. There is no rhyme or reason to schedules.

Lara Stone. I’m into her unconventional everything, as far as fashion is concerned.

What photographers from the past or present have influenced you the most?

I’ve been inspired by of course the great Richard Avedon, Irving Penn, Helmut Newton, Tim Walker, Arnold Newman, Bill Brandt, Robert Mappelthorp. One that might sound surprising is Lewis Hine. I’ve recently re-visited his work. I’m interested with his intrigue for man’s relationship with machine. Lewis Hine is remembered for taking those amazing images we all know of men working on the Empire state building at great heights with no safety gear. What most people don’t know about Lewis Hine is he was a social activist using the camera to gain awareness on unsafe working conditions in sweatshops and child labor in the early 20th century. Lewis Hine had a message, but he delivered it with visual aesthetics. Maybe it was subconscious or just innate.

What projects are you working on now?

I have an on-going portrait series of artists. I’m intrigued with artists and their process, so this project keeps me sharp and it’s rewarding. I typically go into an artist’s space and make a portrait of them where they work, where they’re comfortable. You can tell a lot about what’s happening in a creative’s mind when you enter their space. My attempt is to make an image that defines the artist as best as possible. I try to keep my approach low impact since taking a portrait can easily become invasive for people that aren’t used to the camera. I really hope the artist likes the portrait for years and years and uses it to profile themselves. I started this project in 2013 and there is no end in sight. Maybe I’ll make a book one day.

What is the best piece of advice you would give to an aspiring fashion photographer trying to make it in the industry?

Build a team and grow with them. Make friends because people are what this industry is made out of.

What kind of impact do you hope to make in the fashion world?

Making images that inspire people and change their chemistry, even just for one second is fine.

Jay Kos: You can not fake cool

Everything is possible in the city like New York, especially if we observe fashion and particularly men’s fashion. If we look globally, Italians are known for the dandy look, sleek and fashionable suits carefully paired...