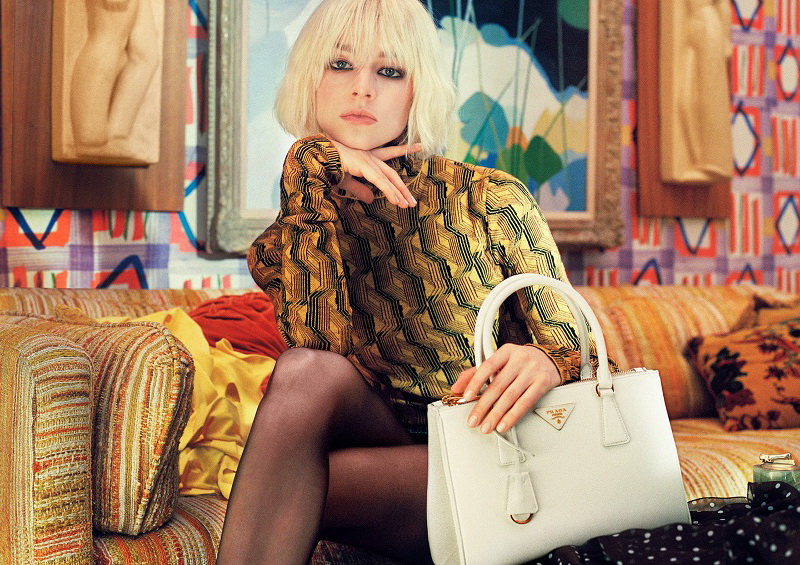 Fashion is about imagination –newly created, constantly augmented and painstakingly crafted every day by the industry, with care and love. Yet the magic of the fashion industry is easily overlooked, forgotten –familiarity allows complacency. A reminder of the purity of those dreams, of that magic, is the intention that guides this new Prada moving image campaign: a new character, Hunter Schafer, and a filmmaker, Xavier Dolan, are invited to examine the timeless Prada Galleria handbag with no preconceived expectations. From the outside, looking in, they capture the eternal dream of fashion anew.

Without preconceptions, complete freedom is afforded: Dolan was given the independence to create, to direct his personal vision of the universe of fashion, and the identity of the Prada Galleria.The campaign draws inspiration from a ceaseless fascination with the iconography of our industry. Dolan’s cinematic short seems to explore different aspects of this dream: of filmmaking, and of fashion. Each is multi-faceted, many-angled -a reflection of the obsession of our age for shifting, endlessly, from idea to idea -from repose to dynamic action, simplicity to complexity. There is no singular narrative, rather a sequence of micro-narratives, like captured thoughts, loves, emotions or dreams, in constant dialogue with one another.

The heartbeat of those dreams is fashion, viewed from the outside. Embracing the codes and tropes inherent to the world of fashion, the film has a purity, a naivety, joy. They reflect universality: archetypes of fashion shoots, as envisaged by many, innocent and optimistic, idealized and idolized.

Schafer is our heroine -a romantic, a young girl imagining her place within her different fantasies. We leap from her bedroom, to imaginings of a fashion shoot, universal reflections of fashion as imagined in the popular consciousness, an escape from her reality. But that reality could itself be a dream: these scenes are contradictory framed by the apparatus of filmmaking, contained within cinematic sets that evoke the dream factory of Hollywood, another source of endless enchantment, like the world of fashion she imagines.

A constant presence, Schafer’s fixation -her fantasy -is the Prada Galleria, a talisman of fashion. The bag is a classic, whose character is constantly reinvented, reimagined, reinvigorated, as diverse and multifaceted as a cinematic heroine. Change, contradiction, evolution -always and never the same. The Galleria bag here is reimagined in different contexts,differing locales and visions, jolting between imaginary scenes and scenarios, between multiple micro-narratives, like fragments of thoughts, hopes or wishes.

Both cinema and fashion transform fantasy to tangible reality: films bring fiction to life, give their directors’ hitherto imagined visions a physicality. We, as an audience, can share their wildest desires – while actors like Schafer give credence to the make-believe, imbuing heroines with not only a literal presence but an honesty, a purity, a truth. A great actor can inhabit their role like a dress, and make it part of them. And likewise, fashion also creates actuality from inspiration -objects, precious and charged, which can then be owned. We can touch and feel fashion’s fantasies, see them and share them. They can become ours. A celebration of the joy of fashion, framed through the art of filmmaking – a dream, within a dream.