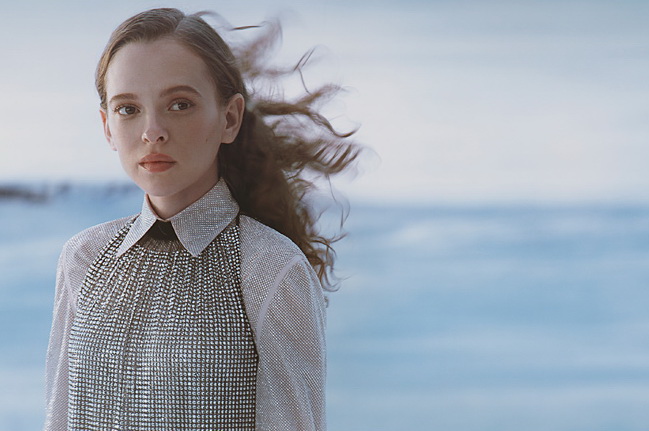 Cinema is a fantasy: acting a craft, like fashion, that brings dreams to life. For the Prada Holiday 2021 campaign, ‘A Midwinter’s Night Dream’, a cinematic dreamscape is created using ground-breaking technology, transporting both stars and audience.

Cinema has always inspired Prada – evocative of complex storytelling, further narrative and deeper meanings. In an evolution of Prada’s heritage of campaigns featuring leading Hollywood actors, four new talents debut for Holiday 2021: Julia Garner (Ozark, The Assistant, Inventing Anna), Shira Haas (Unorthodox, Asia), Louis Partridge (Pistol, Enola Holmes) and Taylor Russell (Waves, Bones & All). They are captured in a winter’s scene as they quest across a frozen terrain – revealed as Los Angeles, fantastically engulfed in snow. Dressed in a collection designed for celebration, they move towards a joyous gathering – a definition of the holiday season.

Fusing together film and fashion, this short movie is based on an original story and script by cult screenwriter and director Mary Harron (American Psycho, The Notorious Bettie Page, Daliland), and is directed by Glen Luchford – a talent who has worked with Prada from the 1990s through to today. In a further crossover between creative realms, the campaign’s imagery is drawn from film stills – presented as bold cinematic panoramas, each captures an enigmatic moment.

Stories of voyages are constantly told through cinema’s rich history: here, they are brought to life with cutting-edge 21st-century technology. ‘A Midwinter’s Night Dream’ utilizes the Volume, a virtual effects tool originally engineered for The Mandalorian – an immersive experience composed of a curved cocoon of glowing LED screens. The Volume is – like the story – transportive, recreating environments, inventing new realities.

Fashion and moviemaking unite in their wish to convey a story, one that brings people together in shared experiences. The Prada Holiday 2021 campaign is a celebration: of cinema, of fashion, of community, and of dreaming.