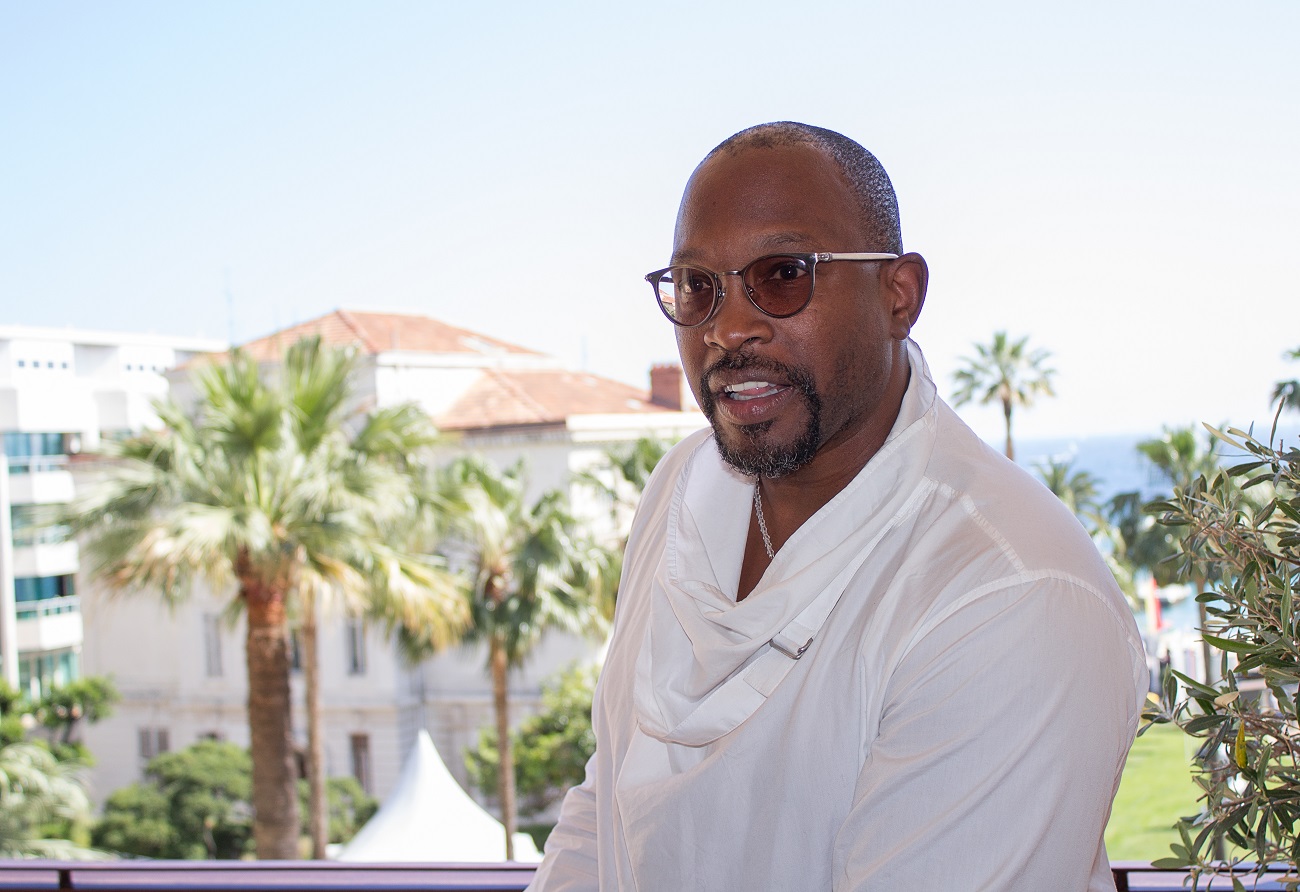 New York-born painter and sculptor Chaz Guest visited The 69th annual Cannes Film Festival to attend special event where he performed live painting of jazz pianist Eric Lewis – also known as Elew. Guest is well known for his love for art, Africa and Japan and its culture. Often he may be seen wearing Japanese traditional clothes and that slowly became his signature style. So no wonder that during this year’s Cannes Film Festival he wowed us dressed completely in Japanese traditional clothes made especially for him by artisans from Kokura. We used this special occasion to discuss his admiration for Japanese culture and heritage that has great influence on his work and style.

“I have sought to include a level of high discipline to my life. I came across the way of Bushido or Budo when I was 15 years old watching the Japanese gymnast Shun Fujimoto and his team win the 1976 Olympics. Fujimoto San sacrificed his leg so that the team could win the gold. To this day I sacrifice much to create art as I do. Even coming to Cannes to paint a great pop jazz pianist Elew, in this wonderful villa here, I carried all of my paintings and tools myself, with my fingers feeling like they would fall off. I still love the struggle part of the work! West Africa, for me, has very similar artistic and esthetics aspects that inspire my life and art. I love tradition I guess”, said Guest.

One of the most striking elements of Guest‘s work is the three dimensional effect he achieves by painting onto unorthodox surfaces. During one visit to Japan, he was so impressed by a comfortable pair of Zōri sandals that he ordered a few dozen more and mounted them onto a canvas…so he could paint on them! These paintings are in his Geisha Series. But, the same Zōri sandals and kimono are also Chaz Guest‘s favorite attire which he received by artisans from Kokura.

In the small village of Kokura near Fukuoka, in the south of Japan, six artisans are making Zōri sandals, flat and thonged Japanese footwear made from woven straw, which usage goes way back to the Heian period (794-1185). Chika San and her family and friends, an experienced craftsmen, are using traditional methods in production. They harvest straw and then dry it on the beach. These sandals are pretty similar to the popular flip-flops (originally from New Zealand), but the thong (hanao) is attached symmetrically, so there is no difference between the left and the right sandal. As a way of more formal dressing, Zōri sandals are worn with white tabi socks and combined with traditional kimono. That is exactly how famous painter wore Zōri sandals with special kimono made with Kokura-ori. 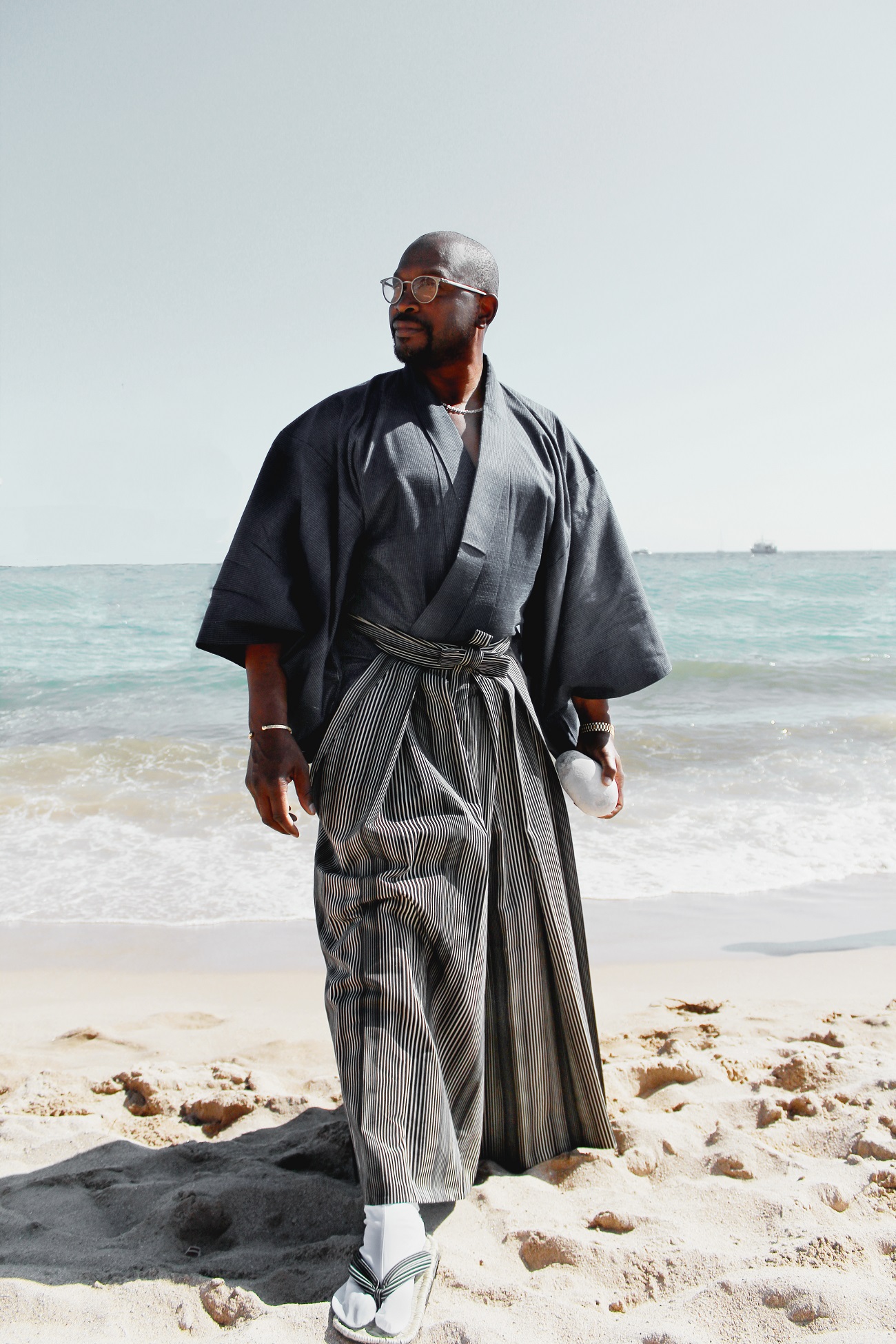 Chaz Guest on the beach in Cannes

Kimono is divided into two types depending on when the silk yarn of kimono is dyed: Some and Ori. Some means dyeing: the yarn is dyed after it is woven into a kimono. Ori means weave: the yarn is dyed before it is woven. Kokura-ori textile was first produced at the beginning of the 17th century. Kokura’s artisans created a unique fabric with vertically striped cotton cloth that was prized throughout Japan to make the hakama (a long pleated skirt worn over the kimono) and the obi (a broad sash for the kimono). Woven by using traditional technique of hand weaving. The fabric is thick and strong and with a smooth texture and is characterized by its beautiful vertical stripes. The use of many warps creates unique gentle color gradations, giving the vertical stripes a three-dimensional effect. Because the vertical threads are three times thicker than the horizontal ones, the stripes stand out clearly.

Like a modern samurai, that no one expected to see, Chaz was an extraordinary vision during the Cannes Film Festival that made people literally stop. It is sure that this is not the last time Cannes will see Kokura’s artisans master-crafting. Next year Chaz Guest will be featured in a documentary about his work, so it is quite sure we will see him again at the Cannes Film Festival how he proudly represents ancient Japanese culture.