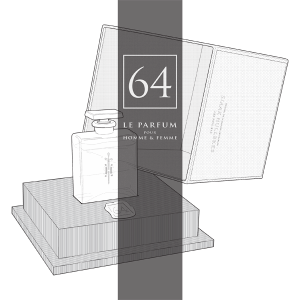 The tempting beauty of a young dandy and the mature strength of a gentleman combined are what is the essence of the first perfume launched by the house of Sjaak Hullekes.

It was the full atmosphere of the Sjaak Hullekes brand which inspired perfumer Barnabé Fillion to create this fragrance to be worn by men as well as by women. This androgyne perfume represents the sense of Sjaak Hullekes; the sophisticated, the sensitive, the mysterious, the pure and the nostalgic.

More then one year ago it was forecaster Borre Akkersdijk who saw the great combination of Sjaak Hullekes and Barnabé Fillion. Both share a fascination for craftsmanship and natural fibres, by which a great love for each others work was a direct result. This first meeting resulted into the first, limited, perfume by Sjaak Hullekes, by the thoughts of Sjaak, a concept by Borre Akkersdijk and the idea’s of Barnabé Fillion. A unique perfume, one to be launched on june the 1st at the Sjaak Hullekes shop in Arnhem, the Netherlands.

The perfume ‘64’ is leading it’s wearer into several directions, and is only to be reached and understood fully after wearing it for several days. It is a fragrance which changes, every single moment the different notes are developing itself to surprise the wearer every time again. The absence of chemicals in this perfume and the use of only raw materials makes it’s scent one to bring warmth and confidence.

It’s top note is made from different citrus plants as like Bergamot, Lemons from Sicily and the Italian Néroli flower. These are accompanied by many different kinds of wood, in which a beautiful smoky wood is one of the main scents to come through. Rosebay and pepper are to create the texture for this top note. The heart note warmly welcomes it’s wearer with scents of mystical spices and the melodious sweets of liquorice, while on the opposite the vetiver grass gives it’s heart a solid presence. The base note brings the strong fragrances of tobacco leaves and comfort using a touch of Amber.

The name of the perfume is based on the number of antique perfume bottles which where found specially for this perfume. 64 pieces of glass bottles representing the perfume’s fragility, together with the antique wooden platforms as part of it’s packaging the solid presence of this perfume is to be recognised.

The 64 bottles released are numbered and packed in a fully hand made packaging, manufactured in the Netherlands. The packaging is constituted by a wooden platform base which is provided with a luxurious wax seal showing the perfume’s name, and an embossed lid to cover the perfume bottle. Inspired by and with the ingredients from the forgotten past, a luxurious new box is the result.

64 is available as per june the 1st at the Sjaak Hullekes Arnhem based shop (kerkstraat 34, Arnhem, the Netherlands) and to be ordered online at www.sjaakhullekesshop.com for € 139,- (30 ml pure 100% natural perfume). Making your reservation is possible by calling or emailing the Sjaak Hullekes shop at +31 26 446 336 3 or arnhem.shop@sjaakhullekes.com

Sjaak Hullekes graduated in 2005 at the ArtEZ institute for arts and design (Arnhem), fashiondesign. Two years after his graduation he introduced his first collection, together with his former classmate Sebastiaan Kramer (1985), under the name of Sjaak Hullekes during the Amsterdam Fashion Week.

In 2008 they introduced the brand to the international market and got selling points from Japan to France to America. November 2009 they where awarded with the Mercedes-Benz Dutch Fashion Award by an international jury, consisting of Beppe Angiolini, Wilbert Das, Valentina Maggi, Jean-Jacques Picart, Marc Gysemans and Mauro Gailligari.

One and a half year later, April 2011, the first Sjaak Hullekes shop was to be opened, based in Arnhem the hometown of this men’s wear brand. January 2012 Sjaak Hullekes and Sebastiaan Kramer launched their underwear label (Sjaak Hullekes Sensitives) and had the honour to be the opening show of that season’s Amsterdam Fashion Week. Plans for opening a second Sjaak Hullekes shop are in a well advanced stage.

During his modelling career (which included campaigns for Martin Margiela and Paul Smith) Barnabé Fillion got in touch with the art of perfumery. By assisting perfumers he got the know more about this profession. It was at the laboratories of MANE, in Paris, where he learned about the details of the full work.

In the past years he has been working in collaboration with other perfumers as well as for fashion houses, art projects and magazines. Some of his clients includes Double You (distributed by Henrik Vibskov), Bloom magazine, Von sono, Canopée magazine and more. He now is working on new projects for some big names in fashion.

Borre Graduated in 2009 at the Design Academy in Eindhoven, in between his studies at Eindhoven he went to the Fashion Institute of Technologie in New York to get to know more about pattern making, moulding and fashion illustrating.

Since some time now Borre works for Lidewij Edelkoort in Paris where he is responsible for making trend-books and concept visualisations. Besides that he has been working by order of brands like Moncler and Dior, and was the one making a new fabric collection for the Museum of textiles in Tilburg (the Netherlands). In 2011 he was rewarded with the Bijenkorf Inspiration Award.