John Galliano suspended by Dior after claims of antisemitic rant 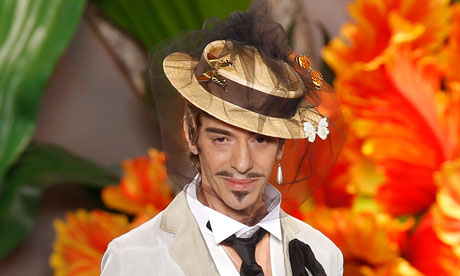 The French fashion house Dior has suspended its star designer, John Galliano, after he was accused of assaulting a couple and making antisemitic insults following a drinking session at a Paris bar.

Galliano, who has been Dior’s acclaimed creative director for 14 years, has been suspended from all duties during a police inquiry into the altercation in a bar in the Marais district of Paris.

“The House of Dior declares with the greatest firmness its policy of zero tolerance with regard to any antisemitic or racist statement or attitude,” the head of Dior, Sidney Toledano, said in a statement.

Galliano had been due to present his autumn-winter collections for Dior and his own label at next week’s Paris Fashion Week.

The flamboyant designer was briefly arrested after allegedly accosting a couple at La Perle bar, near his home. The couple, a Jewish woman and her Asian boyfriend, told French radio Europe 1 he had said to them: “Dirty Jewish face, you should be dead” and “Fucking Asian bastard, I will kill you”. He allegedly repeatedly called the woman “ugly” and a “slag”. A police official said that Galliano also exchanged slaps with the couple. The row began at around 9pm at the bar known for its hip fashion clientele.

Galliano was arrested and taken to a police station for a sobriety test, where he was found to be just over the legal limit. Police then escorted him to his home.

A police source told Reuters that the outburst was prompted by stress before fashion week. Dior’s show is always in the spotlight, with Galliano under pressure each year to top his traditionally eccentric and lavishly decorated shows.

Galliano’s lawyer, Stephane Zerbib, told Agence France Presse: “There was an altercation. Mr Galliano was verbally attacked but at no moment did he make these insults. We have witnesses to that effect.”
He said Galliano was not at all in the “state of mind” described and “will explain later”. He added that “legal action would be taken against those making such accusations”.

Galliano, 50, who took the creative reins of Dior in 1996, has been based in Paris for 20 years. He is a regular face in the Marais where he has often been seen driving a garish classic car, an old-fashioned yellow taxi. Born in Gibraltar, the son of a British plumber and a Spanish mother, the moustachioed Galliano’s style has often been attributed to his mixed roots.

The Marais district is the historic centre of the Jewish community in Paris and was heavily targeted in the deportation round-ups of the Nazi occupation. In recent years, its narrow streets have been taken over by fashion shops and bars. Dior’s quick action in suspending Galliano could be explained by a recent outcry over another racist remark for which its parent company, the luxury goods giant Louis Vuitton-Moet Hennessy, was seen as being slow to react.

Late last year, hundreds of protesters gathered outside the Guerlain store on the the Champs Elysee calling for a worldwide boycott of the perfume house and its owner, LVMH, over a racist slur. One of Guerlain’s best-known perfumiers had said on TV that he “worked like a nigger” to create a new scent. Jean-Paul Guerlain, 73, a descendent of the perfume house’s founder, was interviewed on French state TV and asked about the creation of a new perfume, Samsara. He replied: “I worked like a nigger. I don’t know if niggers have always worked like that, but anyway.”

After being publicly slammed for not responding quickly enough, LVMH released a statement “condemning all forms of racism”.

http://engagementjewelry.ca Thanks for that awesome posting. It saved MUCH time