Les Jardins de Mademoiselle: A New Hotel and Spa in the 15th Arrondissement 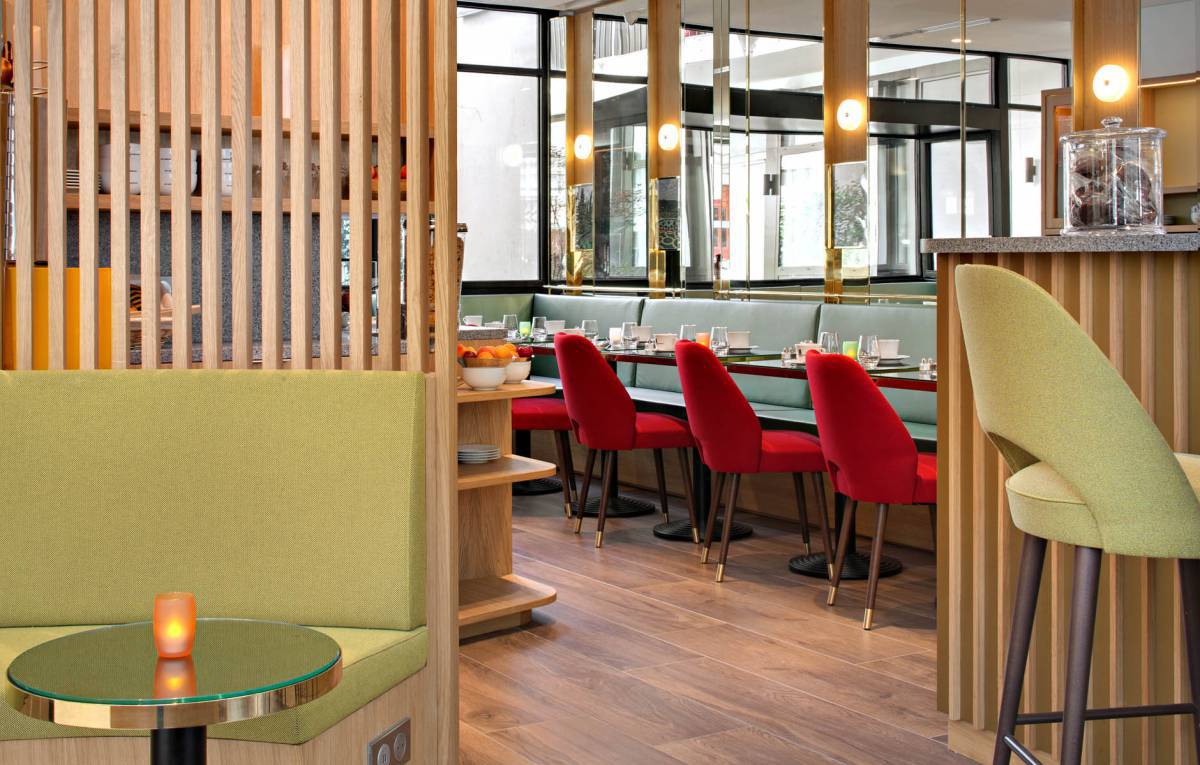 Among numerous Parisian hotels, scarce are the ones that can evoke the serenity of home and tranquility of a spa. Les Jardins de Mademoiselle, a new hotel and spa in the 15th arrondissement, is one of that rare kind. This four-star property is built around a beautiful garden that now presents the hotel’s private oasis, available to guests for their enjoyment and relaxation.

We spent a healthy amount of time at that soothing patio, but maybe even more at the amazing greenery-filled 4th floor terrace, getting lost in views over the endless Parisian rooftops. This is the place where one can completely immerse in the fumes of hot Parisian nights and enjoy the gleaming lights of this marvelous city. 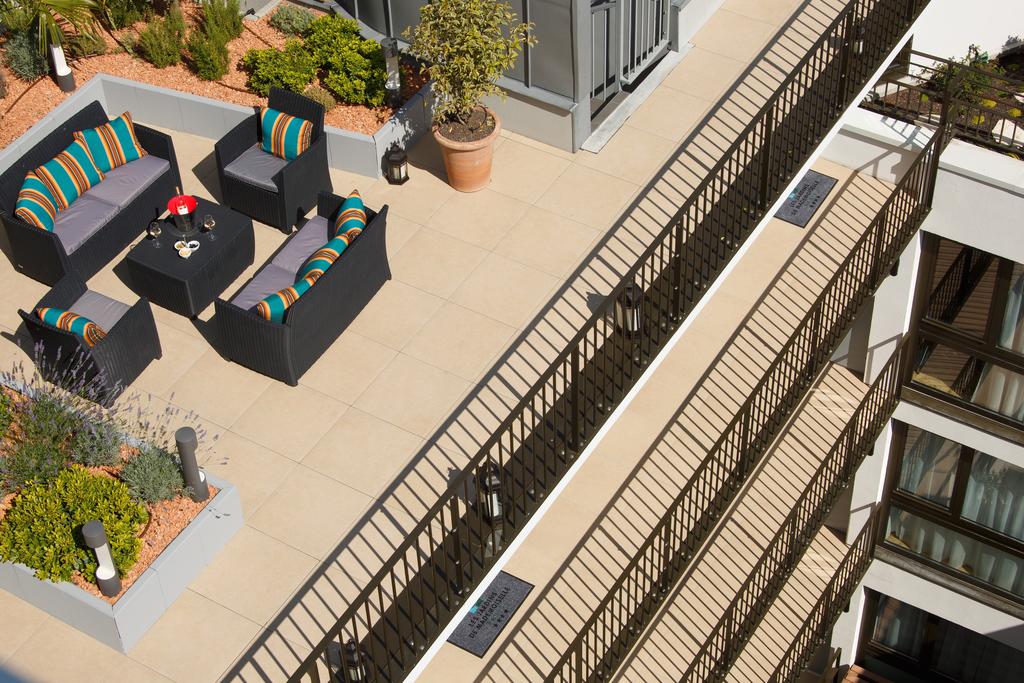 Throughout the hotel, the botanical vibes are the ones that prevail. A slick combination of French, Japanese and Oriental decoration presents a perfect example of tasteful and well thought-of interior. The rooms are spacious and bright, with almost organic feel to them. Japanese influence is very strong when it comes to the room decoration, especially at the Junior Suite Kojo-No-Mai, and that is another strong caracteristic of Les Jardins de Mademoiselle. 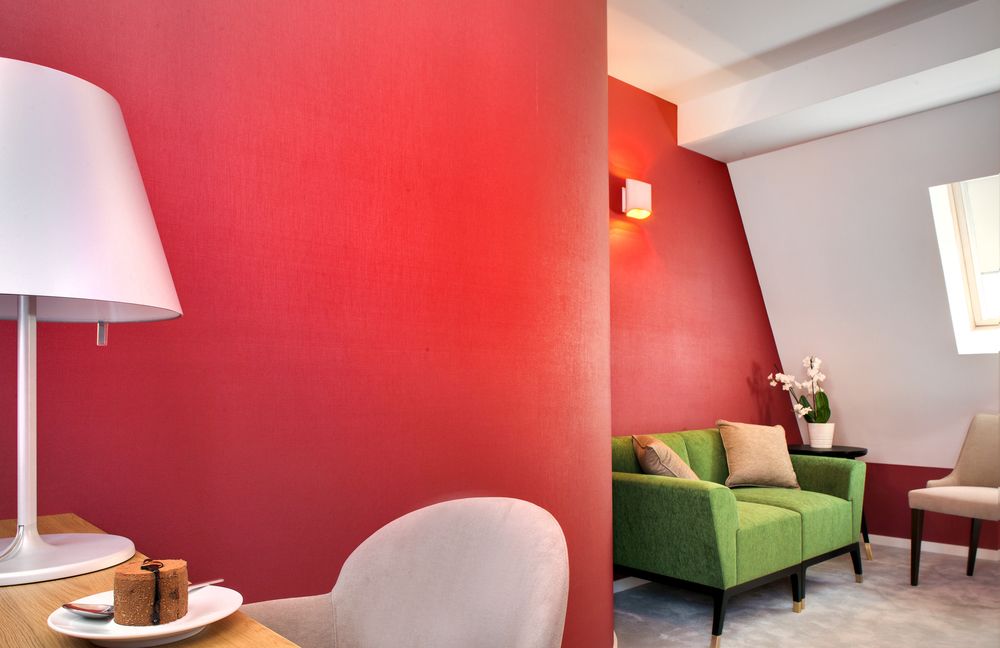 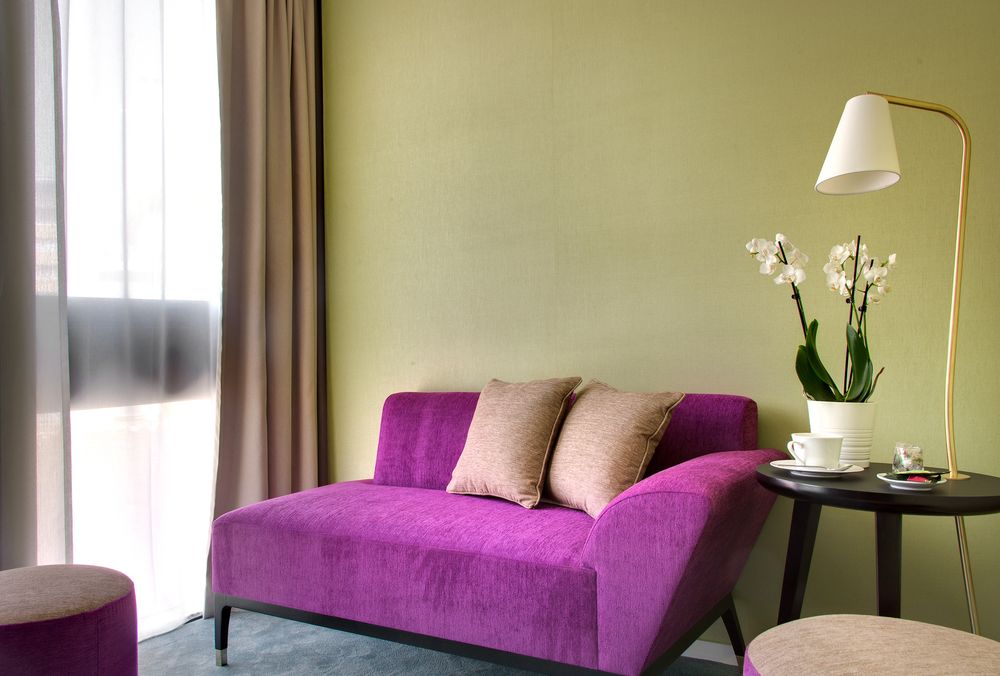 The real gem of the hotel, though, is the Eiffel Terrace Suite, equipped with its own terrace that offers breathtaking overview of Parisian landscape, with sights like Eiffel Tower and Tower Montparnasse. 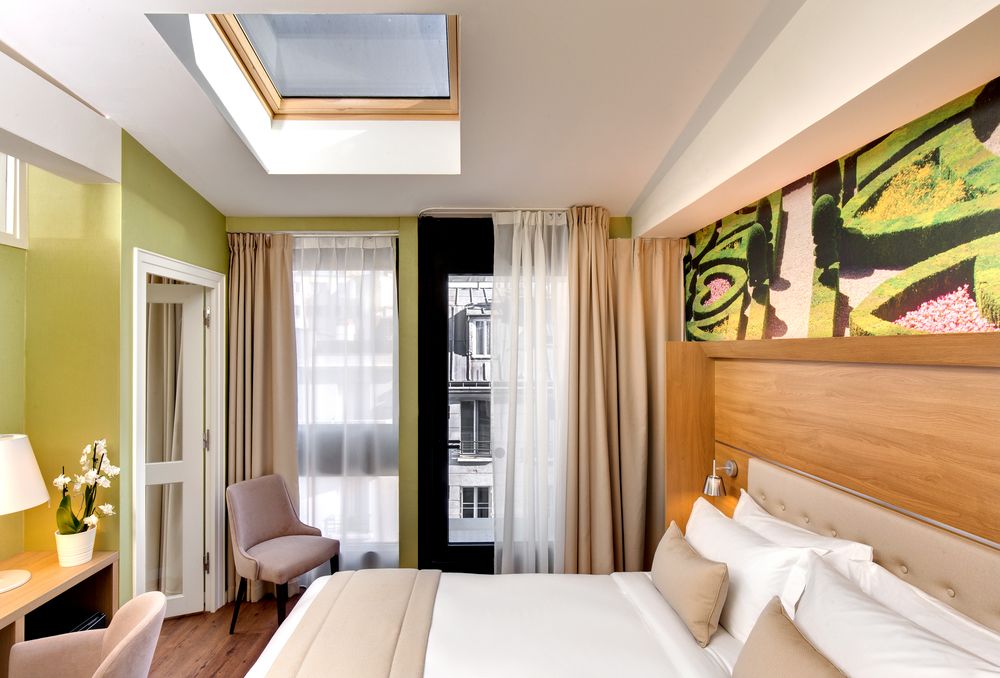 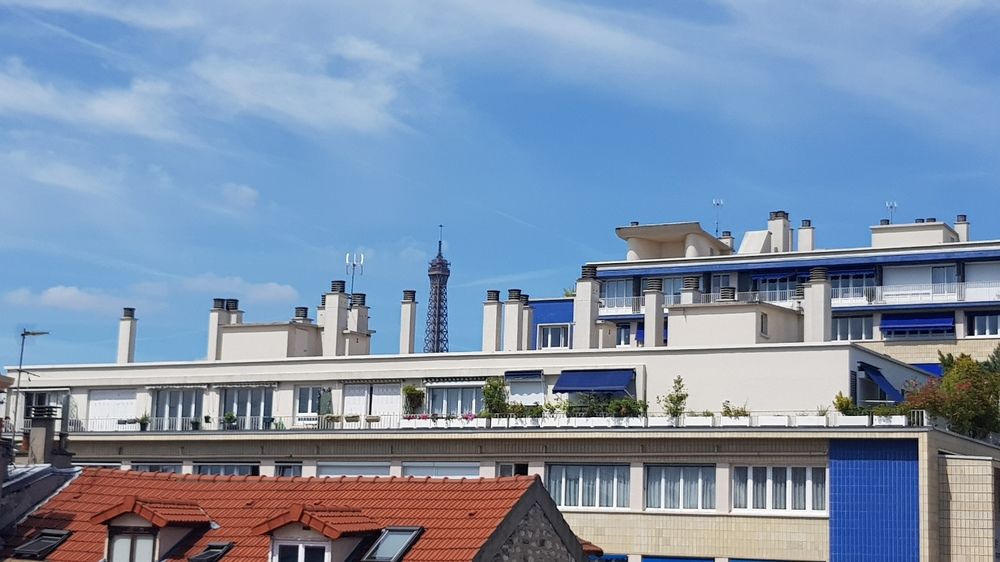 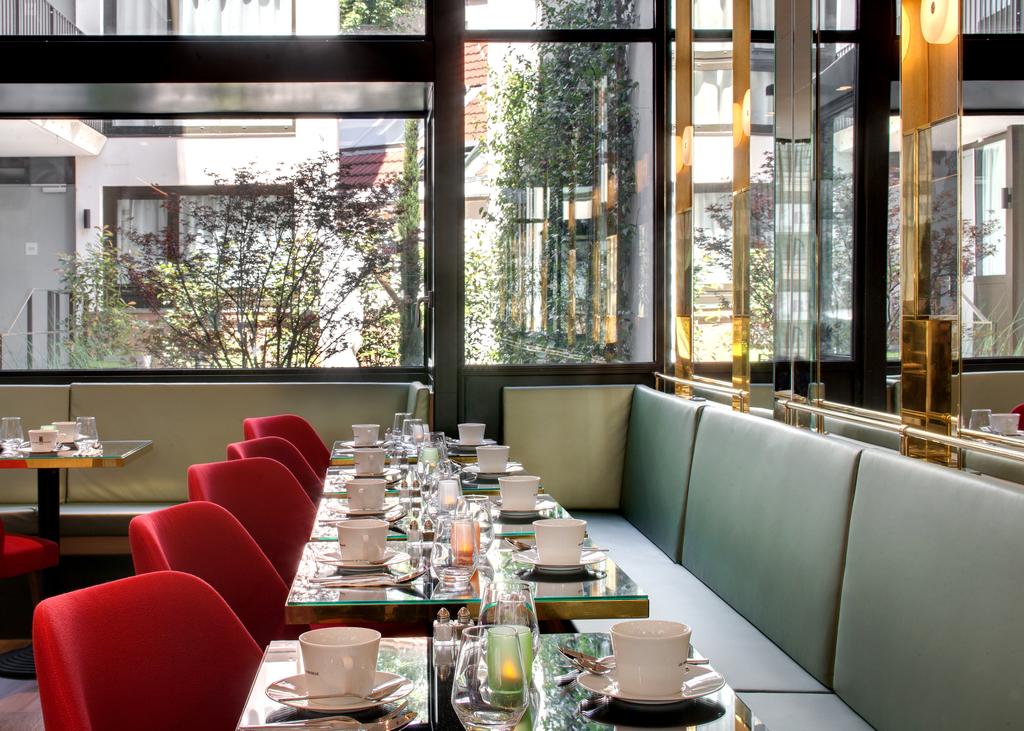 Hotel Les Jardins de Mademoiselle comprises the gym and the spa. And while the gym is modern and well equipped with new Technogym machines, the spa is the main attraction here. Not only that it has a wonderful Turkish bath, it also comprises one of the largest and definitely one of the prettiest swimming pools among the hotels of the same category. It is really easy to arrange a perfect spa day at Les Jardins de Mademoiselle, with numerous strolls back and forth between the swimming pool and hammam. 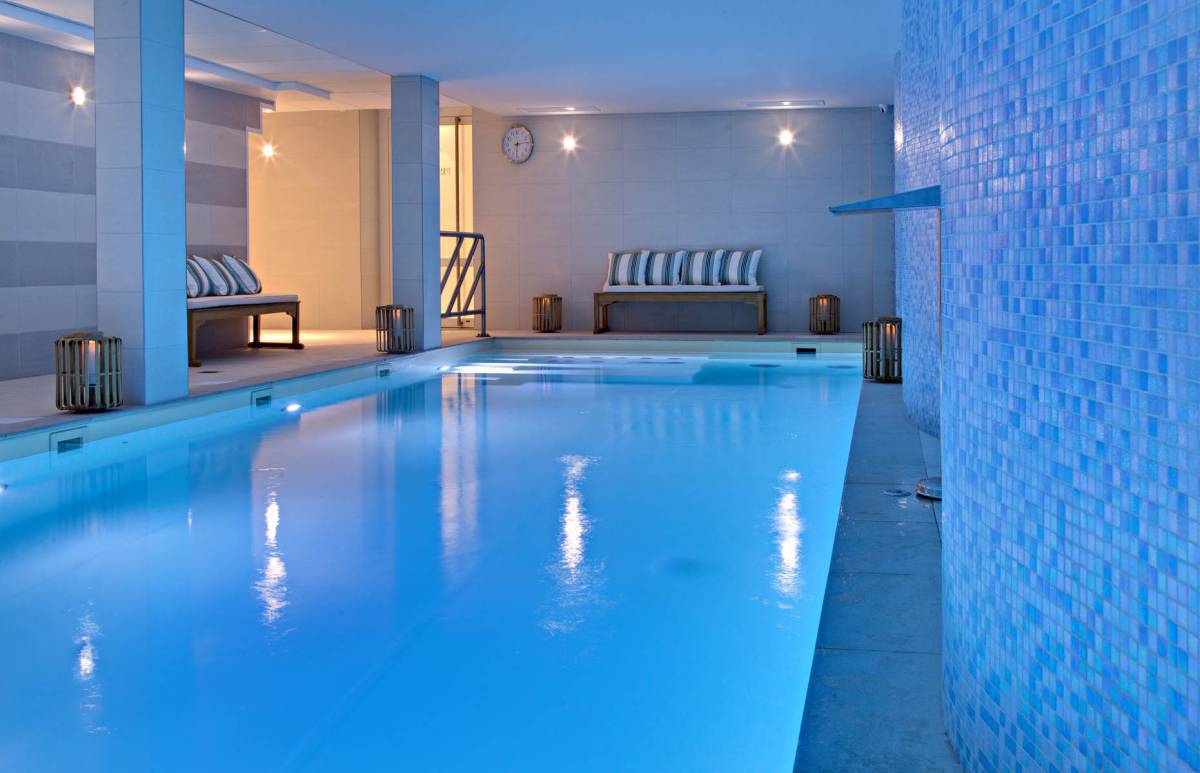 The 15th arrondissement of Paris is located on the Left Bank of the Seine, in the southwest of the city. Mademoiselle Street, where the hotel is situated, starts from rue des Entrepreneurs, opposite the Saint-Jean-Baptiste church in Grenelle, and ends at the intersection of rue Cambronne and rue Lecourbe. Louise Marie Thérèse d’Artois (1819-1864), daughter of the Duke of Berry and Duchess of Parma, participated in the laying of the foundation stone of the Saint-Jean-Baptiste church in Grenelle (September 2, 1871), resulting in the naming of a street (rue Mademoiselle) after her.

During our stay we have visited Parc André Citroën, which is 2 km away from the hotel. The park is perhaps best known for its huge tethered helium balloon that can take guests up for amazing panoramic views of the city. Pont de Bir-Hakeim, the place where Marlon Brando filmed “Last Tango in Paris” is also nearby. The hotel is convenient for visiting Eiffel Tower, and we suggest a walk to Pont Mirabeau which offers a lovely angle of the iconic monument. Maison de Balzac is in the walking distance in the heart of the Passy, as well as Musée Bourdelle. Antoine Bourdelle was one of France’s greatest sculptors. He was a pupil of Rodin, and one of the artists who designed the Théâtre des Champs-Élysées. Rue de Vaugirard is the longest street in Paris, stretching through both the 6th and 15th arrondissements. Whether you start in the heart of Paris and walk outwards, towards the 15th arrondissement, or start on the outskirts and walk to the center, a stroll along this historic thoroughfare is a great way to discover some of Paris’ iconic sights.

Being situated in quiet 15th arrondissement has its benefits, and in our opinion, they are huge. This is a calm neighborhood, very close to the city center, yet with just enough distance from Parisian tourist traps that one can stop for a second, take a deep breath and let himself fall in love with the City of Lights over and over again. Hotel Les Jardins de Mademoiselle presents a wonderful starting point for the city explorations and just about a perfect spot to come back to after a day full of sightseeing and strolling down the endless Parisian boulevards.

Last August, we stayed at the beautiful Le Narcisse Blanc, a five-star luxury hotel and spa located in one of the most picturesque neighborhoods in Paris, the prestigious 7th arrondissement. Situated between the Pont Alexandre...

A dazzling heritage- breathtaking architecture, numerous monuments, museums and art galleries, all spiced up with legendary mischievous French spirit, make Paris an undisputed tourism capital of the world. The City of Lights...

Le Cinq Codet: The Home of Art and Luxury

Hotel Le Cinq Codet, a highly prestigious five-star property, is situated in one of the Parisian most elegant quarters, in the historic 7th arrondissement. This classy hotel has established itself as a Left Bank favourite...