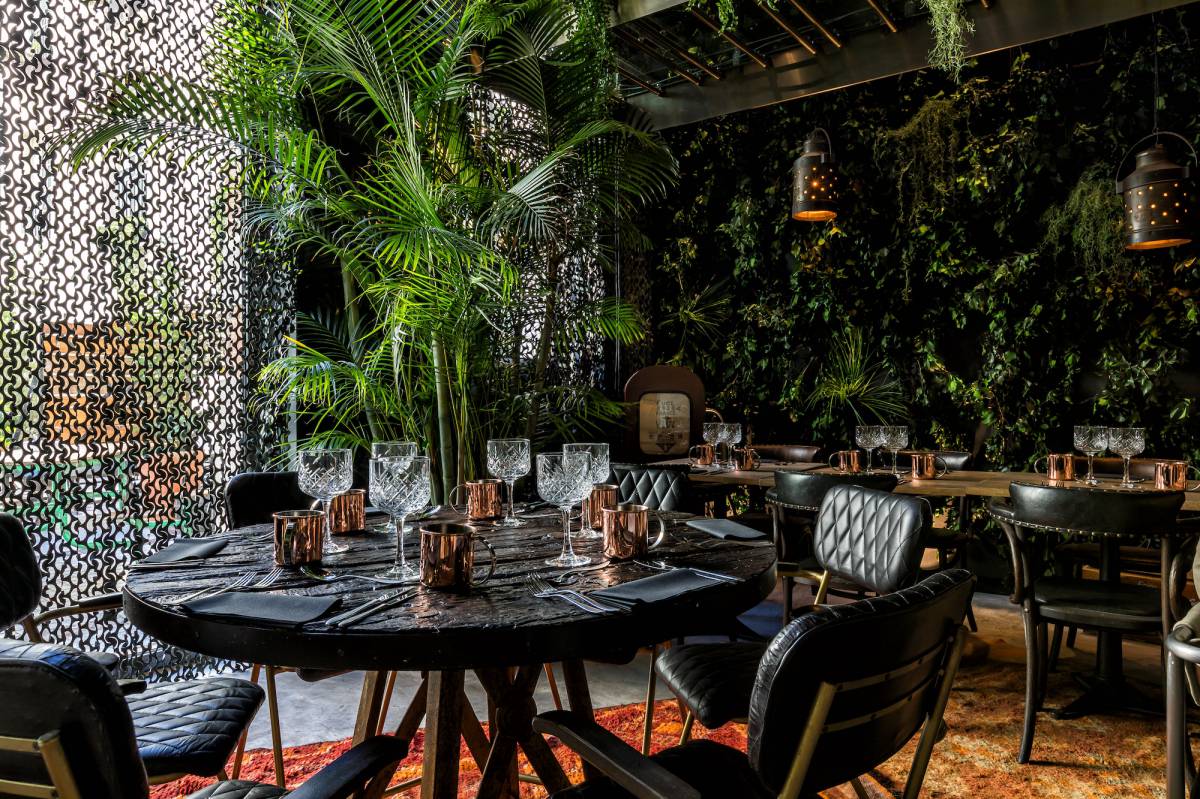 Kube Hotel Paris is part of Machefert Hotels Collection, a family hotel group with properties in Paris, Saint-Tropez and Marrakech. It is nestled in a quiet street out of the hustle and bustle of La Chapelle, with a classical facade of a nineteenth century building. The hotel is modern, edgy and very chic property built with urban, design-oriented clientele in mind. 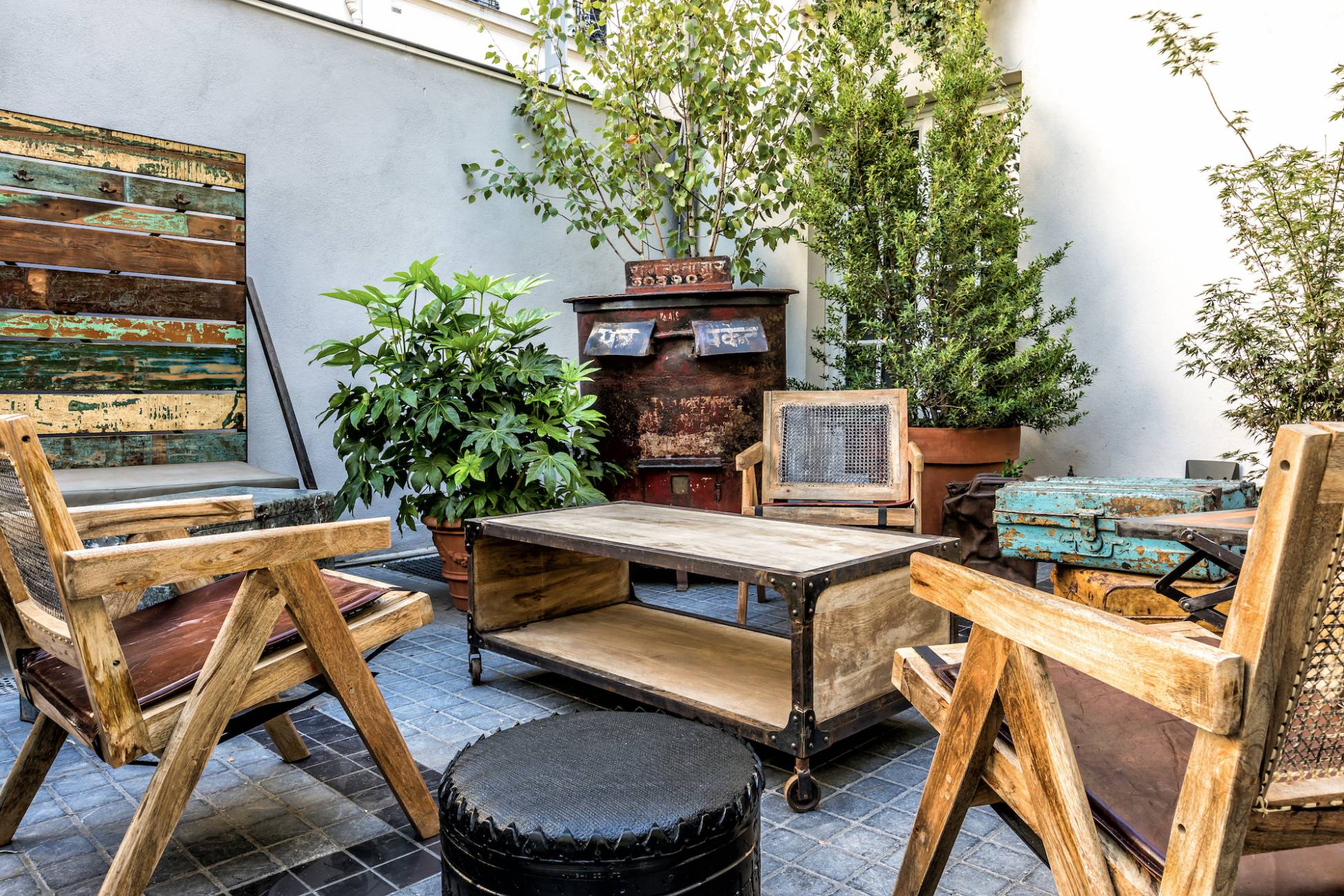 Located in 18th arrondissement, Kube is relatively close to incomparable Moulin Rouge cabaret, thus not far away from the legendary bohemian quarter Montmartre with its monumental Sacre-Coeur cathedral that overlooks the entire city. The 18th arrondissement is the place for party-goers in Paris with its numerous theatres, bars, restaurants… Kube Hotel is also close to the famous Barbes market, a place where one can find all spices and ingredients necessary for various cooking experiments. 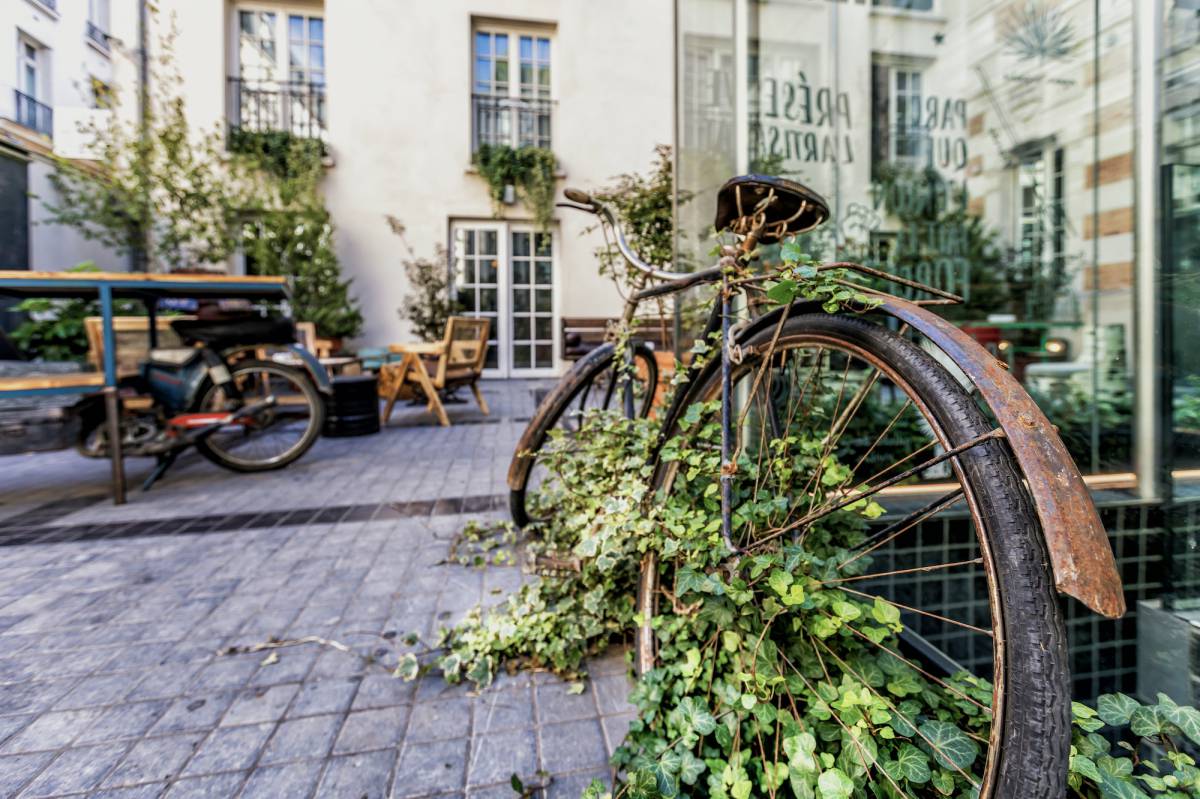 As its name indicates, the interior design and the architecture of the Kube Hotel are inspired and modeled after a very specific geometric shape – cube. That concept dominates from the unusual reception in the courtyard throughout the rooms which evoke the energy and harmony of Scandinavian design. The hotel’s lobby bar and restaurant Après, looks like a post-apocalyptic version of Disco 54-era nightclub located in the midst of a tropical forest. And that same difference between the clubbing-inspired looks of the public spaces and pretty much subdued and muted interiors of the rooms makes Kube Hotel one-of-a-kind experience. 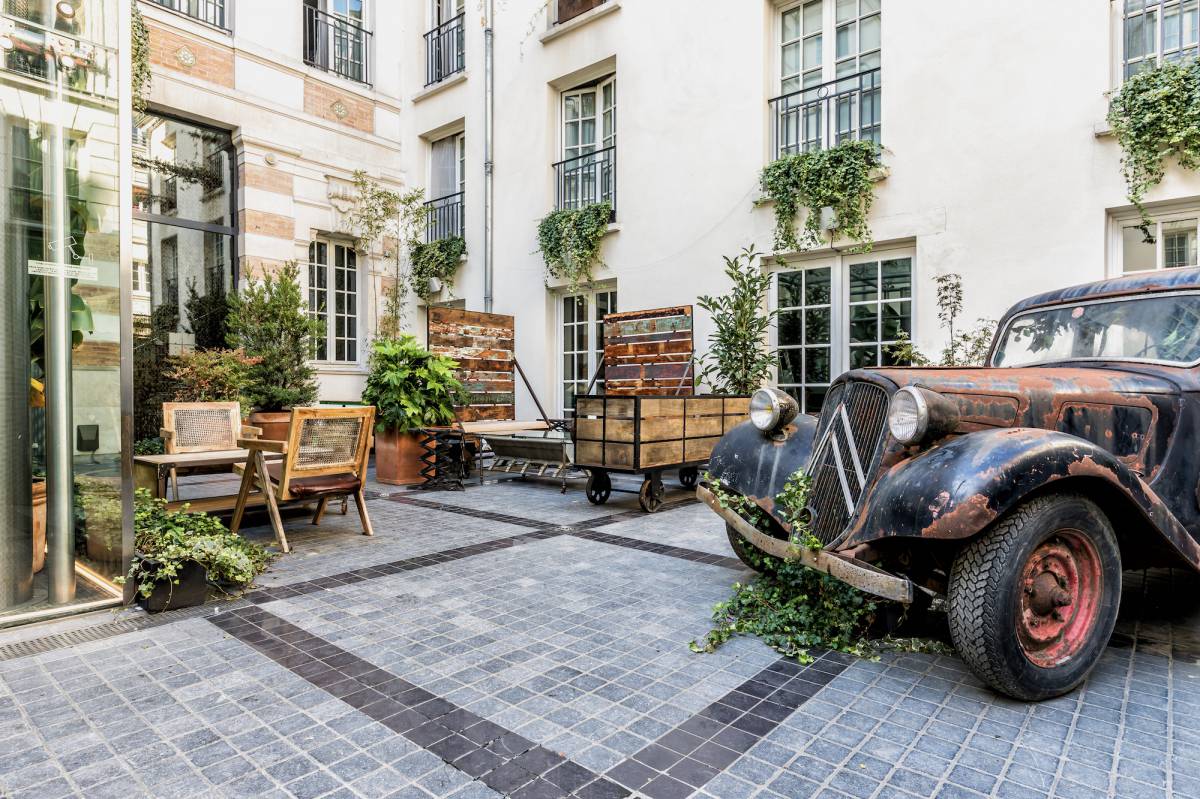 The design language of the hotel is definitely modern, but with prominent touches that evoke not only hip eighties but even more late sixties and seventies, when interior designers finally started to loose the shackles of conventionality. Kube Hotel was designed with such crowd in mind – open-minded and rebellious, respectful of the not-so-distant past, but with a clear vision of the present and the future. The hotel’s amazing lobby bar overall ambiance flirts with the one from George Miller’s classic Mad Max films. 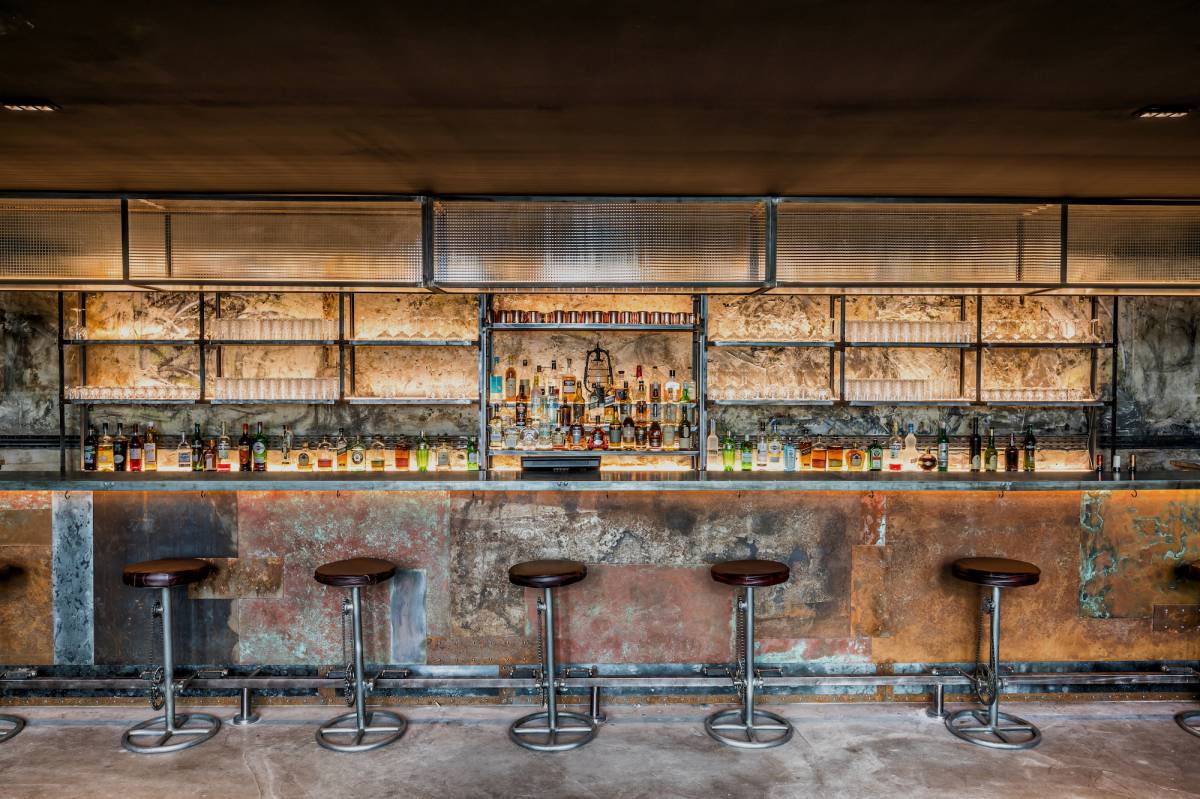 All 40 rooms at Kube Hotel are bright and spacious, with light materials that only punctuate overtly modern atmosphere. Guests of Kube Hotel have a choice of five different room categories – Superior Medium, Large, XL Junior Size, XL and XXL. All rooms are fully equipped with amenities such as free WiFi, flat-screen TVs, a smartphone with unlimited data and calls, PlayStation 3 game consoles, coffeemakers, and safes. Access to rooms is available via smartphone, guest’s email or key. 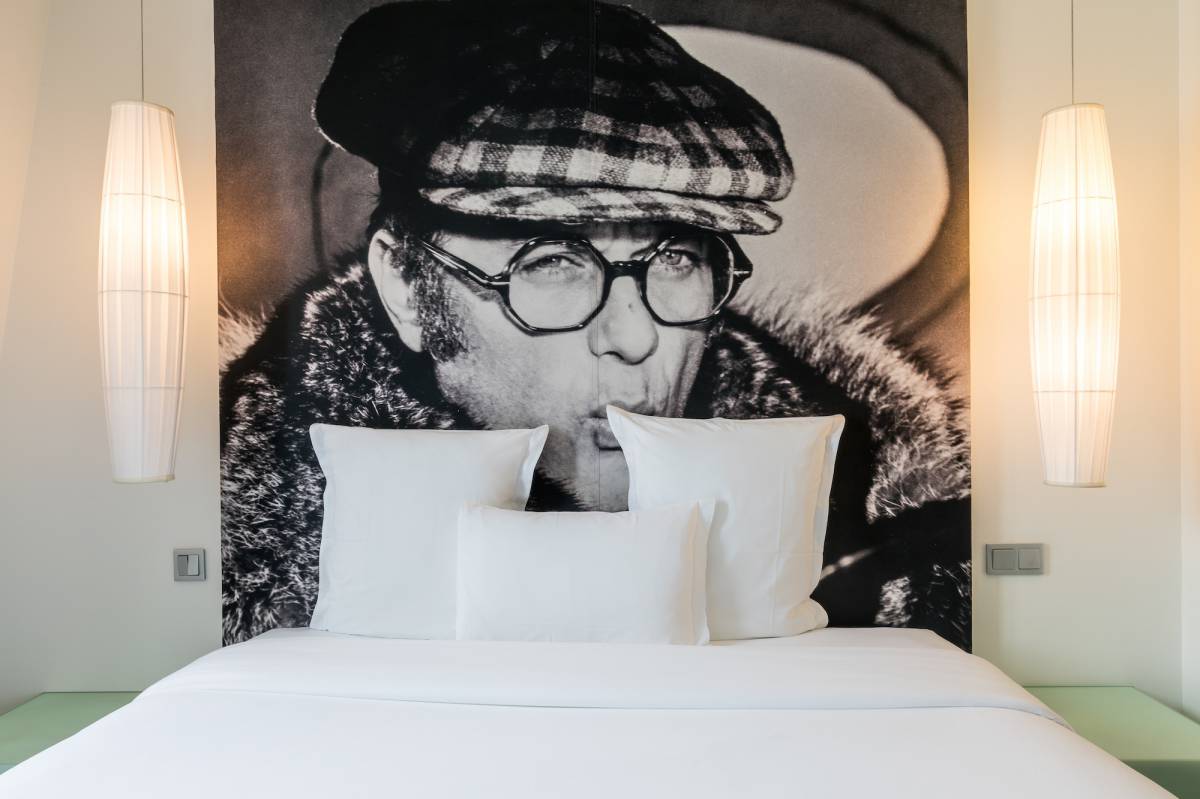 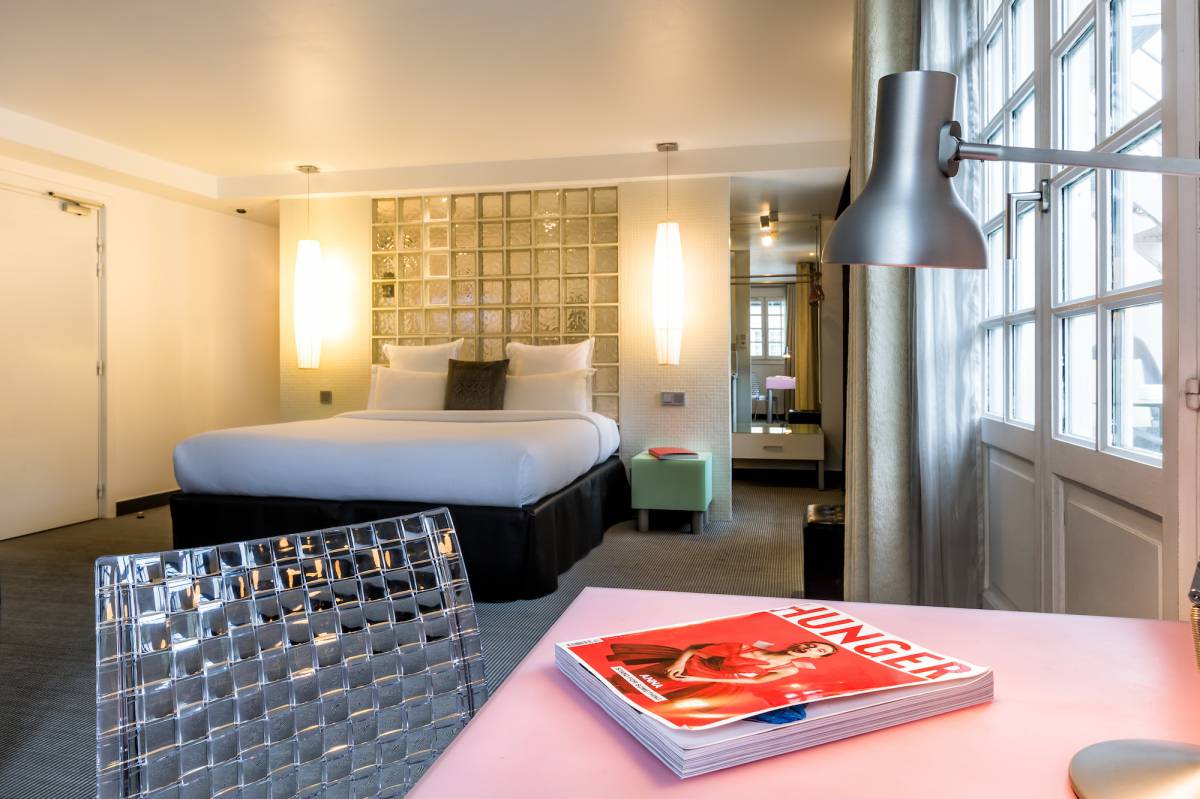 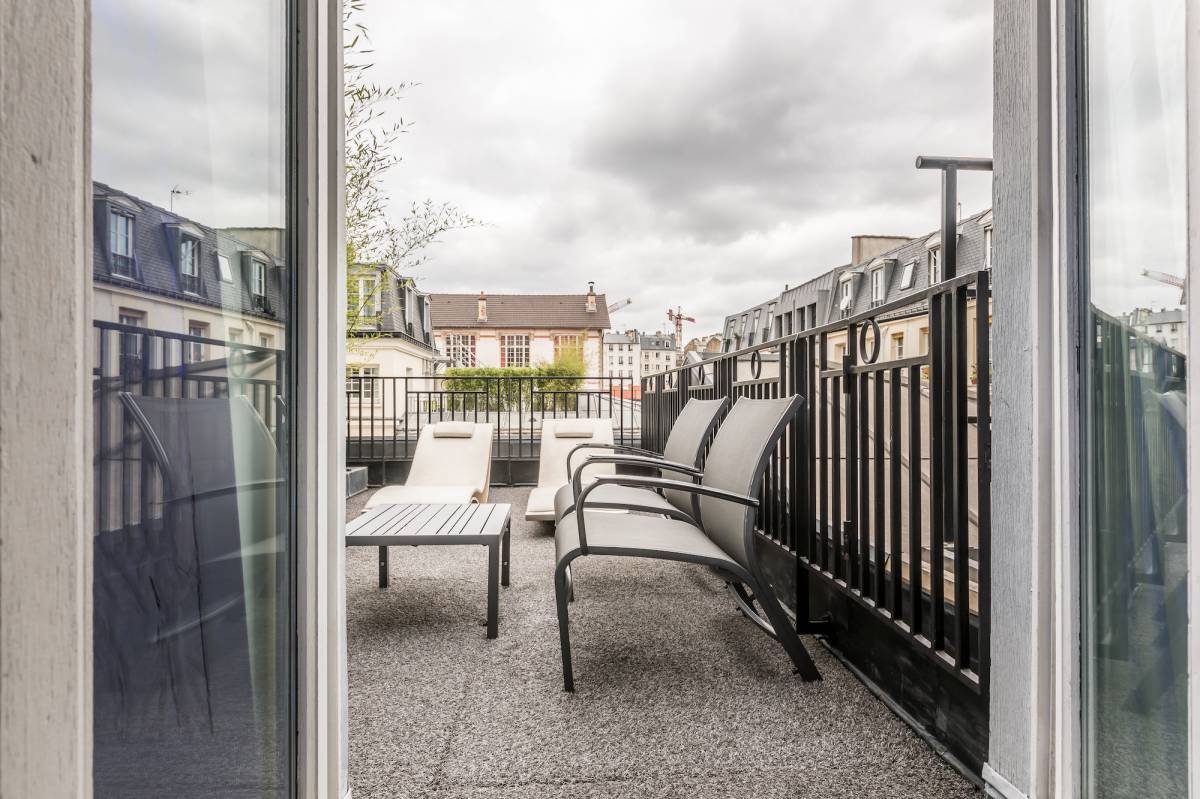 And while we thoroughly enjoyed our stay in Kube’s wonderfully large XXL room (with its generous 40sqm equivalent to the suite in conventional hotels), and even more our cute terrace, nevertheless we spent majority of our time in the hotel’s amazing lobby bar. 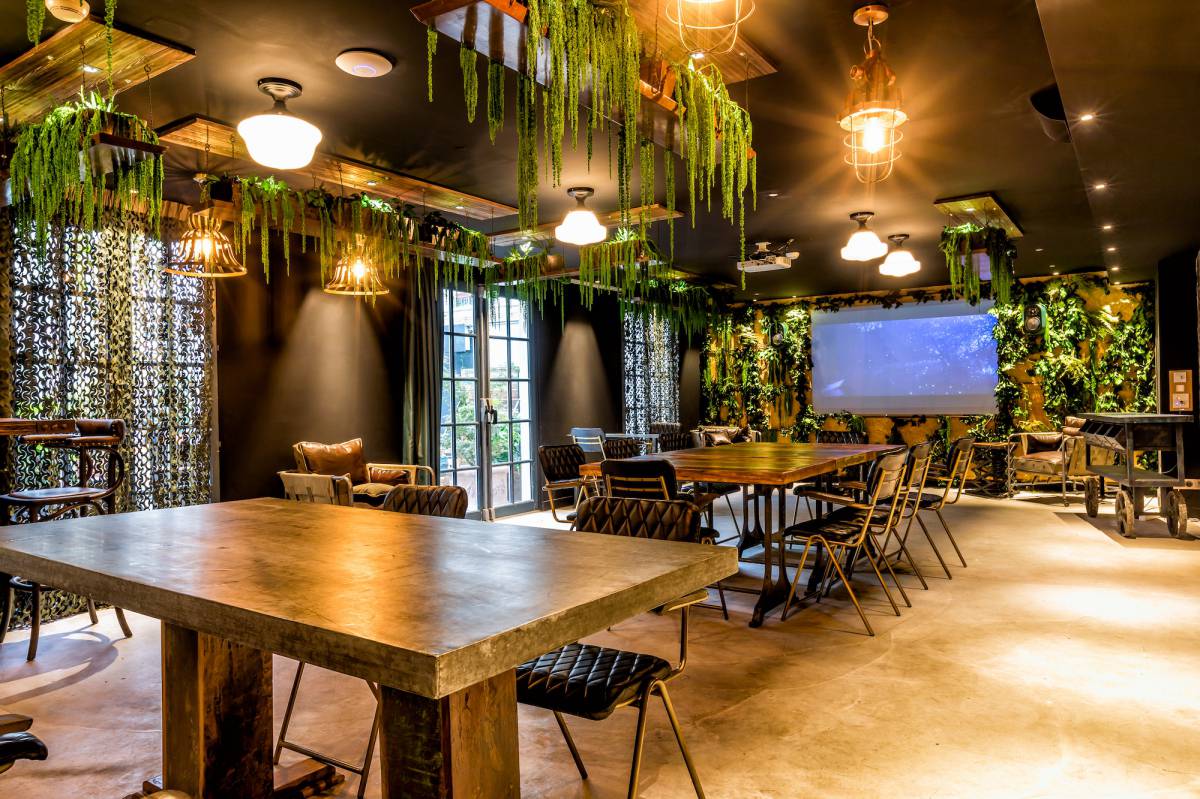 Après offers a full menu based on contemporary French cuisine, spiced up with creative twists from it’s chefs. The dishes are made with fresh and seasonal ingredients like sea bream tartare with citrus fruits, baked egg with foie gras and black trumpets homemade cream or the famous signature dish of the restaurant, the Boeuf Bourguignon. The cocktails are also amazing, so it doesn’t surprise that we spent some quality time enjoying them on the Apres’s beautiful terrace during hot summer nights. 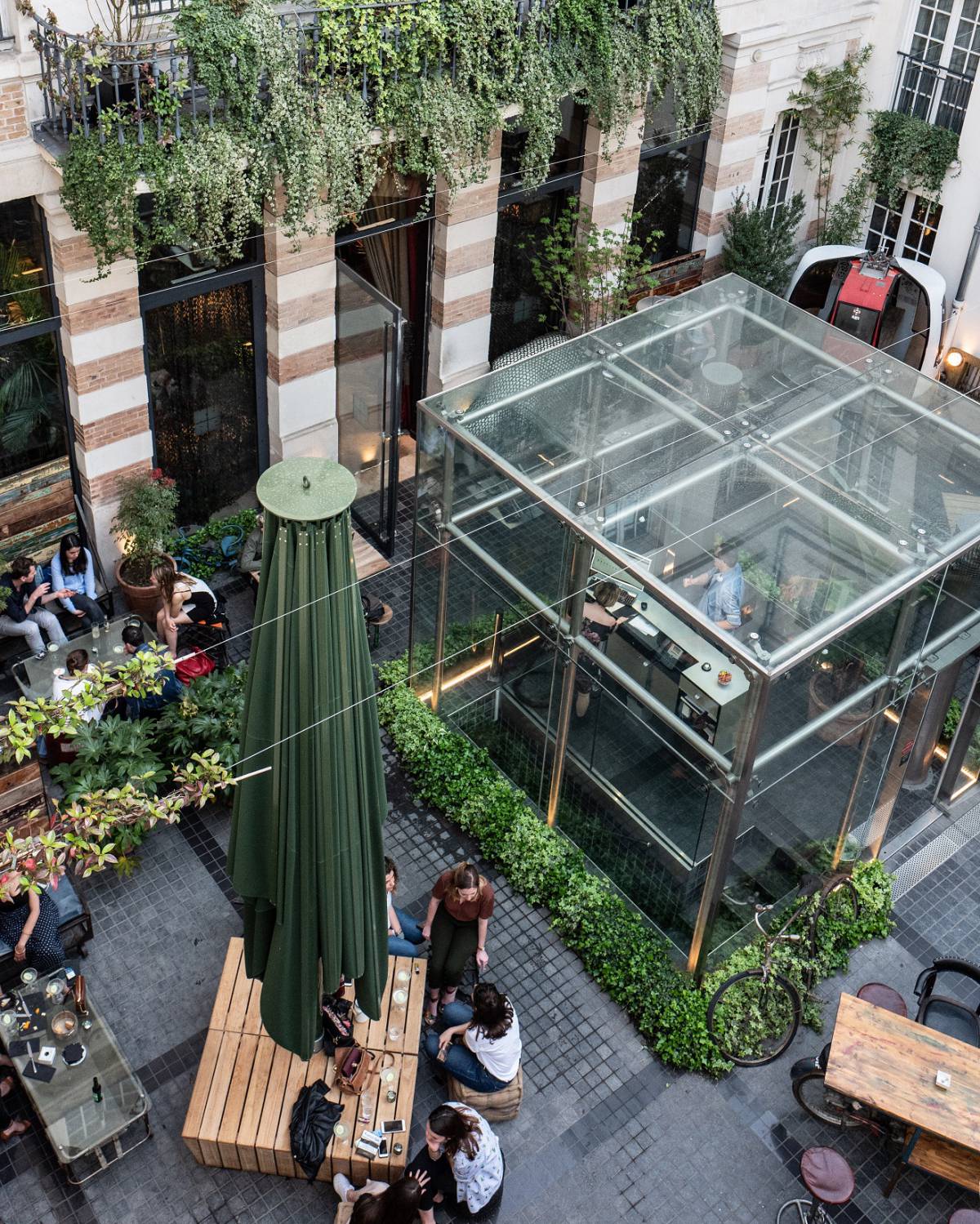 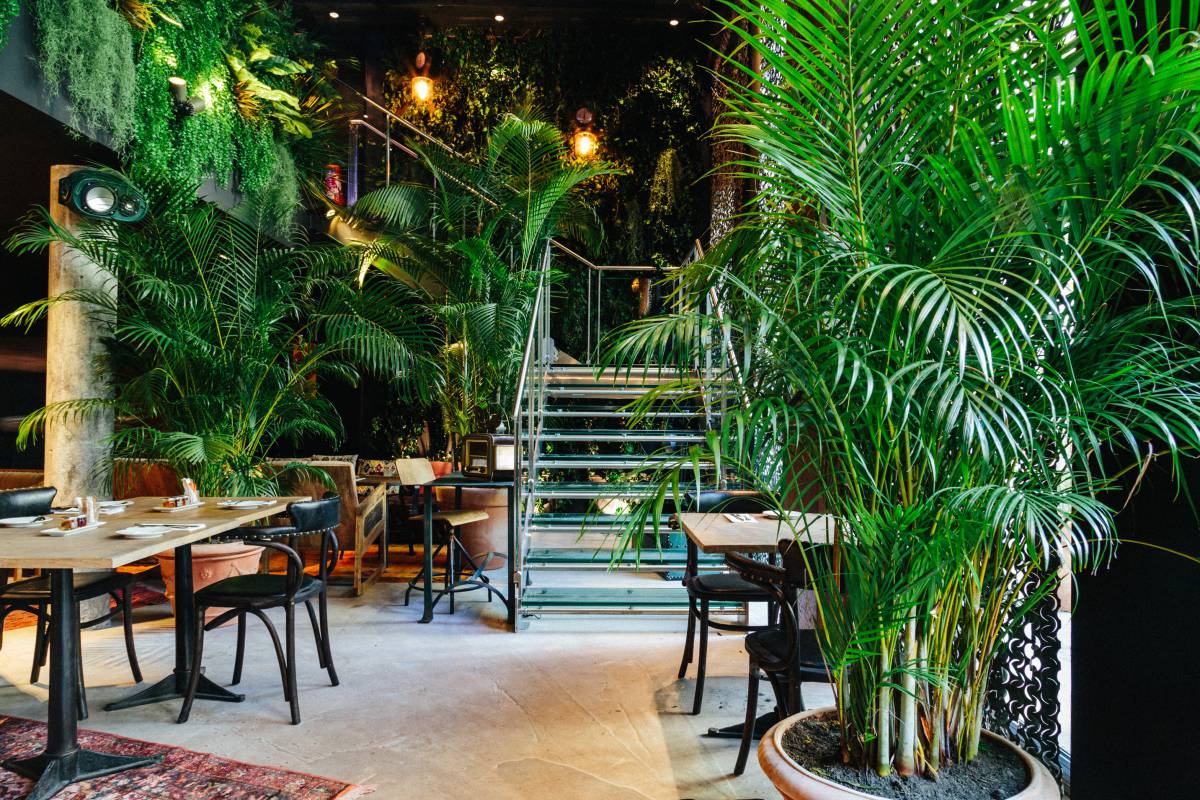 For business purposes, Kube Hotel Paris is equipped with two conference rooms. The hotel also prides itself with Paris’s only Ice Bar, where one can enjoy delicious cocktails while surrounded, well, with ice! The bar is carved out of 25 tons of ice, where at minus ten degrees Celsius, visitors can enjoy vodka-based cocktails. Another one of Kube Hotel’s treats to its clientele! This concept attracted many thrill seekers, like the billionaire adventurer Richard Branson and his son Sam. 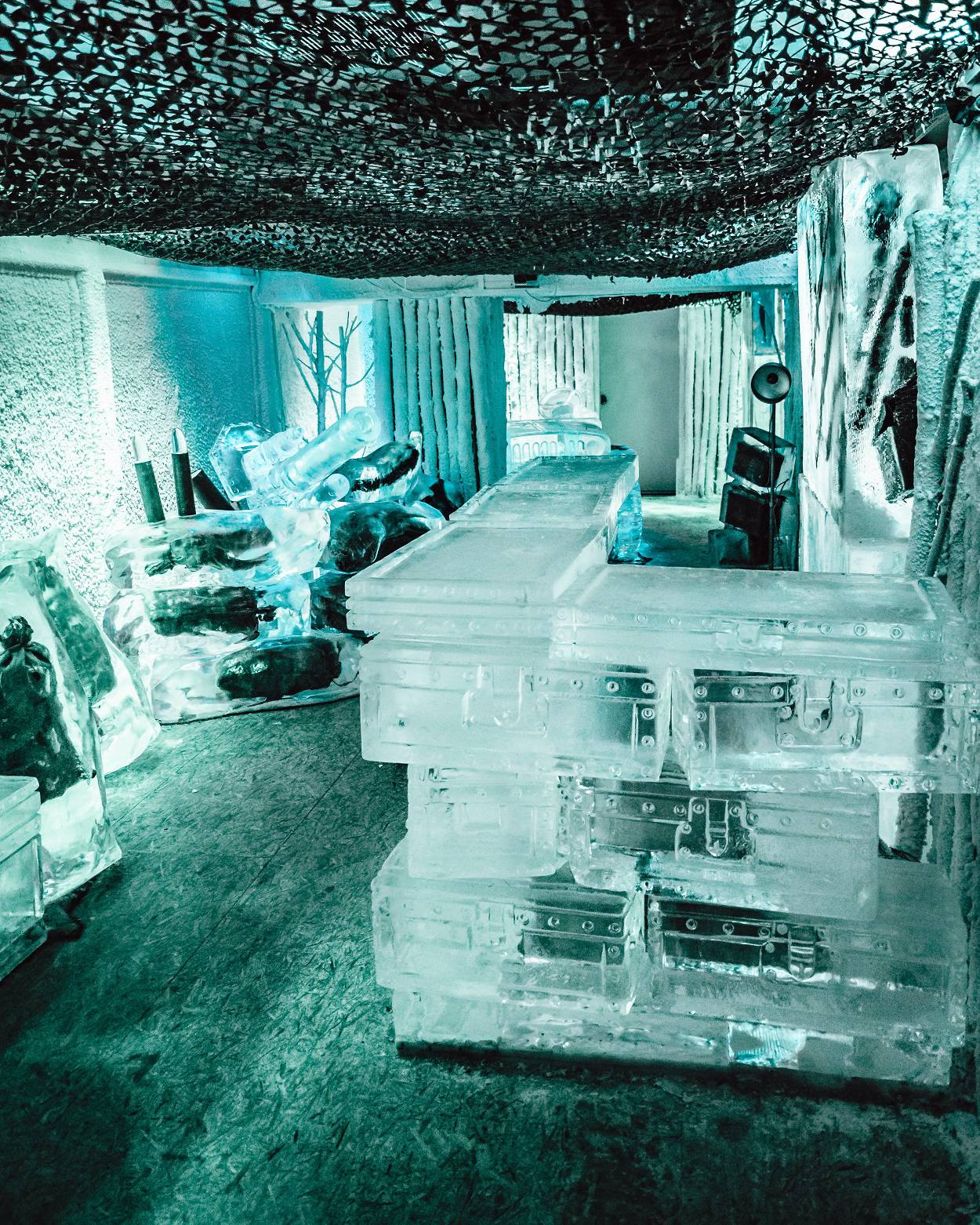 Being the fitness aficionados, we always appreciate hotels equipped with a good gym, and the one in Kube is one of the best. Not only that the machines are of the highest quality and pretty much brand new, the very design of the place simply invites you to spill some sweat and burn a couple of calories added during a dinner.

Inviting atmosphere or the pleasant staff? Our best guess is that it is the combination of all those factors that made us really enjoy Kube day after day. The highly unusual design experience has a great deal to do with the success of this extraordinary site.