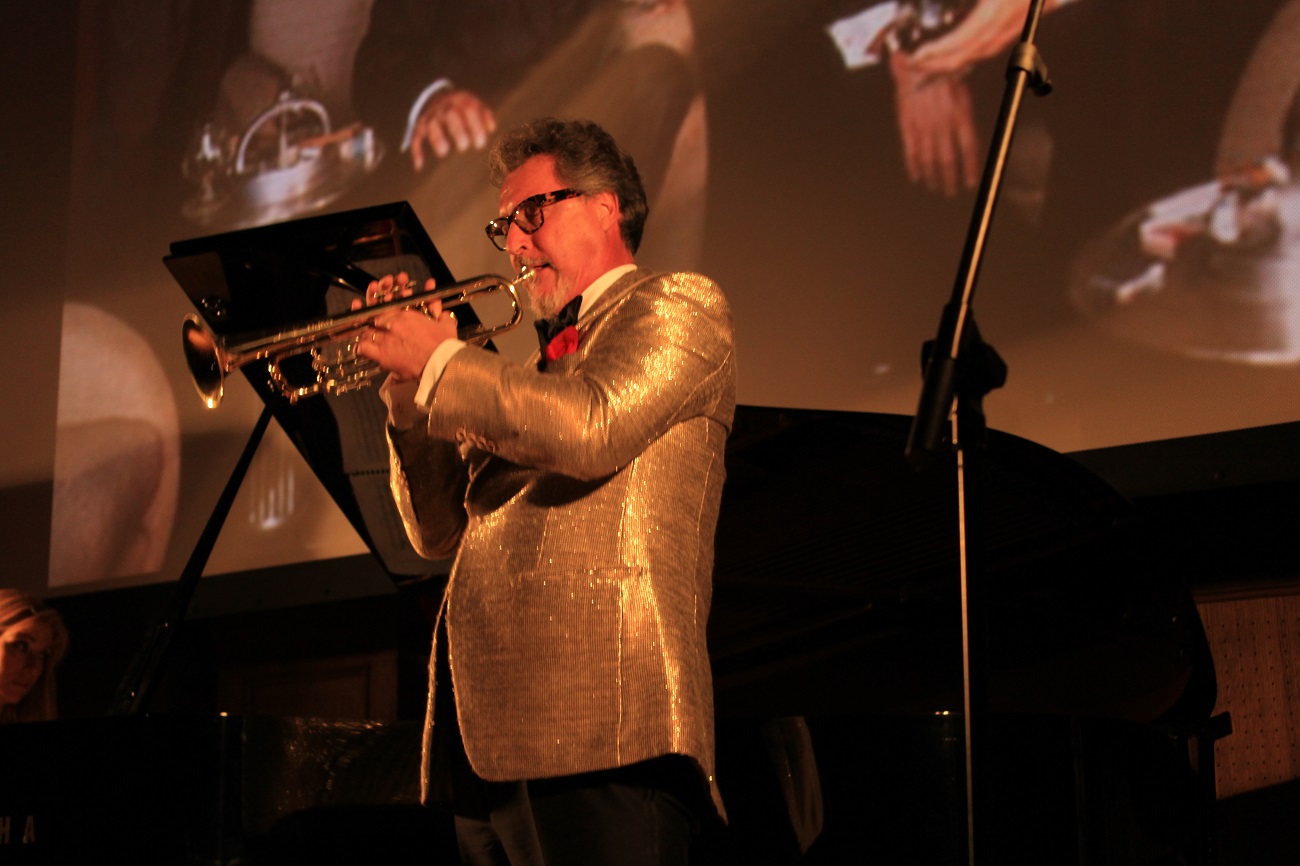 The Italian Film Festival opened on September 16th with a concert of legendary Italian musician Mauro Maur, whose trumpet can be heard in a vast number of movie classics. The annual event is organized by Associazione Culturale Excellence in Belgrade, in collaboration with the Italian Cultural Institute in Belgrade, Jugoslovenska Kinoteka and the Italian Ministry of Cultural Heritage, Activities and Tourism (MIBACT).

One of the greatest trumpeters of our time, Mauro Maur, with a talented pianist Françoise de Clossey, reminded audience on timeless melodies from cinematographic masterpieces- „Mission“, “A Fistfull of Dollars”, “Bugsy”, “Mediterraneo”…etc. Maur also shared with mesmerized audience a number of anecdotes from his rich career. He recorded the music for the last three Fellini films and he spoke about his great friendship with him and Giulietta Masina. He played Nino Rota‘s music at their respective funerals in Rome. What drew most attention was a story about legendary “Lullaby” from Sergio Leone’s classic “A Fistfull of Dollars” and how Ennio Morriconne actually dedicated this song to Mauro Maur himself, who in return gave his best in spectacular performance. 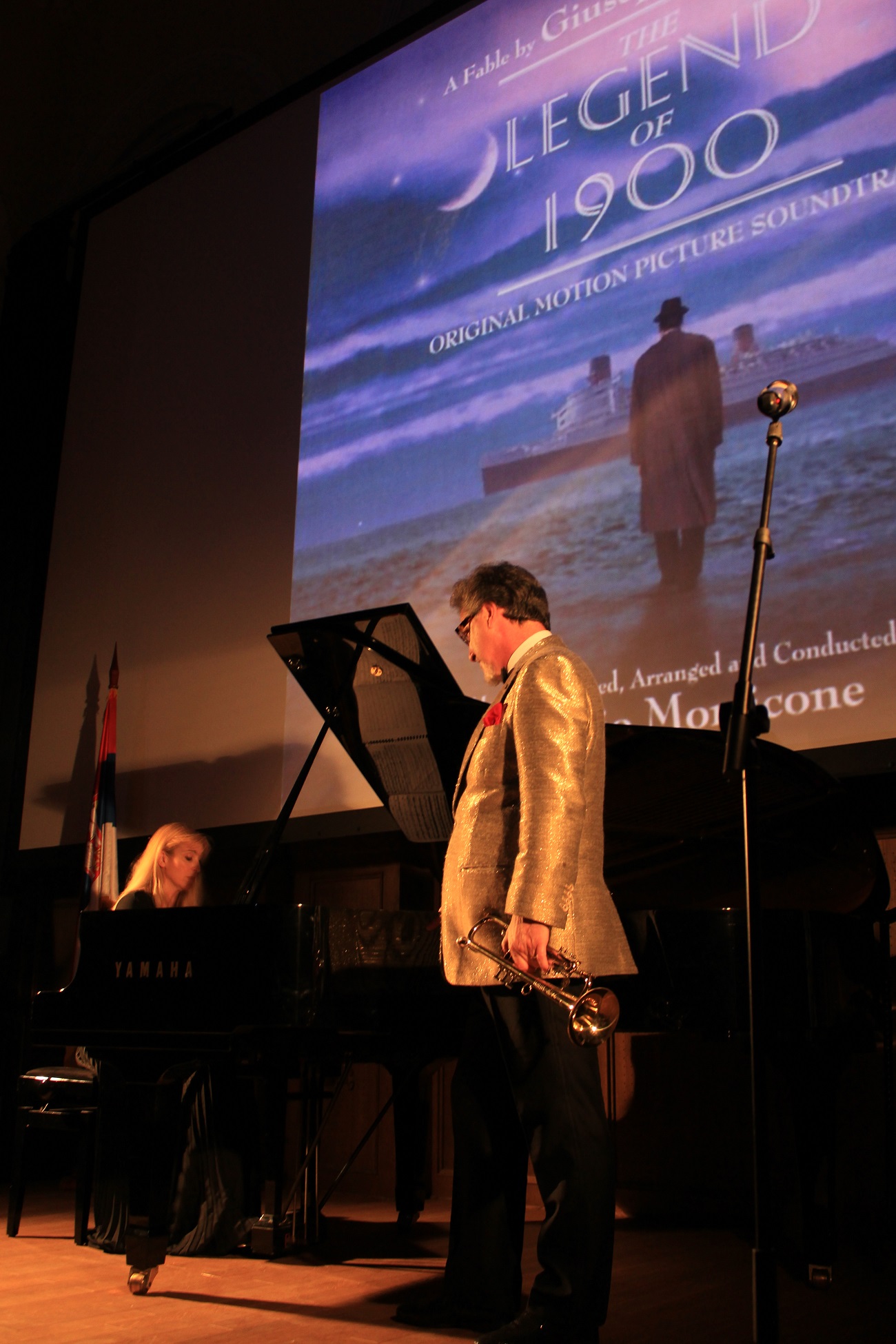 Extremely talented Canadian pianist, Françoise de Clossey, is a prominent soloist and a winner of numerous prestigious awards, such as “Beato Angelico” in 2006. Maur and de Clossey have been playing as a duet since 2003 and they are definitely a favorite act of worldwide audiences and critics as well.

Mauro Maur, fondly referred to as “Pavarotti of the Trumpet”, is known all over the world as the most versatile trumpet player. His repertoire goes from the baroque concerts to the classical ones and from the contemporaries to the great music of the cinema. He is one of the rare musicians that had the opportunity to collaborate with universally acclaimed and legendary film composers like Ennio Morricone and Nino Rota. He worked with Morricone for more than 18 years, who has dedicated many solos of his films to him and also his trumpet concerto named “Ut.” Maur has played in more than 100 films on soundtracks composed by Morricone, Piovani, Ortolani, Goldsmith, and Delerue. At the request of Italian President of the Council of Ministers, Maur was given the honorary distinction of Cavaliere (Knight) dell’Ordine “al Merito della Repubblica Italiana.” From 1985 to 2010, he has been the First Trumpet for the Orchestra of the Opera House in Rome.

From the 22nd to the 25th of September at Jugoslovenska Kinoteka the core section of the Festival dedicated to Italian contemporary movies will take place. It will be presented new movies such as “Vertical Conquests” by Rosa Chiara Scaglione, “In fondo al bosco” by Stefano Ludovichi, “Ritorno alla Vita” by Ilaria Borrelli, “Processo a Mata Hari” by Rossana Patrizia Siclari, “Donne” by Emanuele Imbucci, “Ultima fermata” by Giambattista Assanti, “Prigioniero della mia libertà” by Rosario Errico, “Un Mondo Nuovo” by Alberto Negrin and “The Missing Papers” by Renzo Martinelli who will be present at the screening and will meet the Belgradian audience.