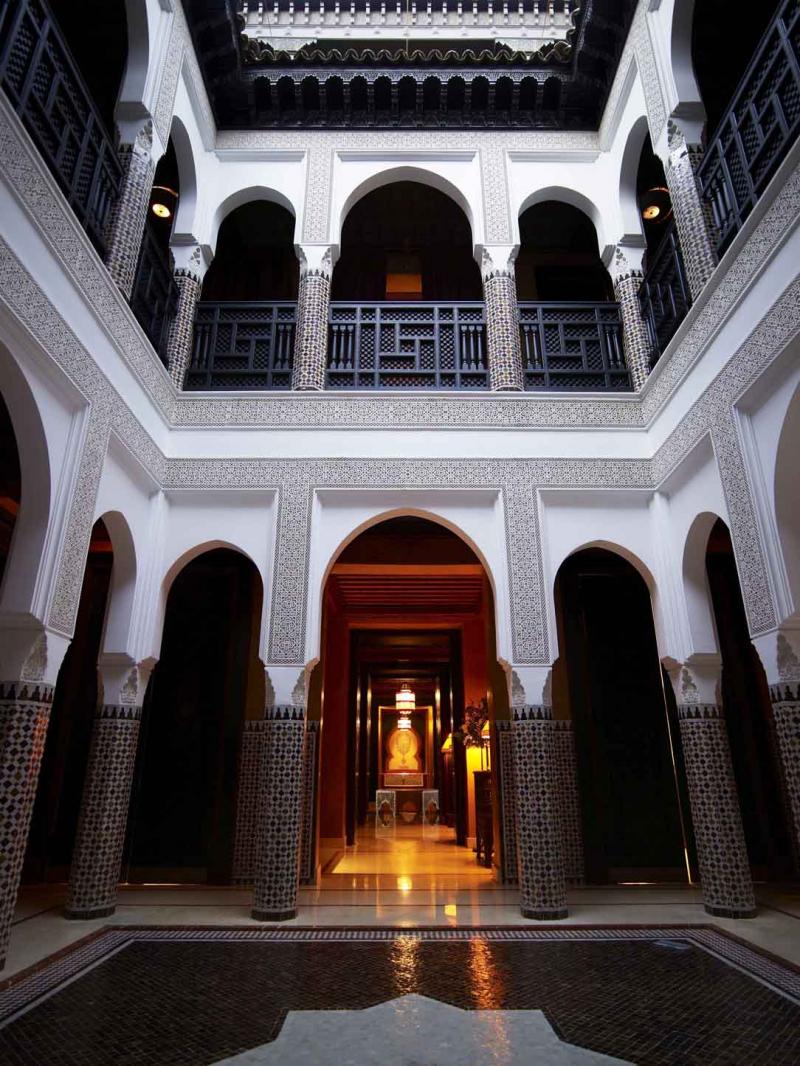 Moroccan food is incredibly diverse, thanks to the country’s Berber, Moorish, Arab and Mediterranean influences. Morocco was well-situated along ancient spice routes, which is why its cuisine is so spice-centric today. There are ten spices that Moroccan chefs mostly use— saffron, cinnamon, cumin, turmeric, ground ginger, black and/or white pepper, sweet paprika, hot red peppers, aniseed, and sesame seed—but there are many more. And the way they use them is an art! We spent an unforgettable evening at Le Marocain restaurant situated in La Mamounia, the iconic luxury hotel in Marrakech, where we tasted modern Moroccan cuisine well orchestrated by the the Head Chef Rachid Agouray. 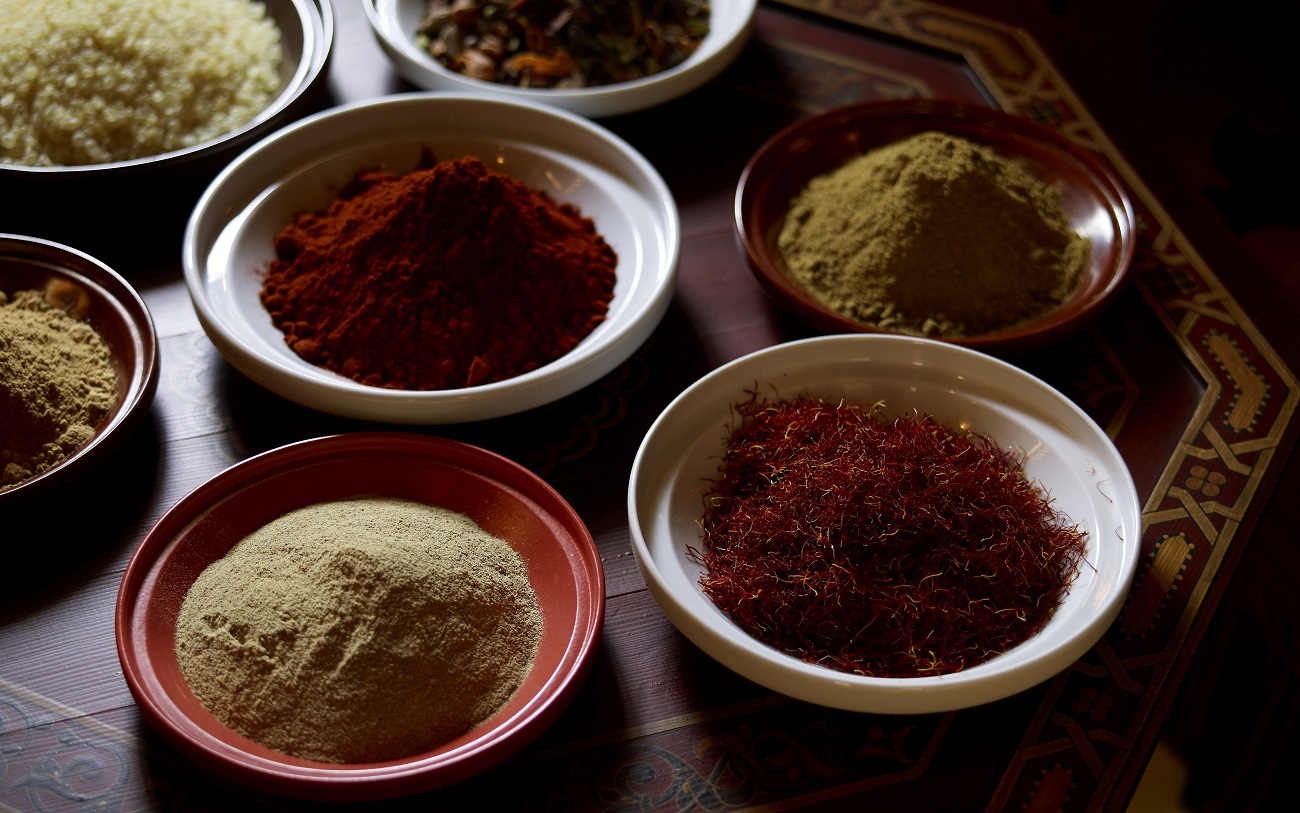 Located in a Riad in the heart of the gardens, Le Marocain is very opulent thanks to artistic vision of French interior designer Jacques Garcia. It is one of the most romantic sceneries we have seen in Marrakech- discreet alcoves create an intimate atmosphere and it was beautiful just to look at the moon and the stars while enjoying La Mamounia‘s wine and a live trio that was playing legendary Algerian chaâbi song “Ya Rayah”. 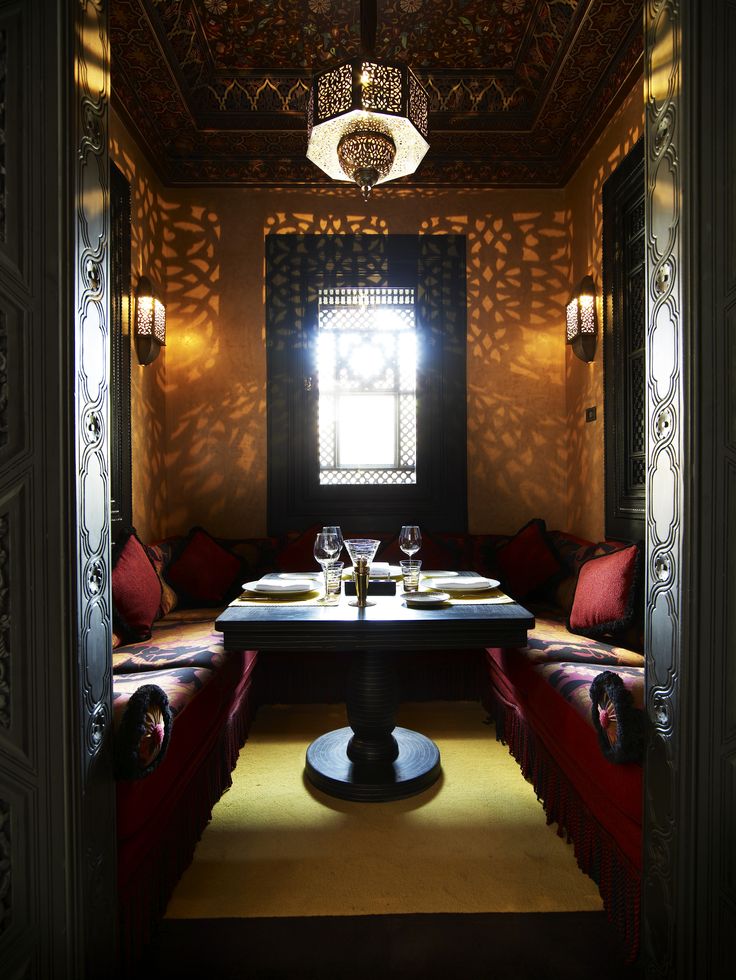 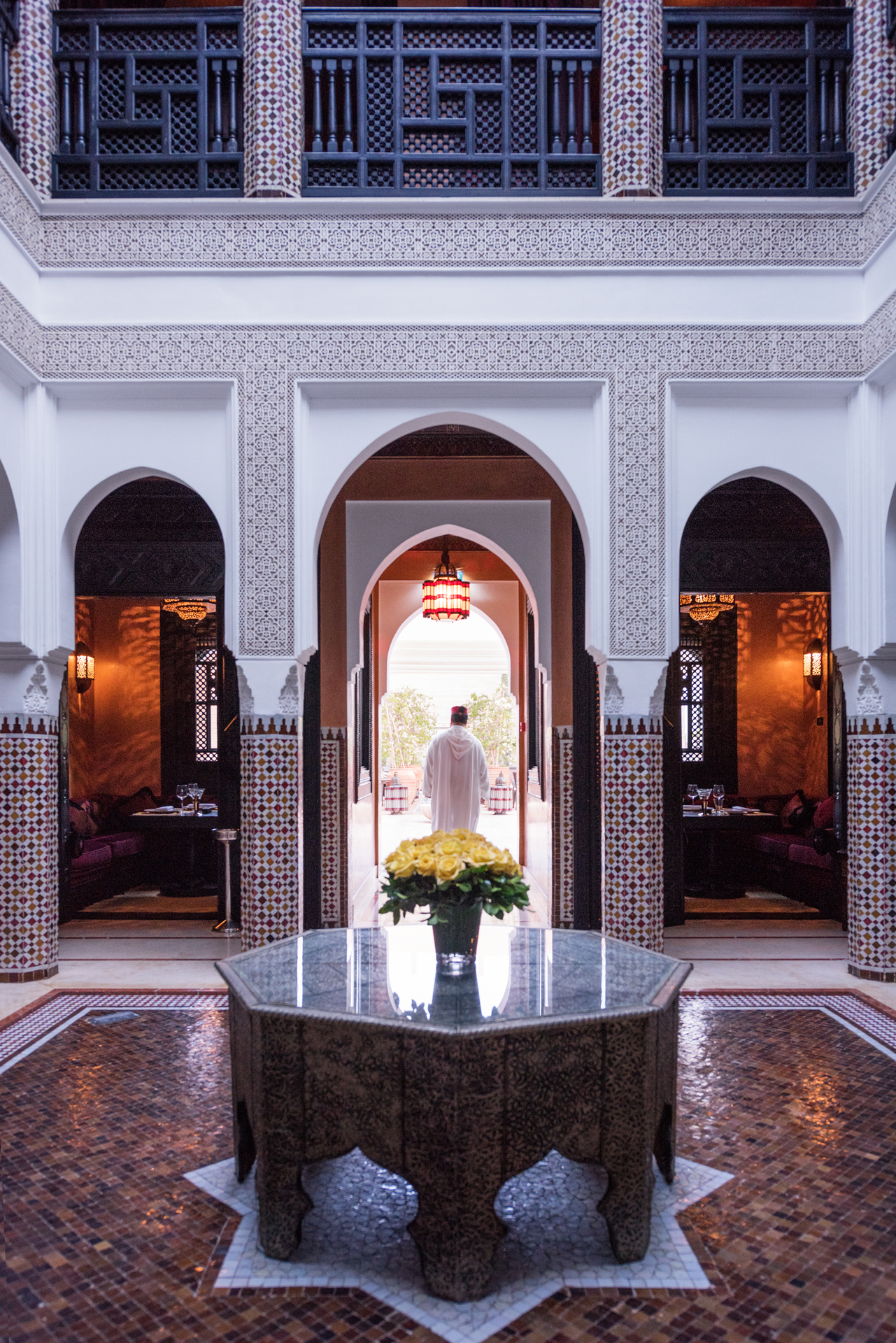 At this amazing restaurant Chef Rachid Agouray, who joined La Mamounia team in 1988, invites you to discover the Moroccan cuisine in all its richness and variety. He is one of the world’s most prestigious chefs who gained experience and fame at prominent venues such as Hotel du Palais in Biarritz, Hotel Cipriani in Venice and Martinez in Cannes. Before Le Morocain, he was at the head of the Italian restaurant and of the Buffet by the pool before the renovation. Chef Rachid Agouray likes to display a wide range of both traditional dishes and revisited Moroccan cuisine. 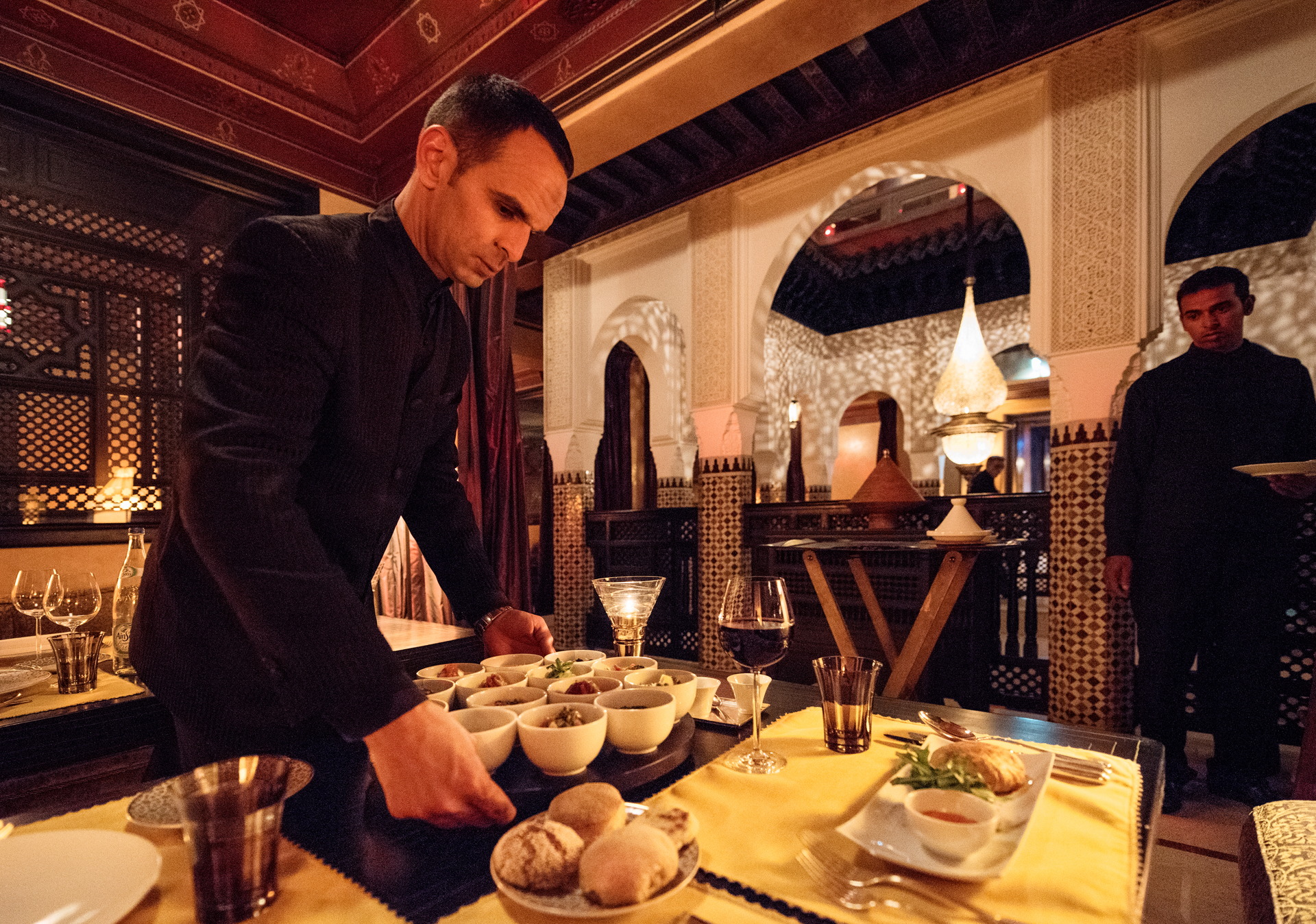 Don’t leave Le Marocain without trying pastilla, tagines, couscous, Moroccan pastries and La Mamounia’s wine. At the restaurant there are plenty of exciting options, a combination between Moroccan classics and adventurous twists and fusions, like the famous pastilla with lobster and spinach. A pastilla is a kind of Moroccan pie, usually with a glazed casing, and this one we had a chance to try and it was delicious. For starter you may also order one of chef’s signature dishes- Langoustine salad with cilantro, smoked eggplant and preserved lemon or Rolled sardine, purslane, olives, garlic and saffron emulsion.

For the main course we ordered Braised beef shank tagine “makfoul” and Couscous with fish and green vegetables. The dish most synonymous with Moroccan cuisine is tagine. The word “tagine” is used to describe both the cooking tool (a shallow clay pot with a large conical top that basically functions as a portable oven) and the slow-cooked, stew-like dish that’s prepared inside. The meat goes on the bottom of the tagine because it requires the most heat, the vegetables are layered on top, and the spices are distributed throughout. As far as what specifically goes in the tagine, the possibilities are vast. At Le Marocain you may also choose:

Couscous is a fine wheat pasta traditionally rolled by hand. It is steamed over a stew of meat and vegetables. To serve, the meat is covered by a pyramid of couscous, the vegetables are pressed into the sides and the sauce served separately. It is often garnished with a sweet raisin preserve, or in the Berber tradition, with a bowl of buttermilk. And the best place to try couscous is definitely Le Marocain because it has various delicious options like:

Chef Rachid Agouray is certainly a chef who never ceases to surprise with originality and creativity. His signature main courses are:

For the desert we highly recommend Moroccan pastries. They have such a magnificent taste and we can guarantee that Moroccans are masters in making them. During our stay at La Mamounia we always ordered pastries with dates. What is interesting is that La Mamounia has developed a signature scent which you can smell everywhere and in its base are also dates. If you would like to order something more light, we recommend Fresh fruit, Jamaican thyme with Mamounia garden fresh herb. La Mamounia‘s pride is its own organic garden and many products that are used in their cooking come straight from it. 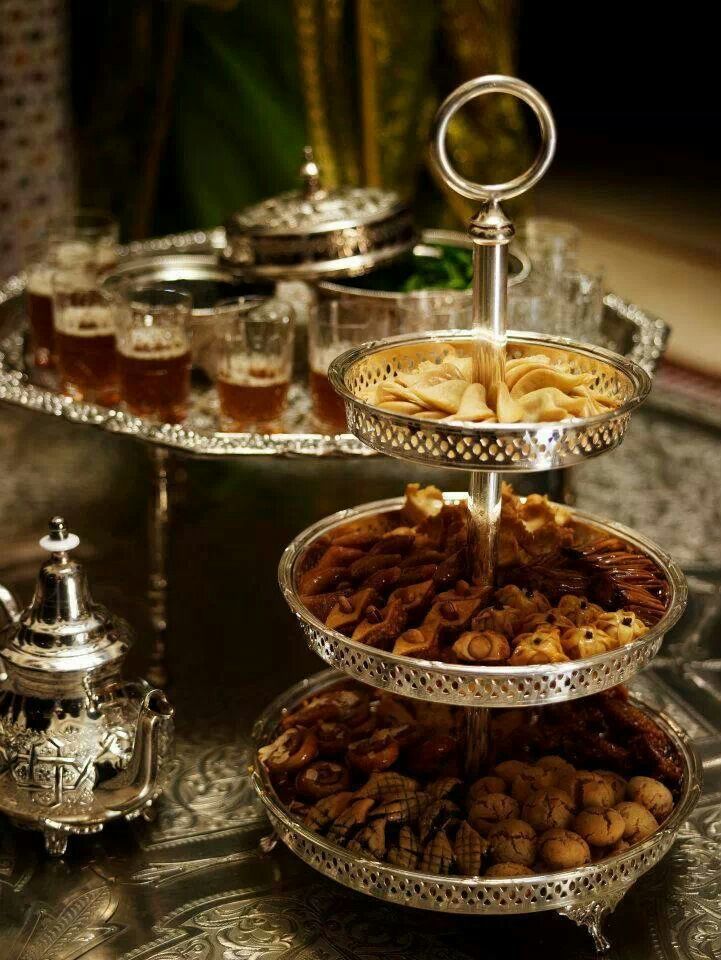