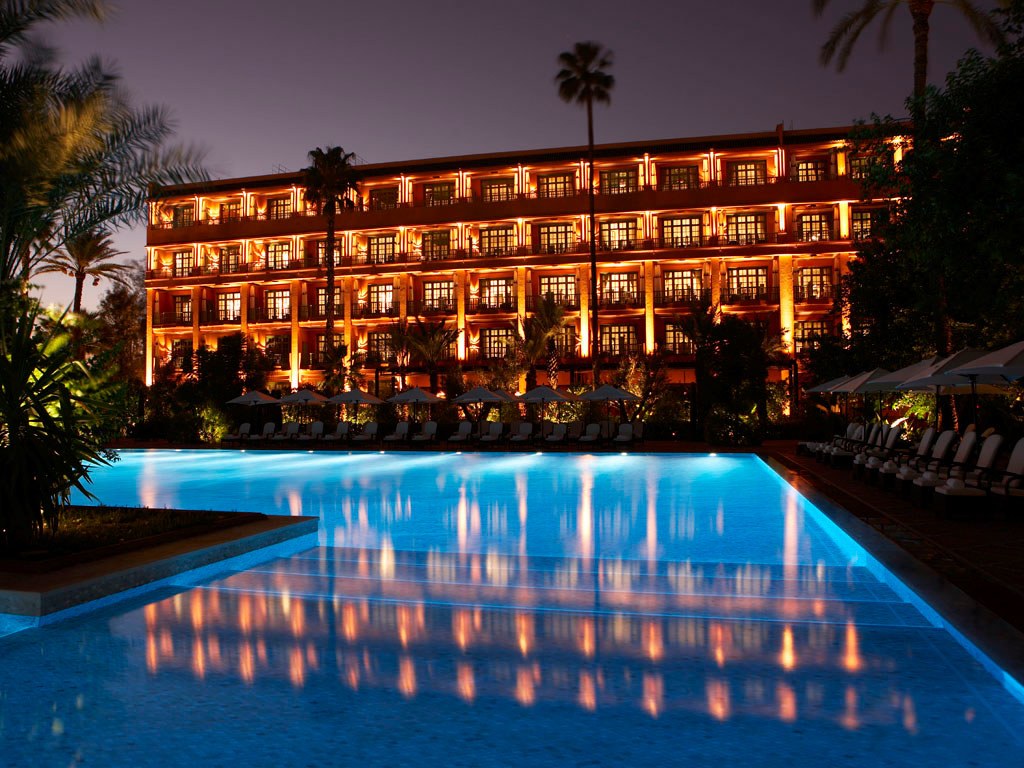 Is it a dream or reality? If it is a dream I don’t want to wake up, and if it is a reality I couldn’t picture it so beautiful as it actually is. This is exactly what I thought when I woke up in my suite at La Mamounia hotel in Marrakech, the place that once charmed Yves Saint Laurent and Pierre Balmain.

The story of Marrakech wouldn’t be the same without La Mamounia, palatial hotel that embodies its history, culture, art… While staying here you are invited to experience the most luxurious place with romantic, mysterious and charming flair that once seduced Yves Saint Laurent and his partner Pierre Bergé. They first came to Marrakech in 1966 and normally stayed here. After one week they decided to buy a home in the Medina. La Mamounia was also a place where Winston Churchill spent many winters painting finest watercolors. “It is the most lovely spot in the whole world”, said Churchill to Franklin D. Roosevelt about Marrakech in 1943. Sharon Stone stayed here recently, and the Rolling Stones. 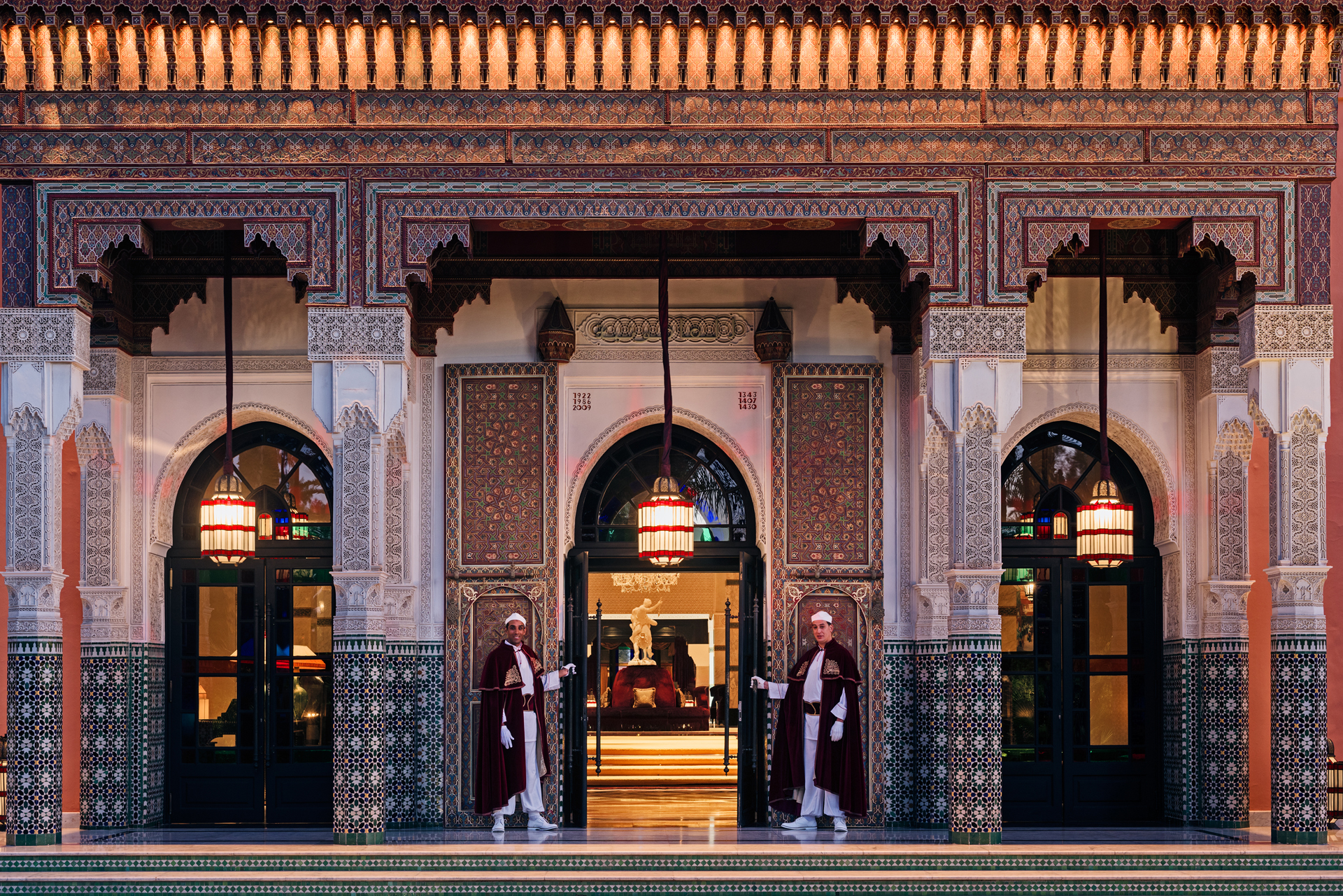 Located in the center of Marrakech, La Mamounia is within walking distance of the famous Djemma el-Fna square and is close to the iconic Koutoubia Mosque. Despite its proximity to the Medina, I felt so far away from the busy streets of the Old City thanks to the hotel’s tranquil gardens. And the garden is the link to the hotel’s heritage: the name La Mamounia comes from an 18th Century-prince called El Mamoun who was given the garden by his father as a wedding present. 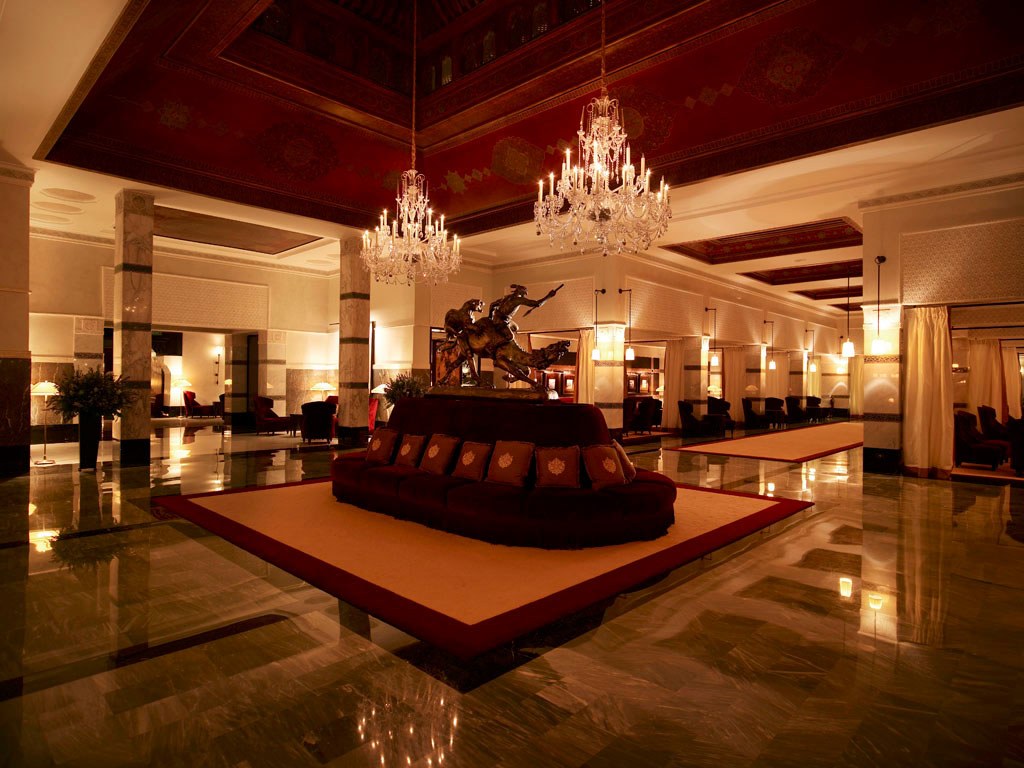 Staying here was like a fairytale “1001 night”. Oriental interior decoration designed by Jacques Garcia was so complex and beautiful in execution that I could spend hours analyzing it. Details from mosaic imagery known as Zellige tilework of green stars, beige octagons, brown 16-point stars, light blue hexagons,… to big central mirror, Bordeaux wine velvet fabrics of the furniture and contrasting prints of green wooden door and carved wooden ceiling. I wondered how many artisans were needed to create these spectacular works of art. I was determined to find out more about Moorish style and architecture. 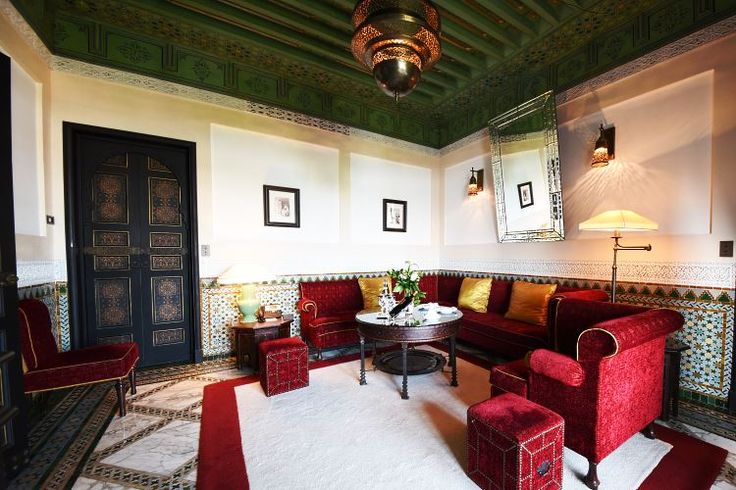 The PR manager was kind enough to explain to me that Zellige tilework is one of the main characteristics of Moroccan architecture. The art is transmitted from generation to generation by maâlems (master craftsmen). A long training starts at childhood to implant the required skills. Zellige is typically a series of patterns utilizing colorful geometric patterns. The complexity and variety of patterns used evolved from simple stars and lozenges in the ninth century, through a variety of 6- to 13-point patterns by the 13th century, and finally to include also 14- and 16-point stars in the sixteenth century. The Zellige tilework in La Mamounia could be seen in Majorelle blue, green and orange. 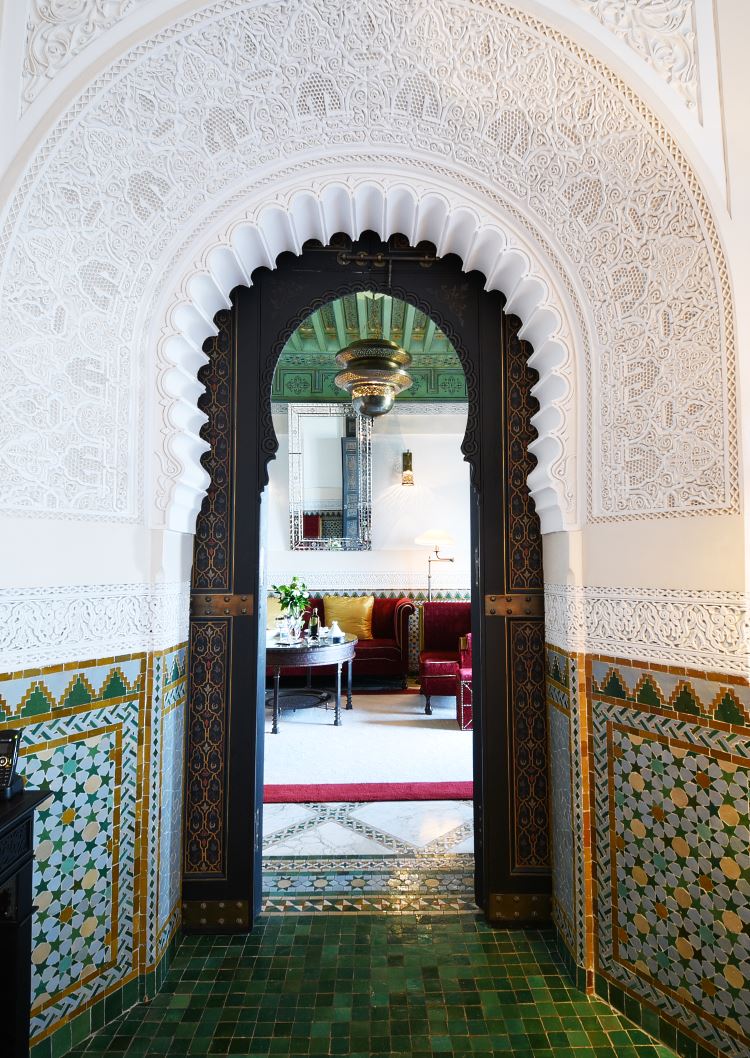 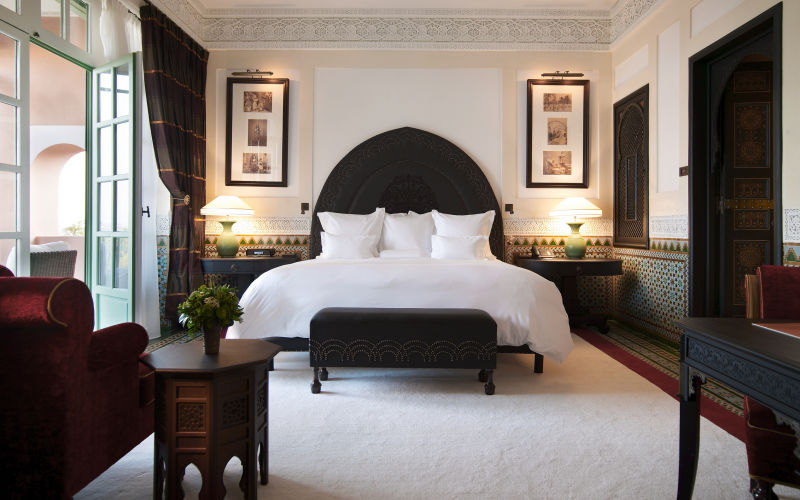 Bedroom of the executive suite

When I stepped out on the terrace I was surrounded by fascinating nature with palms aiming for the sky, olive trees and beautiful flowers. Far away I could see rooftops of the Red city that at night magically shines along with the brightest stars that I have ever witnessed. Everything looked so peaceful and dreamy… Here, I found calming and relaxing haven in the mystic Marrakech. 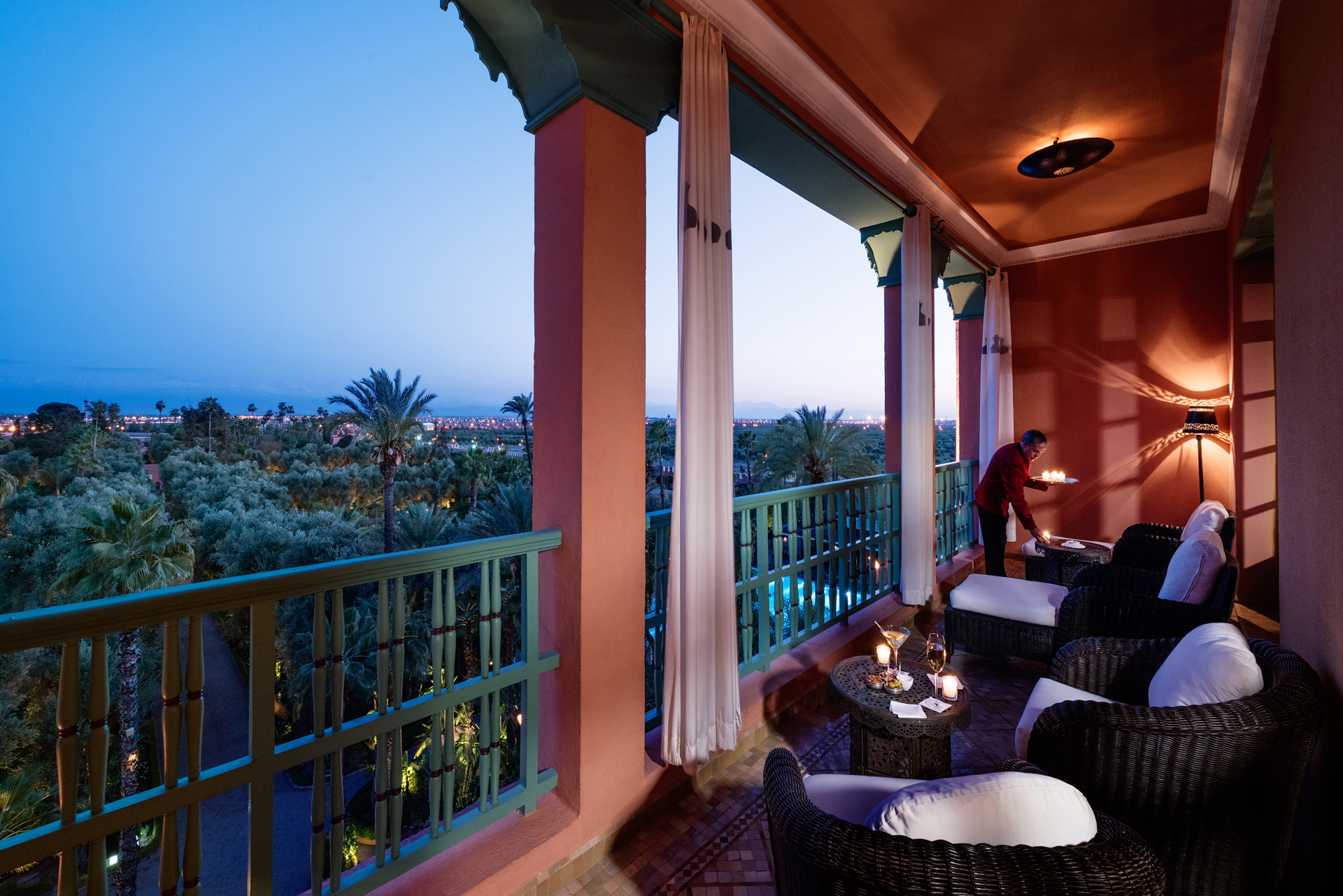 View from the executive suite

There are 206 rooms including 71 suites that have a variety of views: Koutoubia Mosque, the gardens or the Atlas Mountains with the higher rooms having the better perspectives. There are also three Riads set amid the gardens, each of which has three bedrooms and three bathrooms, a private swimming pool and 24 hour butler service. Riads provide ample space for families and big parties with 700 m² to accommodate up to 6 guests. 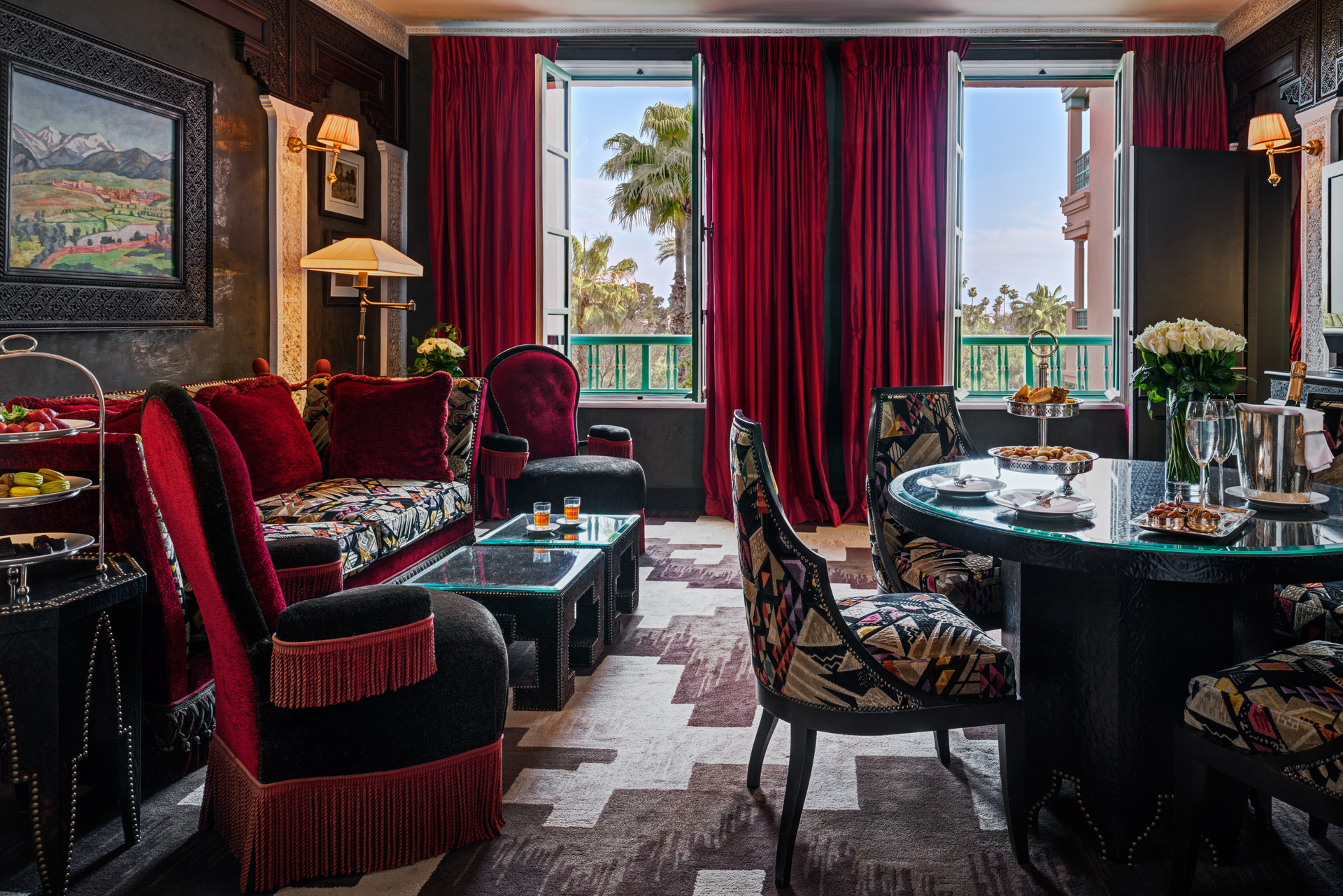 When it comes to dinning experience there is a choice of four restaurants-Le Pavillon de la Piscine, L’Italien, Le Français and Le Marocain, and five bars including The Churchill Bar, named after one of the hotel’s most famous guests. Every morning we had a wonderful breakfast by the pool at Le Pavillon de la Piscine and we spent an unforgettable evening at Le Marocain restaurant where we tasted modern Moroccan cuisine. With its Riad concept, the restaurant is set among palms and olive trees on the hotel’s sprawling grounds. It is one of the most romantic scenery we have seen in Marrakech- discreet alcoves create an intimate atmosphere and it was beautiful just to look at the moon and the stars while enjoying La Mamounia‘s wine and a live trio that was playing legendary Algerian chaâbi song “Ya Rayah”. 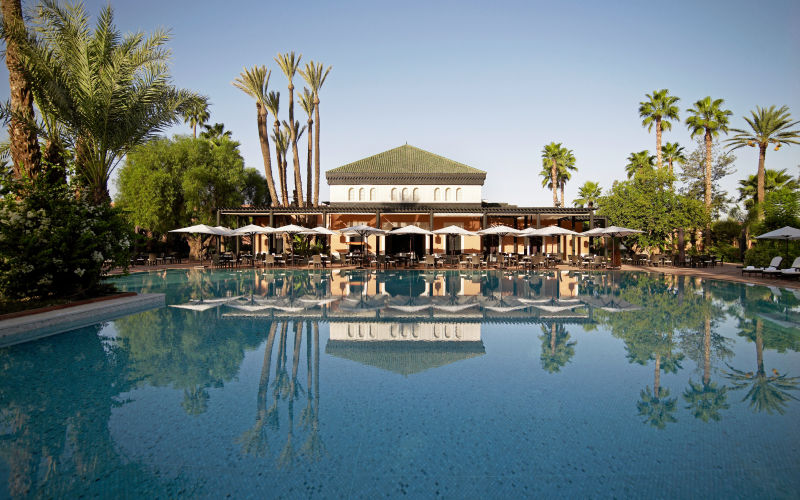 During the day we had wonderful time by the pool and if we wanted to boost more energy we gladly visited the well equipped gym and the spa. The gym is colored in a distinctive cobalt blue that became the trademark of French painter Jacques Majorelle. Within the gardens there are two immaculate red-clay tennis courts. For the lovers of beautiful clothes you may find Dior‘s boutique at the ground floor but also Saint Laurent‘s shoes and bags. There is also a brand new boutique dedicated to La Mamounia products. 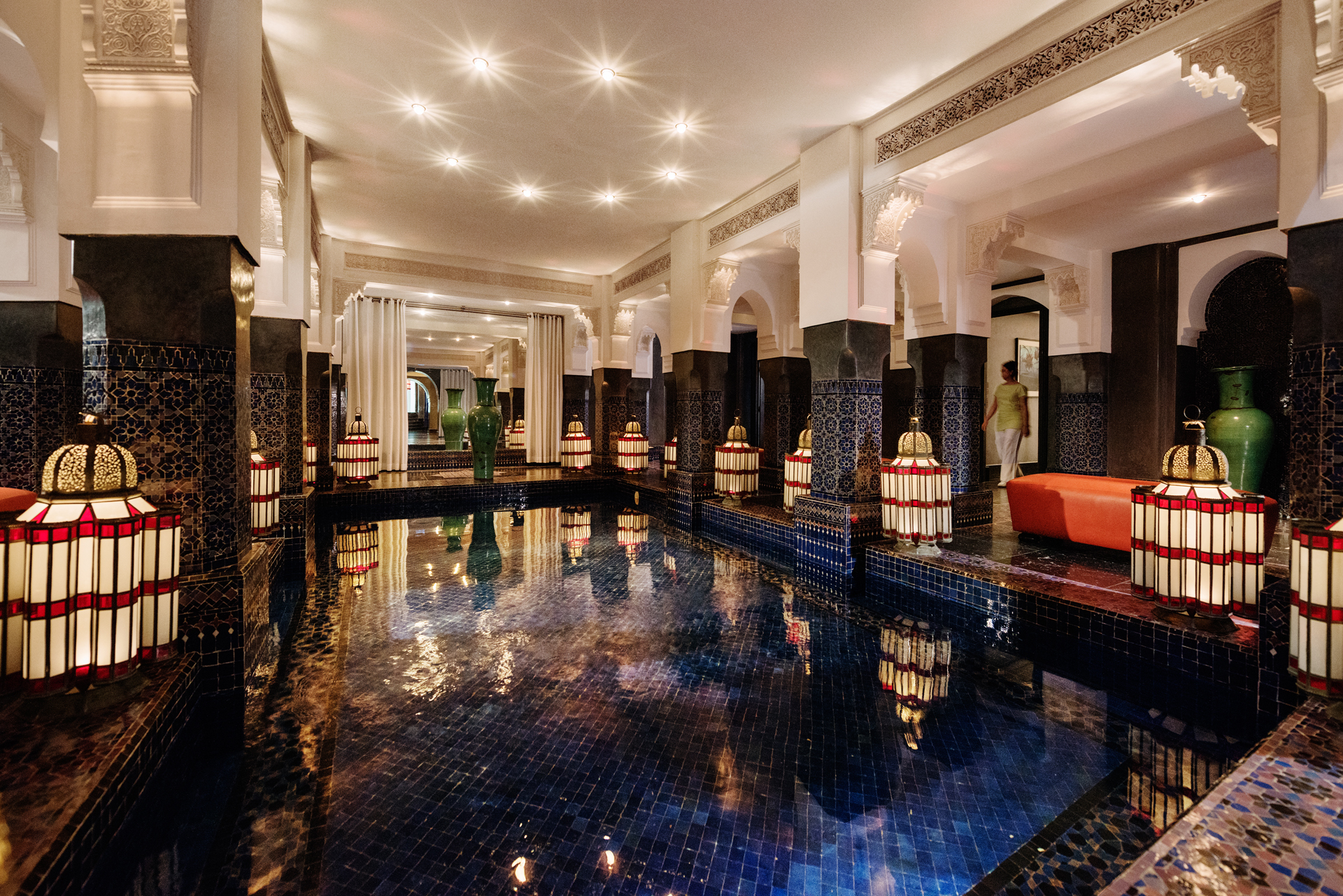 The atmosphere in the hotel is very serene in a unique La Mamounia‘s way. When you are walking trough different parts of the hotel you may hear specially composed music and sent an exclusive perfume of dates, roses and cedar wood that was mixed by one of the world’s most famous noses to scent the air. 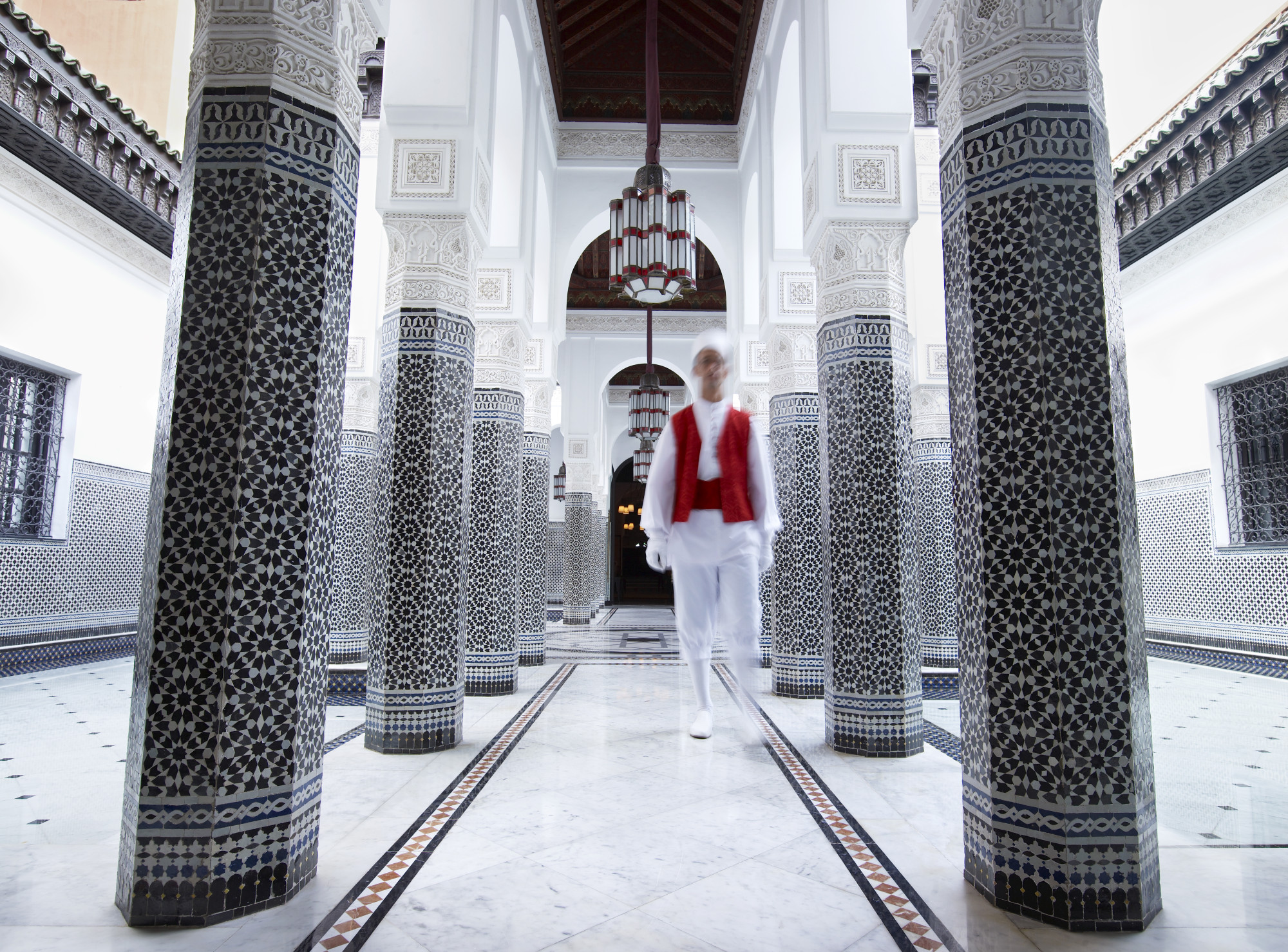 Over the years La Mamounia has attracted the attention of both French and American filmmakers. Jean Tissier filmed “Alerte au Sud” with Eric Von Stroheim in 1953. Hitchcock’s film, “The man who knew too much” was also filmed there. Along with fashion luminaries, actors, models and international style-setters the hotel was gladly visited by Salma Hayek, Orlando Bloom, Eva Mendes, Miranda Kerr, Jennifer Aniston, Gwyneth Paltrow and Juliette Binoche. During our visit we met very talented designer and creative director of Ports 1961, Milan Vukmirovic, who came to Marrakech to shoot one menswear editorial. 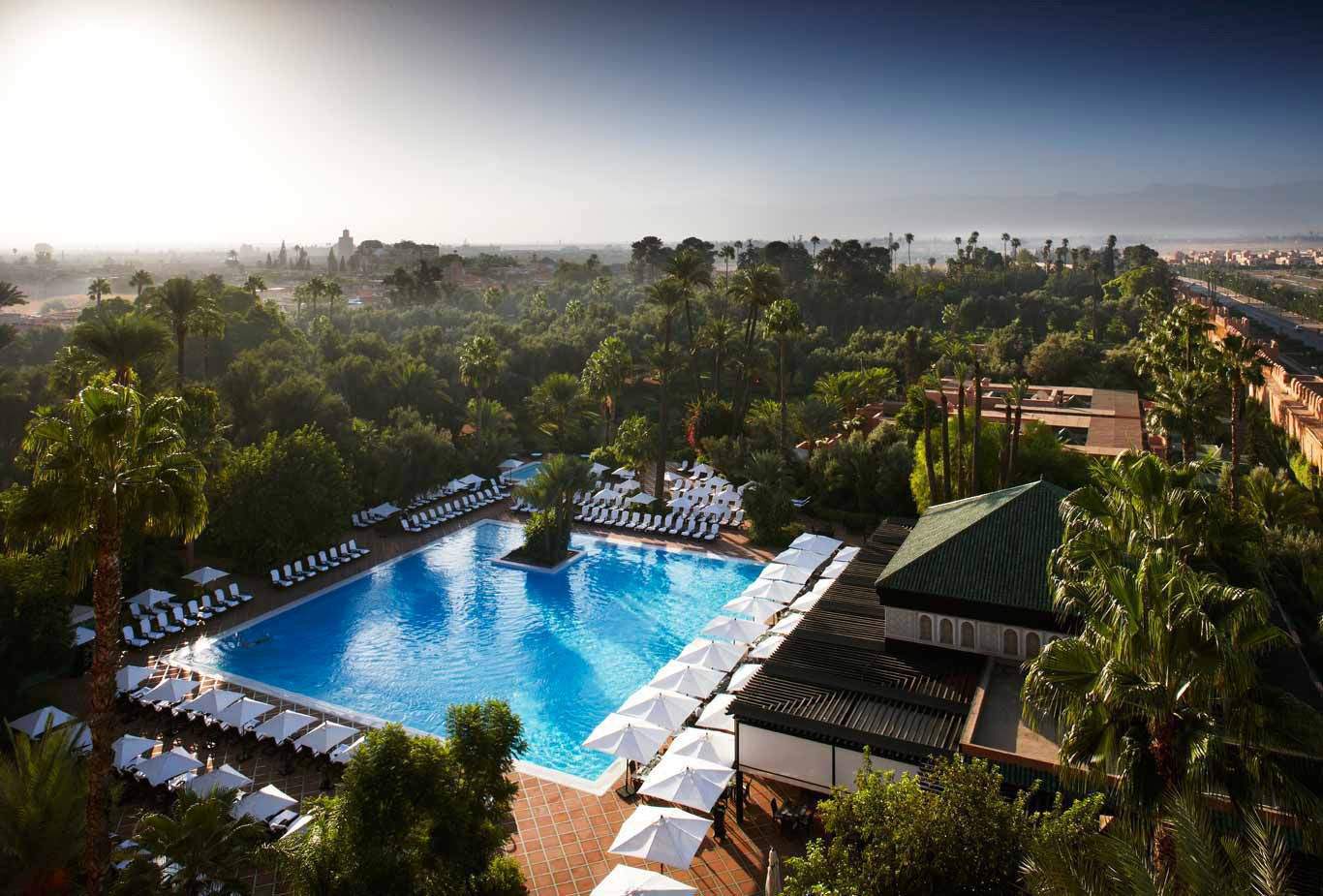