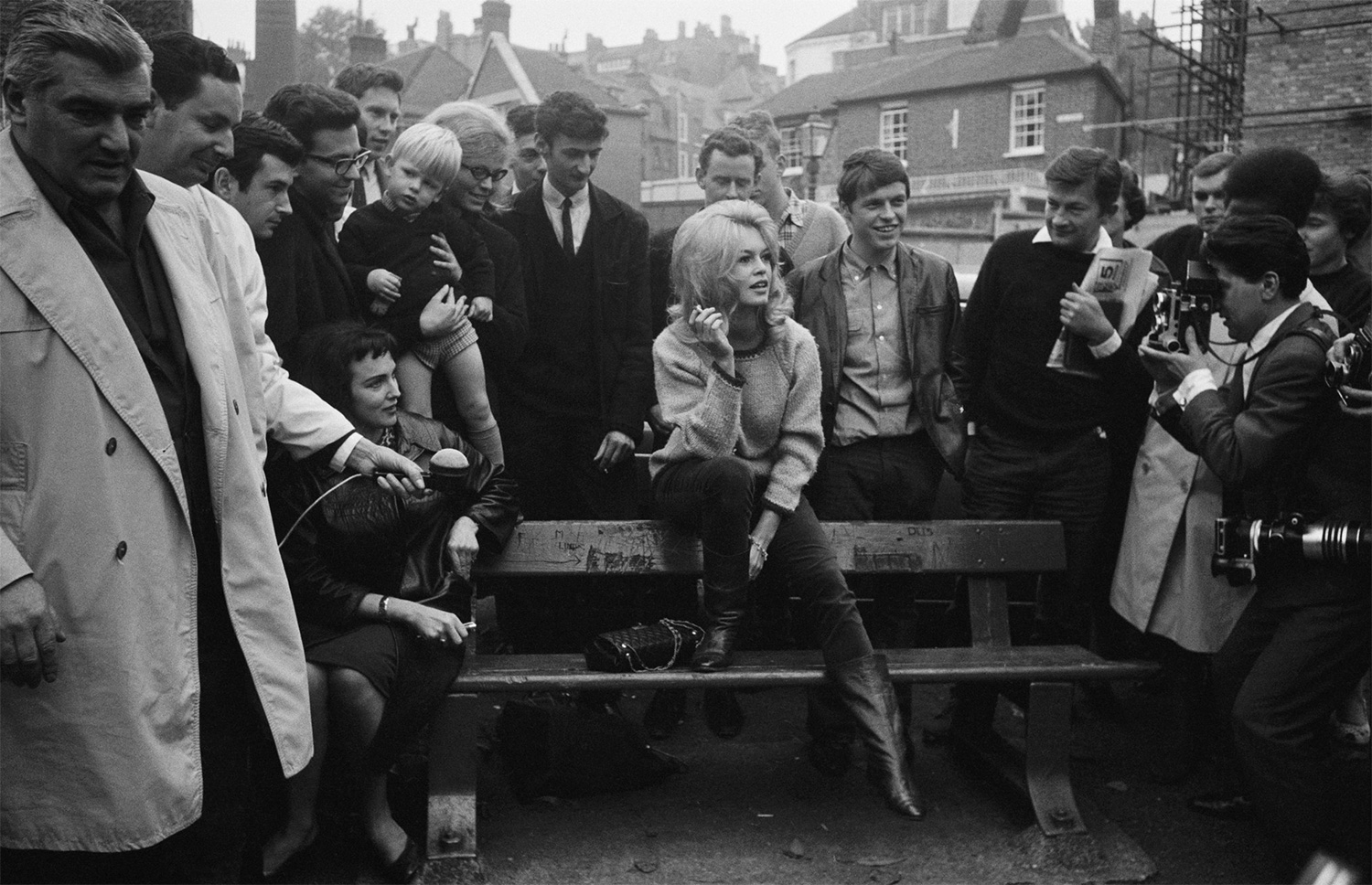 Far more than a classic, it’s an icon. A real stylistic break, initiator of a new, liberating and modern gesture, the iconic Chanel handbag is pure concentrated dream, a step-by-step story, a minutely fashioned luxury. 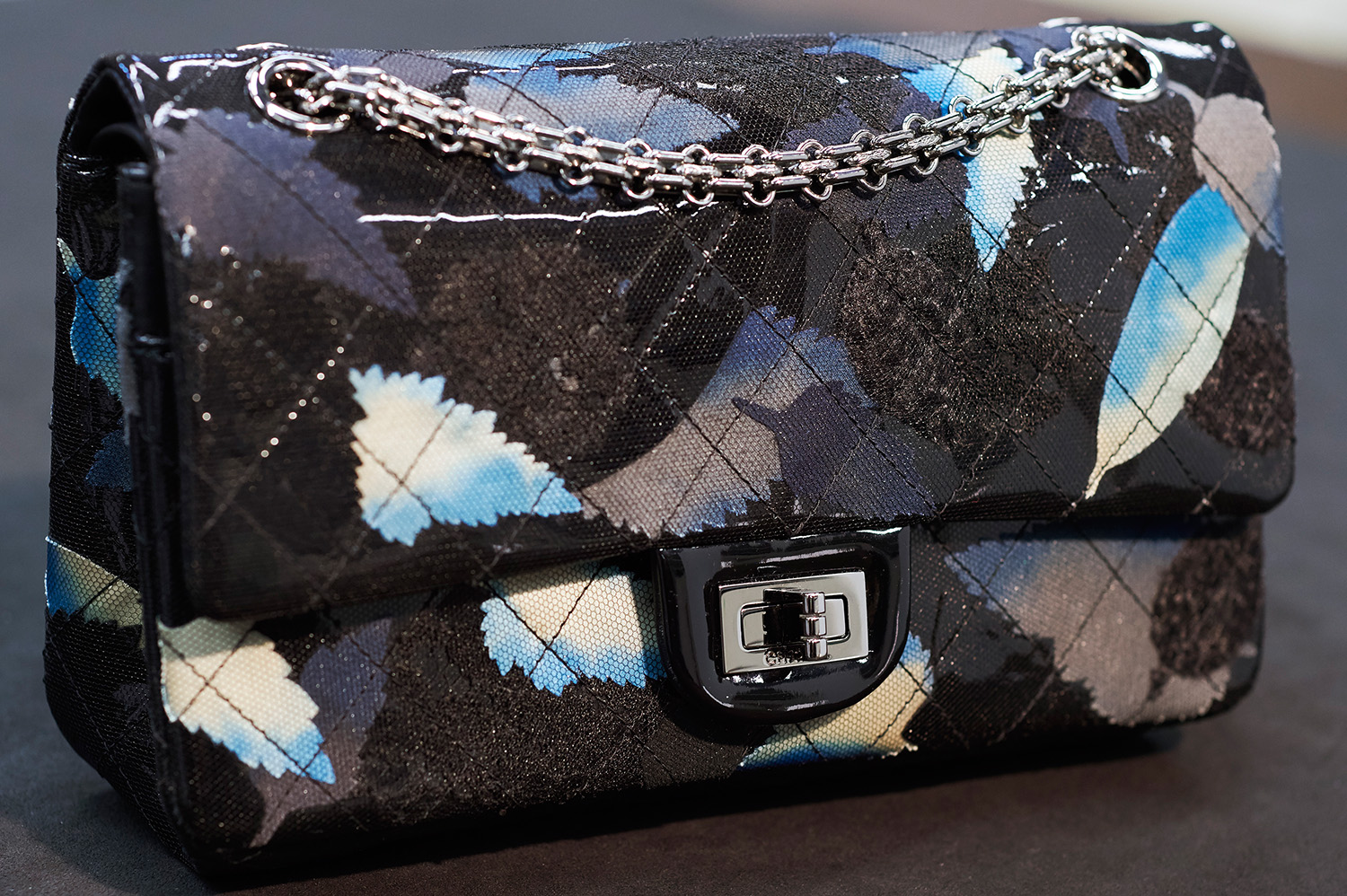 In keeping with her usual habit of working, Gabrielle Chanel created the bag because she needed it herself. A natural visionary, the designer was always on the lookout for novel ideas inspired by her daily life. She appreciated the ease and freedom of movement that the military strap bag or binoculars worn across the body that she wore at the races provided: one could put one’s hands in one’s pockets, and strike a free and determined pose. And so in February 1955 (the eponymous date of the mythical bag 2.55), the designer imagined a bag of timeless beauty, astutely designed on the outside as well as the inside and therefore as beautiful inside as out. Carried on the shoulder with a chain interwoven with leather ribbon or with rows of flat metal links (a little reference to the chain that Mademoiselle slipped into the bottom of her suit jackets to ensure they’d fall correctly), the 2.55 not only freed up the hands, but also harmoniously followed each body movement. On the exterior, the lambskin, jersey and silk which surrounded the bag were overstitched with “diamond” quilting in rhombus shapes to give it body, volume and bearing. The quilting was inspired by the equestrian universe that Gabrielle Chanel loved so much, especially the jackets worn by the lads at the races. 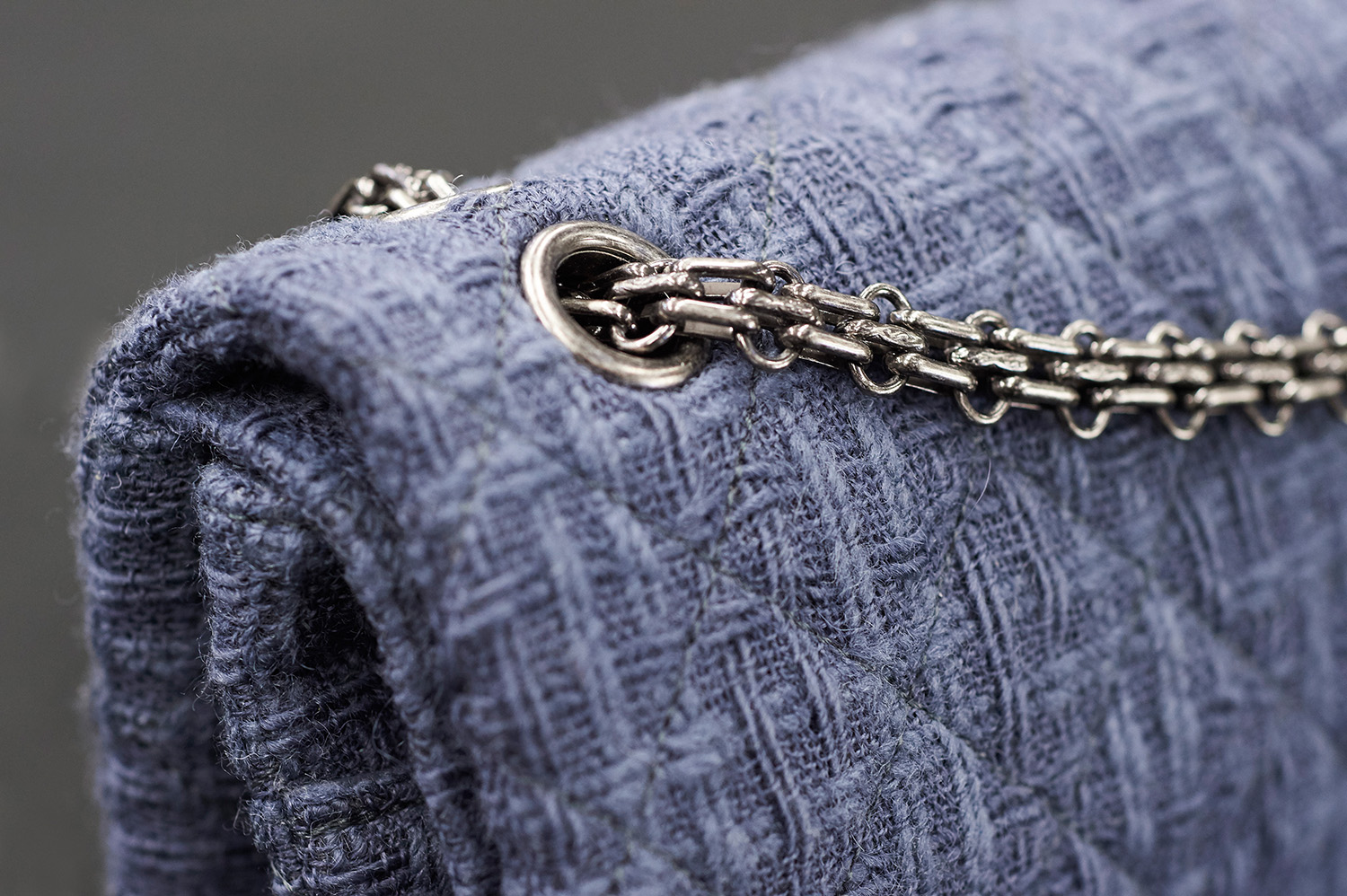 Even today, the design of the 2.55 still follows the first partitions dictated by Gabrielle Chanel in 1955. First of all, its pockets, seven to be precise. The first, at the back, is rounded like “Mona Lisa’s smile”, its nickname. The six others are on the inside of the bag : gusseted pockets for visiting, credit cards or powder boxes, a pocket case specifically designed for lipstick, a zipped pocket called the “secret”, and finally the two large pockets for letters or other documents. The garnet leather reminds one of the color of the uniform Gabrielle Chanel had to wear at the Aubazine Abbey orphanage. It provides yet more commodities to the bag, as objects are more obviously visible against the bright color. Lastly, still on the inside, the double C is overstitched onto the fold. One final detail: a rectangular twist clasp, called the “Mademoiselle” clasp, which was then joined, several years later, by a second one, a double C, which became as legendary, and which led to the creation of a bag that the House called the 11.12. 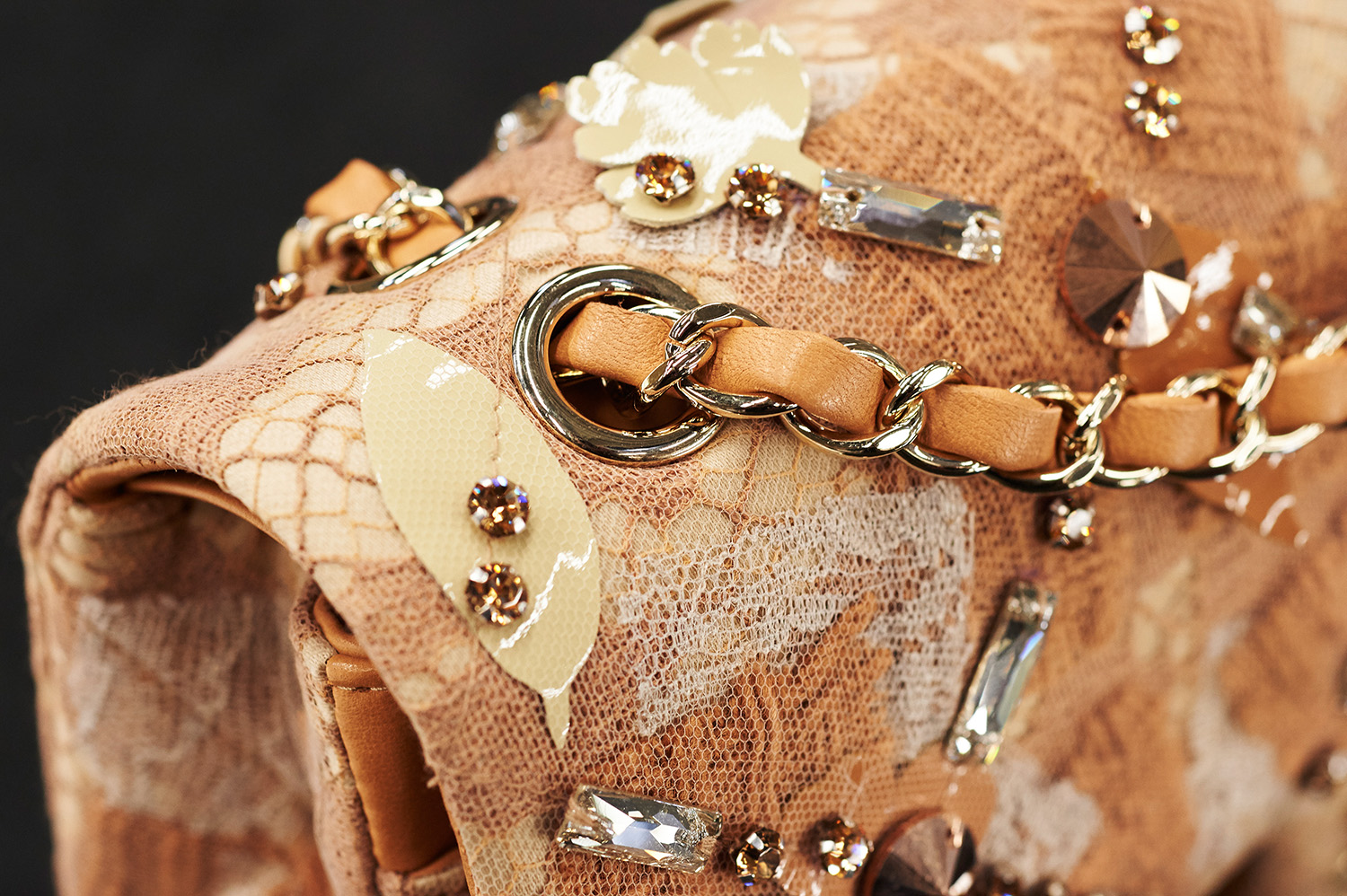 Every season, Karl Lagerfeld metamorphoses the iconic bag. The original materials are now joined by aged or grained calfskin, tweed, precious embroidering by the Maison Lesage, denim, varnished leather, velvet, alligator or python… the effervescent creativity of Karl Lagerfeld can also transform the clasps into jewels of a rare preciosity, such as the 2.55 in alligator presented in 2008, the clasp of which, in white gold, was paved with 344 diamonds. Lagerfeld has also added chevron quilting to the original diamond quilting. Continually enriched with such new propositions, Chanel‘s iconic bag family is instantly recognizable, symbolizing elegance, excellence and know-how. The iconic Chanel handbag is pure, concentrated luxury, demanding over 180 manufacturing operations and as many minute gestures – each stage overseen by strict quality control – and up to fifteen hours’ production in one of the five workshops of the Chanel production unity, situated in the middle of a haven of greenery in a little town to the north of Paris. It takes four to five years for each craftsperson on the site to learn how to perfectly master the techniques necessary for the manufacture of one iconic Chanel handbag. 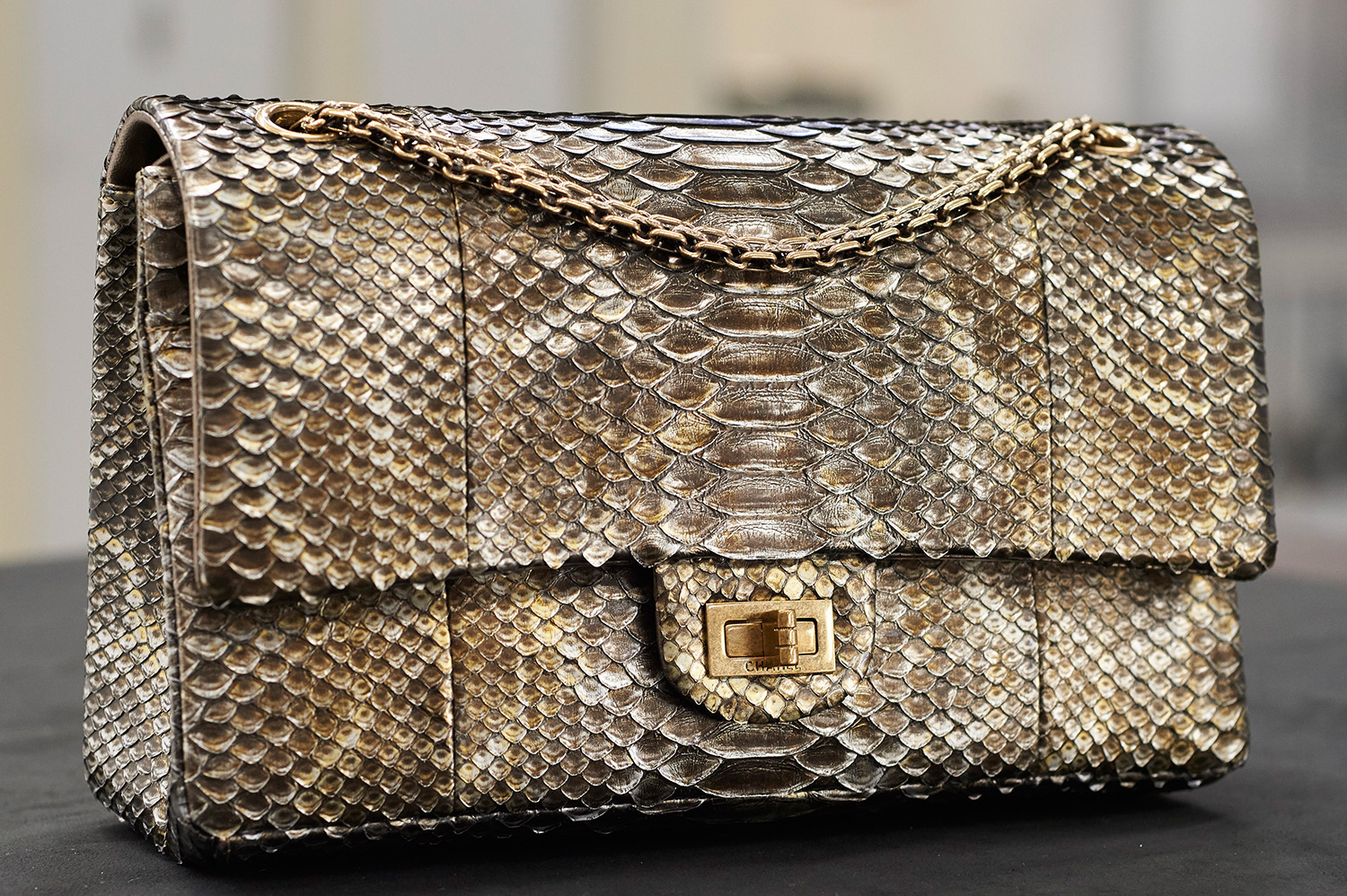 Even selecting the skin requires absolute skill. The origin of each skin is rigorously controlled, the House only uses tanners whose absolute know-how is a reflection of Chanel‘s values of excellence. Each skin must be perfect and of an exceptional quality, in response to a strict list of criteria. They are checked one by one and undergo several tests in the laboratory: resistance to tensile strength, weather conditions, rubbing, dyeing…The manufacture can then begin: the cut of each piece of the body of the bag is made according to a template outlining the pattern. The challenge of the cutter is to find the ideal points of the cut so that each piece is perfectly placed and lined up once assembled. The process can be particularly delicate for an exotic skin (the scales must follow one another) or even for tweed (the patterns must be impeccably aligned. One by one, the pieces are then “pared down” or thinned out, to prevent any eventual roughness due to the seams. Once prepared, the pieces are then ready to be quilted using a needle (except for exotic leather) and then assembled. Meanwhile, the double C will have been stitched onto the flap. First mounted flat and inside out, like a Ready-to-Wear piece, the bag takes on volume little by little. The body and base are brought together with the “bag in bag” technique: a first bag is mounted to constitute the interior and then a second for the exterior. Each one is assembled by hand. The craftsperson can then turn the bags inside out. Sewn with “point de bride” seams on the sides, the two bags are then reunited and become one. The finishing touches (the hand plaited chain, piercing the hook and eyes, crimping and placing the clasp) demand several other delicate manipulations before the final control and wrapping, the ultimate ritual of minute delicateness. 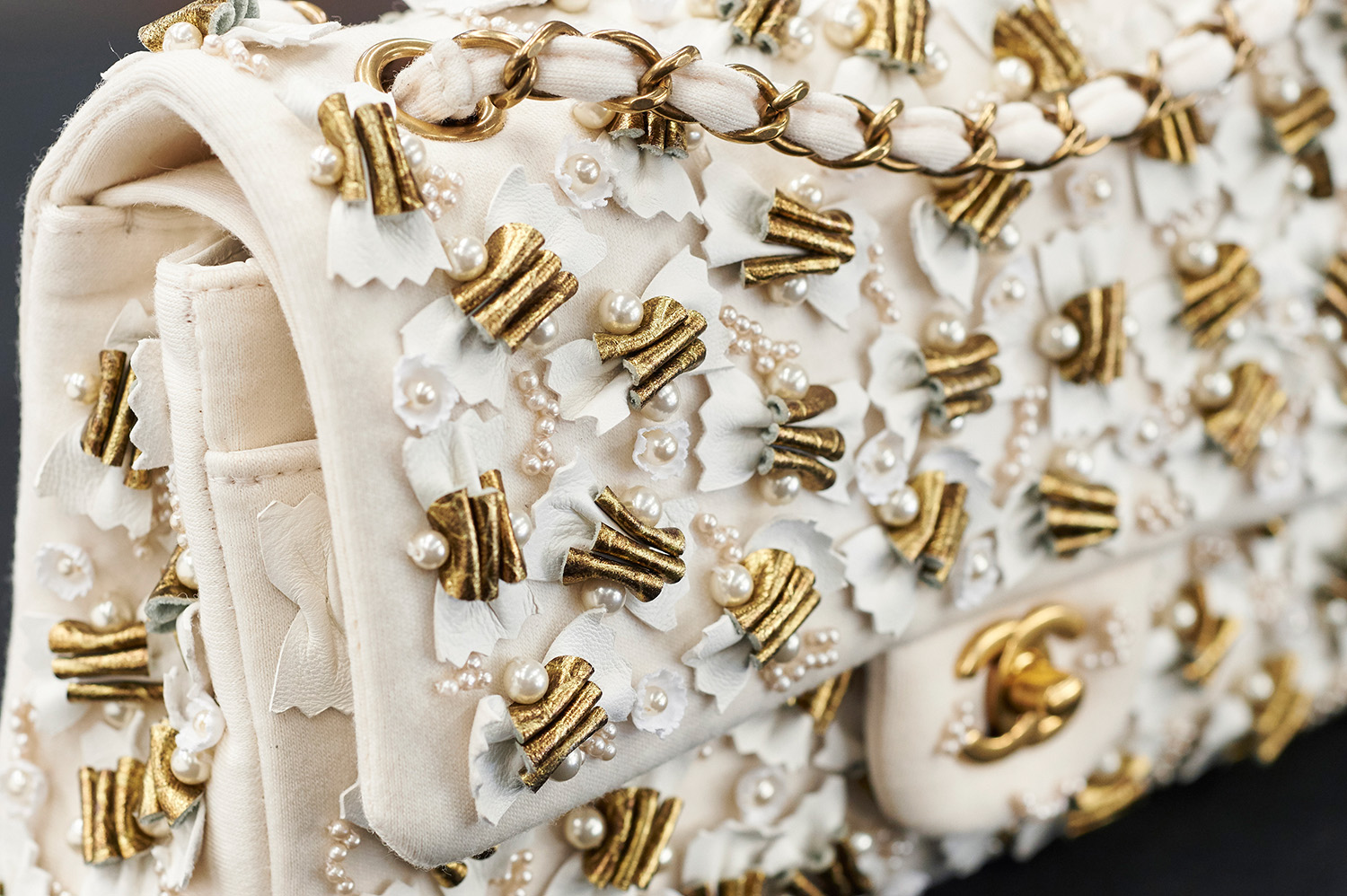 Gabrielle Chanel‘s genius idea, Karl Lagerfeld‘s boundless imagination, and the expert luxury craftsmanship make up the magical trilogy which explains the desire that the iconic Chanel bag has inspired since 1955. Like a sentimental object, it’s part of a heritage that is transmitted from a mother to her daughter. It carries emotion, is infused with a real soul, and has revealed that it can defy time and style. As Gabrielle Chanel used to often remark : “Fashion becomes unfashionable, style, never”.