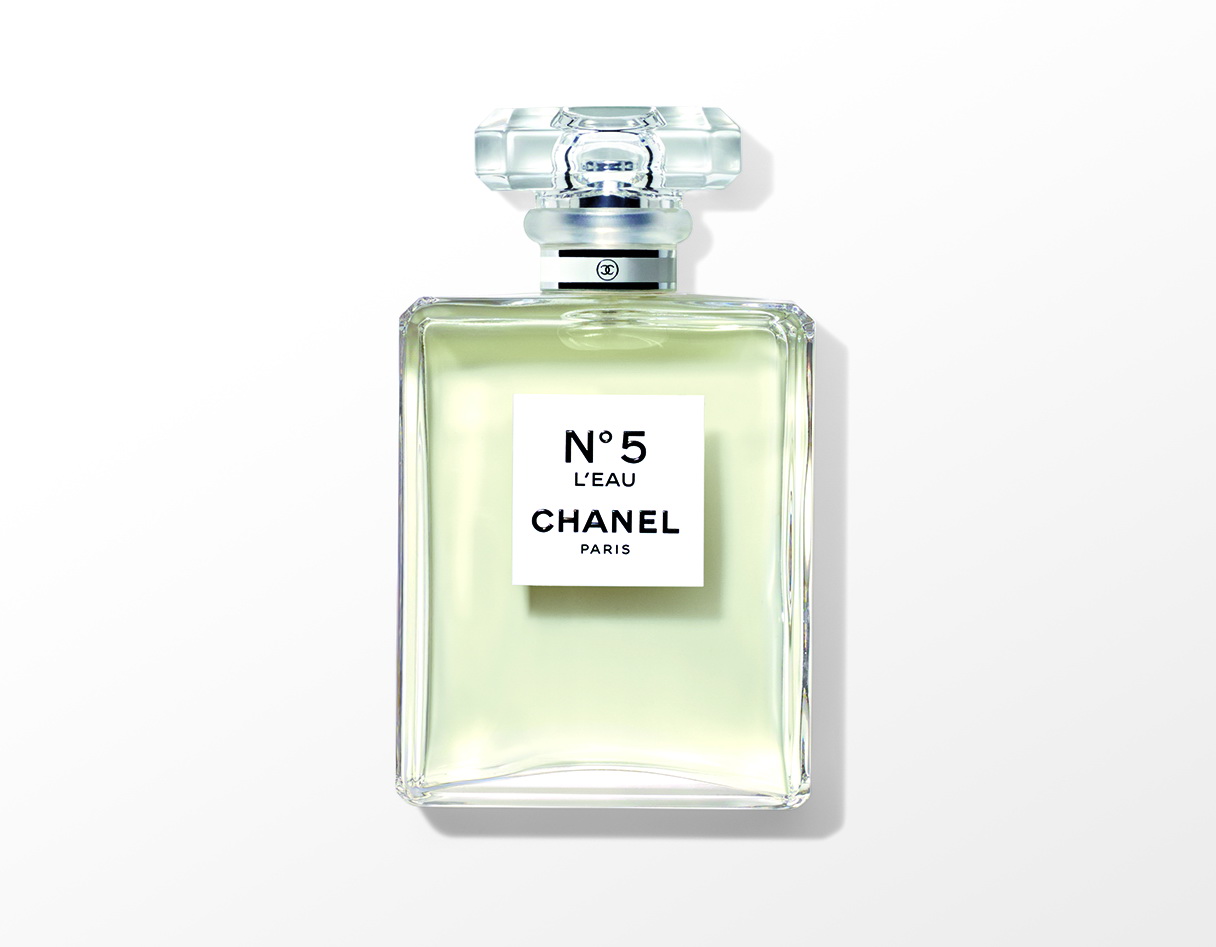 The spirit of its time

With its iconic, code-like name, it ushered perfumery into a new era. Fragrance was suddenly authorized to mix faux and fine, jersey and fur, flowers and aldehydes. Indefinable and eternally enigmatic, N°5 is not a fragrance. It is an olfactory heritage: a certain idea of femininity, a masterpiece of chic, passed on from generation to generation. But it is above all the signature scent of pure modernity. Like a Bauhaus, it is fully in step with its time, and yet always manages to keep one step ahead. The founding fragrance of Chanel creation, N°5 has never ceased to inspire the perfumers of the House. Over the years, each one endeavored to protect its formula, to master its mechanics, to guarantee the provision of its rare materials, and to understand its revolutionary character. Remaining true to its strong inner nature, they have each tried their hand at the same exercise in style, creating their own interpretation. In 1924, only three years after the creation of the Parfum, Ernest Beaux interpreted it as an Eau de Toilette. In 1986, Jacques Polge created the Eau de Parfum. Steadfastly 5 and totally new. Twenty-two years later, he dared to breathe new life into the formula with Eau Première. Now, in 2016, it is perfumer Olivier Polge’s turn to capture the essence of his time with the creation of N°5 L’Eau. A fragrance of the here, now and always. 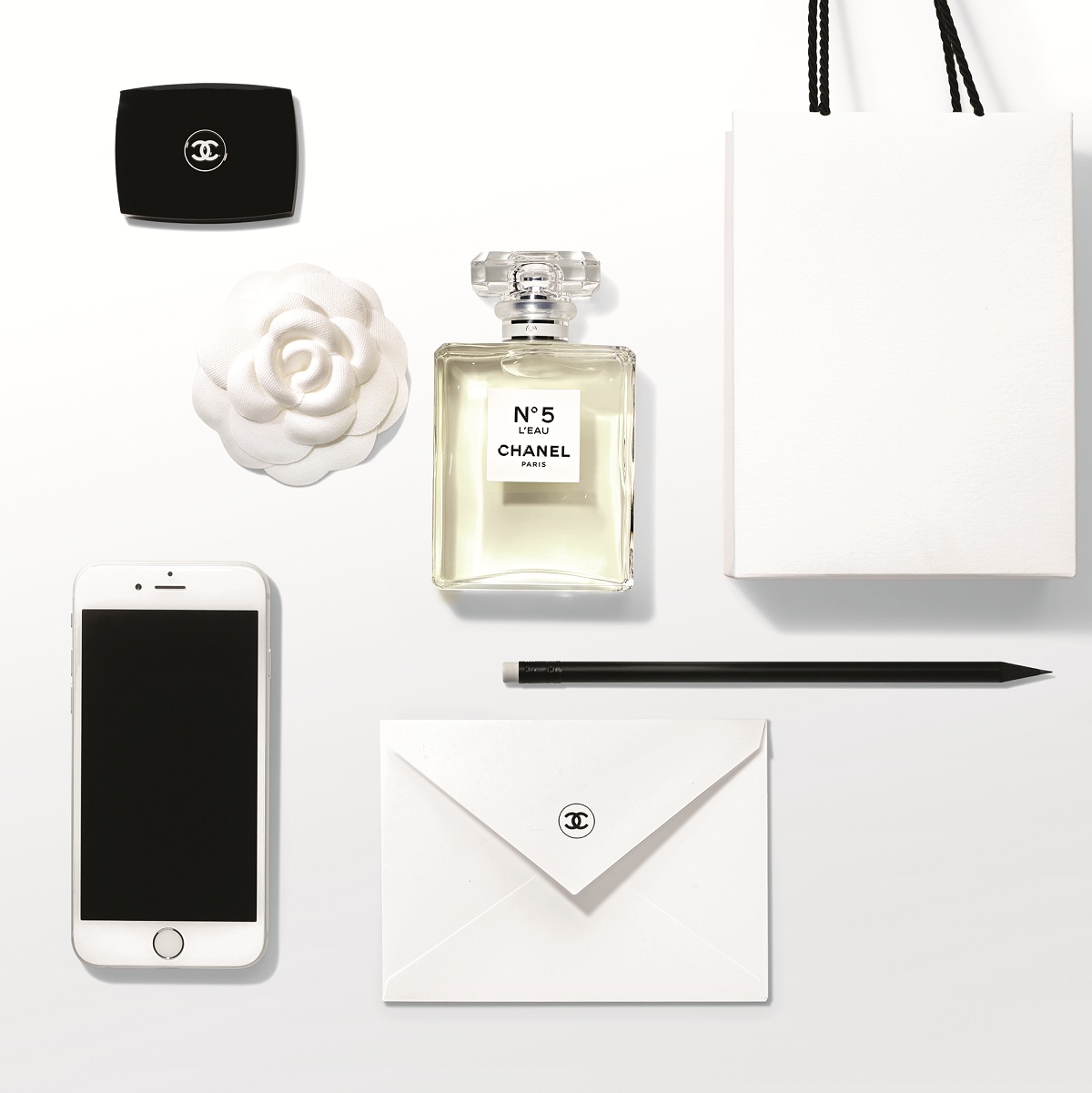 The mechanics of epure

An exercise in style requires a monumental work. With L’Eau, N°5 demonstrates, yet again, the extent to which its structure is flawless. Inspiring. And just. But how does one appropriate such a grand fragrance? Or allow oneself the audacity to alter a fragrance that has pervaded all the smells of childhood, a fragrance that is instantly recognizable? With the subtle touch of a goldsmith, Olivier Polge strove to create a new balance and an ideal dose of freshness. The way one might examine all the watch making parts of a complication, he dissected the original formula and took hold of each ingredient to understand its true role. Giving preference to aldehydes with the scent of orange rind and abandoning the more metallic ones. Increasing the vibrancy of the zests and removing the powder from the base. Rendering the woods more dynamic and adding green to the ylang-ylang. Making the jasmine as light as air and decreasing the vanilla. Respecting its history while looking to the future, Olivier Polge has completely reinvented N°5. 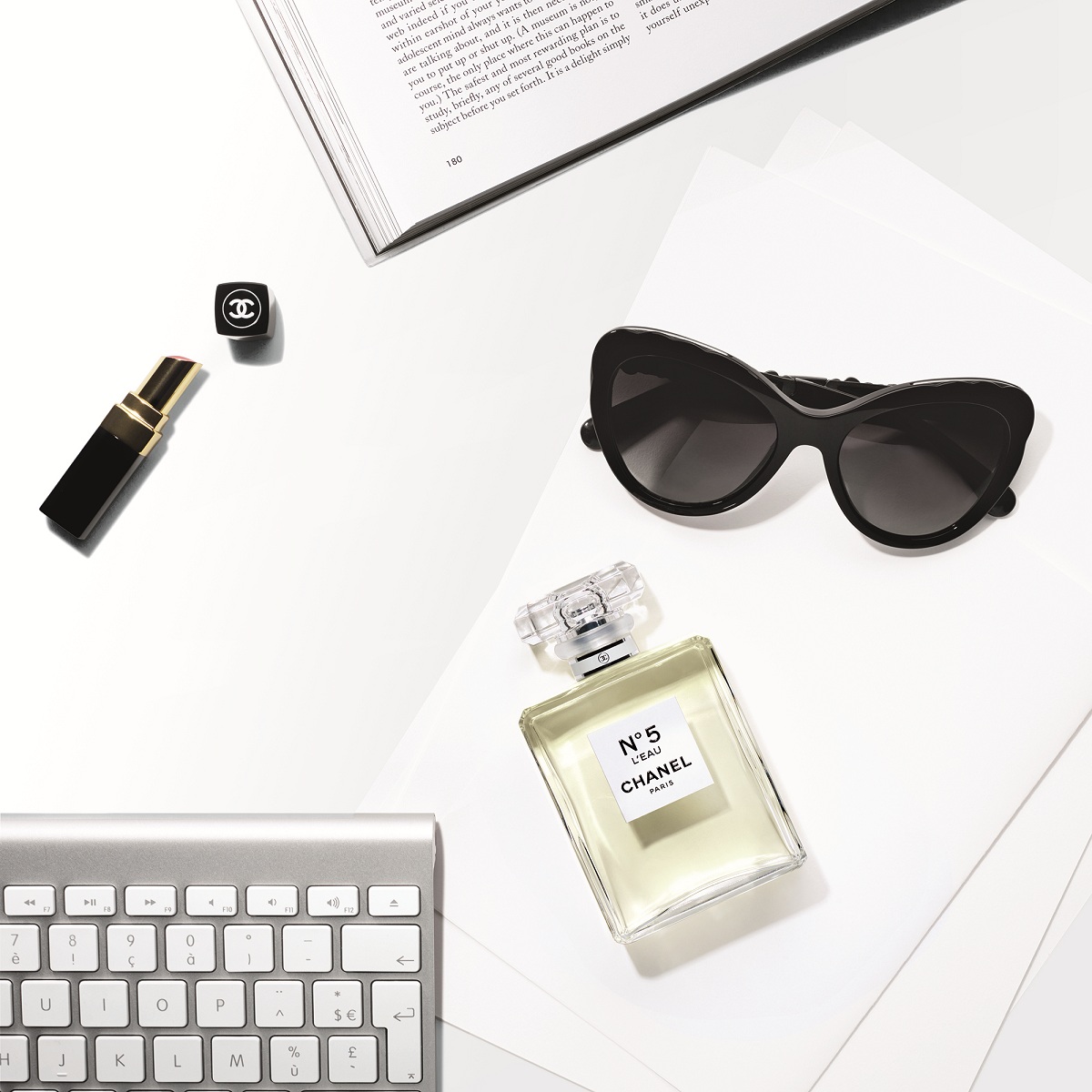 The geometry of petals

From the very first moment, N°5 L’Eau affirms its lightheartedness and transparency. Undoubtedly less abstract than its forebears, the composition radiates citrus like sun-drenched honey. Notes of lemon, mandarin and orange are revealed on the skin and soar skyward with the aldehydes selected by Olivier Polge. And then, like a second wind, you can already hear the rustle of flowers. It sounds like the whisper of trembling tulle. Rose melds with oxygenated jasmine and a new fraction of ylang ylang, more modern than ever. You are plunged into the heart of the bouquet with a delectable dizziness that gives the impression of contact with each petal, its velvety touch, its fleshiness, its delicate lace, its changing shape. And then, behind this floral whirlwind, you can feel a vibration, an unprecedented sense of liveliness. It is the echo of vetiver and cedar, accompanied by soft and cottony musk notes. Never has N°5 been so natural. Never has it been so fresh. 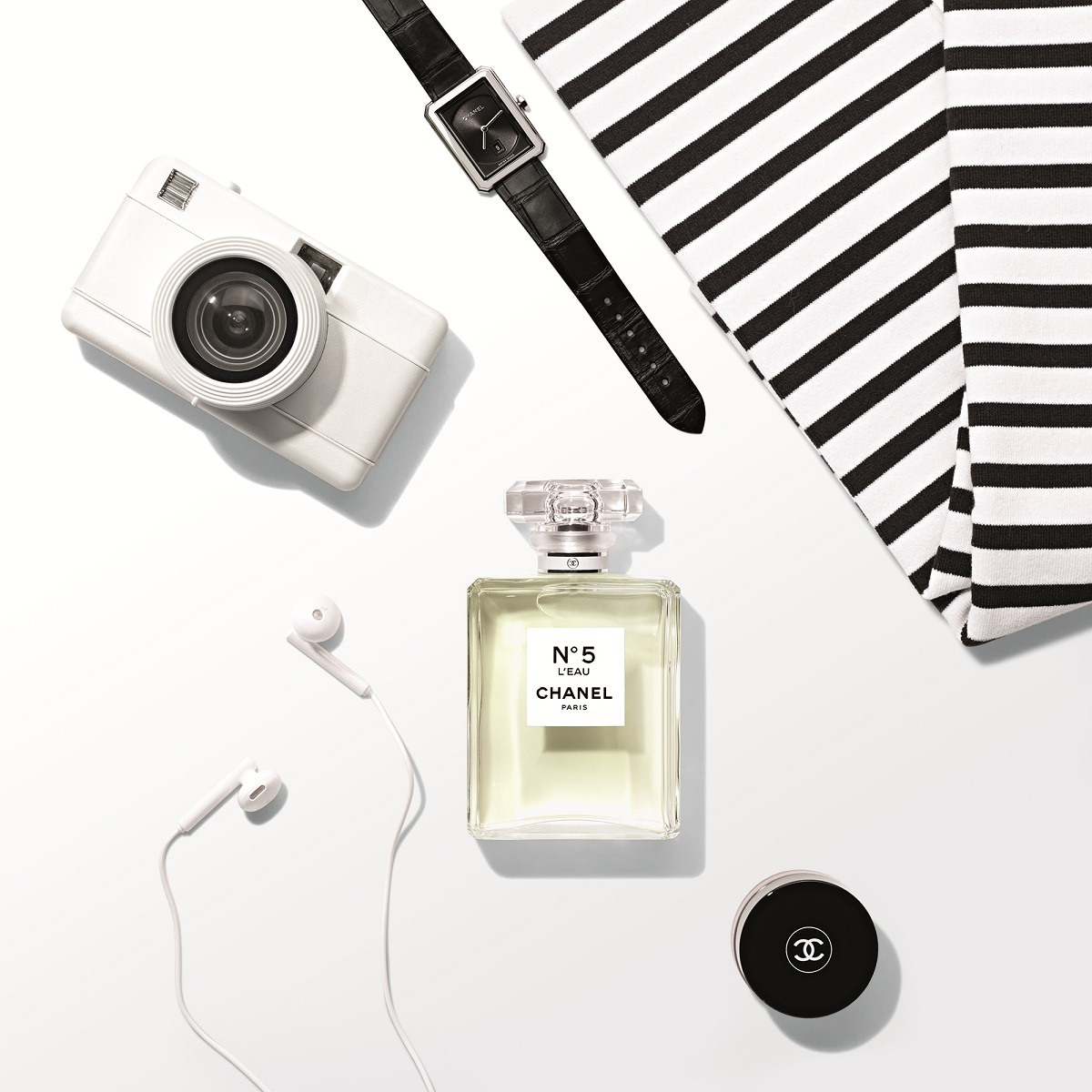 In praise of simplicity

N°5 L’Eau is not a cologne. Nor is it a diluted version of the original fragrance for, at Chanel, each variation is a genuine olfactory creation. N°5 L’Eau is the N°5 of today. A composition under the banner of modernity, with freshness as its leitmotif. L’Eau, for water is essential. L’Eau, in praise of simplicity. L’Eau, the obvious choice. 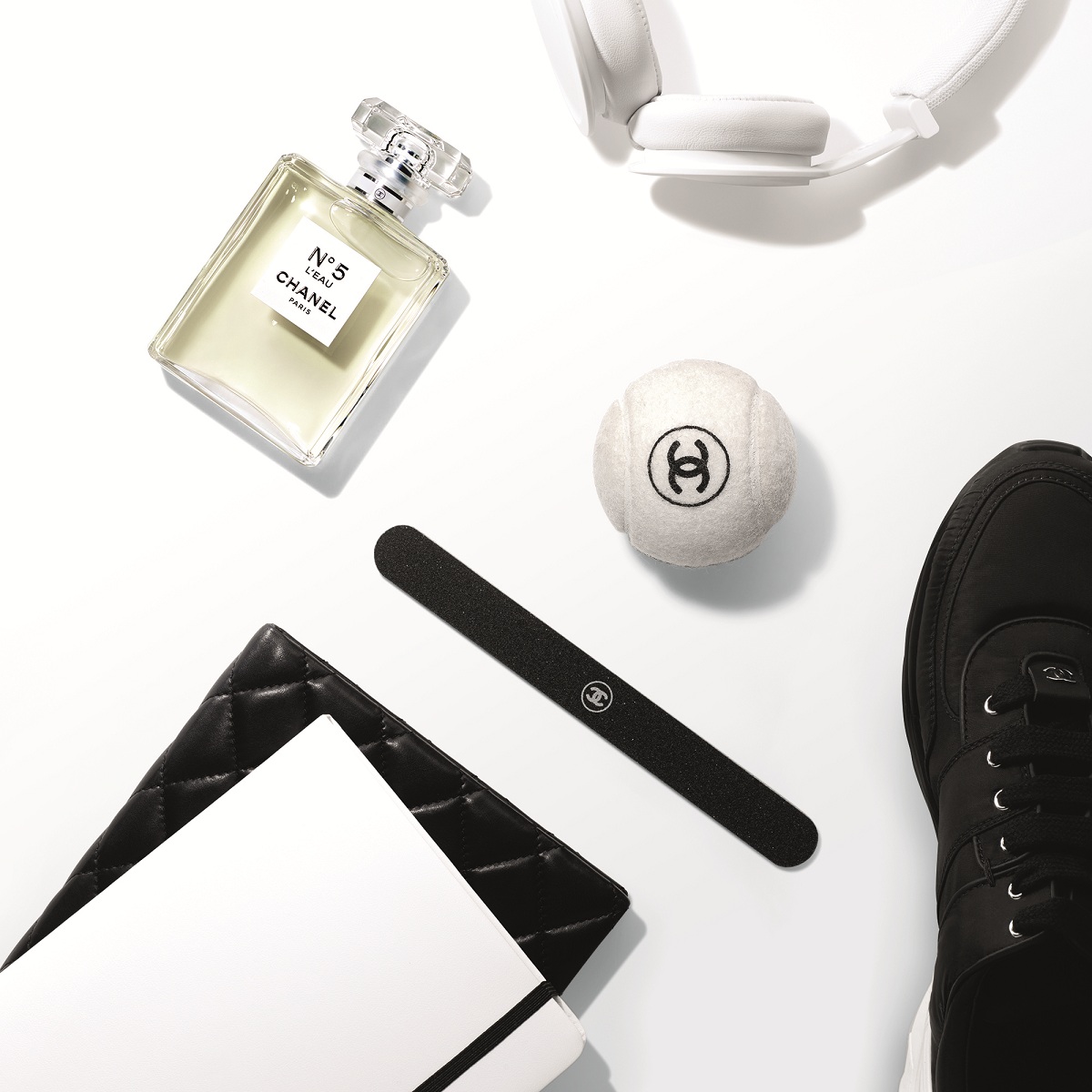 Its iconic silhouette is embossed in the textured cardboard case. A beveled glass shape whose contours alone convey the House of Chanel and modern perfumery as a whole. Here, the bottle has left its mark on the paper in a play of shadow and light that hints at its form. No lines are needed to highlight its presence. A single label indicates its name. Inside, a second box protects the glass bottle like the silk lining of a luxurious coat. Embossed with its legendary number, the white case with black trim echoes the history of Chanel and the timeless power of its graphic style. Lastly, the bottle appears with all the crystal clearness of pure water. No component of the stopper, no mechanism, no essence spoils this limpid impression. Here again, simplicity prevails. This minimalism is not a stylistic device. It is merely a supreme form of elegance that gives free rein to the imagination of the woman who chooses this fragrance for her skin. 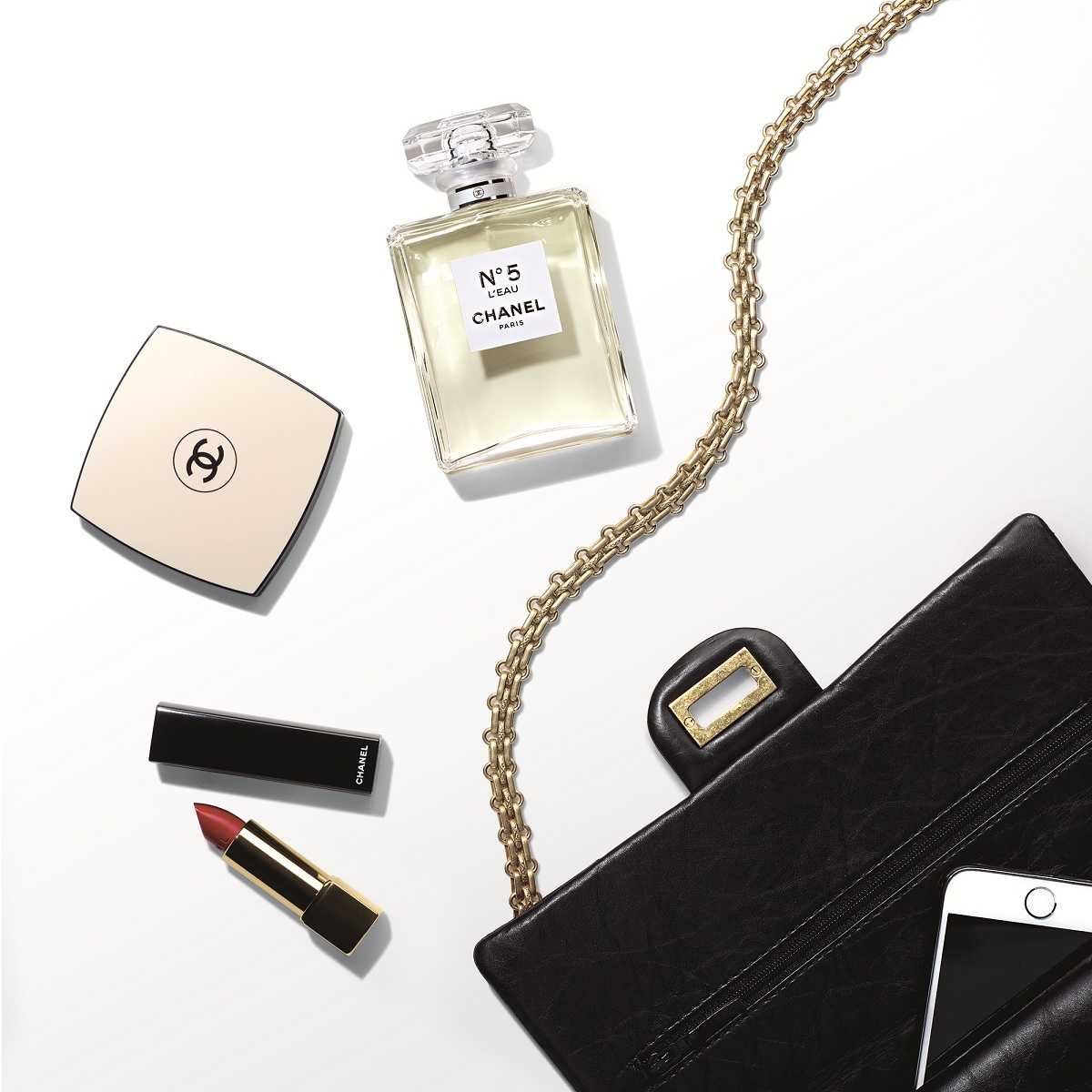