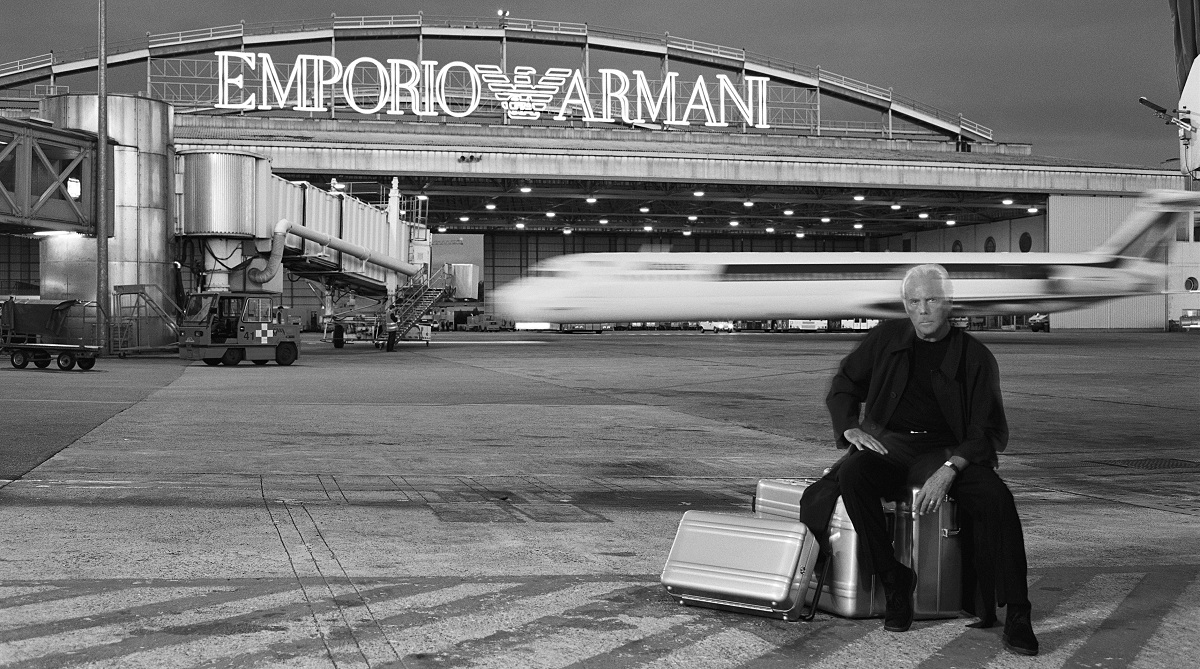 For the first time, the airport will host a fashion show, turning into an unexpected backdrop to the Emporio Armani Spring/Summer 2019 Men’s and Women’s collections. Exceptionally, the two collections will be shown together this season. The fashion show will culminate with the performance of an international pop star.

Giorgio Armani says, ‘Airports are places full of symbolism. They suggest unbounded openness to the world outside. You take off to discover and learn, or come back after experiencing countless adventures. I liked the idea of staging this event in the same hangar which has been labelled with the “Emporio Armani” insignia and its iconic eagle logo since 1996 — an image that welcomes the thousands of travelers who land at Linate Airport or functions as a farewell as they depart from Milan. The airport is the perfect space for Emporio Armani, the brand that embodies a free, adventurous spirit and continually reasserts its essence through a contemporary style.’

The eagle-topped hangar is now part of the collective imagination and one of the many locations linked to Emporio Armani since its inception, representing a “geography” of the brand, such as via Broletto, whose 1984 giant poster site has become part of Milan’s urban iconography, via Durini, where the brand opened its first store in 1981, via Bergognone, site of the Armani/Teatro, home of the brand’s fashion shows, and via Manzoni 31, with its large concept store and Emporio Armani Caffè.

Launched in 1981 as a collection targeting a younger audience, today Emporio Armani is a brand that works as a hub. It matches the way people move in the urban environment, and is inspired by an inclusive, democratic attitude. After the Paris and London show- events of recent seasons, the new destination of Emporio Armani’s journey is Milan, where it will occupy an emblematic space and will be presented through an innovative format.

The brand’s signature democratic spirit will drive the event, which will be attended by a crowd of 2,300, including invited guests, staff and press, as well as a number of members of the public. Tickets for the public will be available via a special contest, held throughout the city of Milan, using a game-like format. The first one hundred randomly selected names, among holders of “passport” – those taking part in the contest will have to collect a series of stamps for in a special “passport” – will be the lucky winners who, accompanied by a guest, will be admitted to the soirée.

The event has been anticipated with a billboard campaign and the customization of the Linate Airport, as well as advertised on tram and buses throughout Milan. A special Emporio Armani Boarding capsule collection has been created for the occasion: sweatshirts, T-shirts and accessories inspired by the event-theme. The capsule will go on sale on 13th September in Milan and in the main Emporio Armani flagship stores worldwide later on, as well as on armani.com.

All “behind the scenes” activities associated with #EABoarding and live streaming of the show will be available for viewing on @emporioarmani through the main social networks.