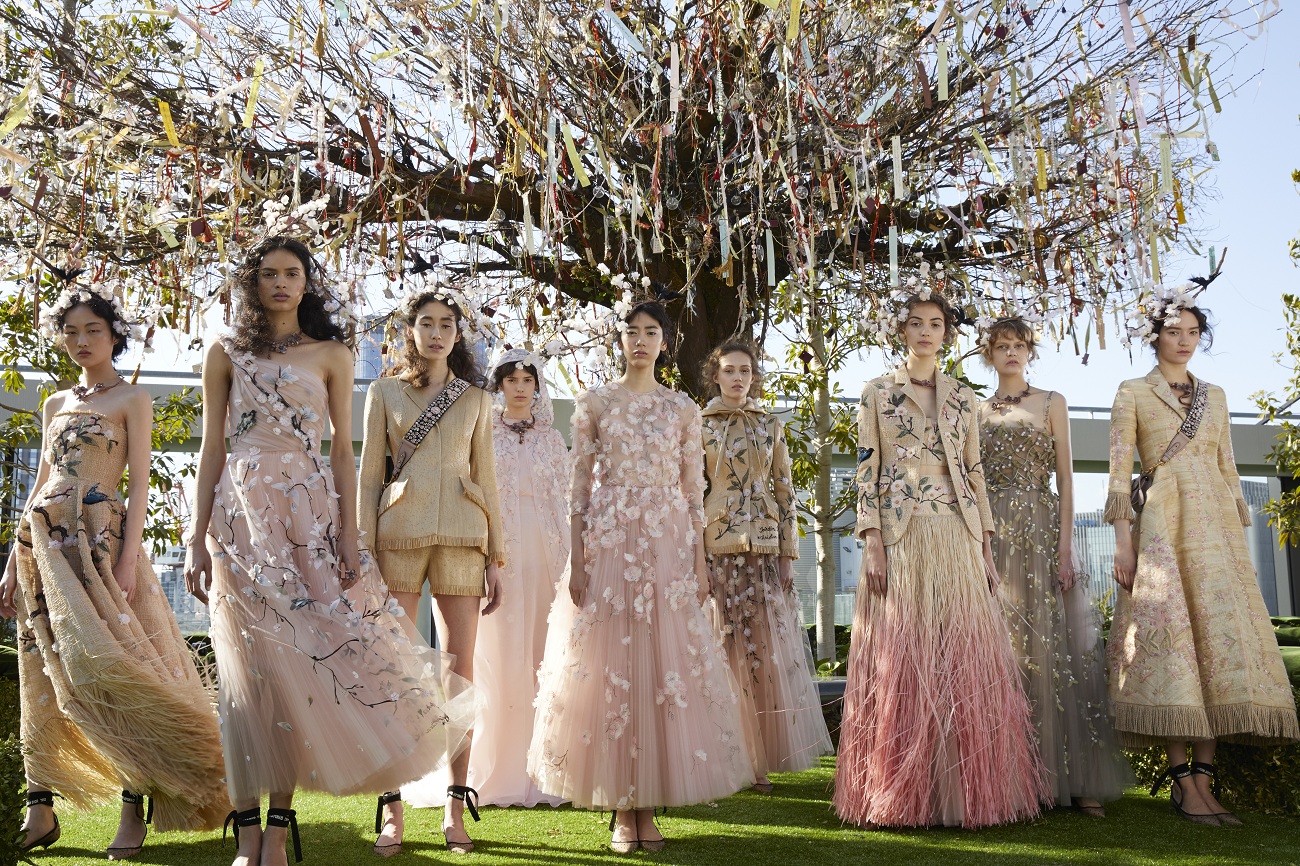 The labyrinth; irregular, almost impenetrable, like a secret garden. This is the image that inspired Maria Grazia Chiuri, Artistic Director of the women’s collections for the house of Dior, for her first Haute Couture season. 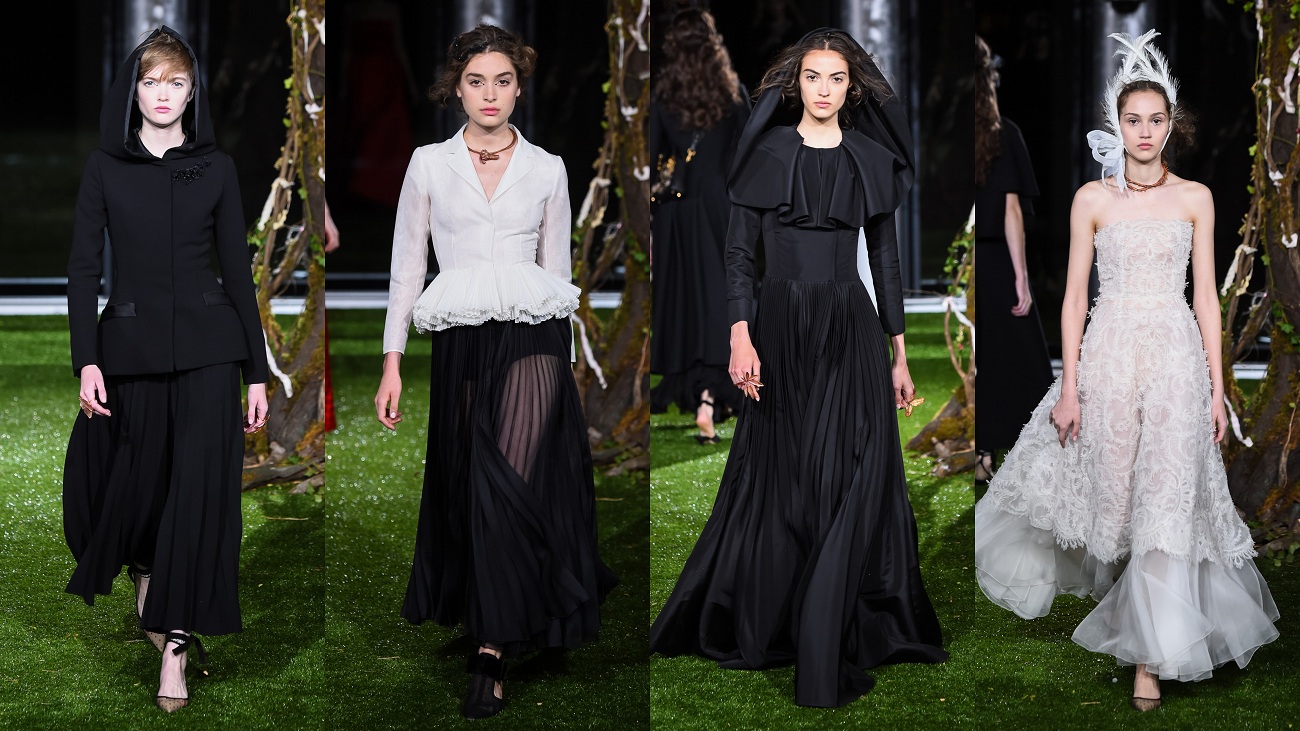 Fascinated by the myriad of interpretations to which this archetypal form has given rise over the ages, she perceived her adventure into the heart of the Dior world as being akin to entering a labyrinth, the way sprinkled with the flowers, plants and allegorical images that form part of the iconography of these places but which, at the same time, reference the imagination of Christian Dior who wrote of them: “After women, flowers are the most divine of creations. They are so delicate and charming, but they must be used carefully.” 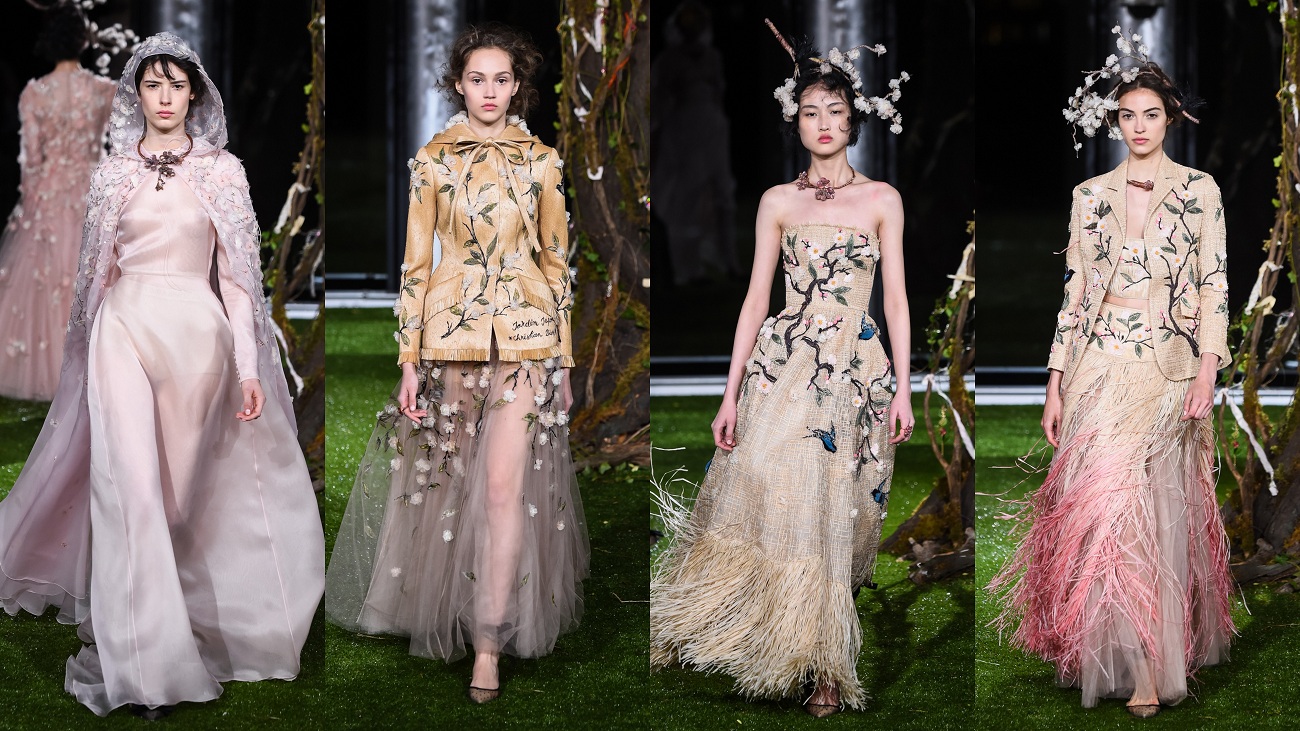 The result is evening dresses in changeant and powdery colors (mauve, blue, pink, gray) which evoke the passing of the seasons and of life itself, and whose layers of tulle trap exquisite flowers, like those we preserve in our most prized herbariums. Claude Lalanne, for his part, imagined that the flowers, brambles, and butterflies of costume jewelry landed on bodies ready to spring to life. Memory is the driving force shaping a new story that rewrites the House’s lexicon, translating it into shapes and cuts that are the imprint of the silhouettes, dreams and desires of today’s women. Lace, for example, is cut out and remounted on organza, and pleated tulles in fairy tale hues are layered in compositions that are both ethereal and majestic. Stephen Jones’ hats and masks bring an aspect of gothic phantasmagoric with a punk edge. 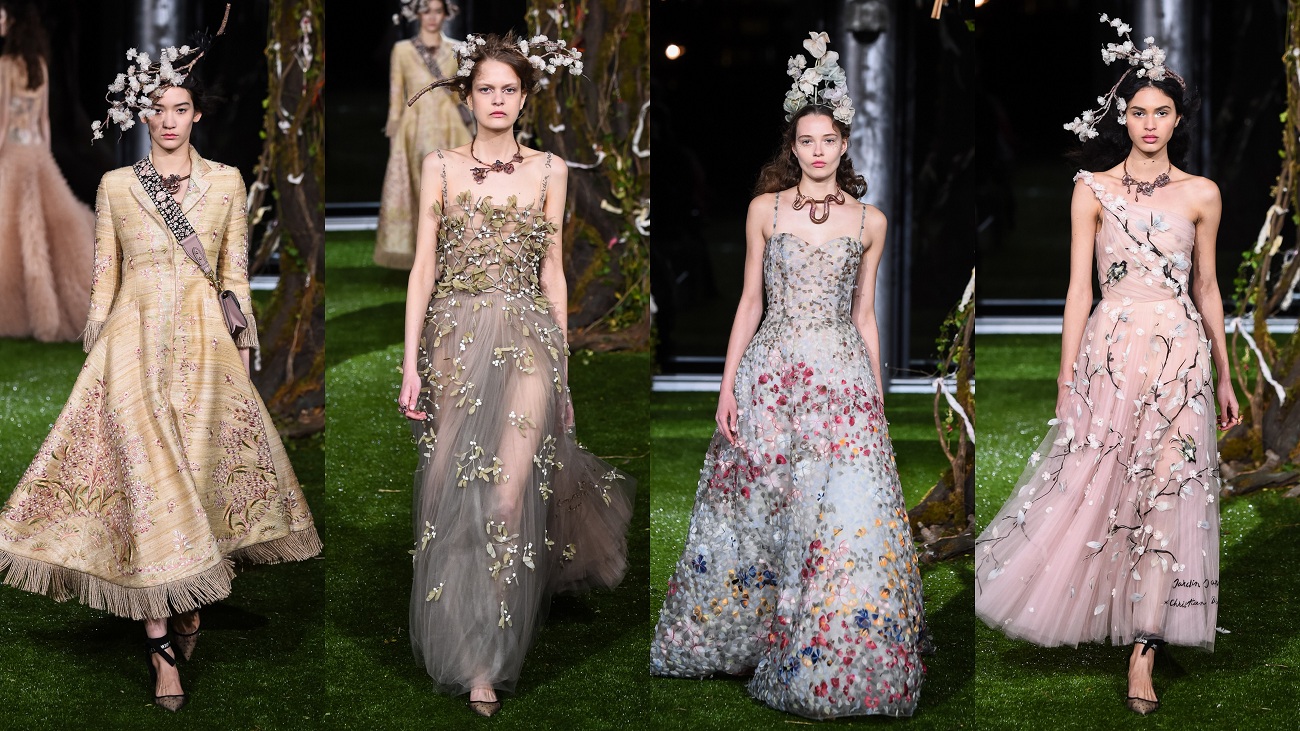 Maria Grazia Chiuri embraces the art of divination, transforming it to embellish her creations: embroidered stars stand out against gold-colored tulle, tarot symbols are hand-painted on the white panels of long dresses. This white can be found inside a black coat, and adds a further element to the feminine tuxedo. Reborn in a series of fresh interpretations, this typically masculine evening outfit becomes the defining piece of a contemporary take on femininity. The Bar jacket is deconstructed and reinvented, even as a cape. Pleated, roomy culottes have satin on the side, and the Domino coat an imposing black velvet hood. This voyage is guided by a desire for beauty, where losing oneself is a necessary step to challenging oneself and evolving. And so, for the finale, Maria Grazia Chiuri imagined a splendid ball straight out of a fairy tale. Liberating and unforgettable. 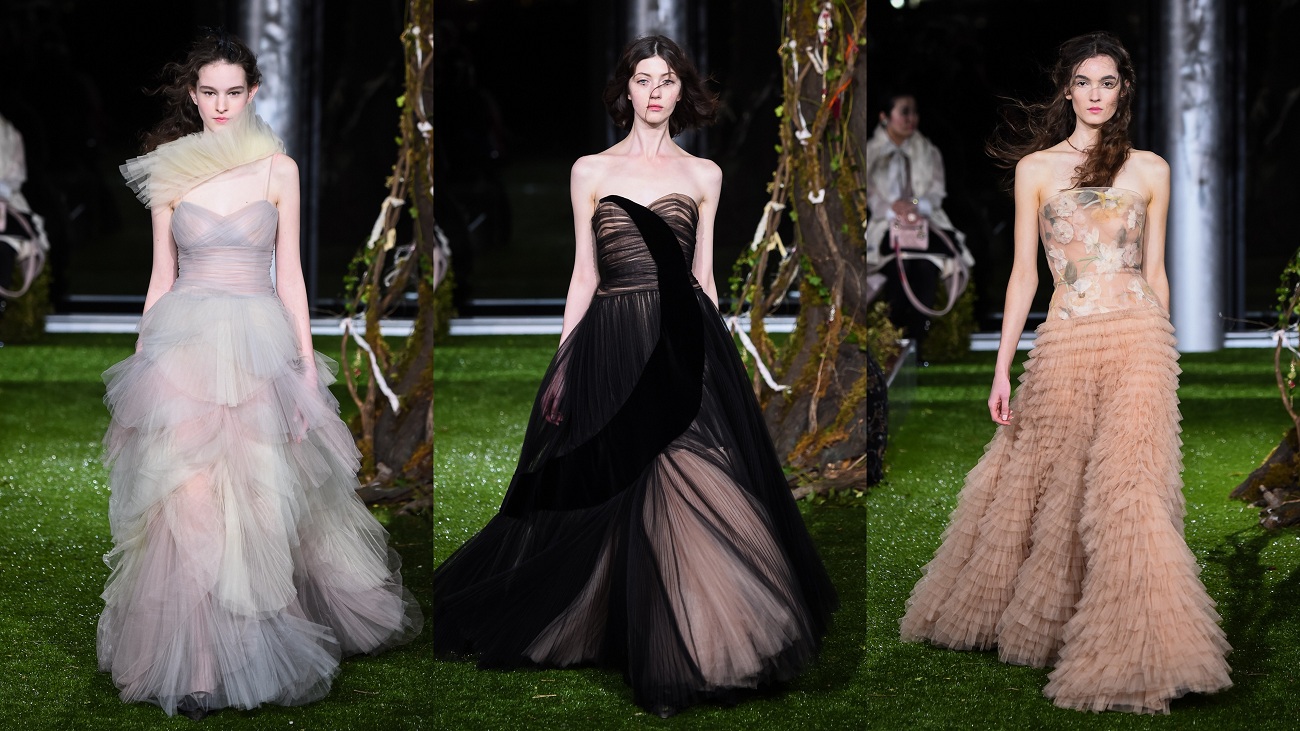 Specially for the Tokyo live show, Maria Grazia Chiuri has designed a number of additional and entirely new creations, in which the tangible spirit of Christian Dior is revisited in a contemporary take. Maria Grazia Chiuri has in effect drawn her inspiration from a design in which Monsieur Dior, in 1953, expressed his fondness for the Land of the Rising Sun and its traditions: the Jardin japonais dress, with its cherry blossom motif, a reference to the festival of hanami which celebrates the arrival of spring. Fluid dresses that hint at the curves beneath, jackets, a coat, and a long hooded cape are decorated with delicate embroidered flowers, paired with bird motifs, expressing the meeting of the haute couture savoir-faire of the ateliers at 30 Avenue Montaigne with the culture of Japan. 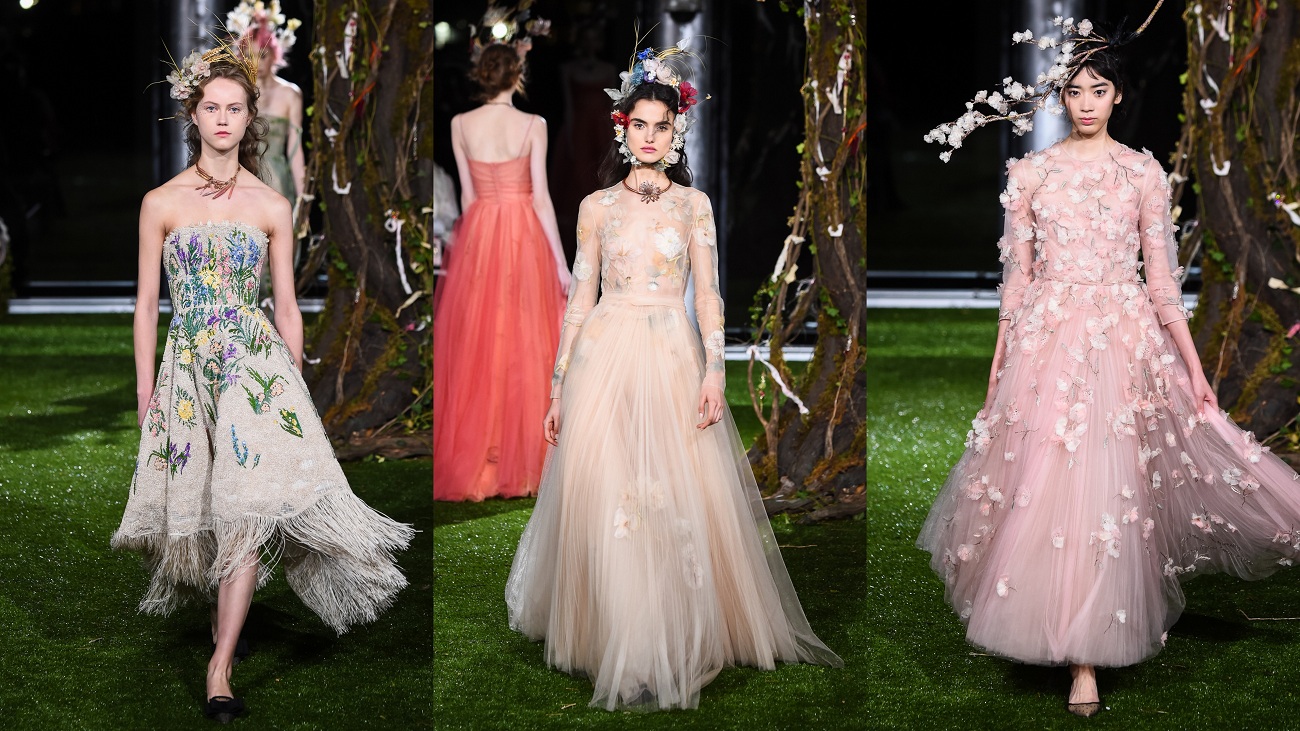