Home » FASHION » Chaz Guest: I want to seek the soul of things, and put the DNA of it on canvas 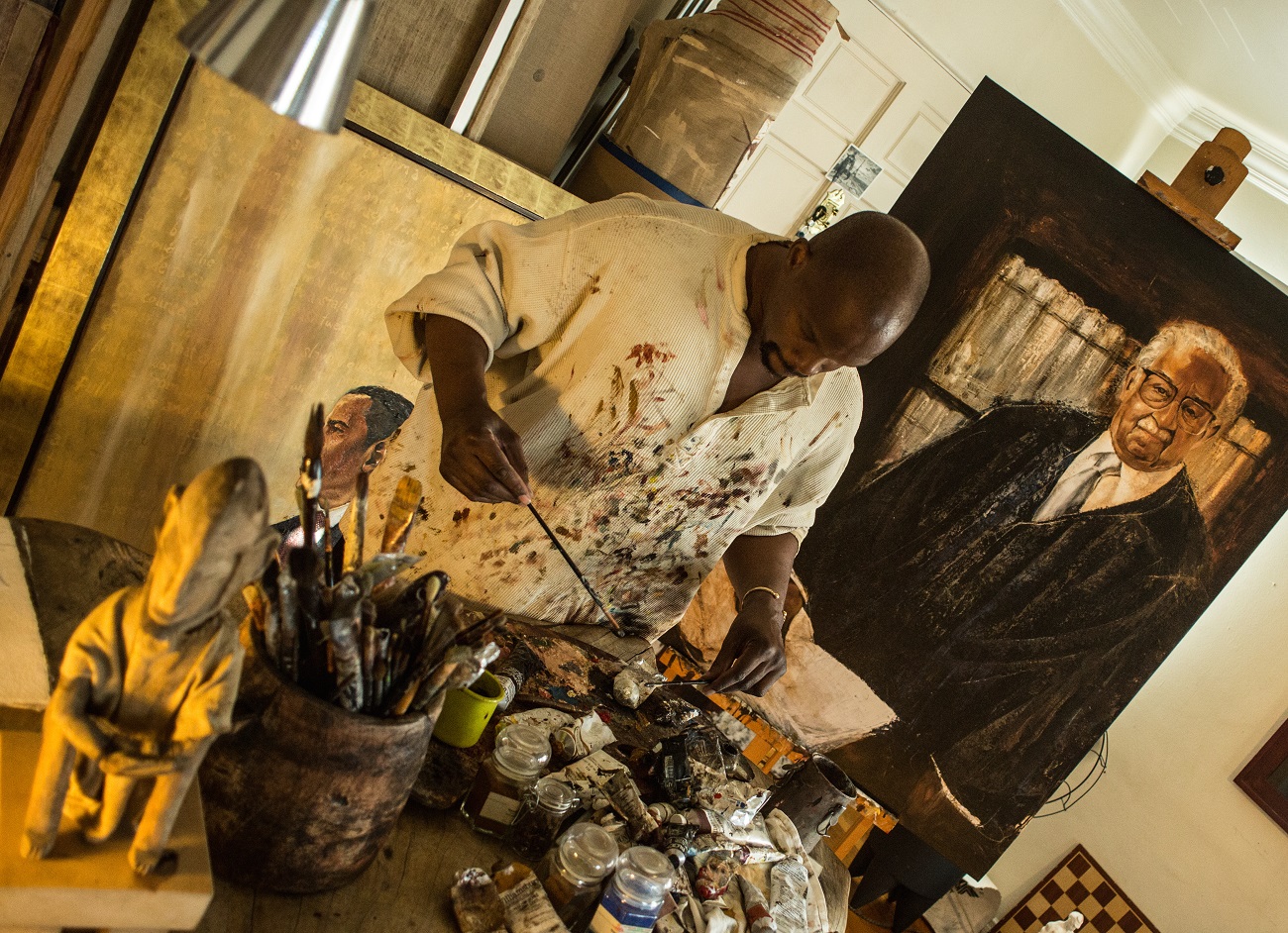 Discovered during his Parisian days by renowned fashion designer Christian Lacroix, New York-born painter and sculptor Chaz Guest was simply destined to become an important figure in the modern American art. Guest worked as a fashion illustrator for French Joyce Magazine, where he left his indelible stamp on the world of haute couture fashion working for Dior, Lacroix, and Yves St. Laurent. His enormous talent and excellent technique help him to produce deeply moving artworks, with such kinetic power that it literally unleashes an overwhelming maelstrom of emotions onto canvas. Guest‘s work, cataloged as figurative expressionism, is rich in color and movement, and will strike your soul to the very depths. He has painted numerous celebrities from all over the world, including Vanessa Williams, Stevie Wonder, The Gambian President, U.S. President Barack Obama, and countless others. Chaz Guest has exhibited in many prestigious galleries in Europe, Asia and the United States. His work can be seen in Robert De Niro’s film “The Score”, 2001 and soon will be featured in the TV show “Empire”. Now, he is creating Buffalo Warrior series of paintings for the new graphic novel, that will be adapted for his first big-screen adventure. Guest shared with us an inside look on his art, passion and biggest influences.

What originally made you want to become an artist?

There are a number of factors, however the first three comes to my mind… I thought long and hard about what was in my soul… my comfort zone, how do I want to die. As a child, I would color until I had huge blisters on my fingers. I wanted to hand make my own life, so thinking of my childhood, painting came to the surface and I wanted to die painting.

How would you describe your artistic approach?

My approach? I want to seek the soul of things, and put the DNA of it on canvas or move the clay to say something when I sculpt, to seek truth. 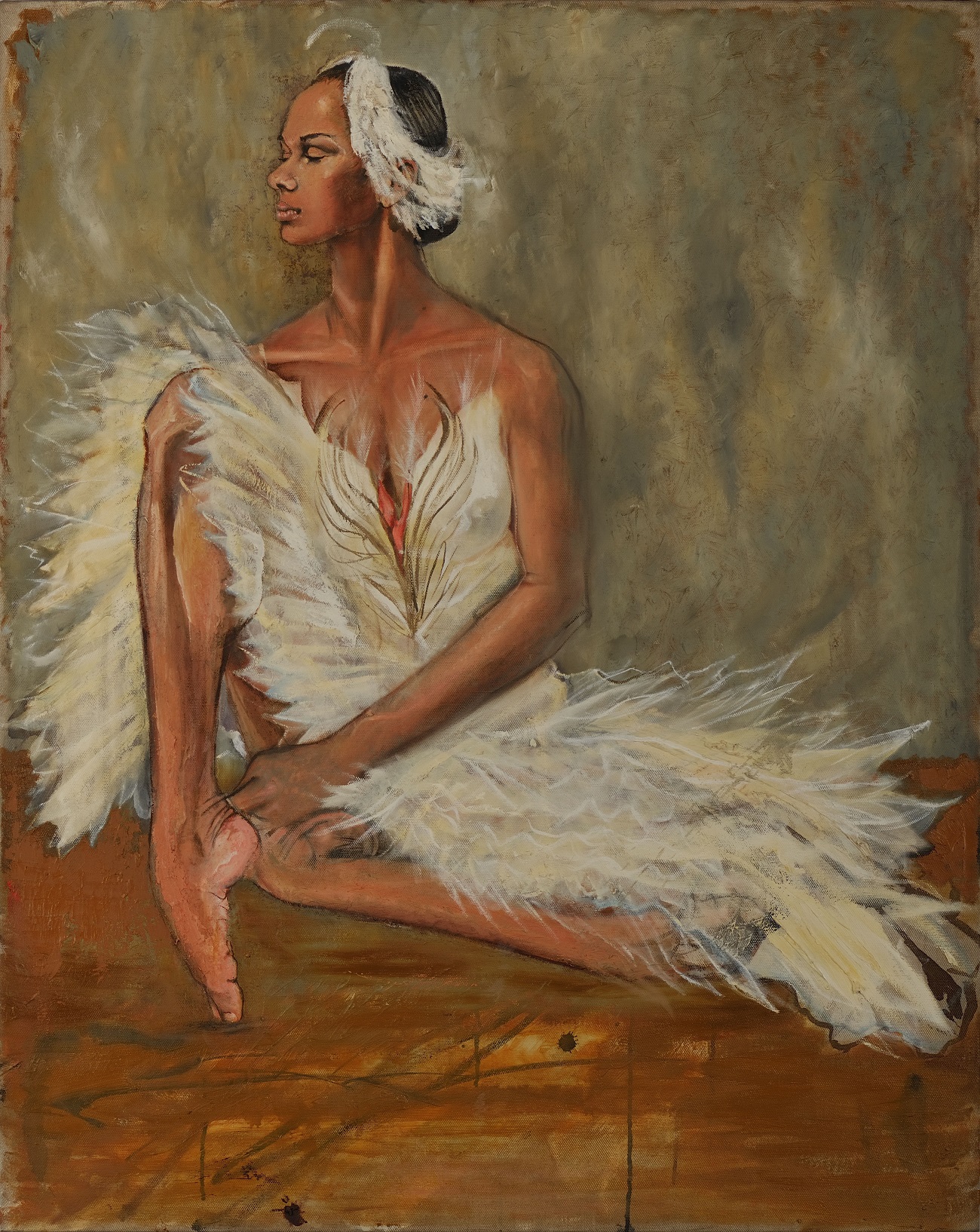 What techniques do you enjoy working the most? Tell us more about your creative process…

You were in Paris in mid-eighties, working as a fashion illustrator for Joyce Magazine, when you met legendary Christian Lacroix. How did this encounter impacted your career as a painter? Was there any specific advises from the iconic fashion designer?

Mr. Lacroix was like an usher. Really amazing artist, wow!! So he noticed something more in my illustrations and just said: “You should paint”. But painting was already in my cards…that was already my story. He is so amazing, really.

Your works grace the walls of some of the world’s most popular and powerful people, including Denzel Washington, Oprah Winfrey and President Obama. Have you ever dreamed of such a success? What is harder for an artist to deal with, rejection or recognition?

I don’t deal with anything… I just paint. I could care less about who’s buying my paintings. Just as long as there is respect for the work. No one can reject someone who does not expect anything…. 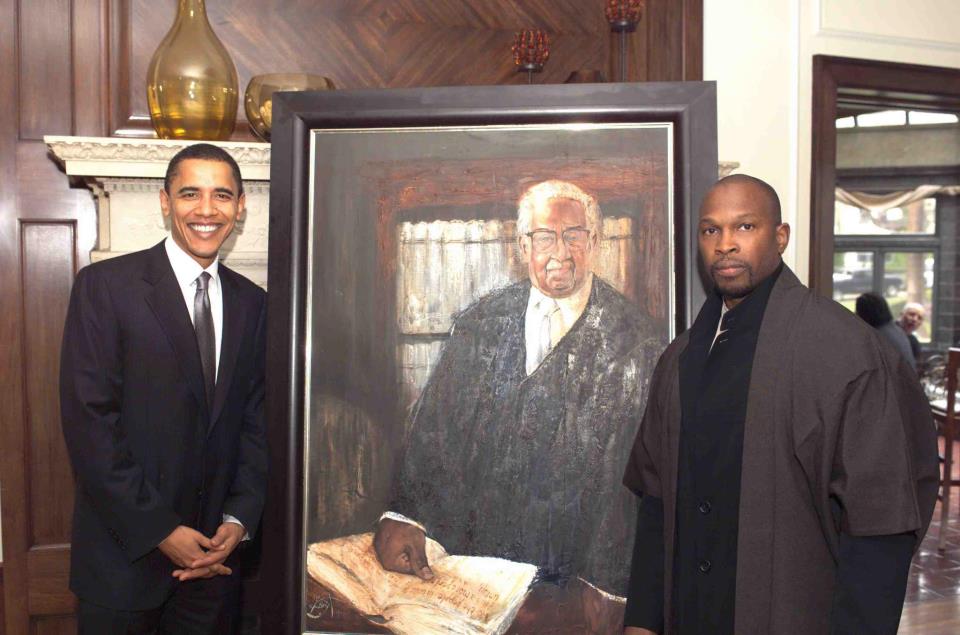 Artist Chaz Guest presenting his painting of Thurgood Marshall to US President Barack Obama at the home of Mattie and Michael Lawson. This painting currently hanging in the Oval Office in Washington DC on loan from the DuSable Museum of African-American History in Chicago. 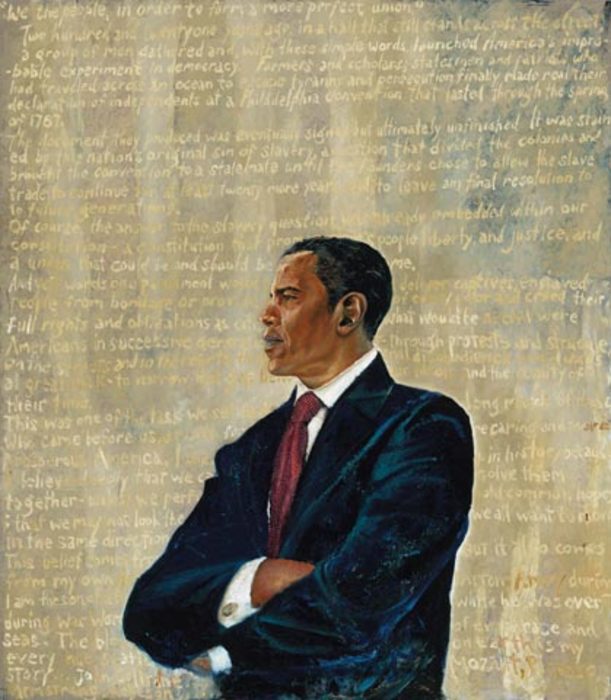 What motivates you to continue to create?

I am in love with life… It motivates me, weather it’s music, a person, an event. When I wake up in the morning, I am motivated to make my mark in this life. I’m blessed to paint. Also right now I am working very hard on my Buffalo Warrior series of paintings. Each painting will be reproduced as a page of the limited edition graphic novel, later to be made into a silver screen superhero movie. I am so motivated to bring him to life and also in a contemporary Art kind of way. 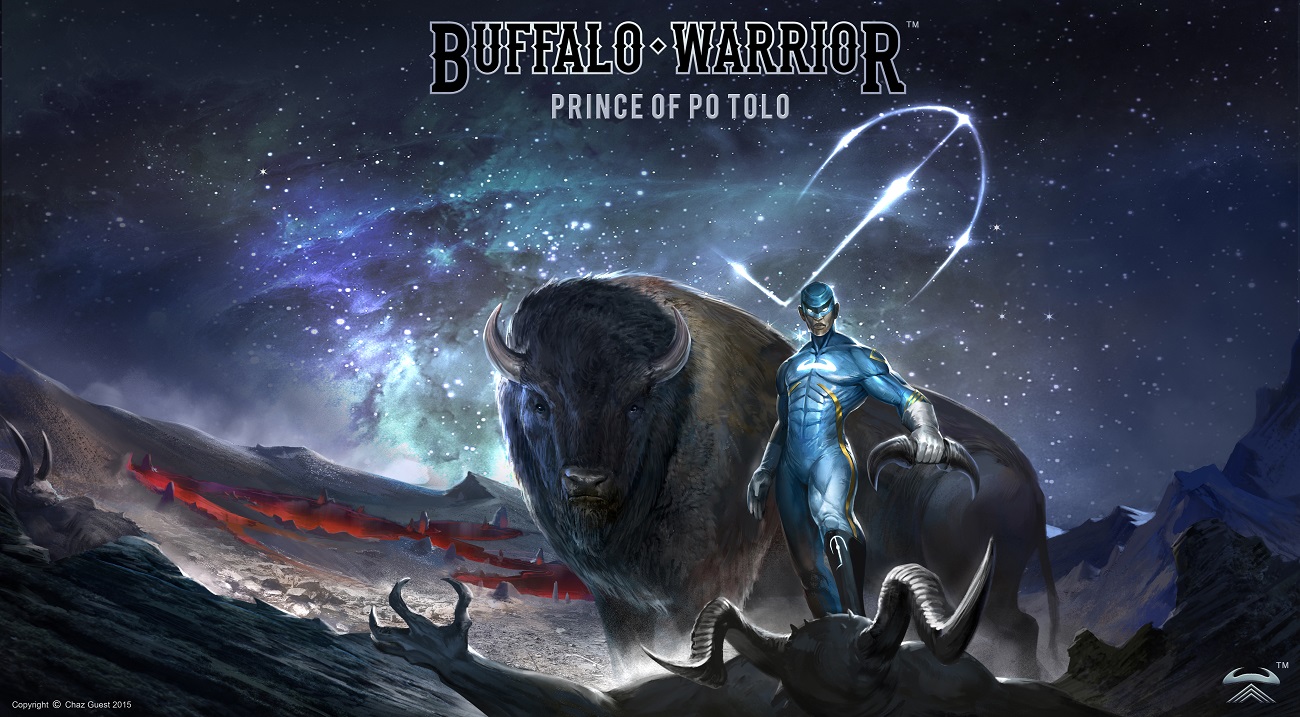 Who has been the biggest influence on your work?

The biggest influence were the great artists of the past, like Romare Bearden, Dalí, Balthus, Picasso, Emilio Cruz; music – Miles, Monk, Coltrane, Mozart; food, dancers, religions… Influence is all around us.

What is your favorite work that you’ve produced so far and why?

I have not produced a favorite piece. Besides my sons. (laughs)

What kind of message do you want to send when people view your artwork?

I want people to think, feel, and learn. There is always something to investigate. 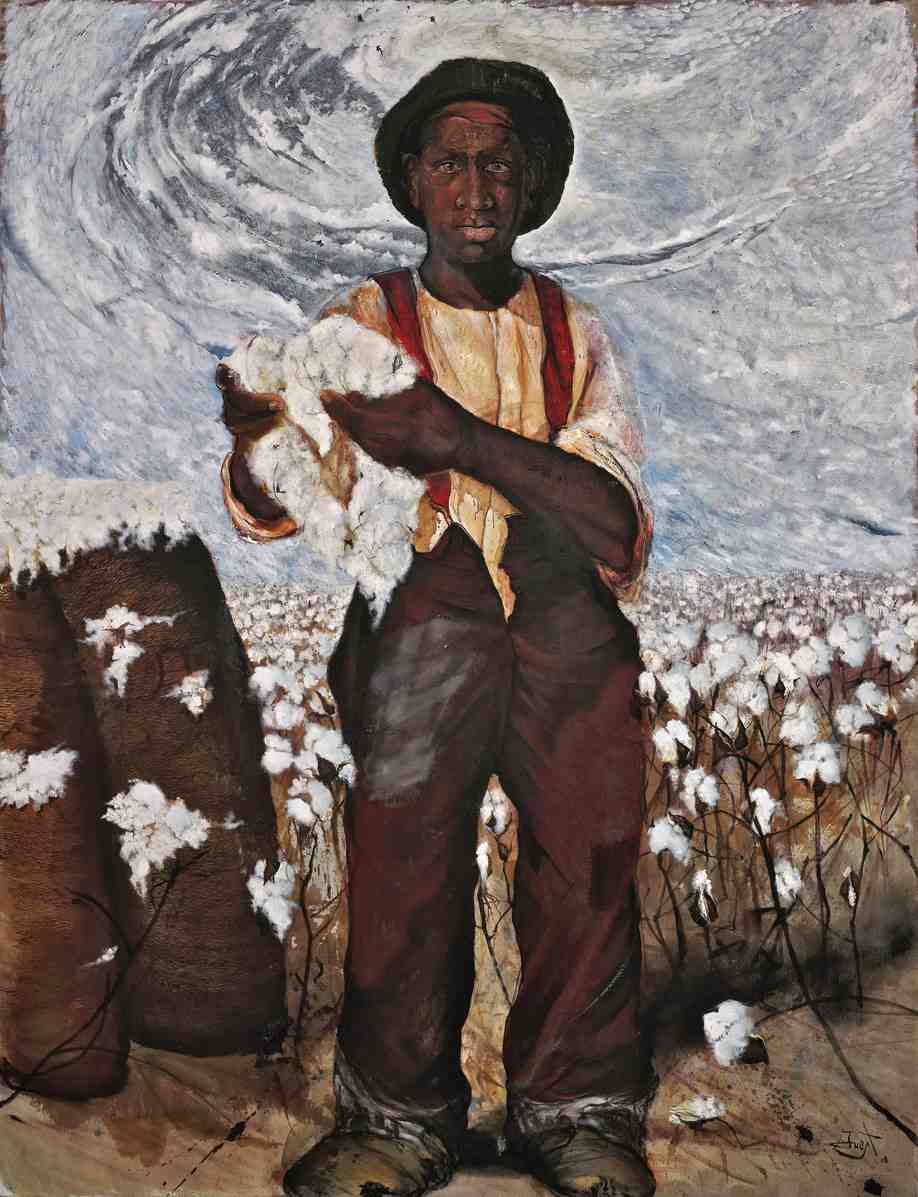 How your artistic approach changed over the years?

We become more wise, I hope. More aware. I use what I learn.

Has anything recently challenged your views on art?

Yes. The passing of my lovely mother and grandmother. They have now made me stronger in our new relationship. I am unstoppable.

What are you currently fascinated by and how is it feeding into your work?

I’m fascinated that I have been making a living as a painter for over 25 years, without having a major representation. It’s been very close, but not a home run. So I travel the world and I fascinate myself…(laughs)

You were named the Goodwill Ambassador to the Republic of Gambia in 2011. Can you tell us more about it?

I was moved by the story of “Roots” by Alex Haley. One day I was invited to The Gambia by the President because of a collection of paintings that I produced called “The Cotton series”. While on a tour, I was told that this Island was named Fort James Island. I simply had to change that European name to an African name. The President there allowed me to change it to Kunta Kinteh Island. Today, it is called Kunta Kinteh Island and I became a Goodwill Ambassador that same year, and have been invited back five times so far. Alex Haley would be proud. I even had Ben Vereen, the King of Broadway, come with me last year, you know Chicken George from “Roots”!

What are you passionate about besides your work?

I have a passion to help humans realize our greatness. Our reasons for being allowed to grace this planet. I know that I won’t change a thing…. but it’s fun trying. We can do much better. I’m also passionate about representing my culture as an American person. My culture is layered, deep and beautiful, but sadly misrepresented most of the time.

What was the best advice given to you as an artist?

Trust your heart, and just do the damn thing!