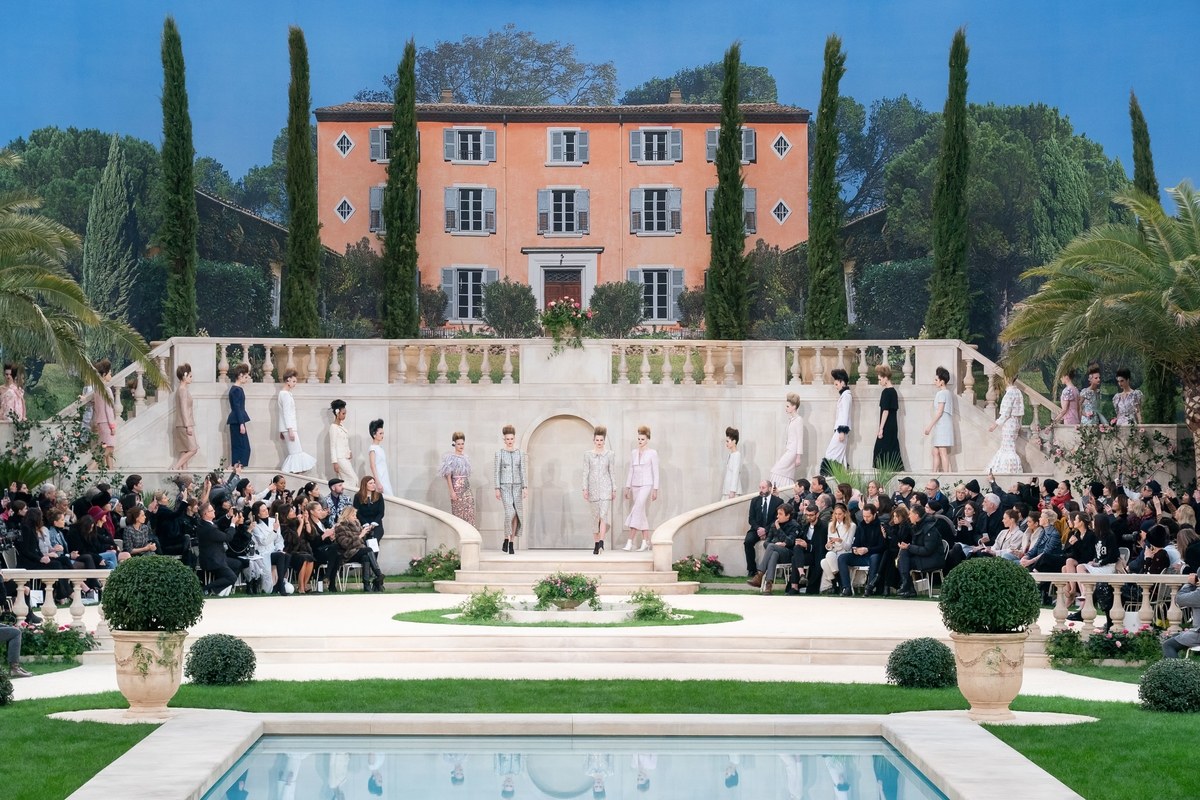 Chanel Spring 2019 Haute Couture collection bears more than superficial resemblance to Karl Lagerfeld’s works for the house during the 1980s. From boxy costumes to romantic low-waisted taffeta dresses and thick ruffles of lace with hoop skirts below them, it is hard not to notice that Lagerfeld‘s couture has never been so playful and funny. And, while it is said in a statement that Chanel’s emblematic Creative Director was inspired by the 18th century, it is the glamor of the ’80s that triumphantly prevailed over the numerous Rococo references.

Another curiosity happened at the end of the show: this is the first time in Karl Lagerfeld’s 37 years-long tenure at Chanel that he wasn’t present at the runway, because of the exhaustion. Instead, Virginie Viard, the director of Chanel studios and Lagerfeld’s rumored replacement, took a bow in front of the content audience, with the immortal tones of Mina’s evergreen hit “Parole, Parole“ as a musical backdrop.

Here are the key looks: 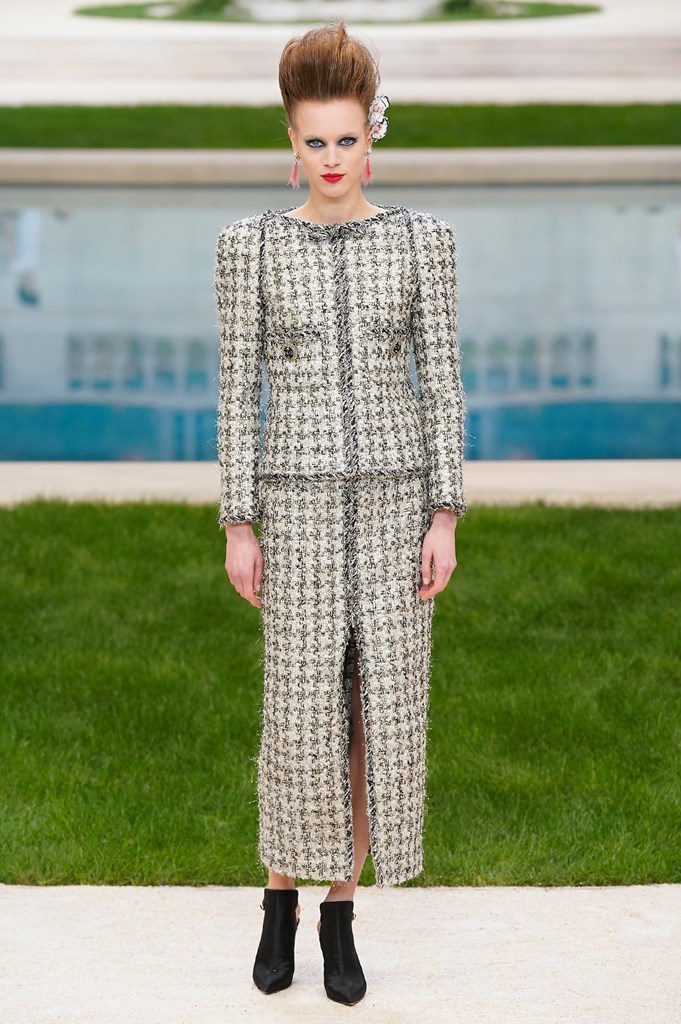 LOOK 1 – Described as “the new Chanel” by Karl Lagerfeld, the House’s Haute Couture tweed suit is pared down to the extreme. It appears crosshatched by braiding that dissolves into the fabric, embroidered into tweed and woven with iridescent thread. The boat neck falls, as ever, in a straight line on strong shoulders, but now with a slightly curved line that gives a very slender silhouette a rounded touch; an allusion to the geometric spirit of French gardens. 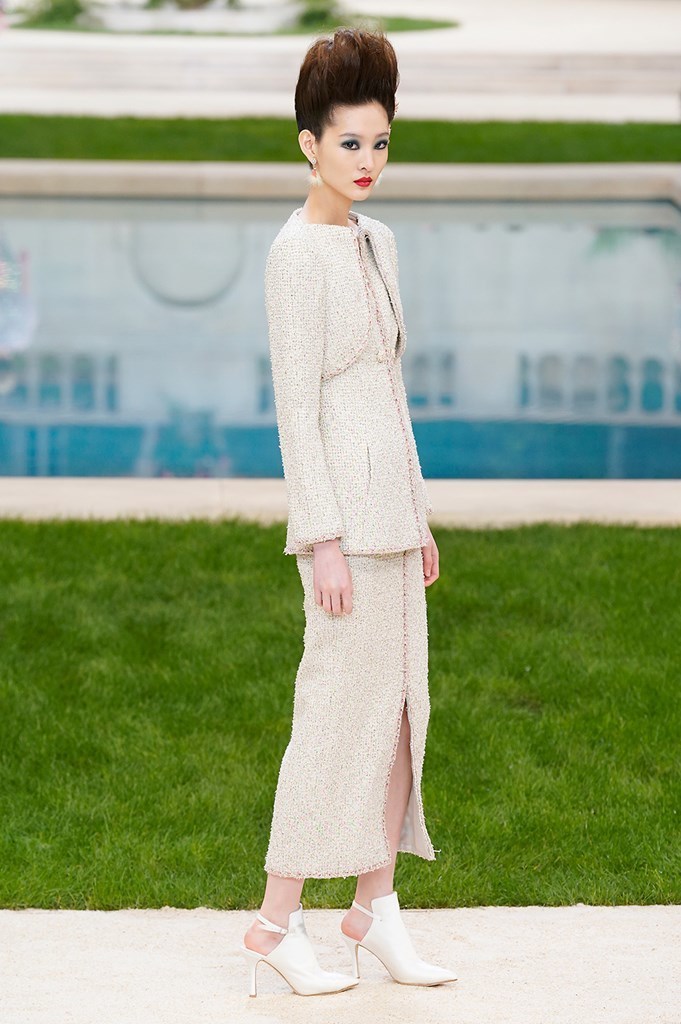 LOOK 6 – The Spring-Summer 2019 Haute Couture tweed suit is as long and slender as a tunic, highlighting a new construction detail, creating the illusion of a bolero. 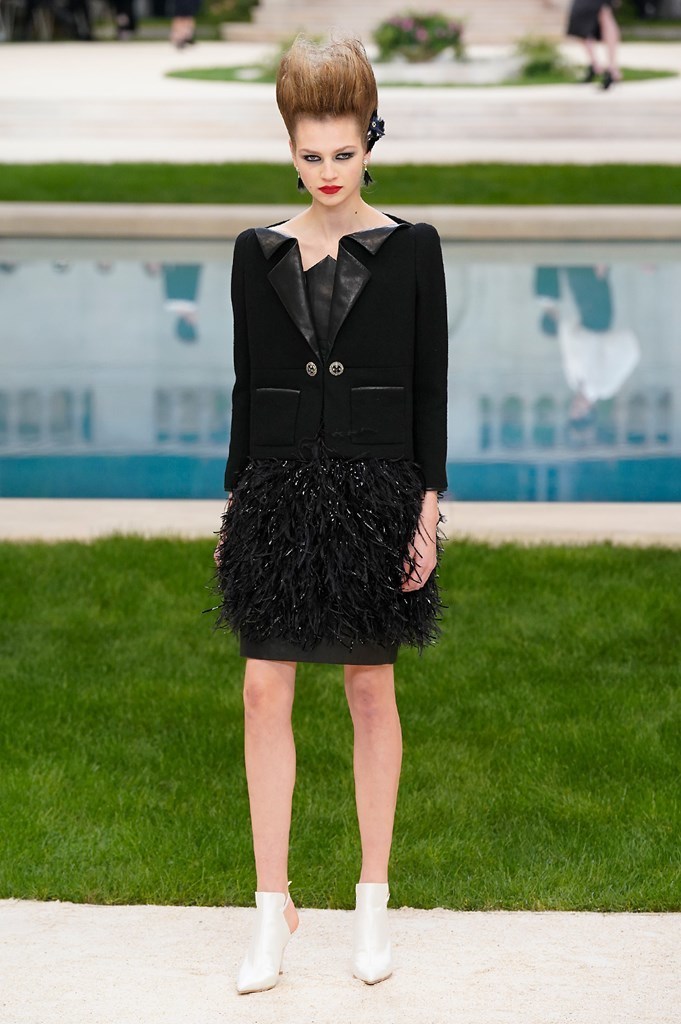 LOOK 30 – Entirely black and playing with volumes, this look presents a geometric jacket with a folded leather collar, paired with a feather-embroidered skirt. With its clean, sharp lines, this squared jacket reveals all the precision and know-how of Chanel’s tailoring ateliers, which specialize in creating structured pieces. 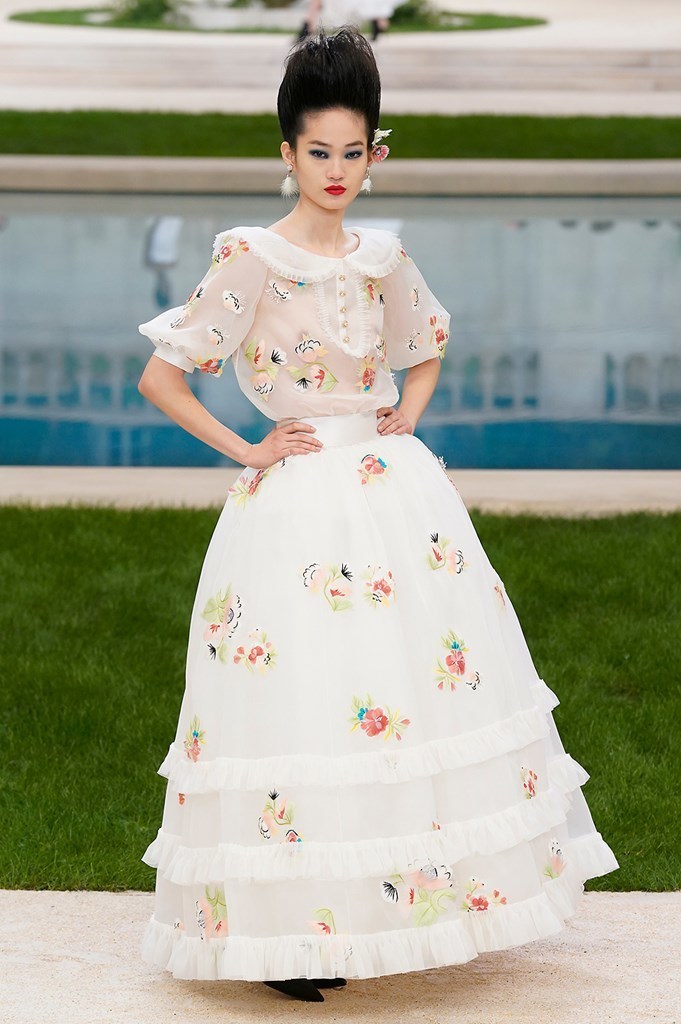 LOOK 37 – The know-how of the Haute Couture ateliers at 31 rue Cambon in Paris comes together in this white organza dress sprinkled with floral bouquets embroidered from multicolored feathers that are hand-painted before being assembled. The nipped-waist silhouette opens into a voluminous, ethereal corolla skirt amplified by tulle underskirts created from several dozen meters of fabric. 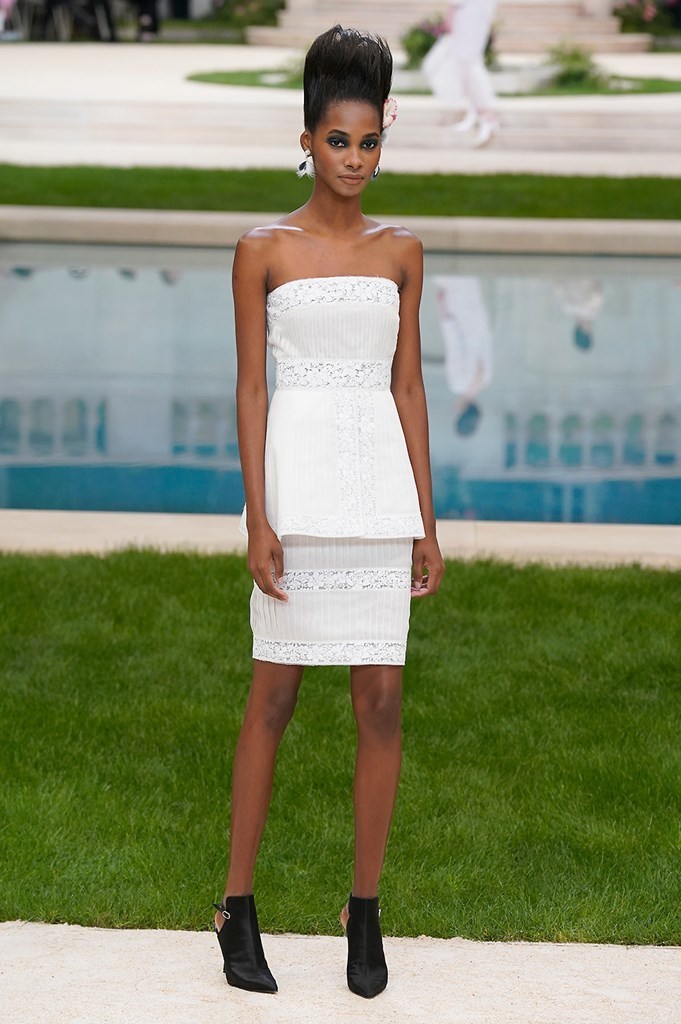 LOOK 41 – In tune with the lightness and style of the 18th century, the main source of inspiration behind the new Haute Couture collection, a lingerie dress in white pleated chiffon is interpreted in ennobled lace. 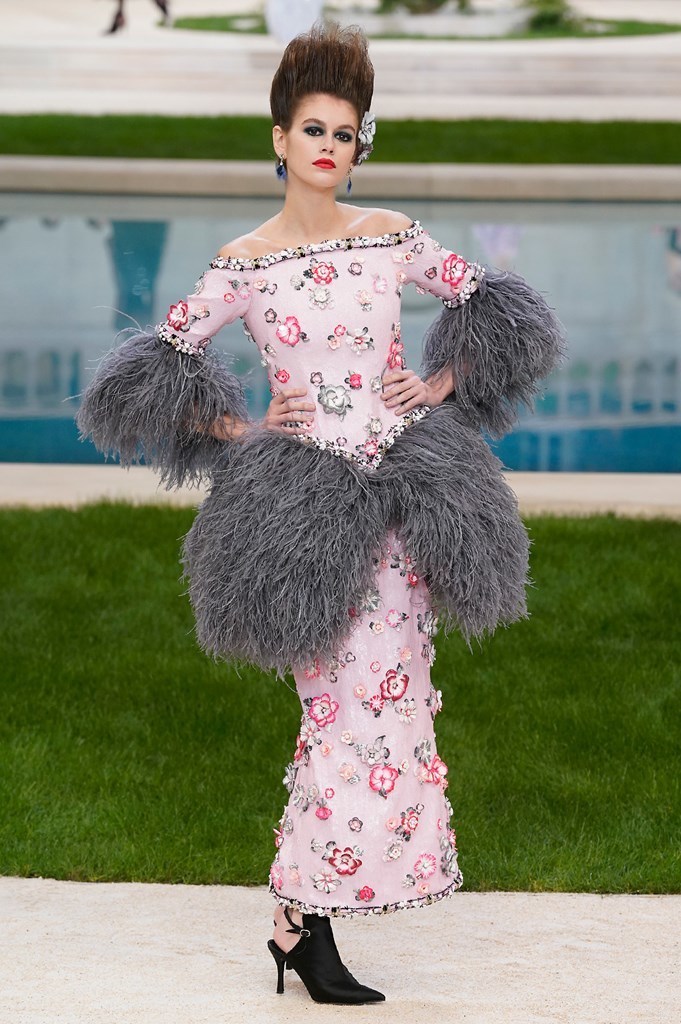 LOOK 53 – A feminine wide boat neckline reveals the shoulders and the back while feathers add additional texture and volume on the entirely sequinned dress with hand-painted ceramic flowers worn by model Kaia Gerber. 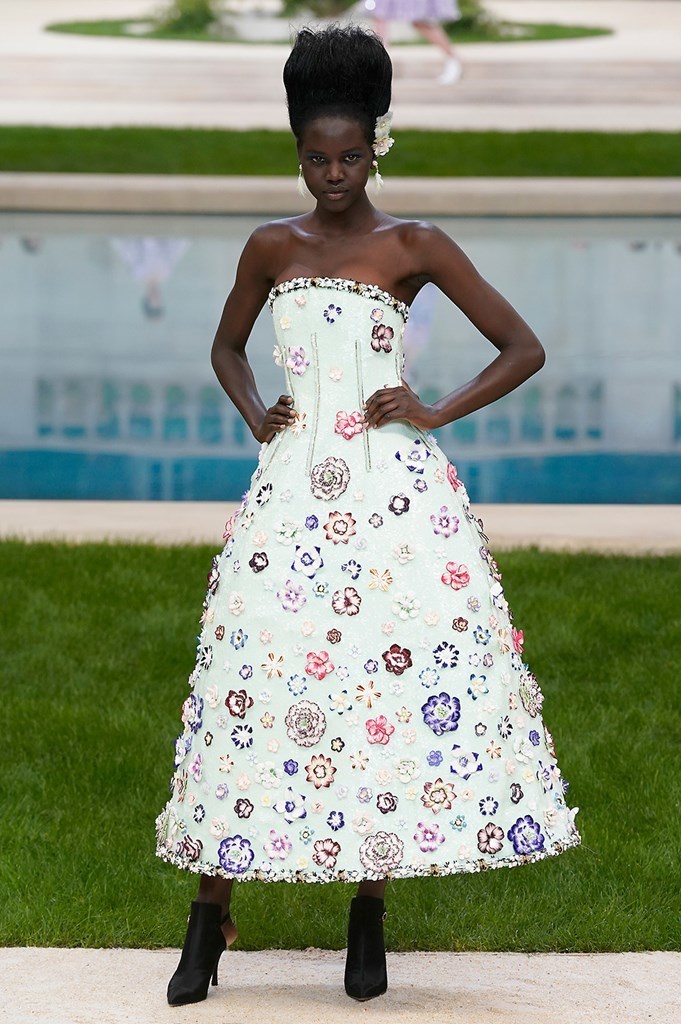 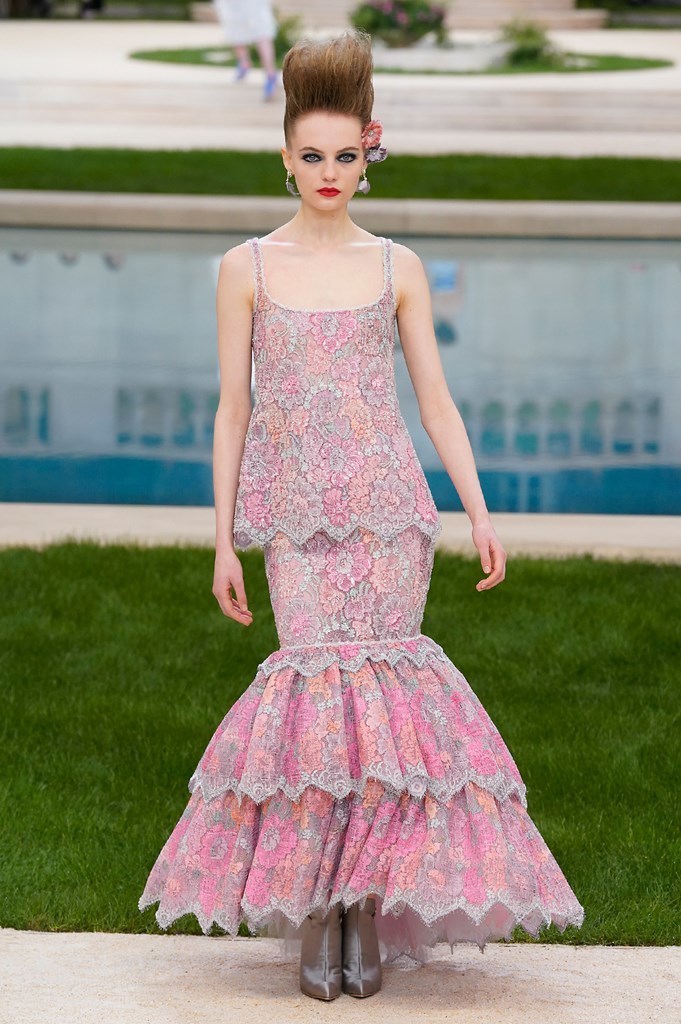 LOOK 59 – Entirely covered in thousands of petals, this Haute Couture look is composed of a peplum lace top and a long skirt embellished with a flounced quille. With its thin, embellished straps, the elongated, fitted bodice contrasts with the fullness of the flounces closer to the hem. The embroideries on tulle were done in crochet, with needles, or stitched using a Cornely machine; a close examination reveals constellations of flowers in gradations of rosewood, matte violet and opaline green, sometimes illuminated with minuscule sparkly paillettes. 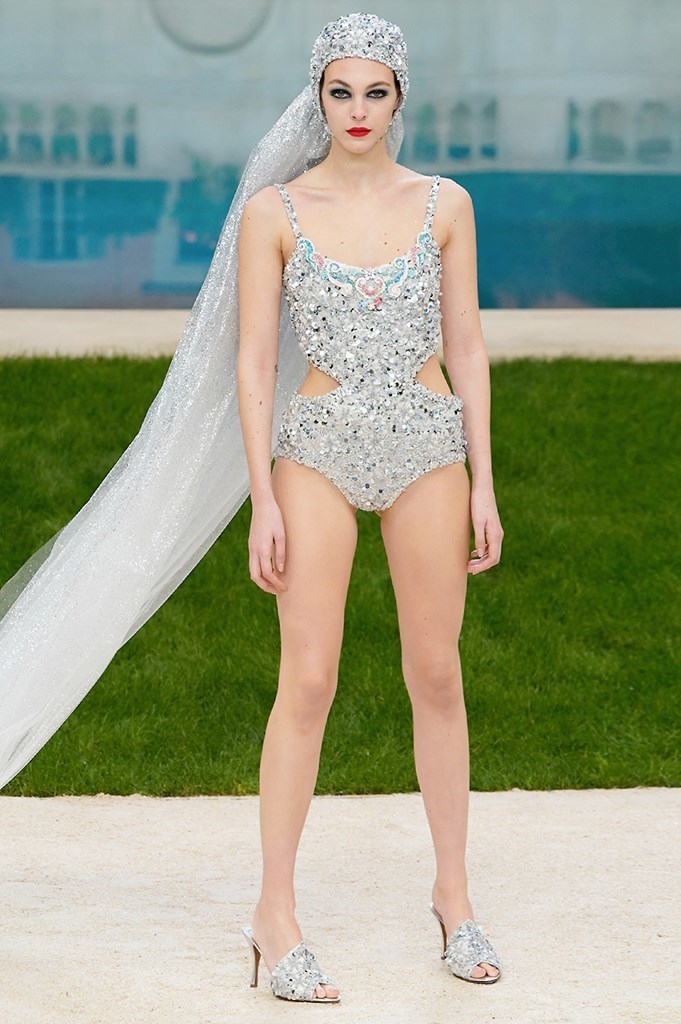 LOOK 62 The Bride Dress – To close the Spring-Summer 2019 Haute Couture show, the model Vittoria Ceretti wore an unusual bride dress: a one-piece bathing suit with a deep décolleté in back and intricate embroideries of sparkling silver beads, stones and paillettes. This crystalline relief by the Maison Lesage was reprized on a matching swim cap and the look was accessorized with a veil-train embroidered with iridescent paillettes. 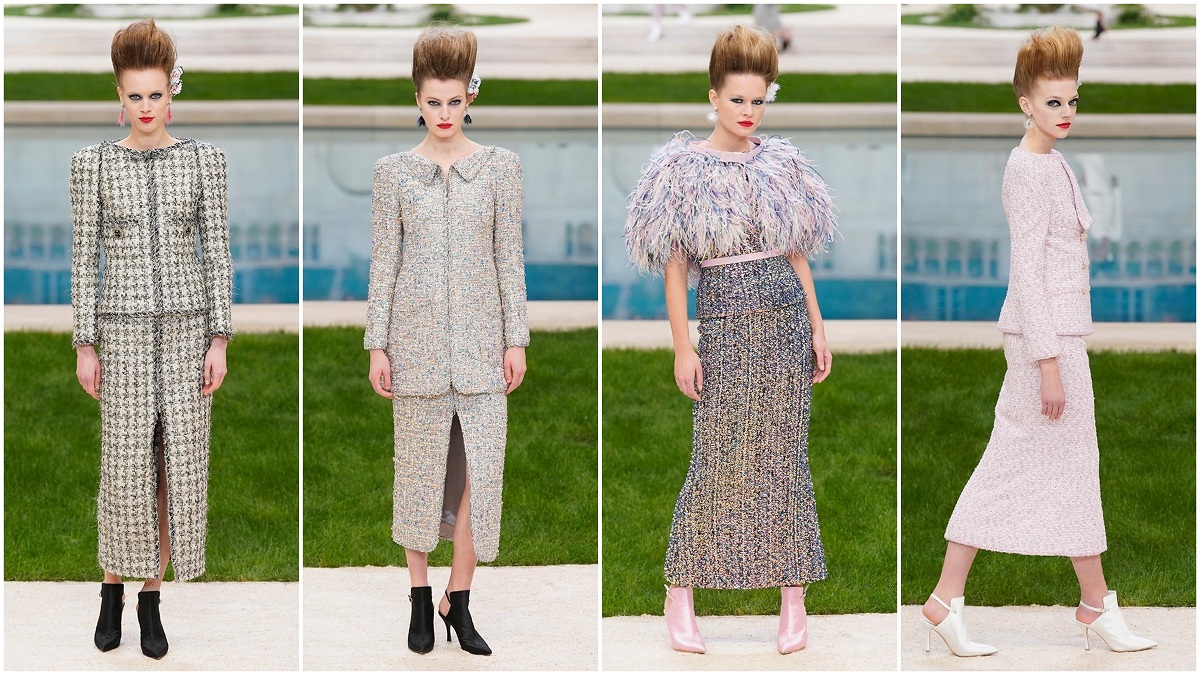 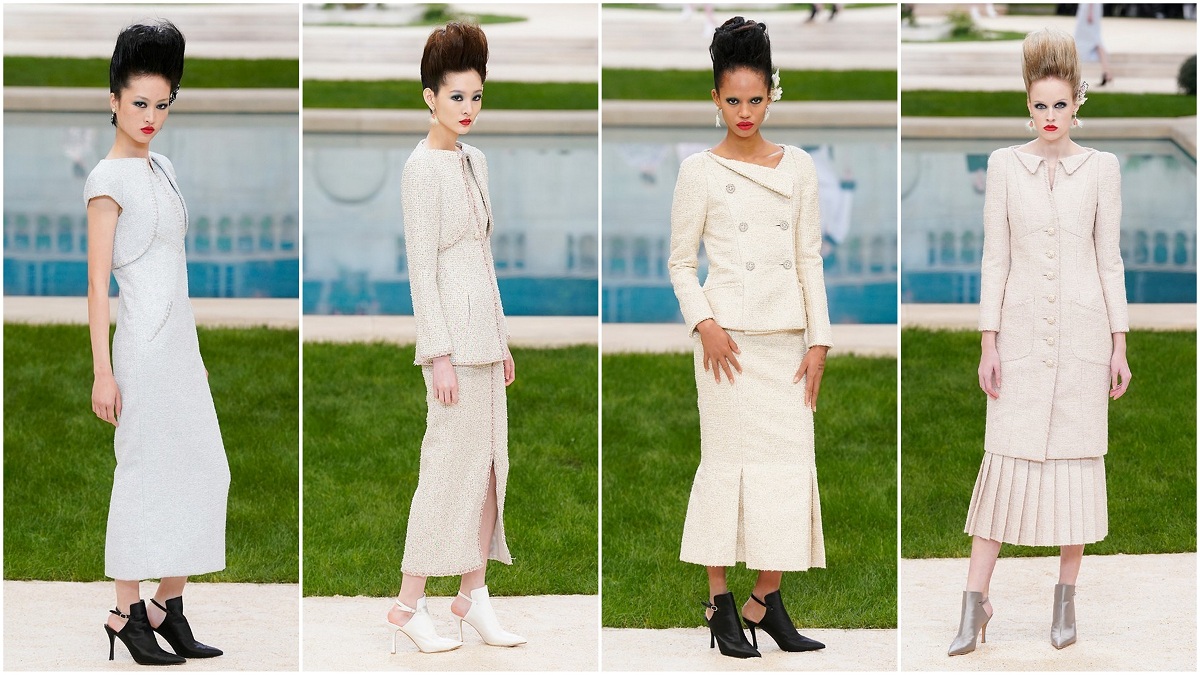 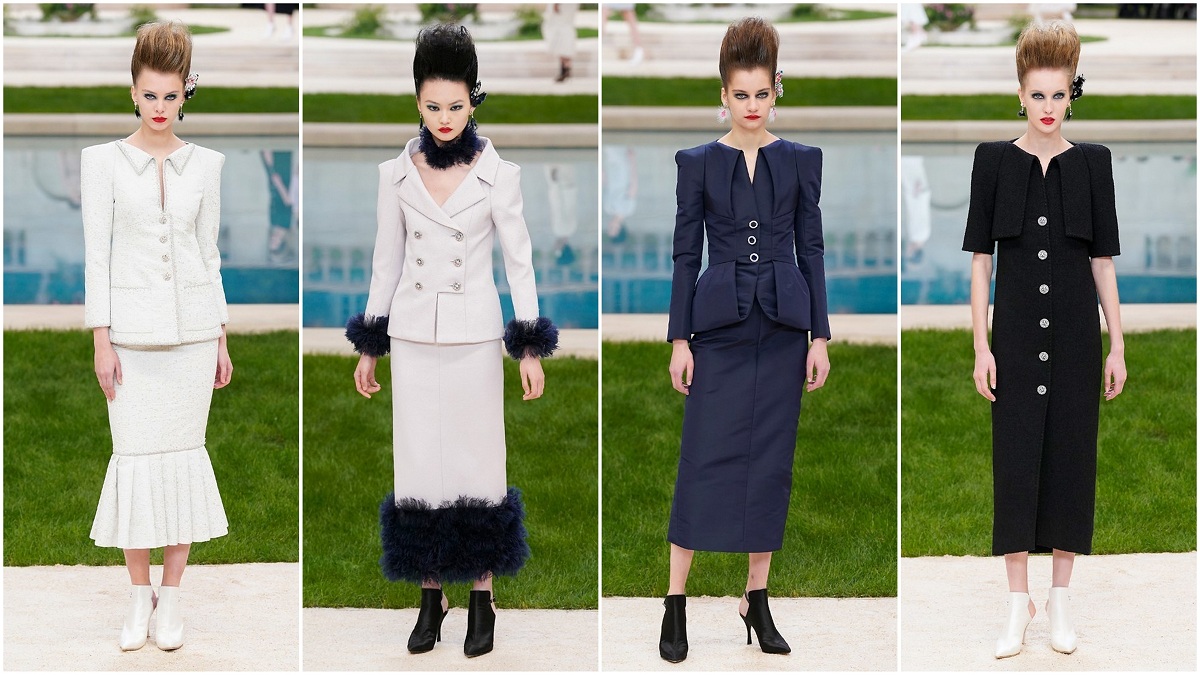 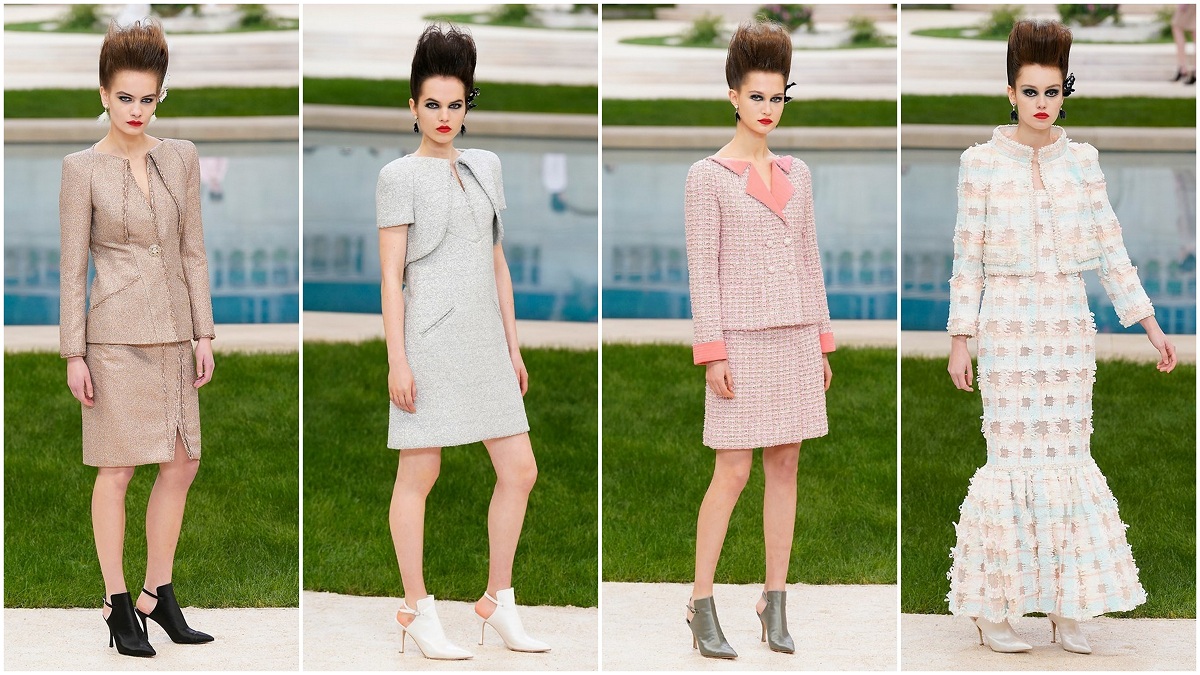 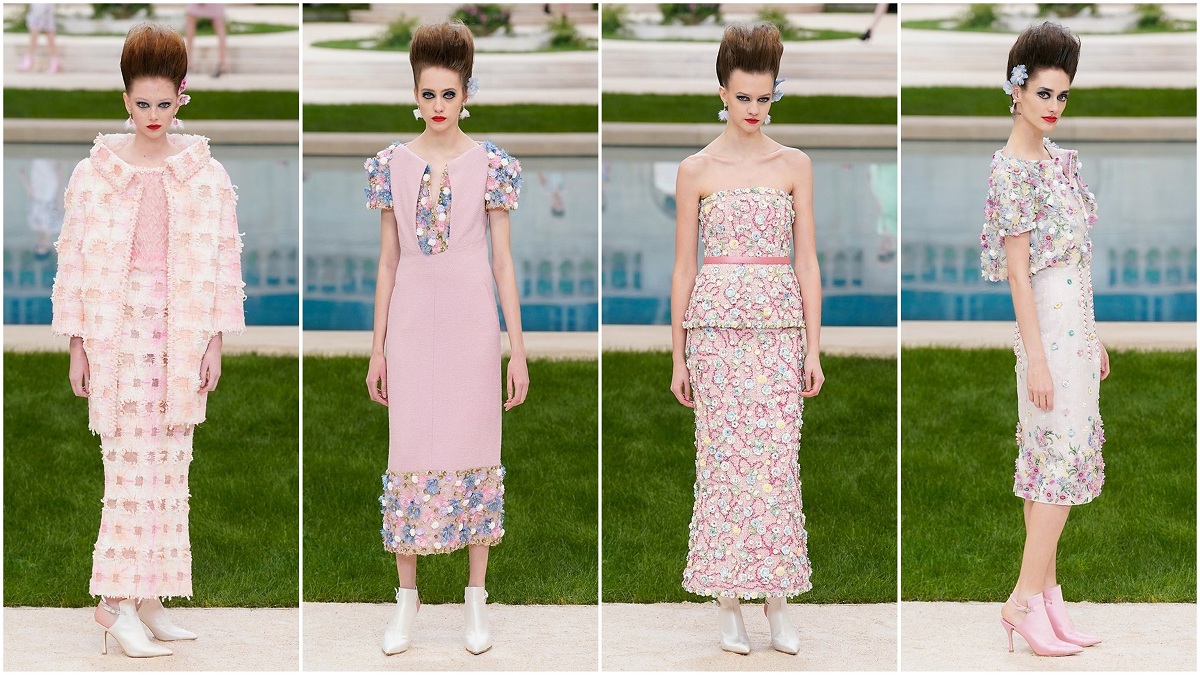 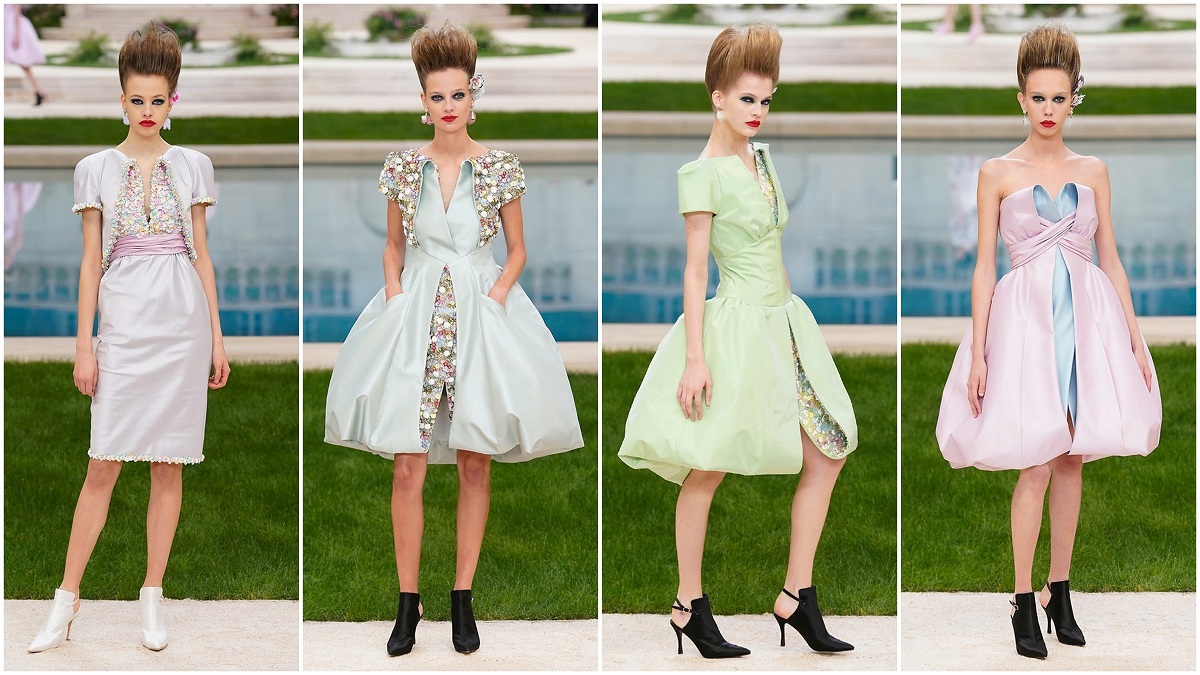 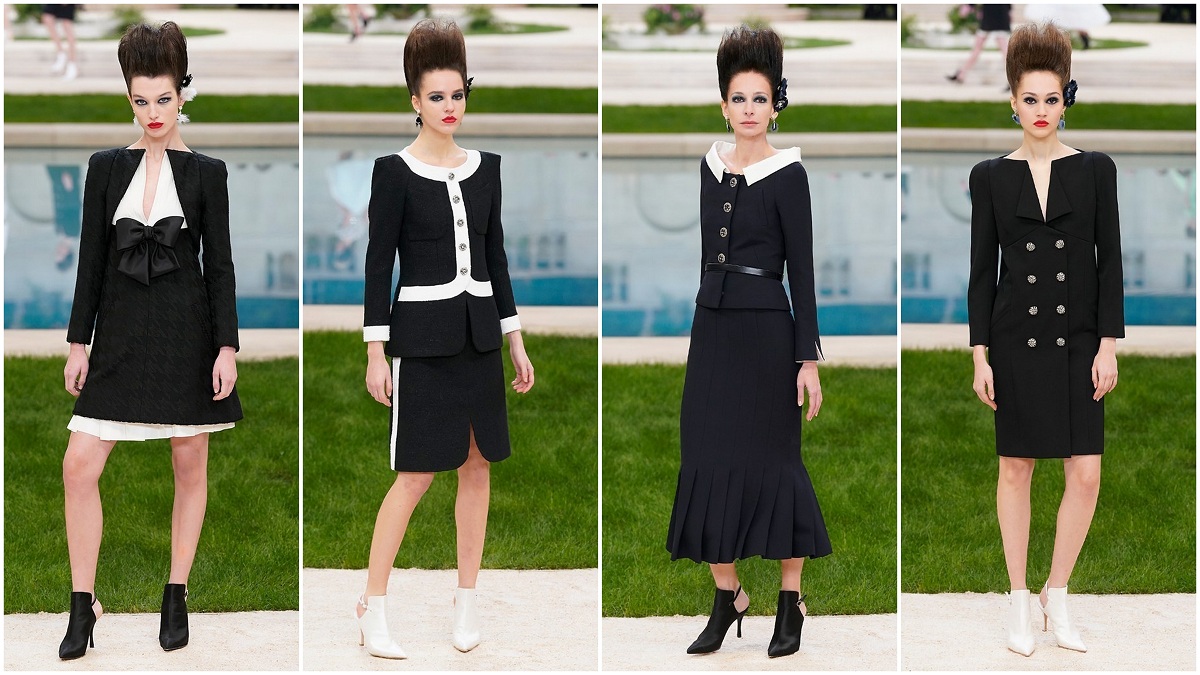 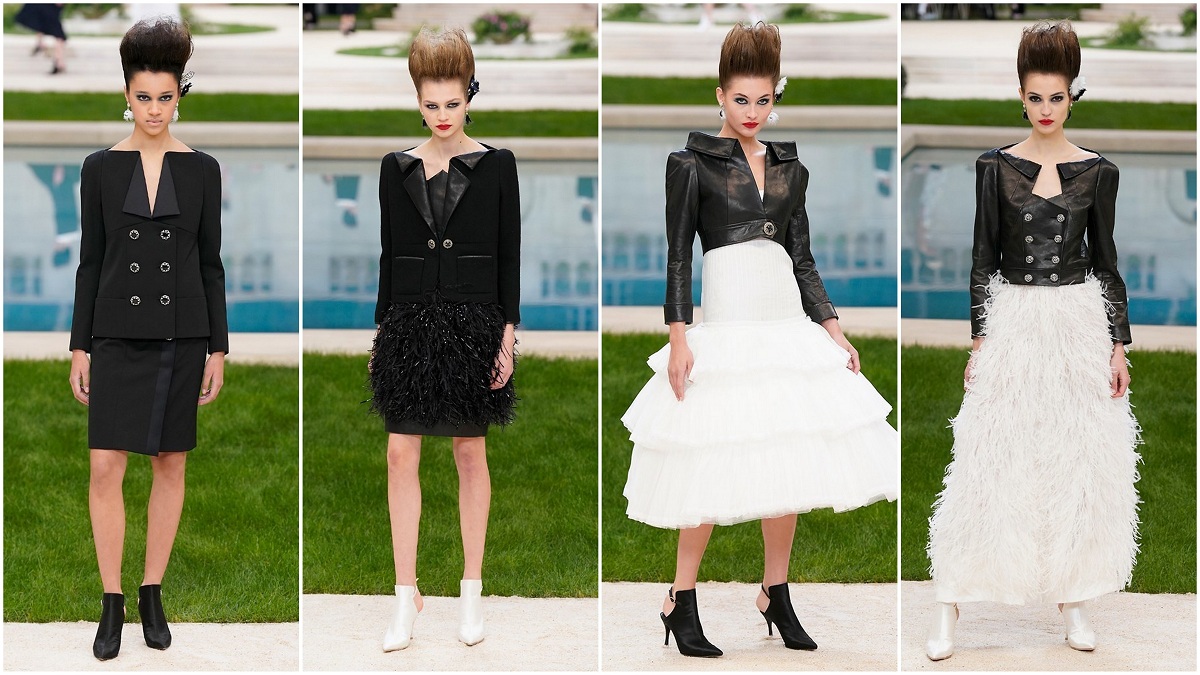 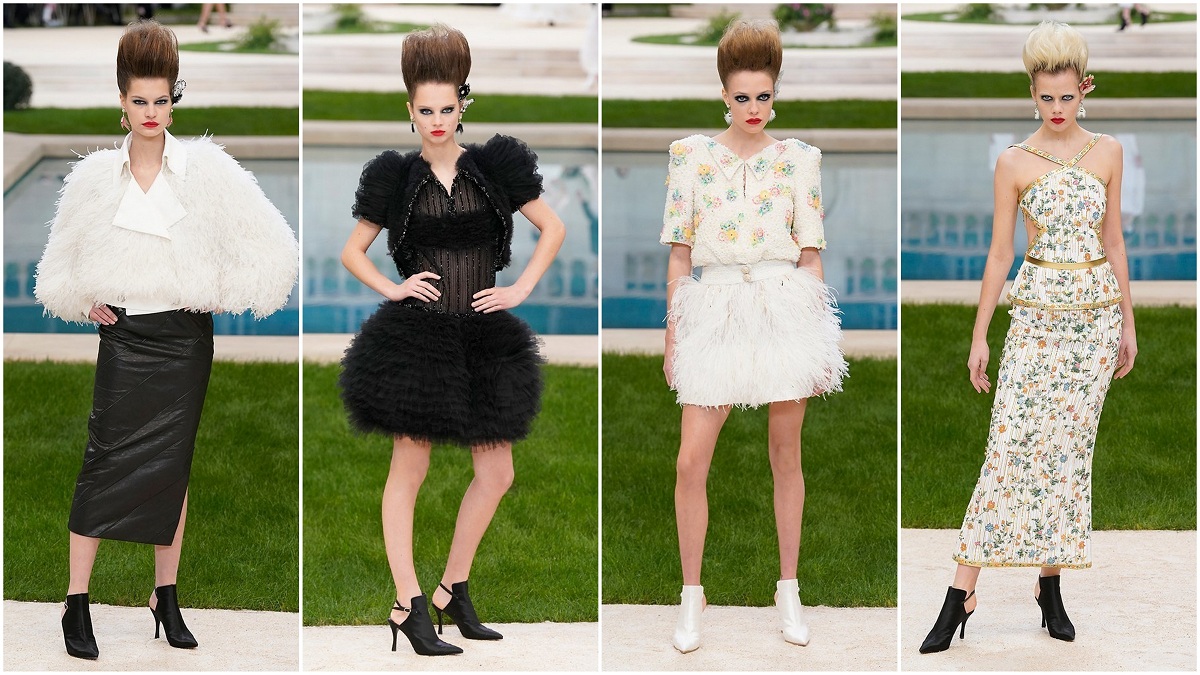 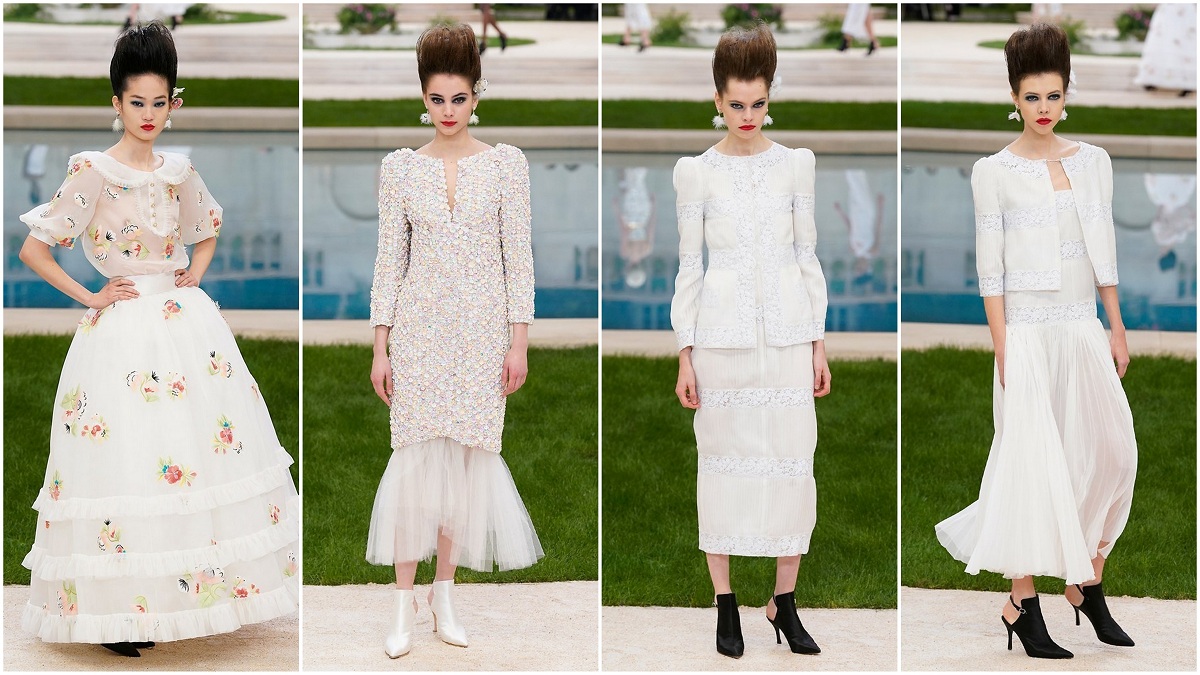 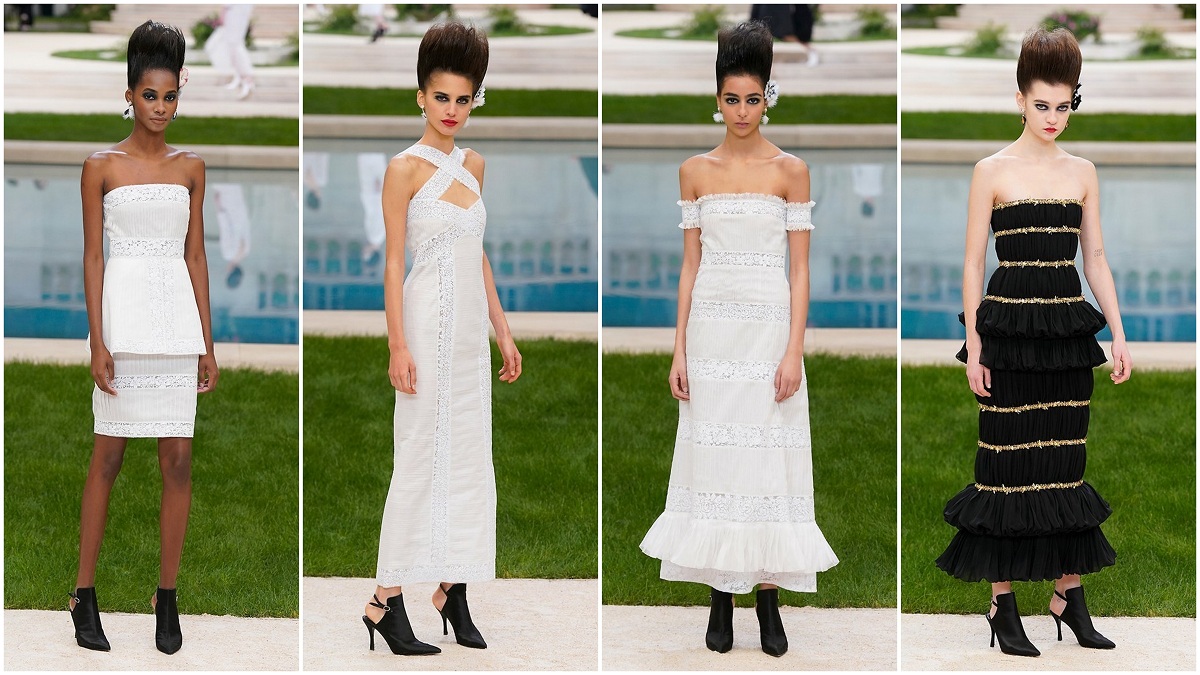 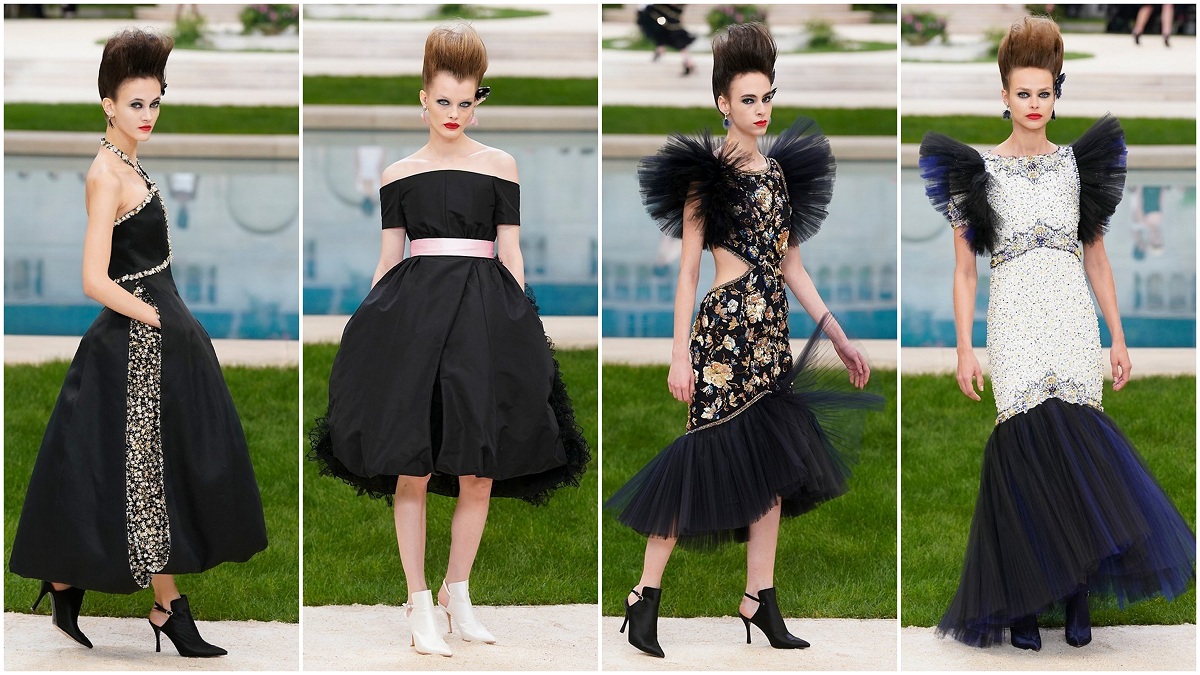 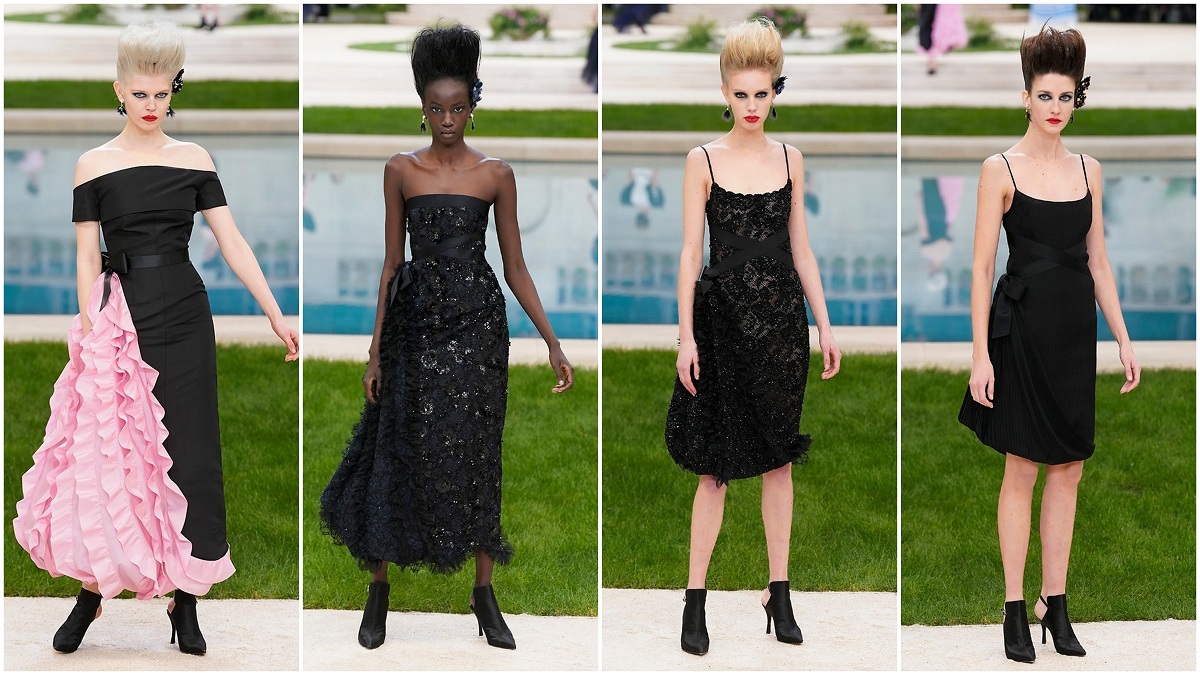 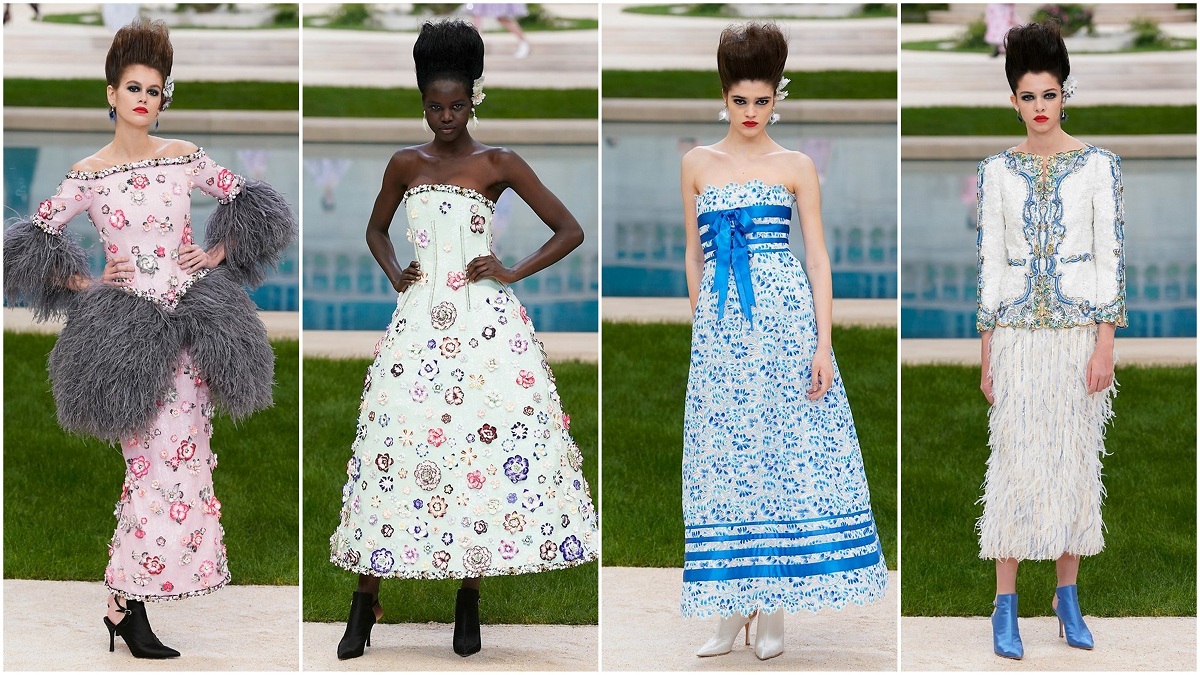 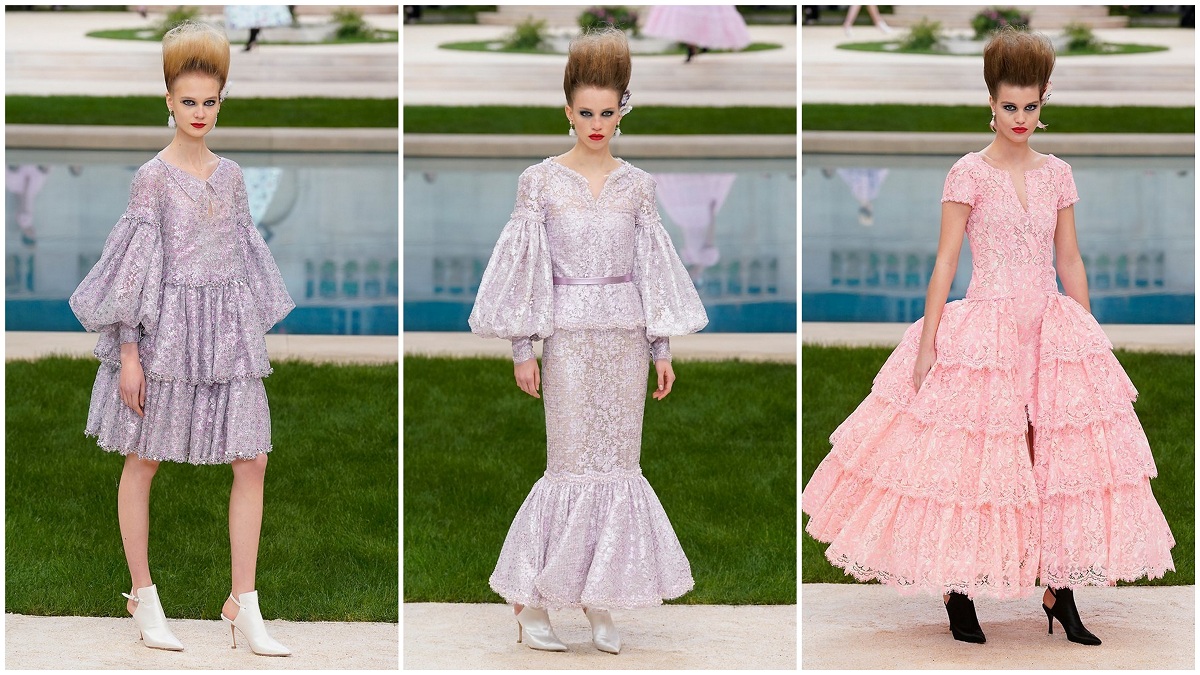 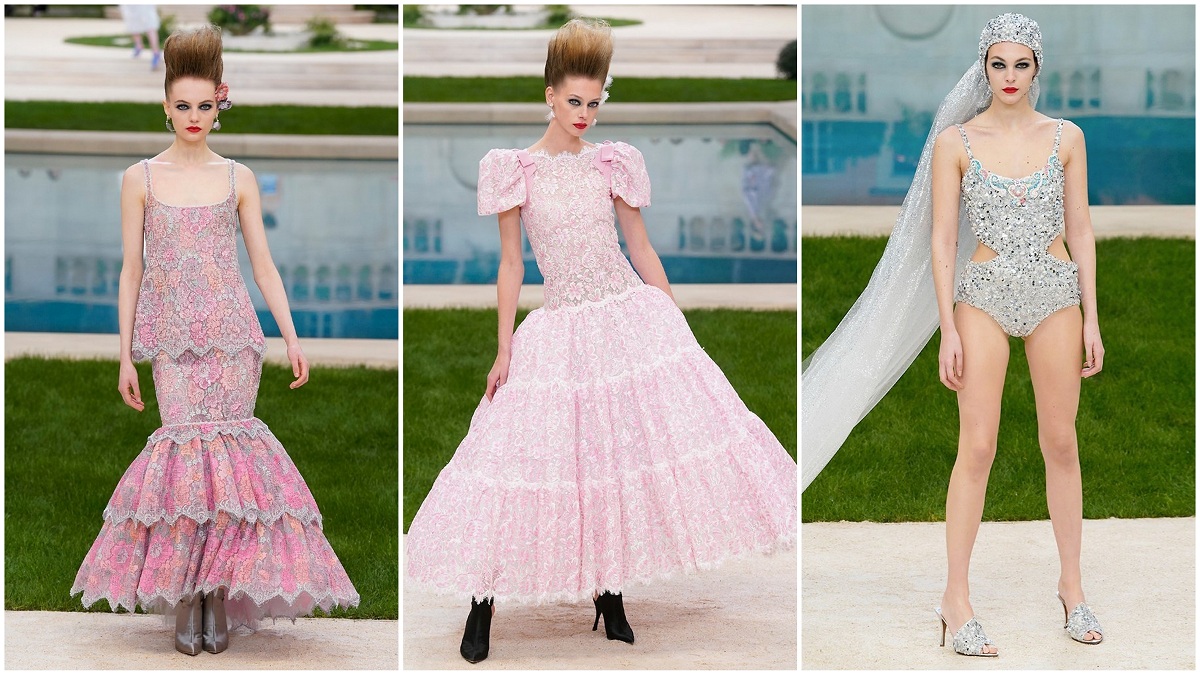