An evening at the castle: Chanel Métiers d’art 2021 collection 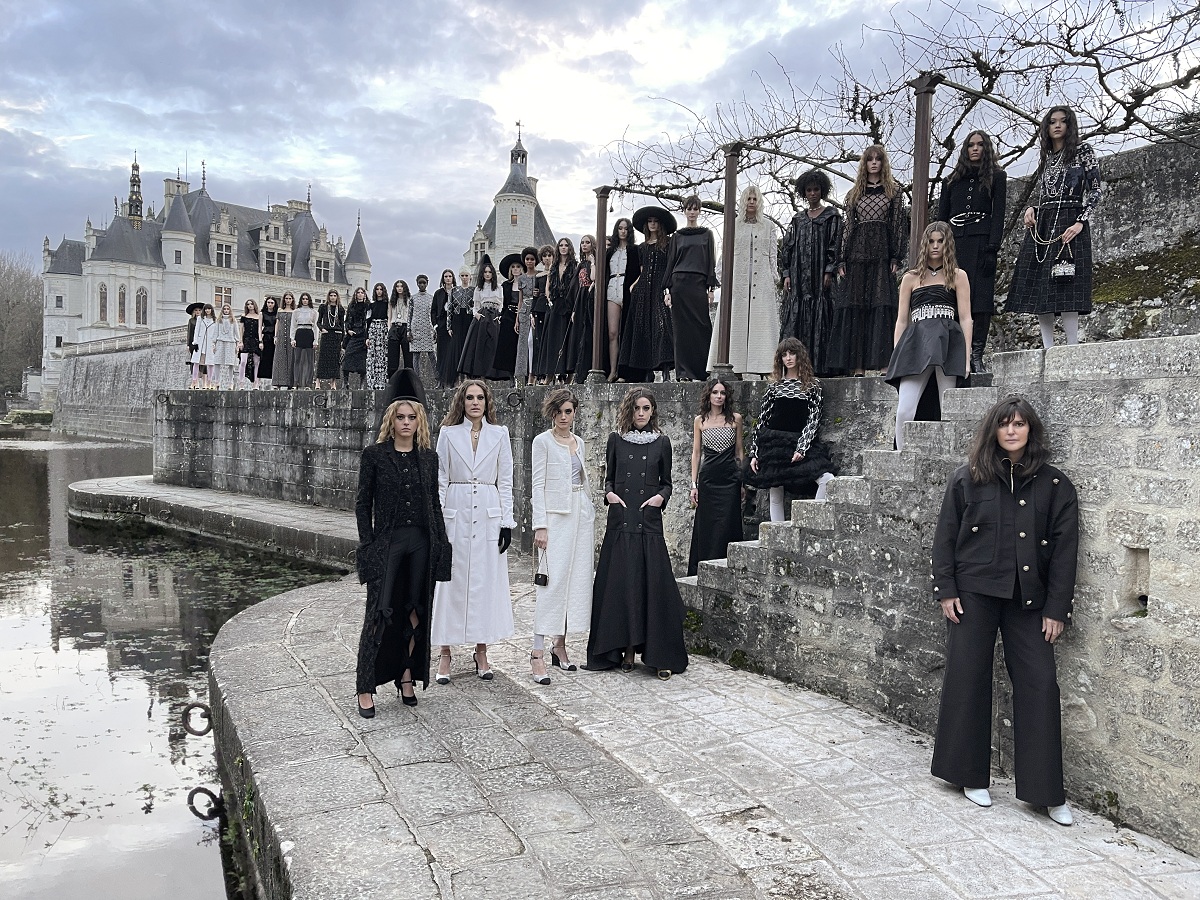 “Showing at the Château de Chenonceau, at the “Château des Dames”, was an obvious choice. It was designed and lived in by women, including Diane de Poitiers and Catherine de’ Medici. It is a castle on a human scale. And Catherine de’ Medici’s emblem was a monogram composed of two intertwined Cs, just like that of Chanel,” confides Virginie Viard. 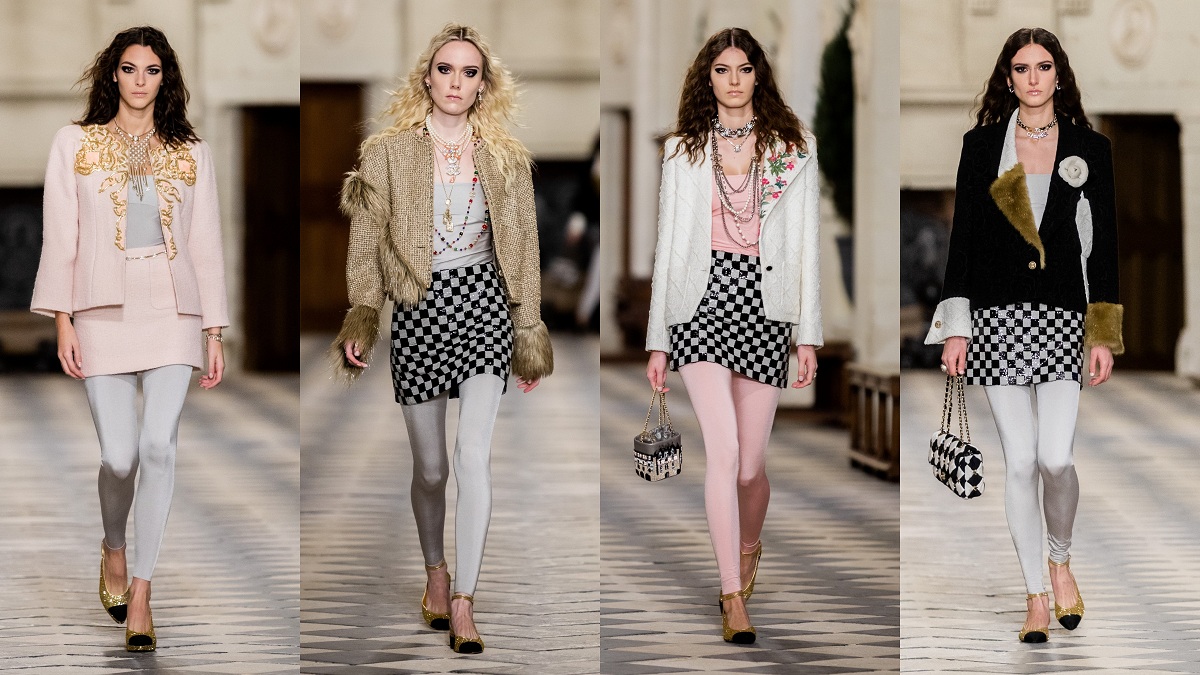 “We don’t know if Coco was directly inspired by her, but it is highly likely because she so admired Renaissance women. Her taste for lace ruffs and the aesthetic of certain pieces of her jewellery come from there. Deep down, this place is a part of Chanel’s history.” In 1936, Gabrielle Chanel wrote an article on the women of that era: “I have always been struck by a strange feeling of sympathy and admiration towards the women who lived from François I er to Louis XIII, perhaps because I find them all to be great, with a magnificent simplicity and a majesty imbued with onerous duties.” 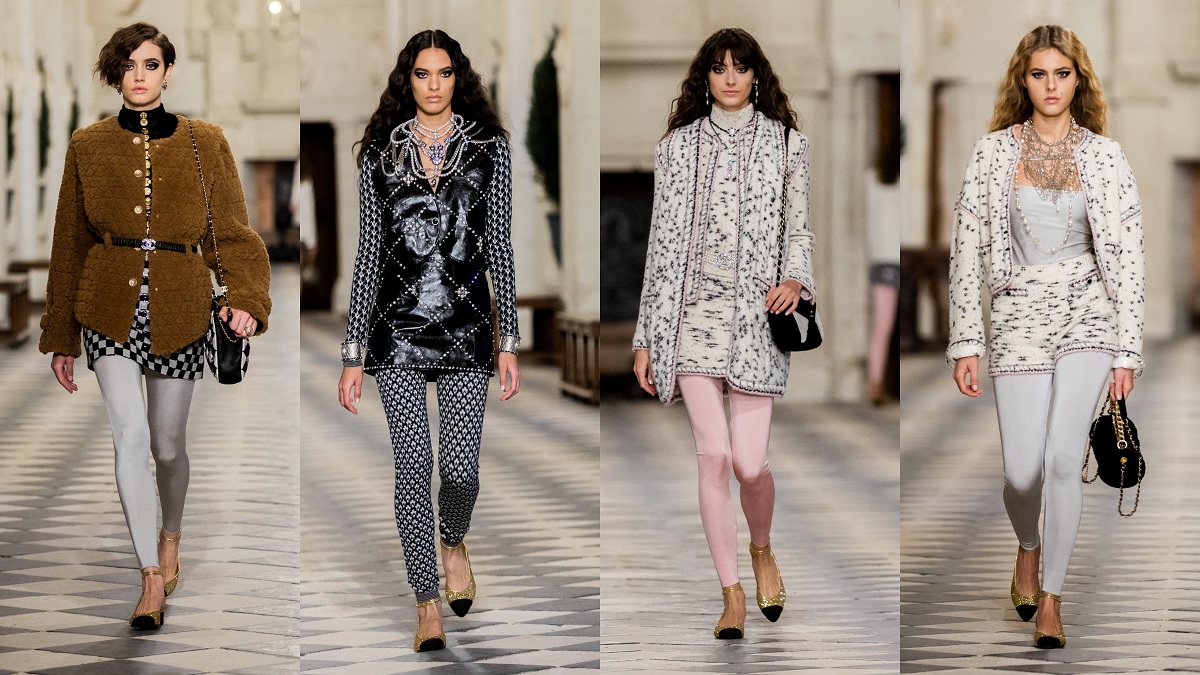 In the grand gallery where the runway show takes place, the black and white chequered motif on the floor is reminiscent of a life-size game of checkers, and appears on sequinned mini-skirts, as well as a long skirt in a fringed geometric tweed patchwork worn with a black and white jacquard sweater. A long coat in black velvet – “which has a “The Bride Wore Black” aspect, because after the death of King of France Henri II, Catherine de’ Medici only wore black” – opens to reveal a suit-body in pale tweed. The warm hues of a tweed cape echo the famous tapestries of the castle, while the flowers from the two gardens, one created by Diane de Poitiers and the other by Catherine de’ Medici, located on either side of the castle, inspired the floral embroideries on the wide lapel of a jacket. 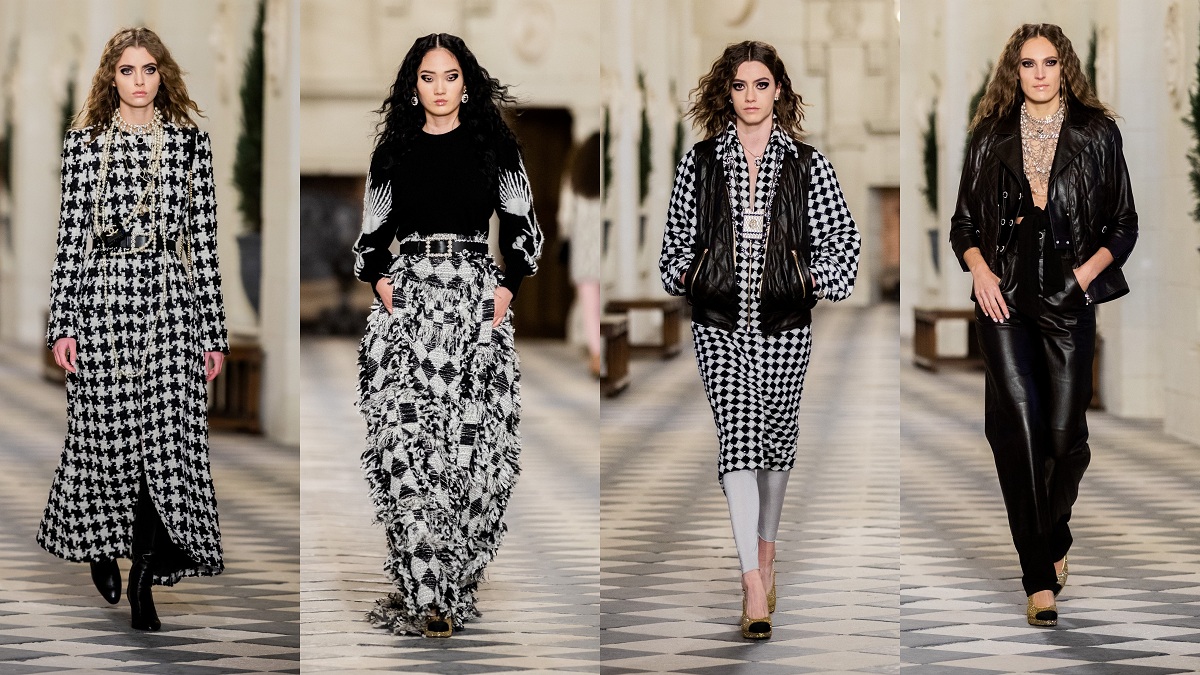 For this 2020/21 Métiers d’art collection, Chanel’s artisan accomplices live up to expectations more than ever: a long black lace dress composed of lattices punctuated with studs, made by Lemarié; the top of a damask dress embroidered entirely by Lesage; the two-tone sparkling silver platform sandals and the tapered black boots with fold-over cuffs and high heels made by Massaro. “And a big black hat by Maison Michel, for a look that is very Milady! I also asked the Atelier Montex to make embroideries from the castle in the style of a child’s toy in strass. Because I like everything to be mixed up, all the different eras, between the Renaissance and romanticism, between rock and something very girly, it is all very Chanel.” 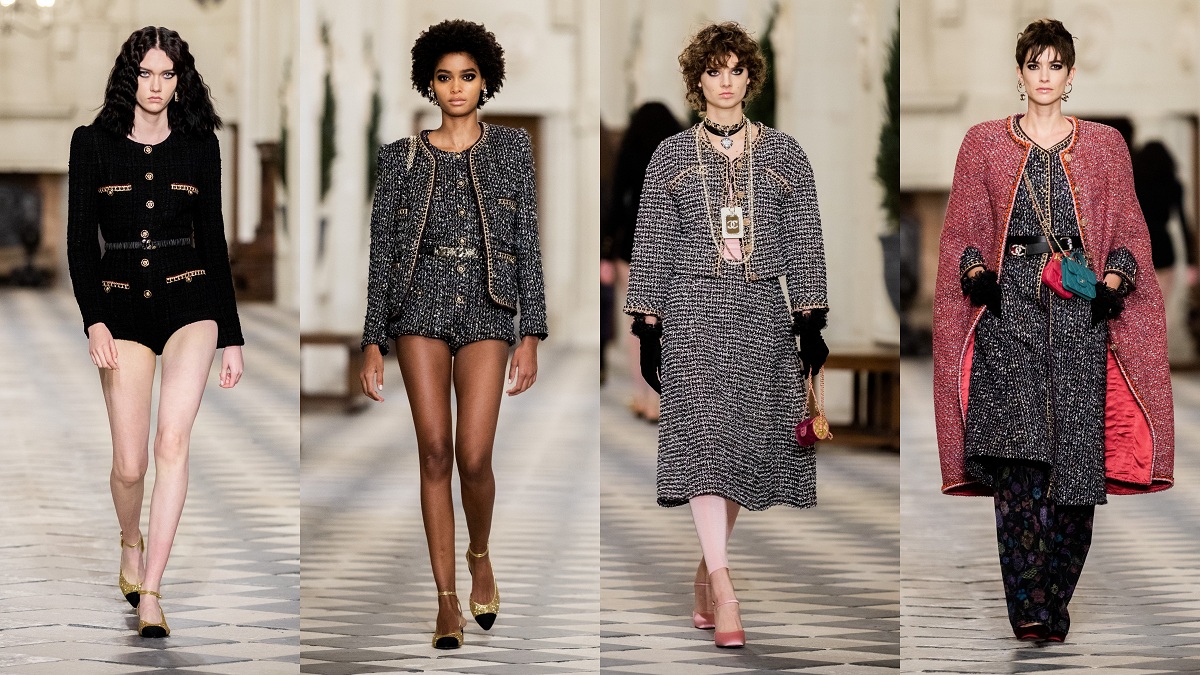 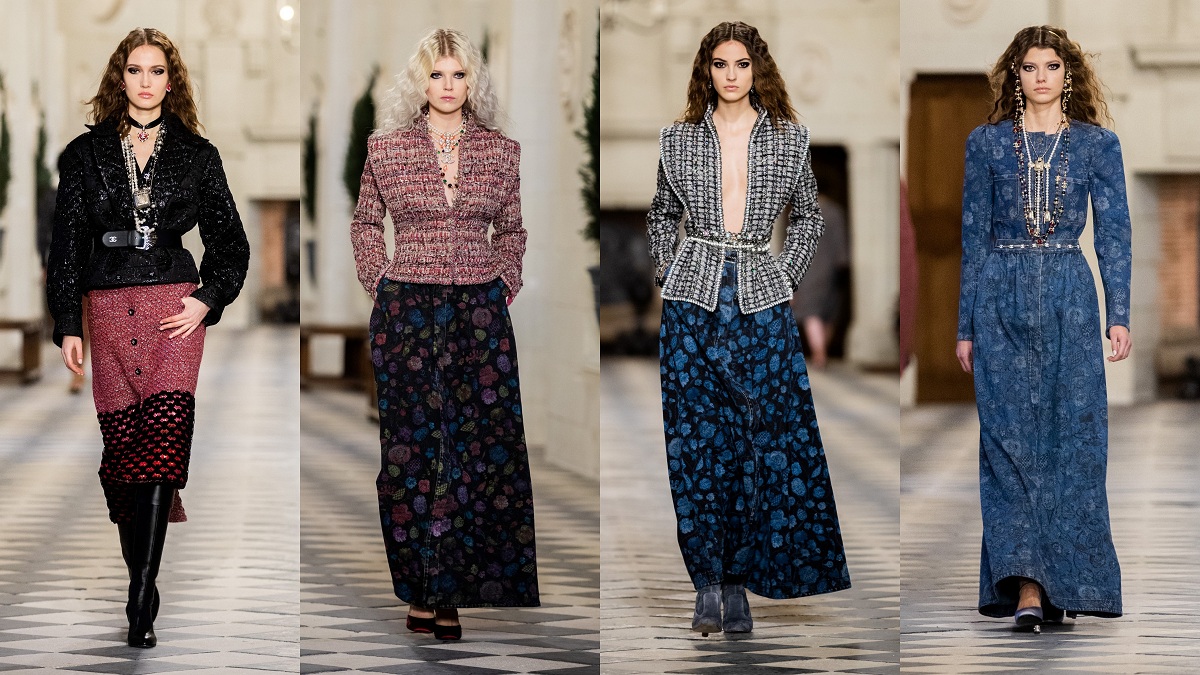 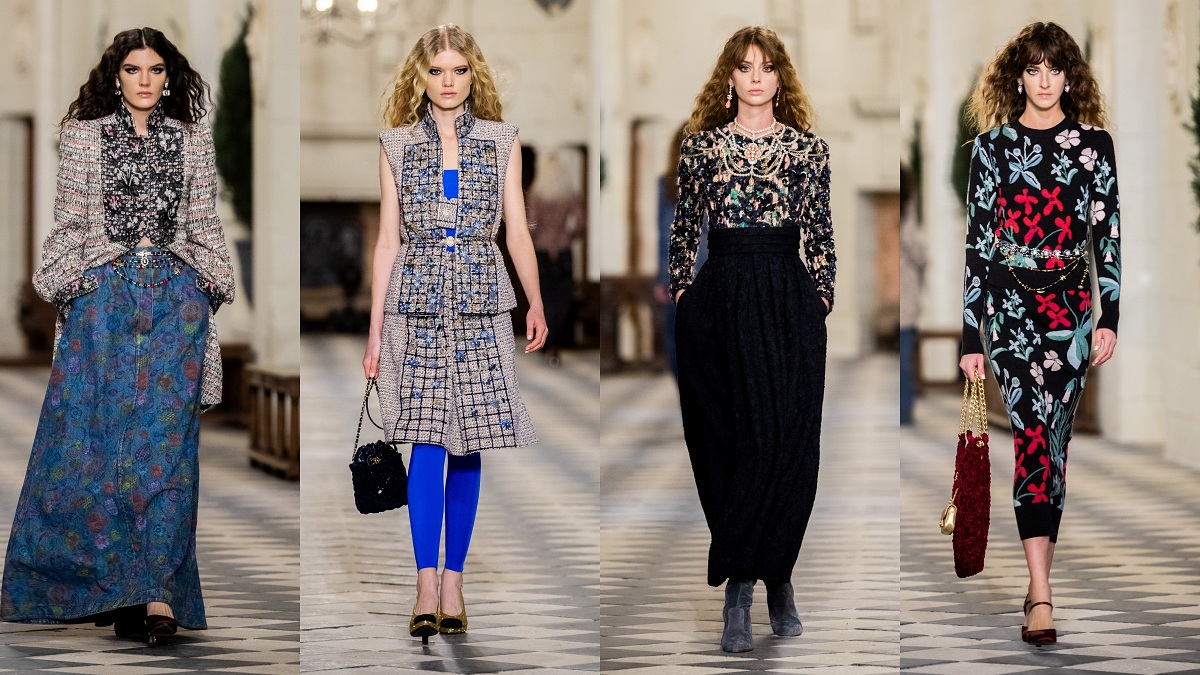 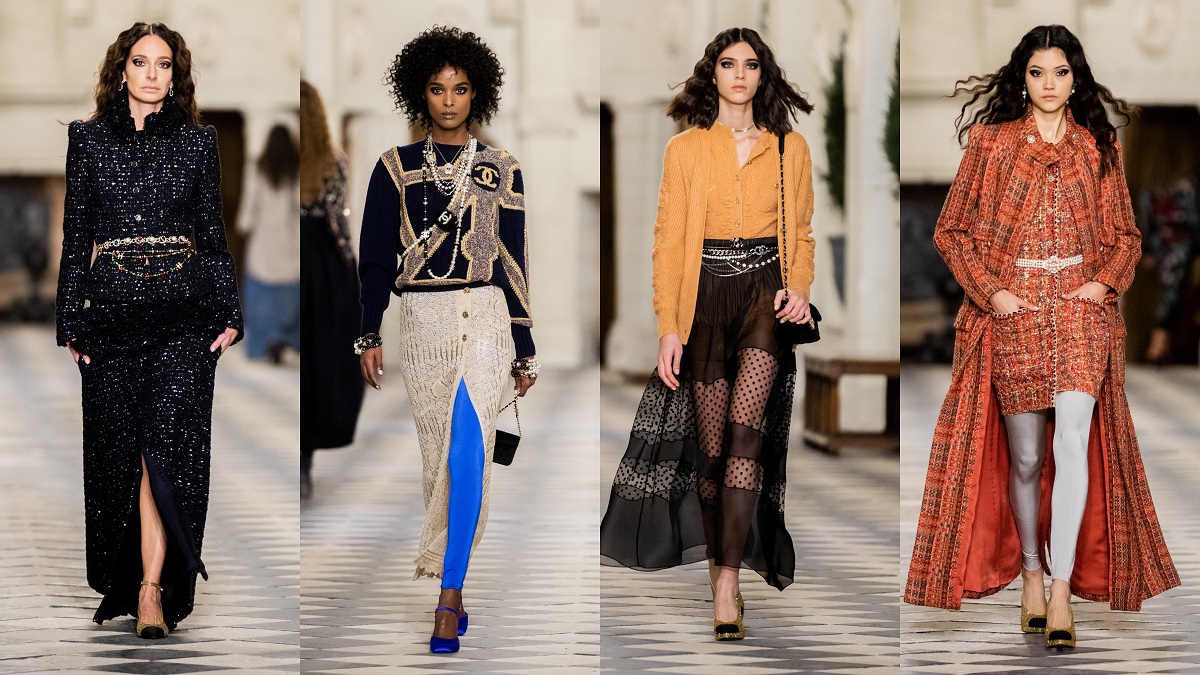 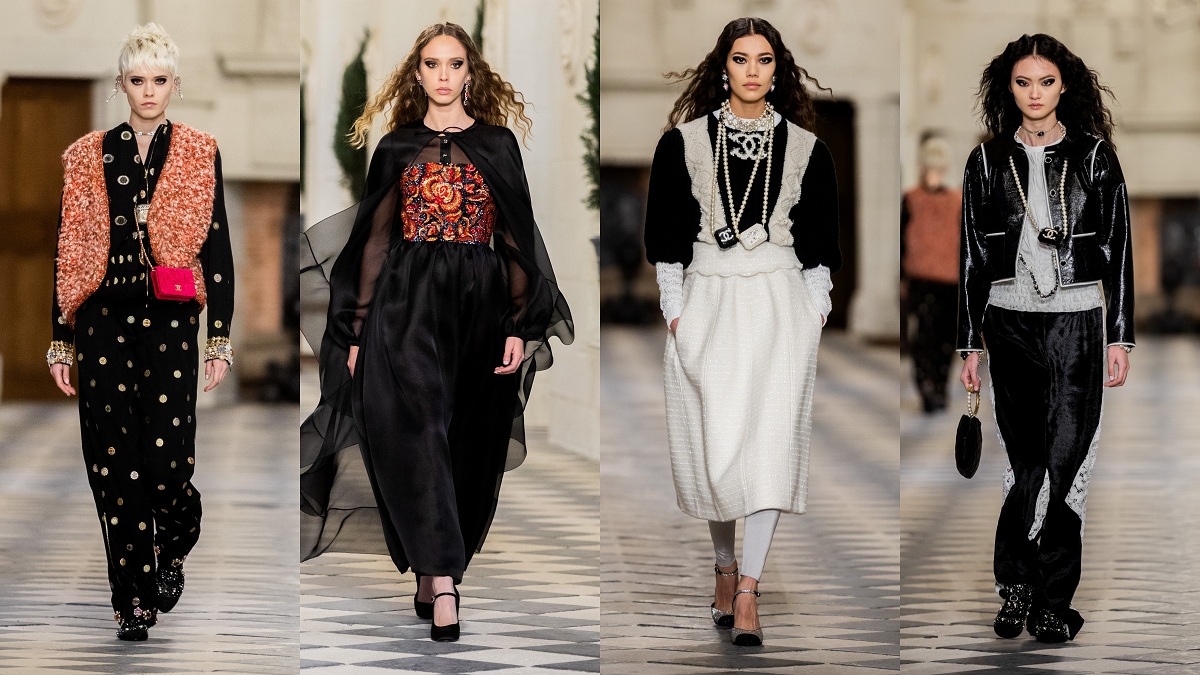 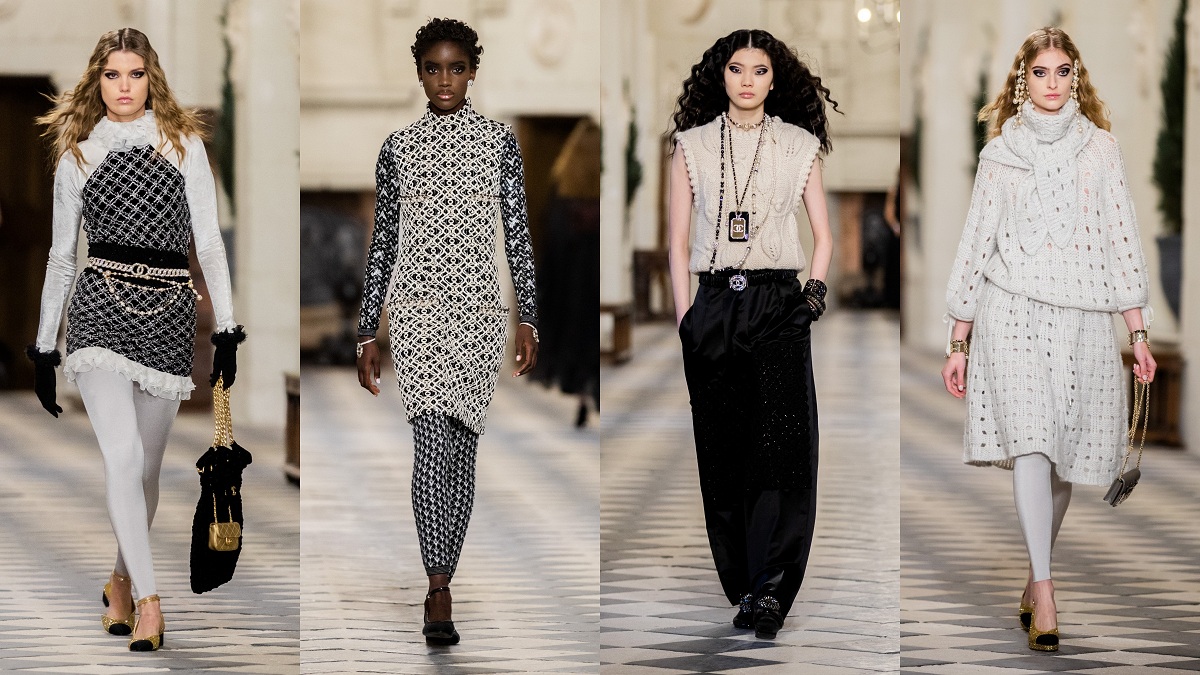 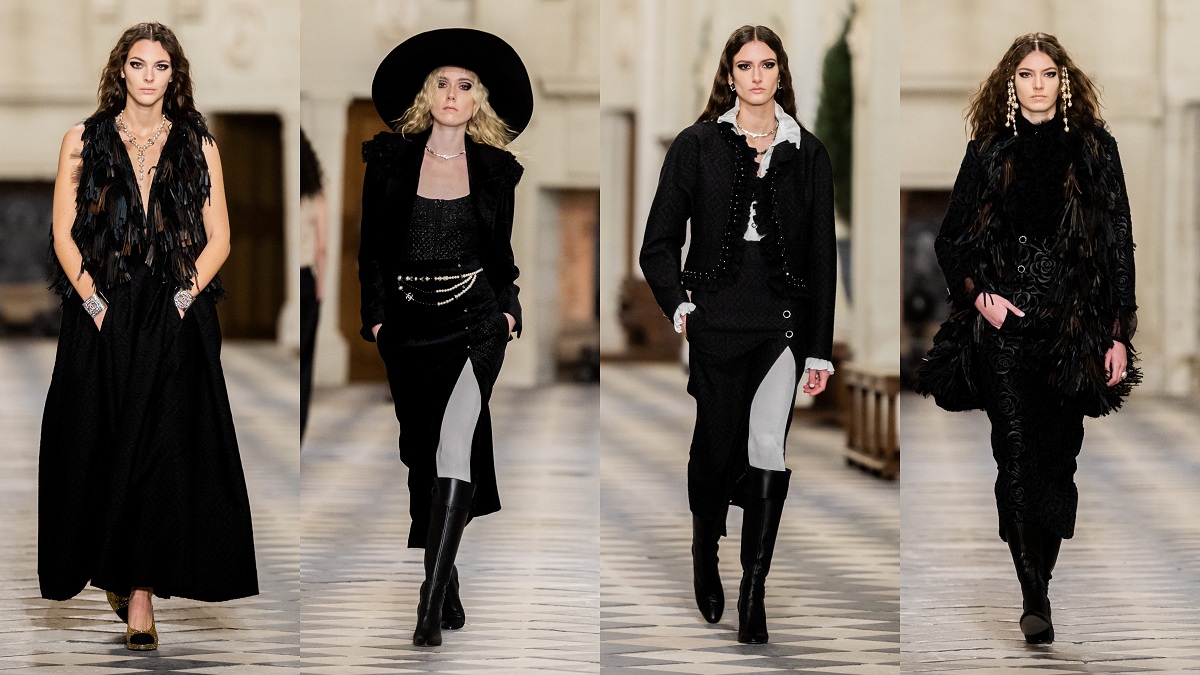 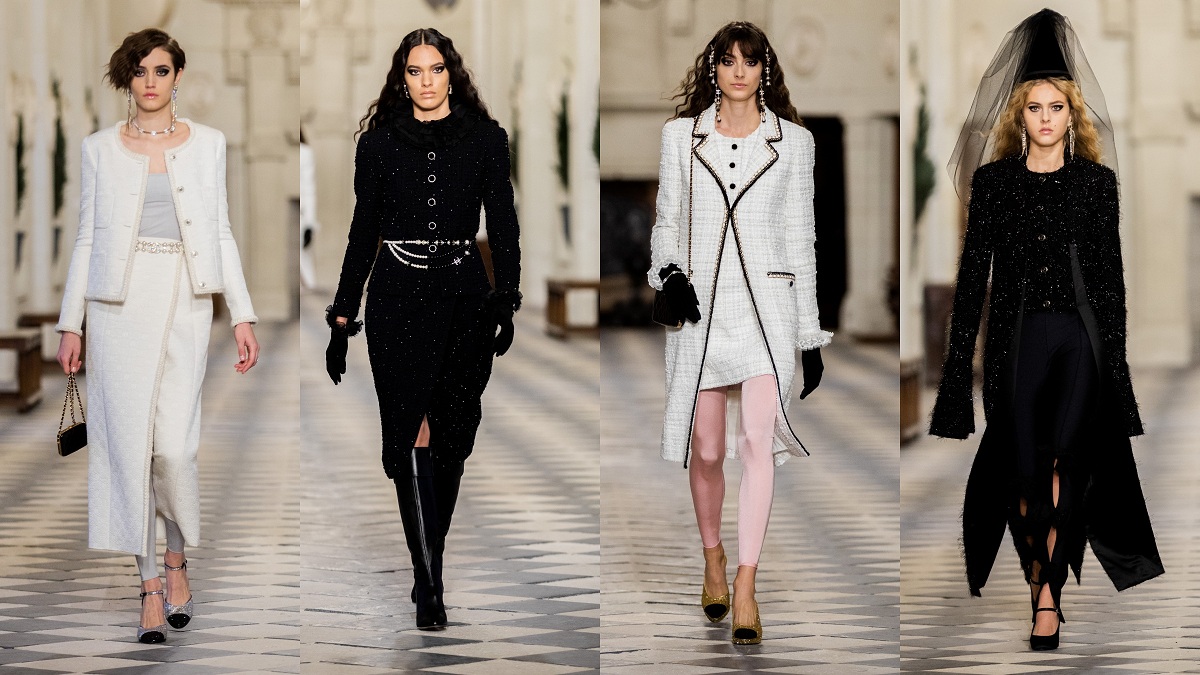 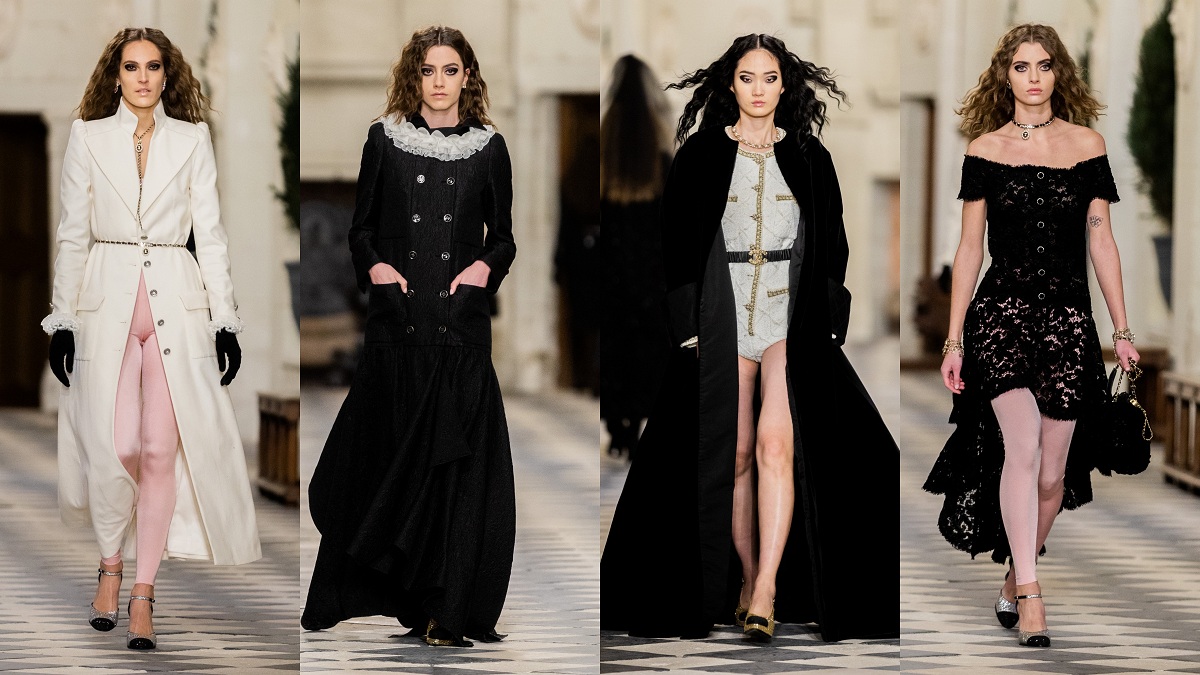 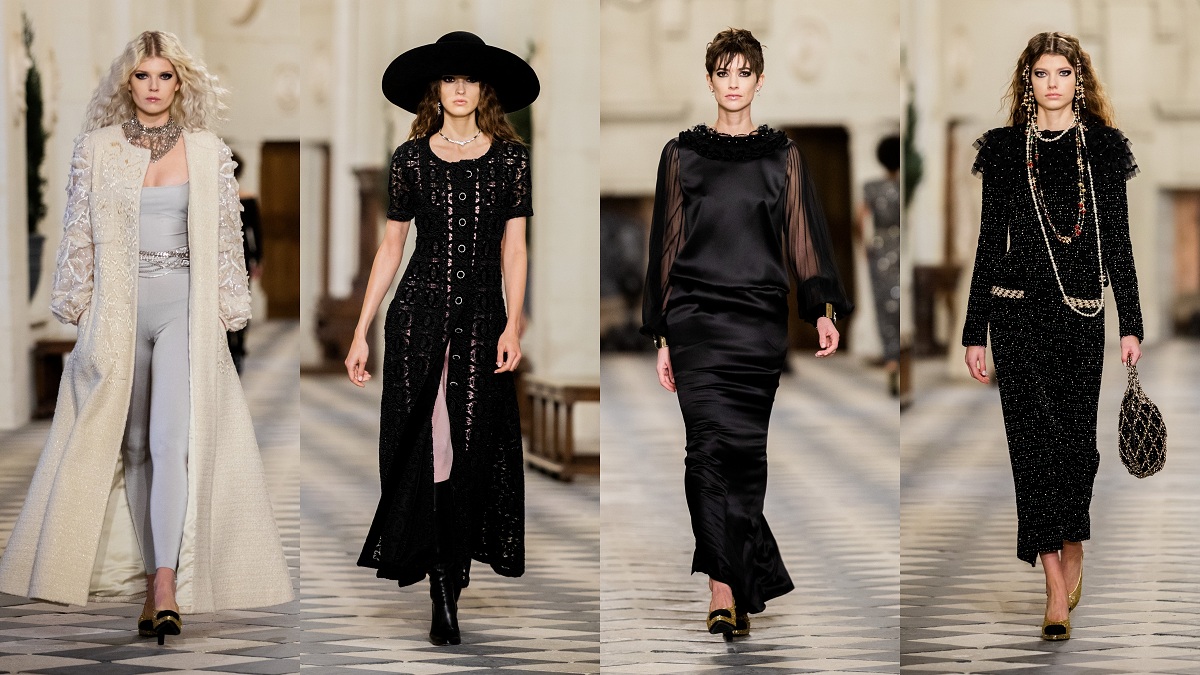 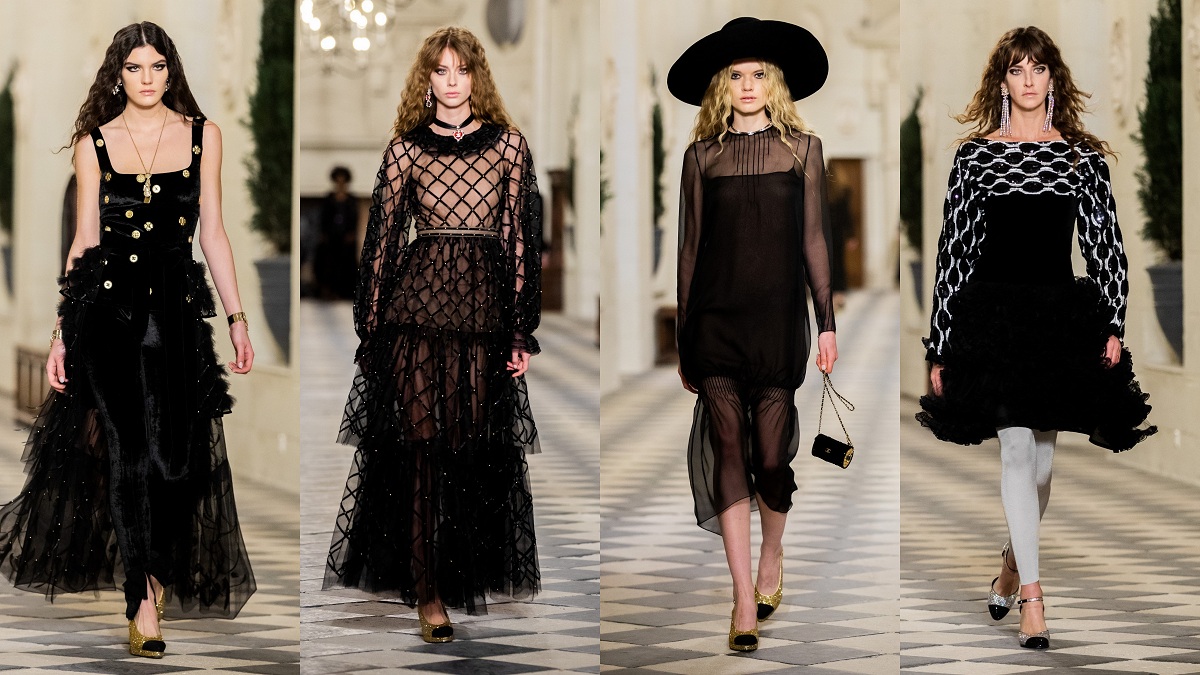 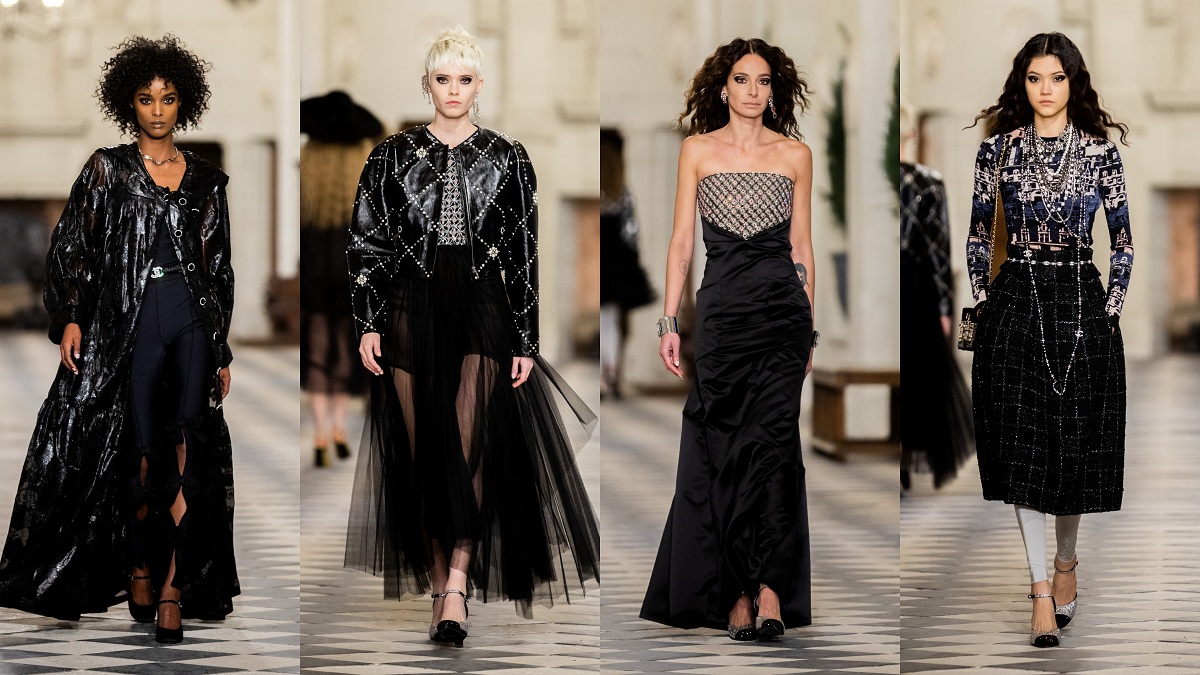 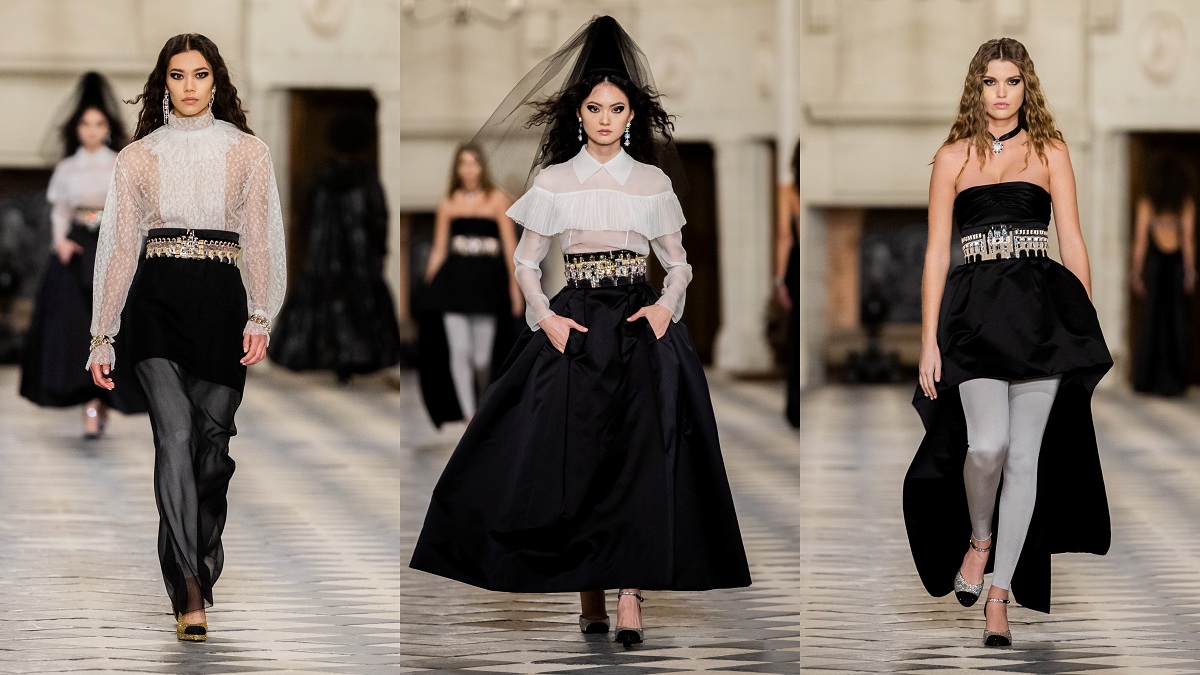