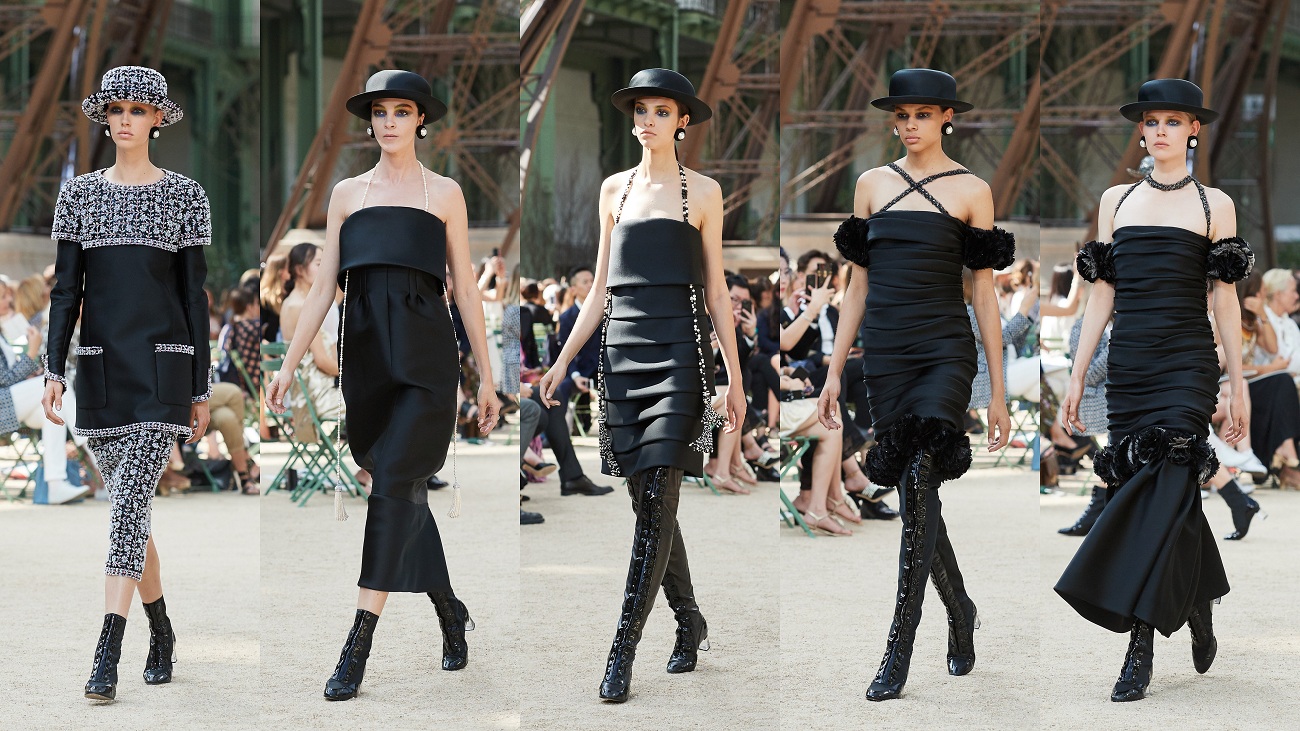 It is said that Paris is the most beautiful city in the world. Its Eiffel Tower is one of the most admired monuments. Beneath the glass ceiling of the Grand Palais, a 38-meter high reproduction of the Eiffel Tower imposes its majesty. All around, chairs from Parisian parks invite leisurely strolling and the rediscovery of Paris. Conceived by Gustave Eiffel for the Exposition Universelle of 1889, the Eiffel Tower was the tallest edifice ever built by man and symbolized the industrial era into which the world was heading. It inspired many artists including the painter Robert Delaunay who visualized it with neo-impressionist and cubist lines. Today Karl Lagerfeld pays tribute to Paris in a décor that’s like a beautiful autumn day: “It’s a vision of a revived Parisian woman, it is all about cut, shapes, silhouettes. Here the line is very delineated and graphic, it’s very modern” explains Karl Lagerfeld. His Parisiennes step out in hats, wearing booties or thigh boots buttoned up to infinity. 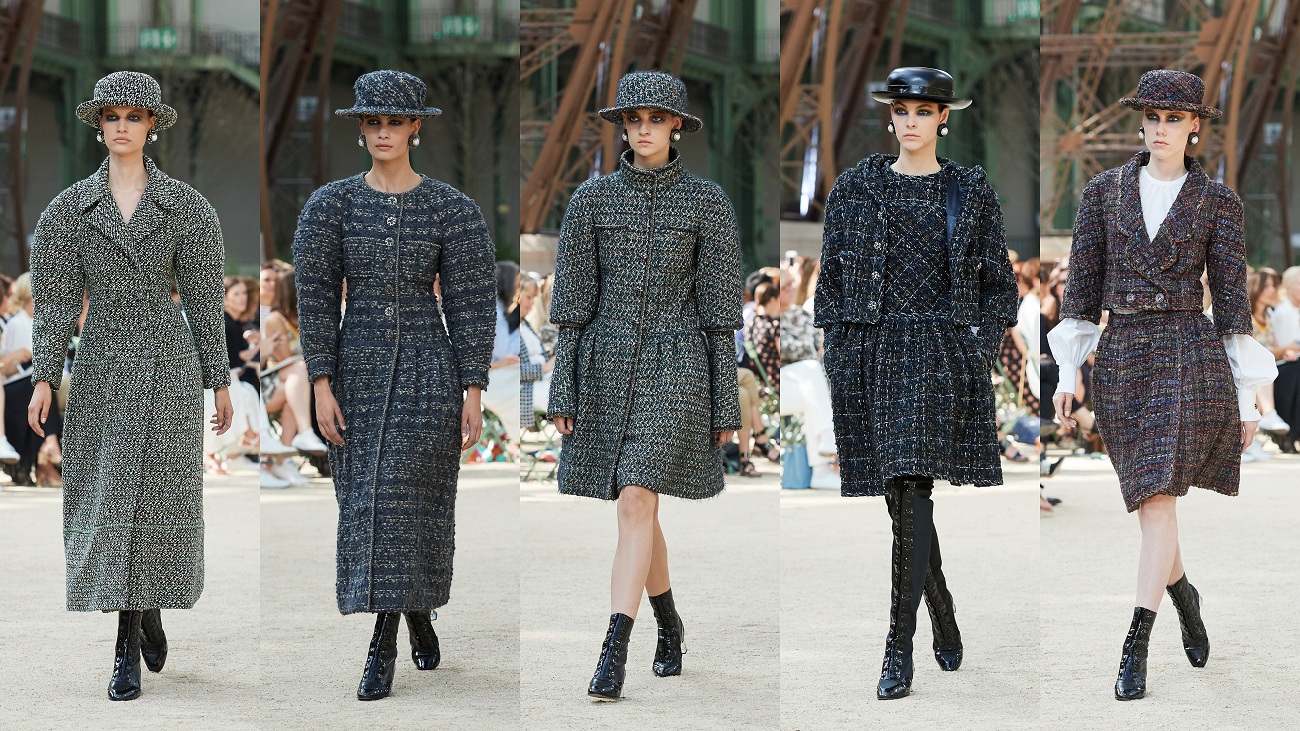 This season the tweed jacket comes as a long tunic, or is cropped and double breasted; its sleeves are cambered or dressed with never-ending fingerless gloves, and bouquets of feathers flourish here and there, “in this collection, there are feathers treated like fur,” reveals the designer. It is worn with dome or wraparound skirts, tubular dresses or wide-cut jumpsuits. The silhouette is graphic, supported by tweeds, mohair, and grey, black and white wools, autumnal palettes in navy blue, burgundy and green. It adopts long, straight volumes, flares into A-lines, or in complete contrast, is rounded on oversize coats, peplum jackets and frock coats with cinched waists. 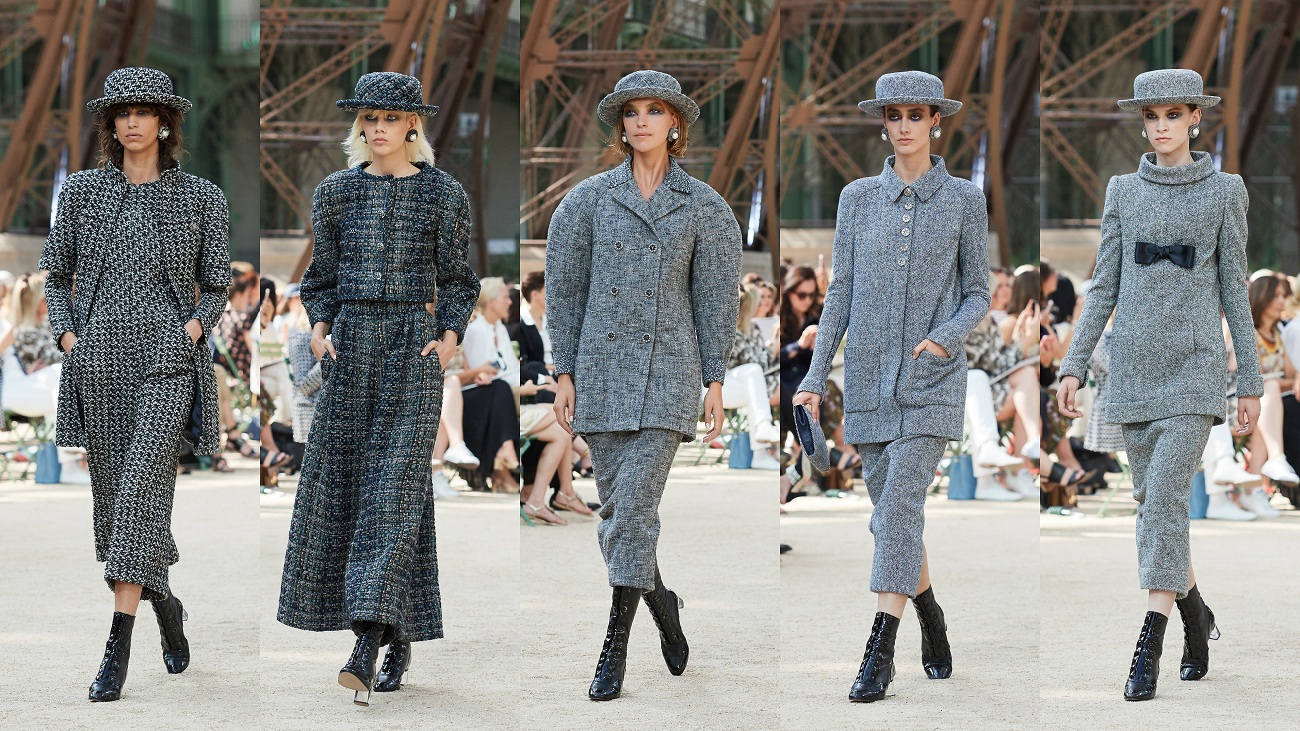 For evening, rust-colored charmeuse, midnight blue chiffon, black silk tulle and double-faced satin… Embroidery sparkles like the Eiffel Tower on a winter’s night; colorful motifs with geometric lines adorn peplum bustiers, long straight dresses, and others puffed up with pleated tulle petticoats or embellished with feathers. Draped sheath dresses and little black dresses in sequinned netting alternate with others whose waists are fitted to exaggerate the dome or A-line shape of their midi or longer lengths. Some are slit to reveal metallic embroidery while others remain perfectly streamlined, disrupted only by wide turned-up hems. The bride finally enters the scene wearing a majestic dress in white double-faced satin, swathed in garlands of feathers resembling bouquets of camellias. 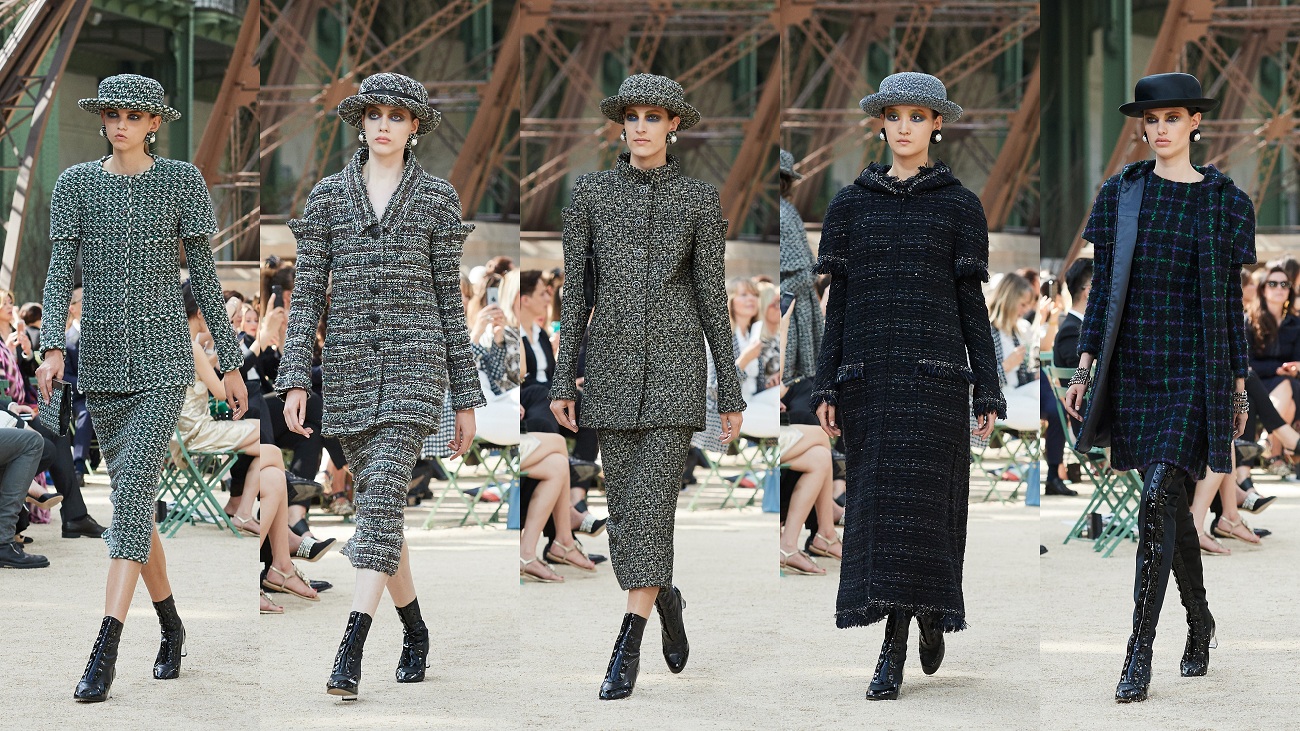 This Tuesday 4th of July 2017, the Eiffel Tower made an appearance beneath the dome of the Grand Palais, and at its foot were Kristen Stewart, the face of Chanel‘s Gabrielle bag and the Gabrielle Chanel fragrance, along with the other muses for Chanel‘s Gabrielle bag, Pharrell Williams, Cara Delevingne and Caroline de Maigret, the Chanel ambassadors Tilda Swinton, Anna Mouglalis, Gaspard Ulliel, Alma Jodorowsky, Zhou Xun and Liu Wen as well as Julianne Moore and Sofia Coppola who all applauded the Chanel Fall-Winter 2017/18 Haute Couture collection. At the end of the second runway show, Karl Lagerfeld was awarded the Grand Vermeil de la Ville de Paris medal by Anne Hidalgo, the Mayor of Paris. This medal, that represents the highest distinction in the City of Paris, rewards his creativity and his impact on the influence of Parisian fashion around the world. 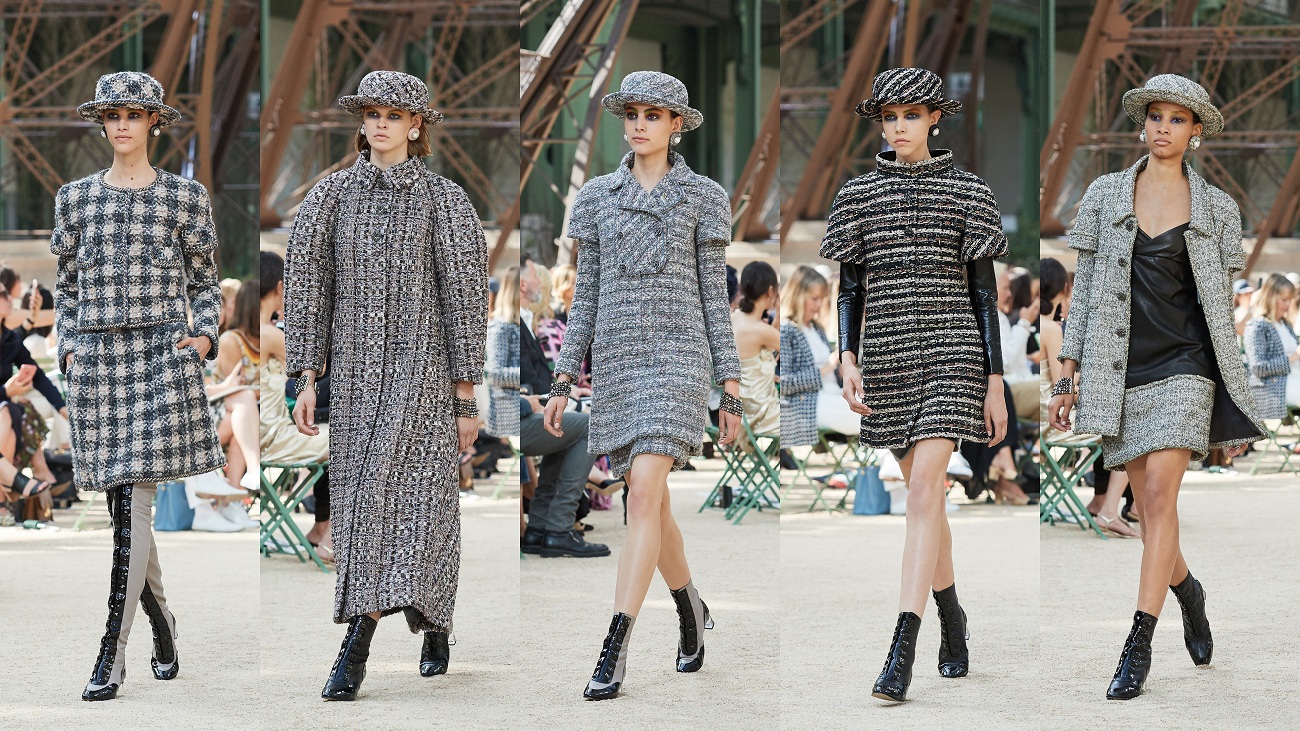 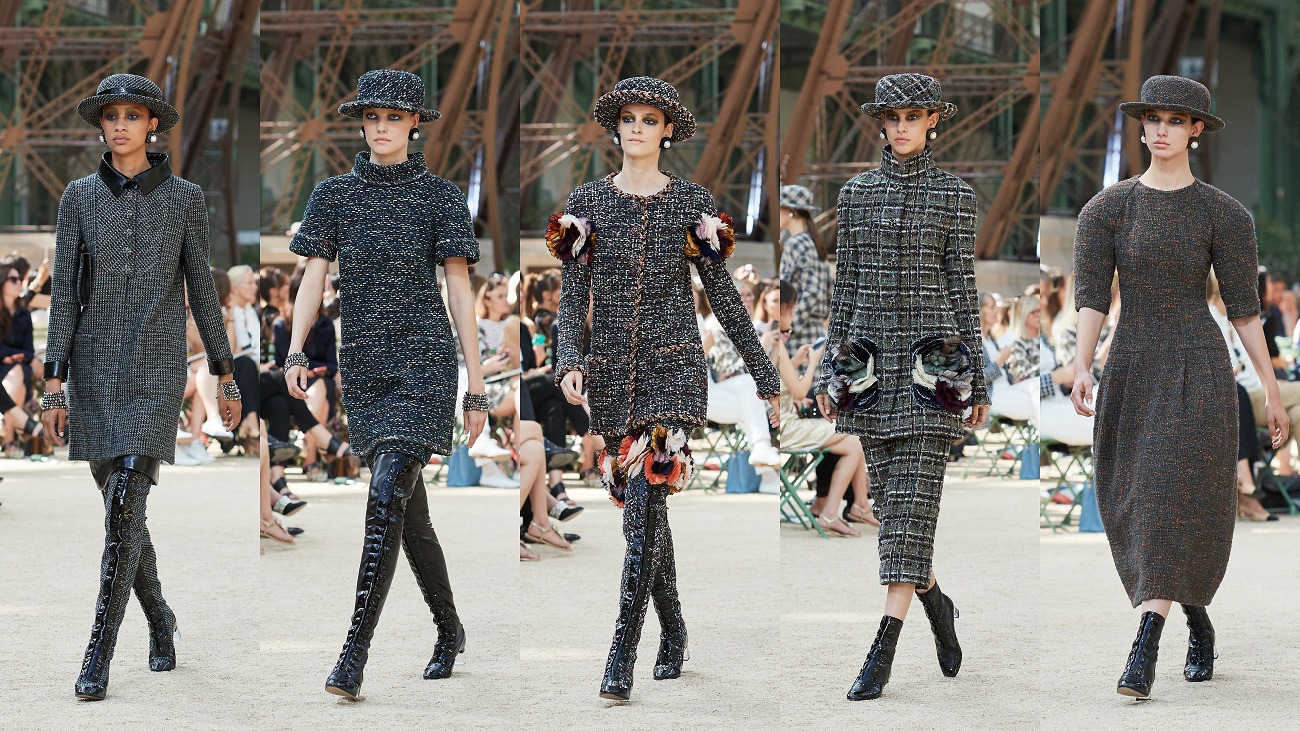 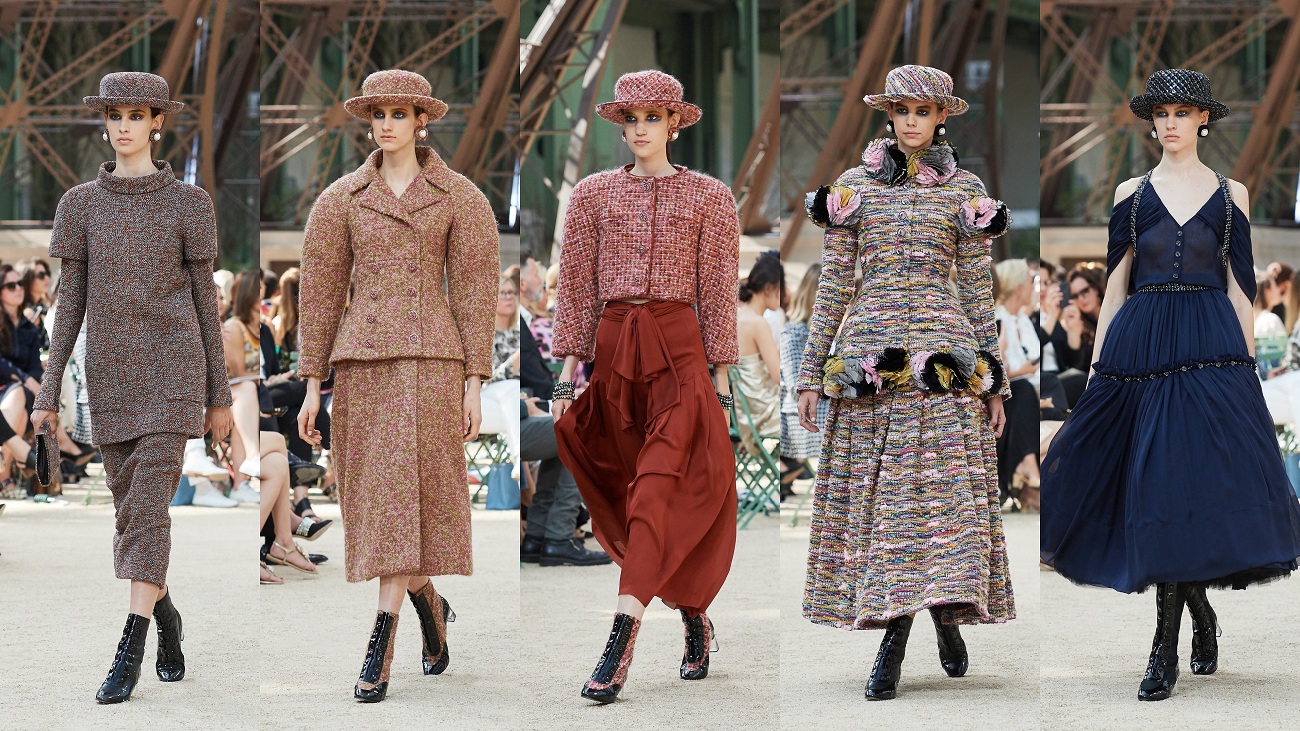 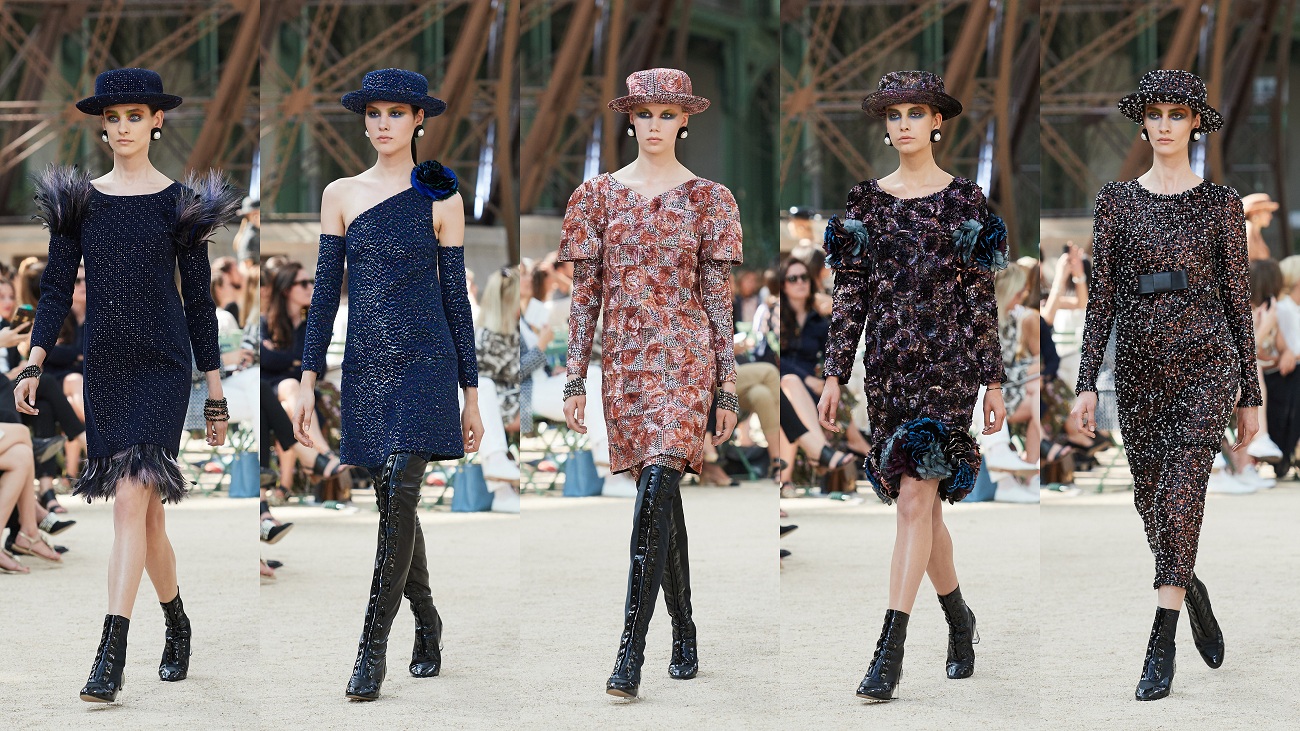 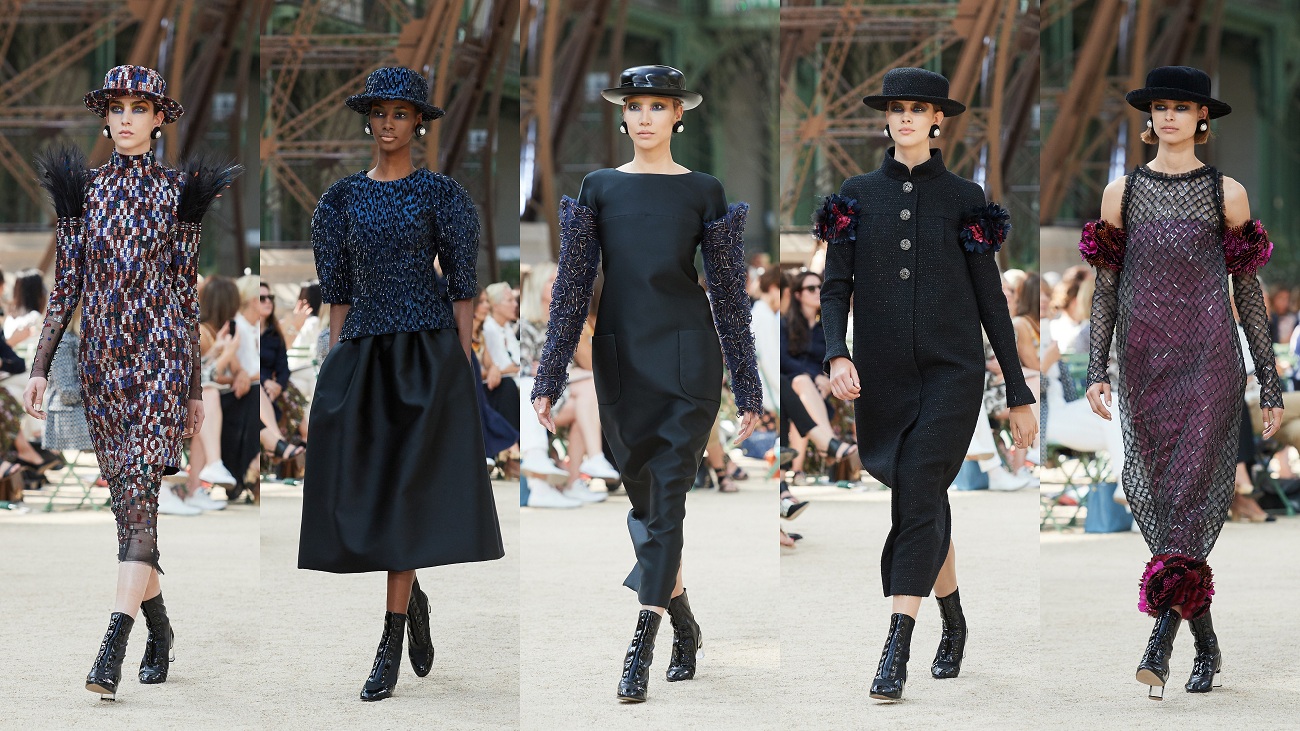 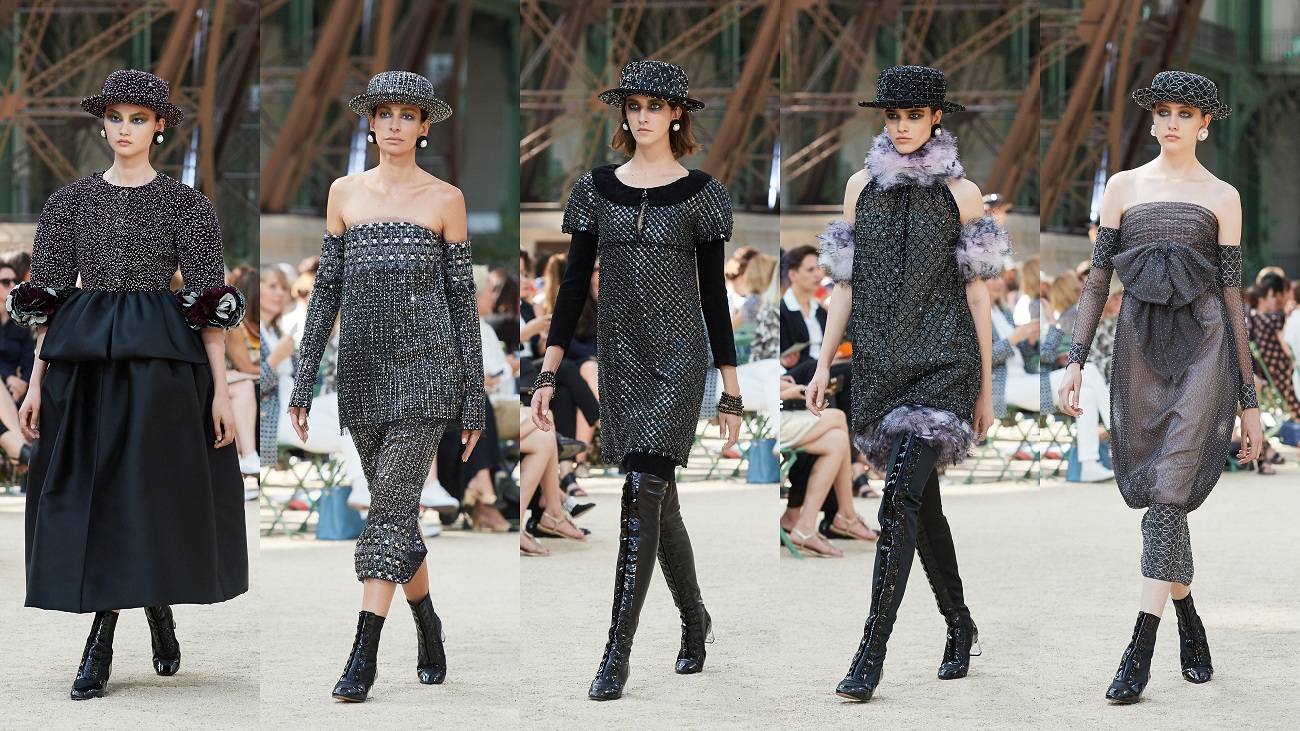 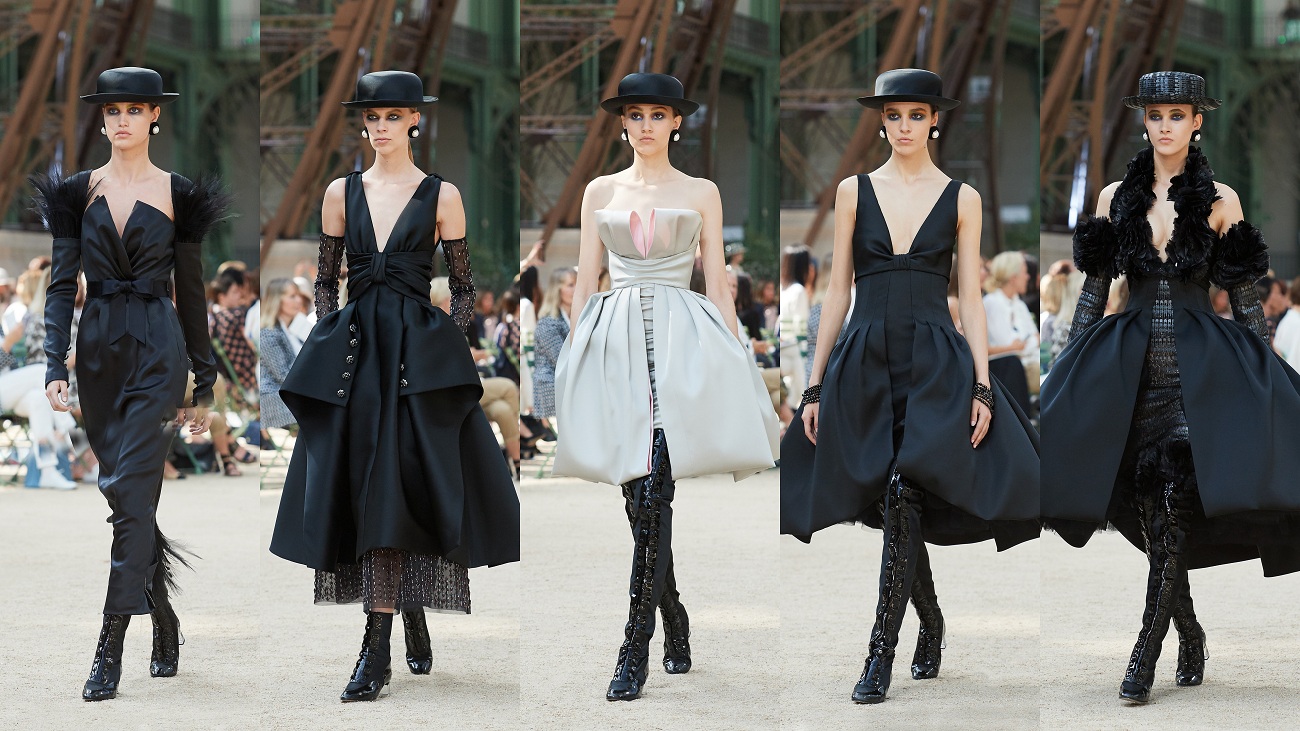 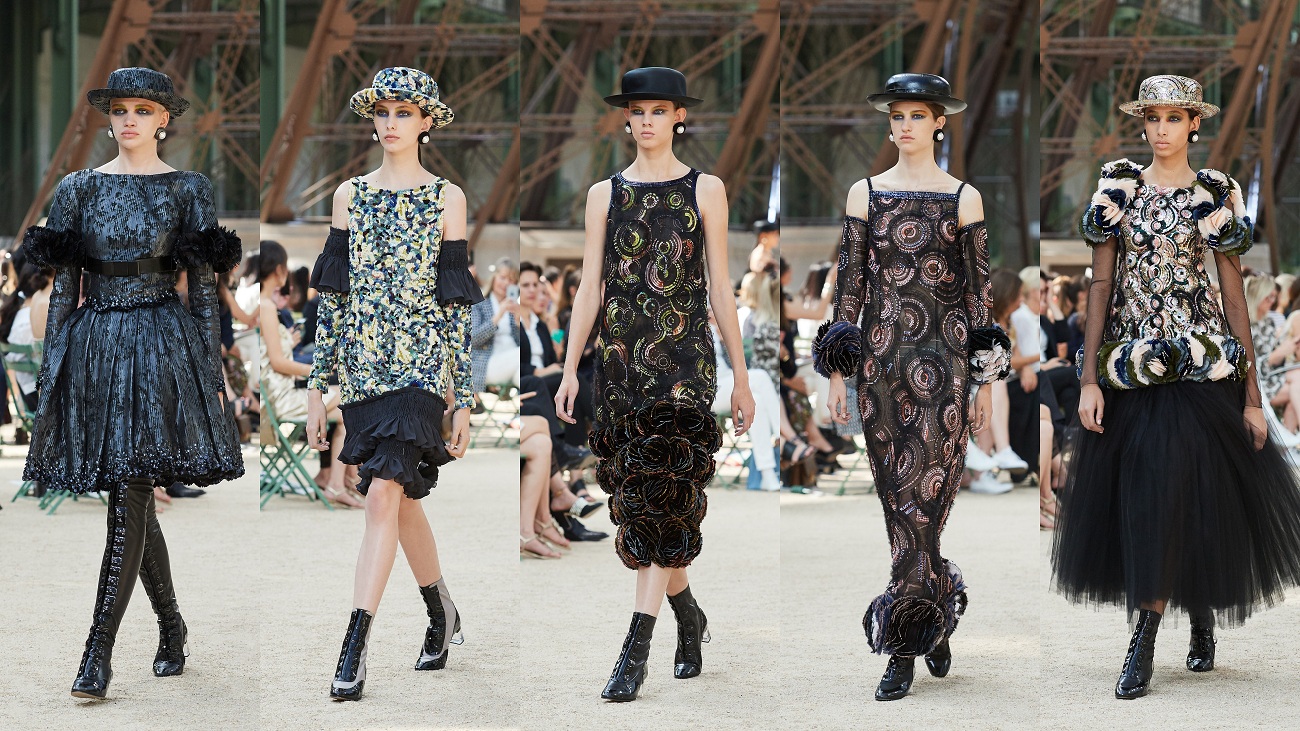 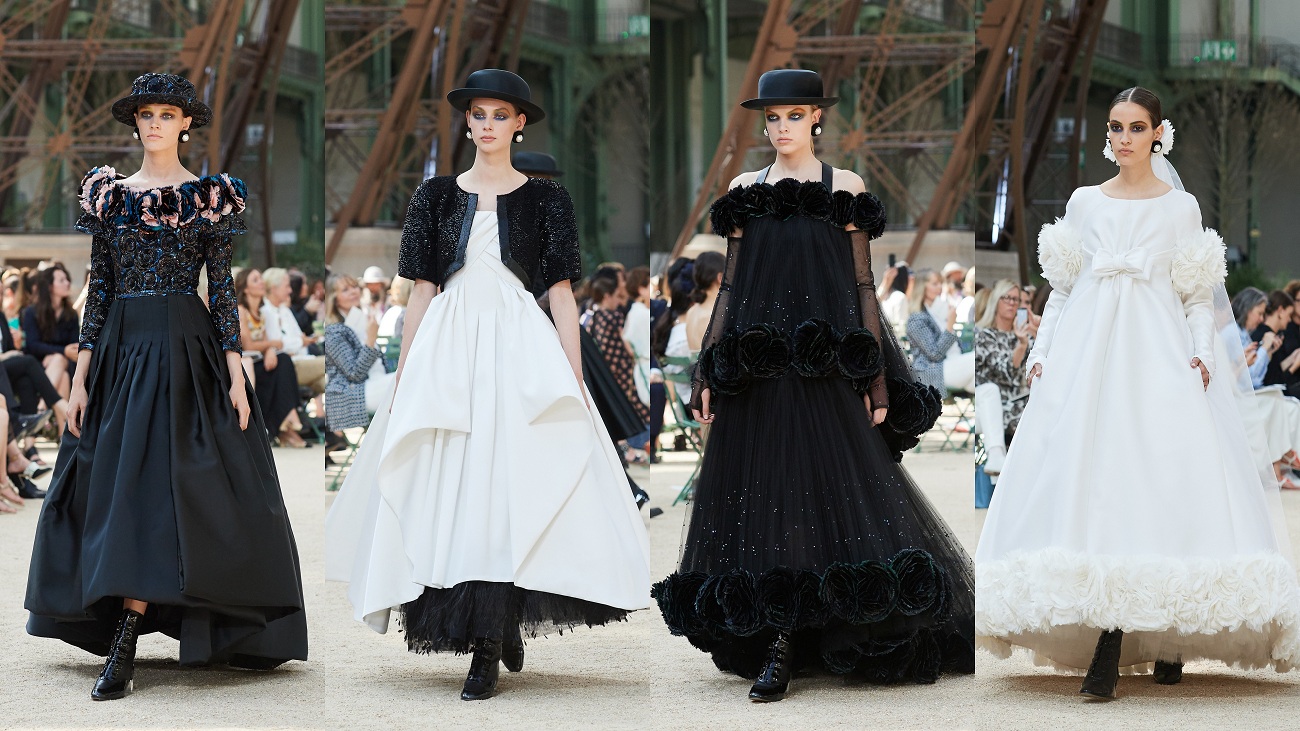