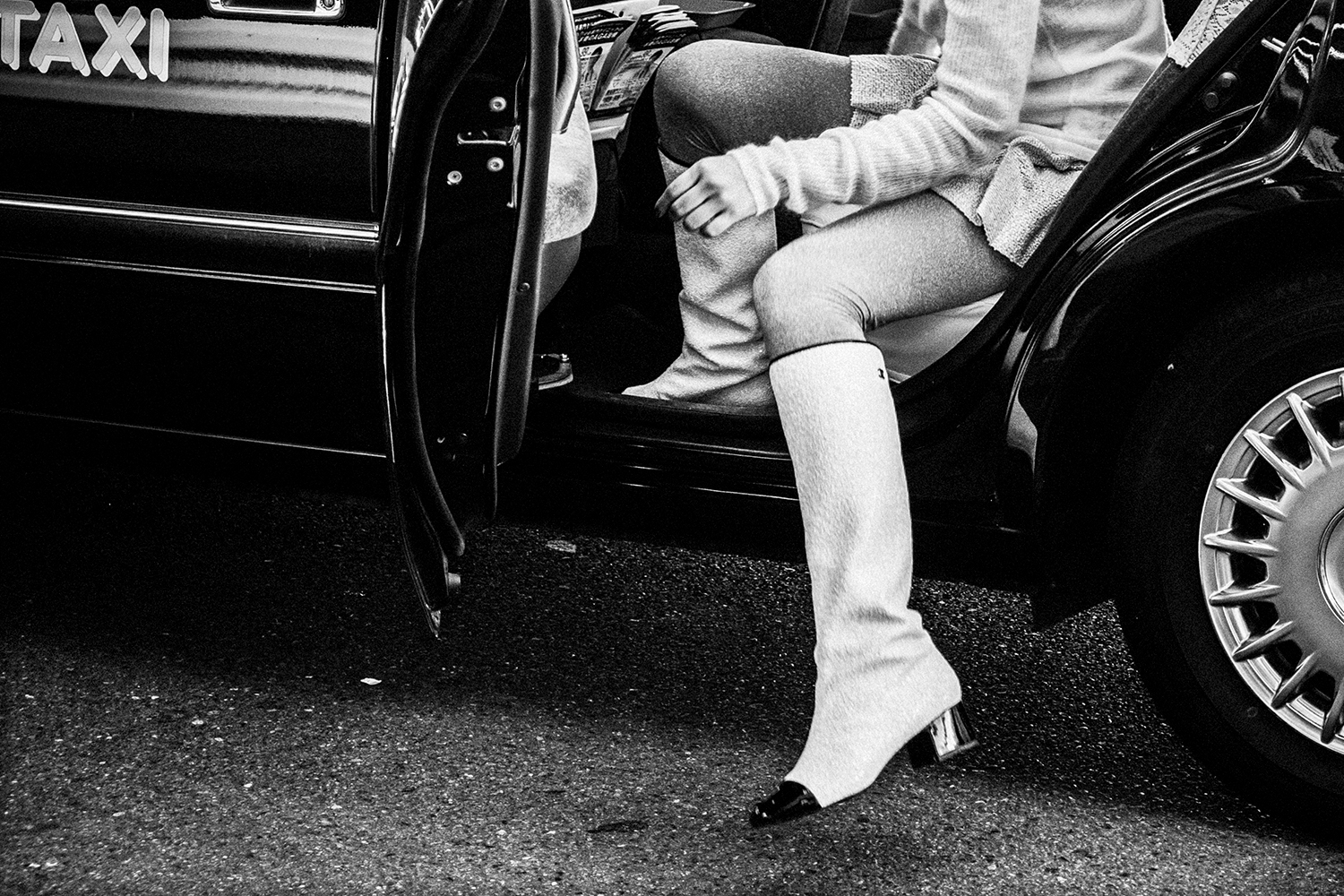 Gabrielle Chanel wanted the two-tone pump to be such that women could say, like her, “With four pair of shoes I can travel around the world.” Thanks to this 1957 creation, Mademoiselle’s silhouette became “the height of elegance”. With a strap across the heel, the slingback pump has become a timeless accessory at Chanel and a classic that Karl Lagerfeld paid tribute to in the Fall-Winter 2015/16 Ready-to-Wear collection. The designer also seized upon the ballerinas, showing them as early as the Spring-Summer 1984 Ready-to-Wear collection, and from then on in dozens of different materials and variations. Since his arrival at Chanel in 1983, Karl Lagerfeld has also regularly featured boots in his collections, drawing on a key element from Gabrielle Chanel’s own wardrobe. For although she never included them in her collections, she herself wore them in all circumstances. 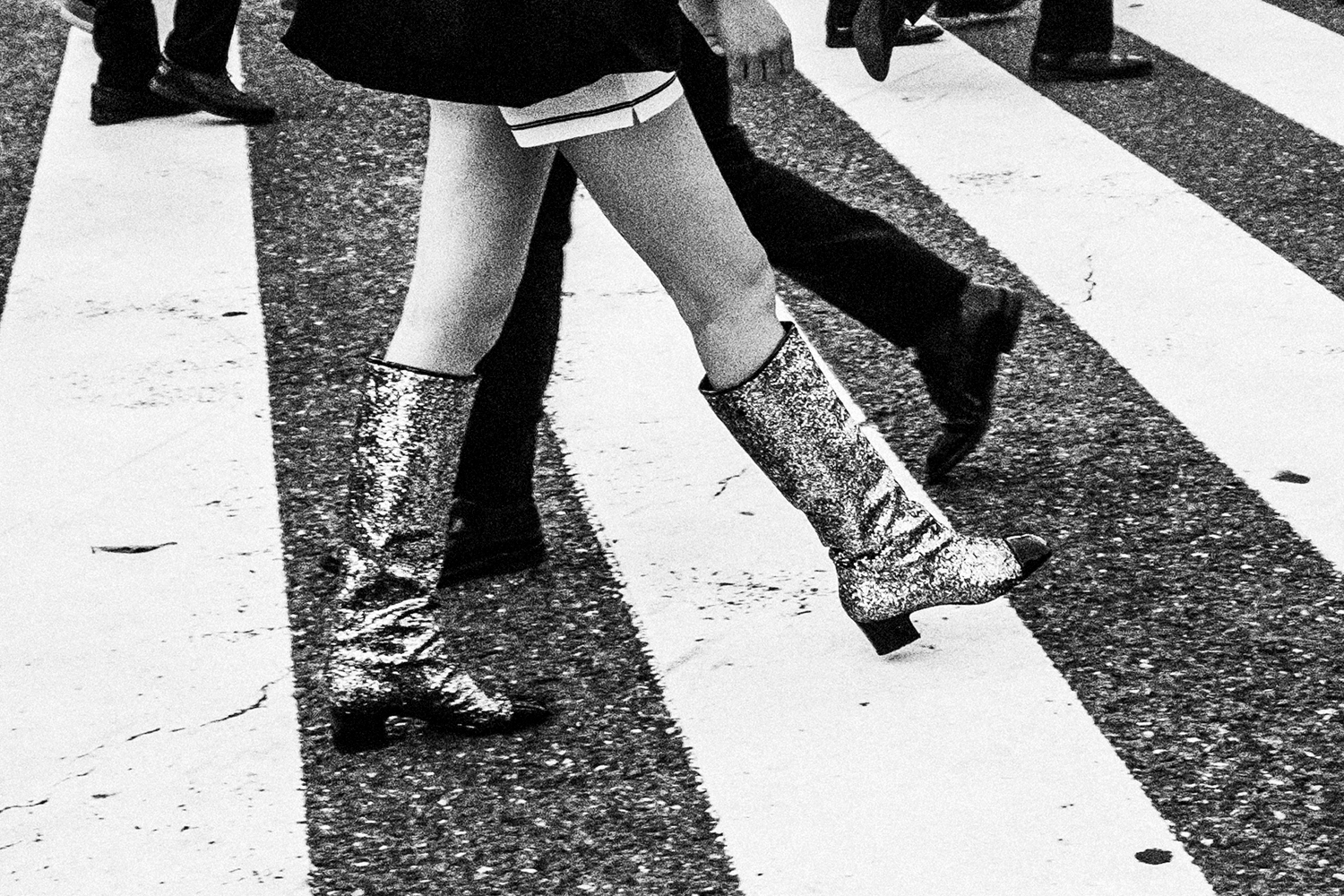 And what could be more logical for the lover of horses, accomplished rider and racecourse enthusiastic that she was? In the 1920s at Eaton Hall, the home of the Duke of Westminster, she would wear boots to stroll around the castle grounds and when she rode there. From then on Mademoiselle would make them her companions in the countryside as much as in the city. From 1958 she would wear her tweed suits with boots and she enjoyed seeing her favorite model, Marie-Hélène Arnaud sporting them too. In 1966 Women’s Wear Daily discussed her ‘motorcycle boots’, produced by Massaro, who in order to give them more flexibility, cut them from a felt that was exclusively blue, almost black, or sometimes white and blue. “My ankles swell a little and with these boots, you can’t see a thing! One day we’ll do them for the collection,” Gabrielle Chanel confided to Raymond Massaro. 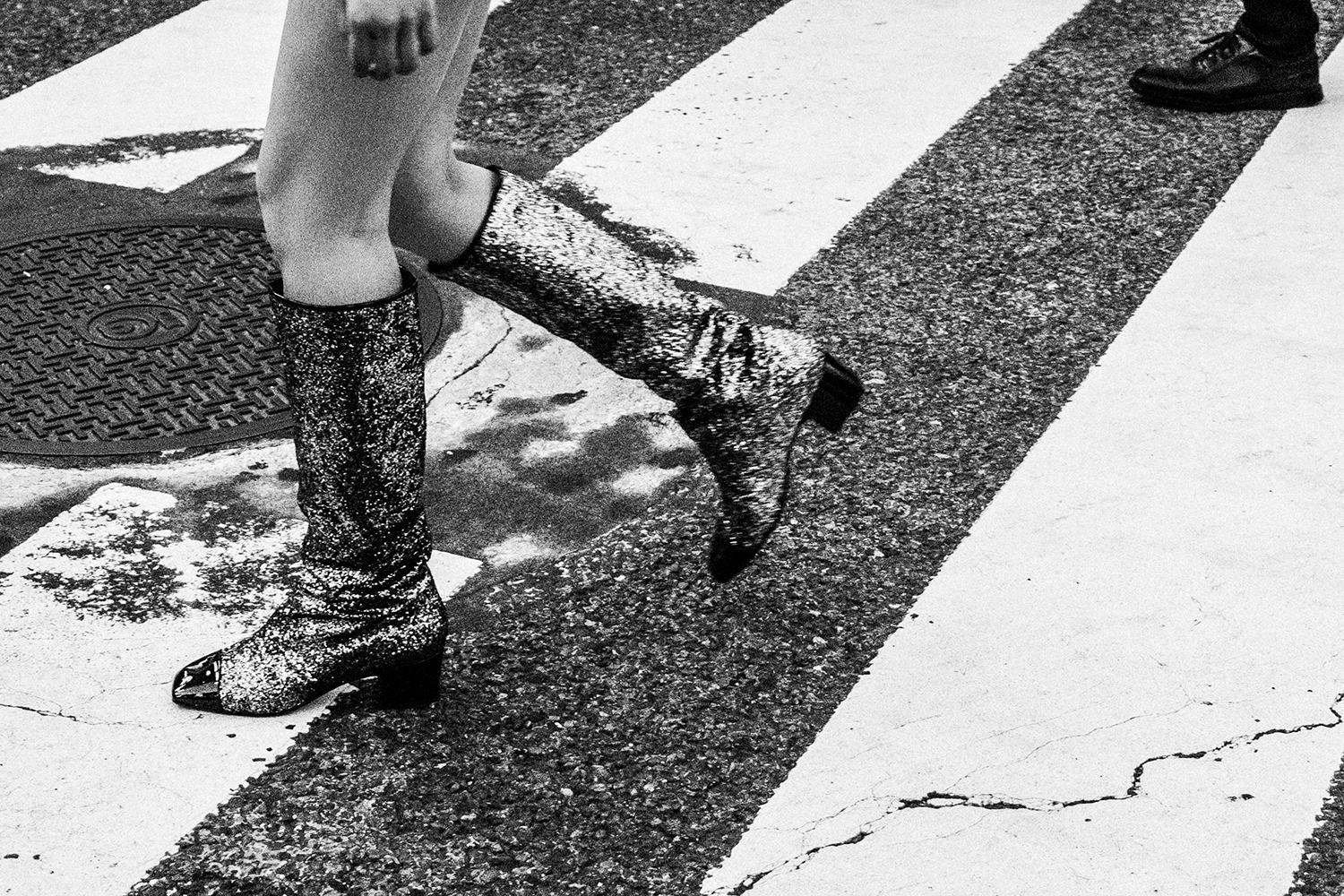 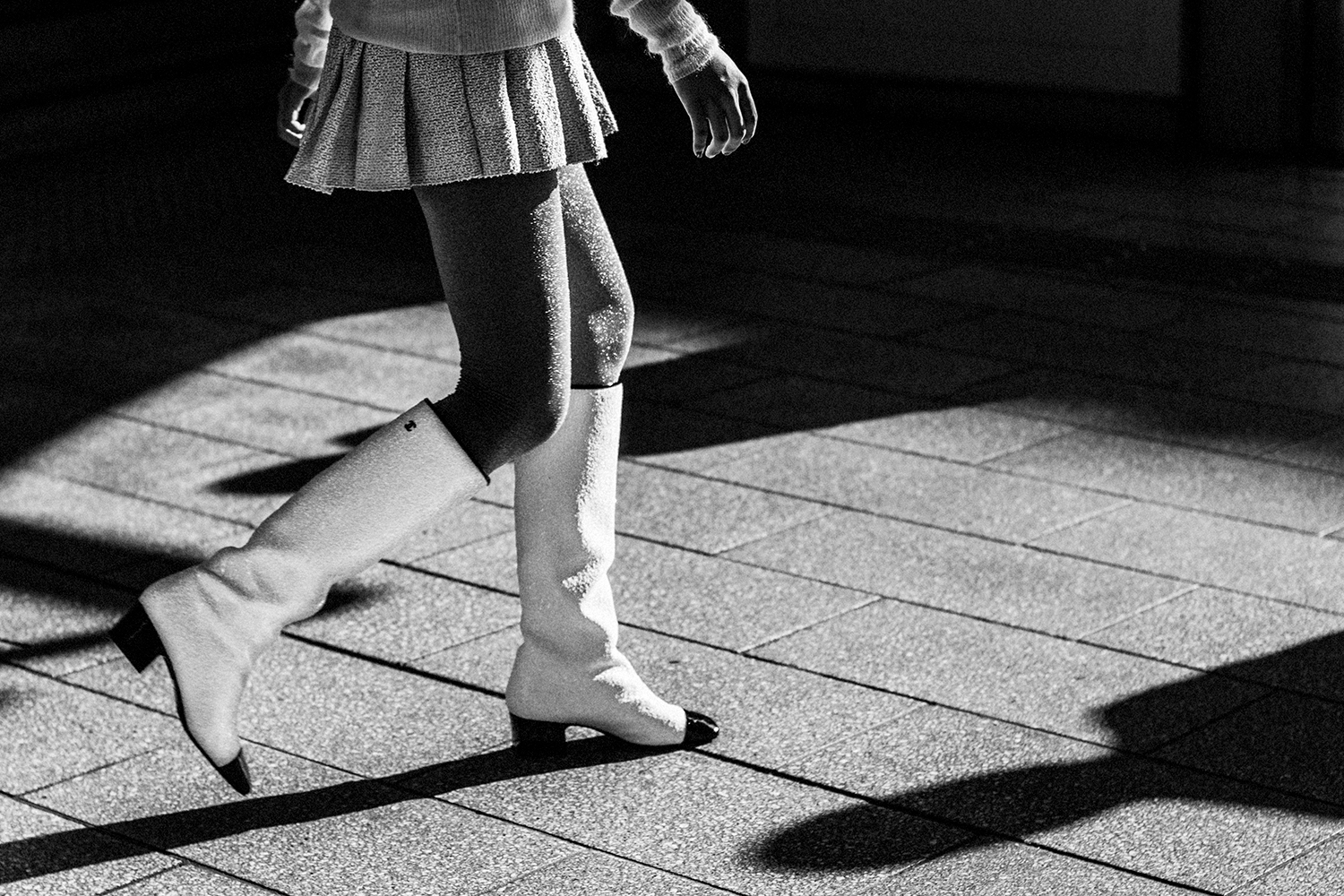 For the Fall-Winter 2017/18 pre-collection, the Chanel boot adopts an urban look. Two-tone, ultra-chic, it steps out in suede and satin. Elegant and comfortable, it stops prudently at mid-calf. At this point the signature Gabrielle Chanel, subtitled Coco appears engraved in the skin. A sophistication emphasized by the color duos: the satin toe cap, always black, is accompanied by a suede calfskin in beige, teal, burgundy, midnight or royal blue, aubergine, deep or brick red and grey. Just one exception punctuates the line as a monochrome black version.

Karl Lagerfeld pursues the metamorphosis of the Chanel boot with the Fall-Winter 2017/18 Ready-to-Wear collection. It is ready to conquer outer space on a low, slightly bevelled square heel. Its squared toe cap is swathed in patent leather or Lurex while its sparkling fabric shimmers like a constellation of diamonds in the Chanel galaxy. Whether understated or elaborate, the Chanel boot carries within it all the precision of a line as well as a timeless allure. 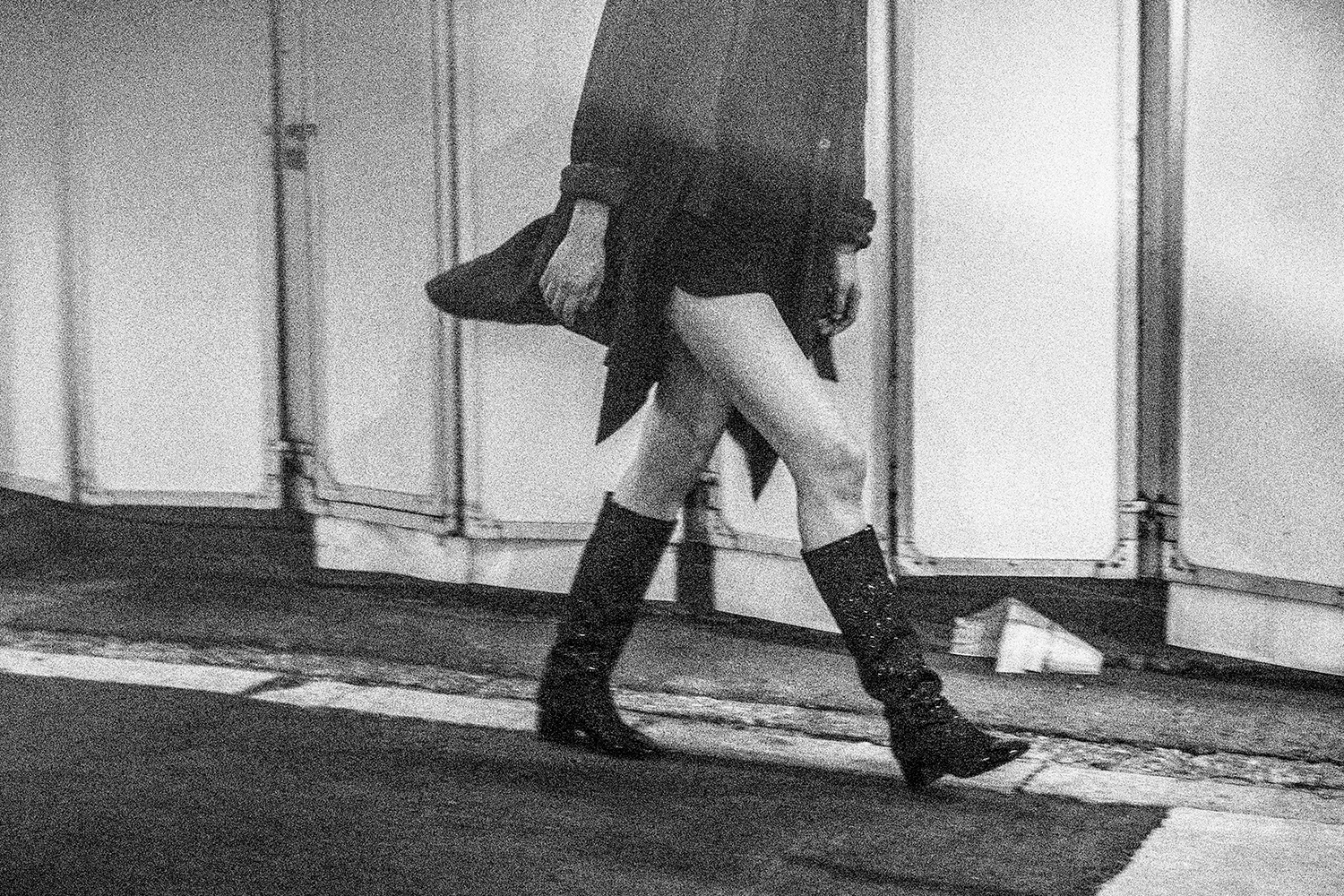