A pastel sky at dusk reflected in the outline of a pale blue sea makes up the décor composed by Karl Lagerfeld as the setting for the Chanel 2017/18 Cruise Collection campaign, La Modernité de l’Antiquité (The Modernity of Antiquity). 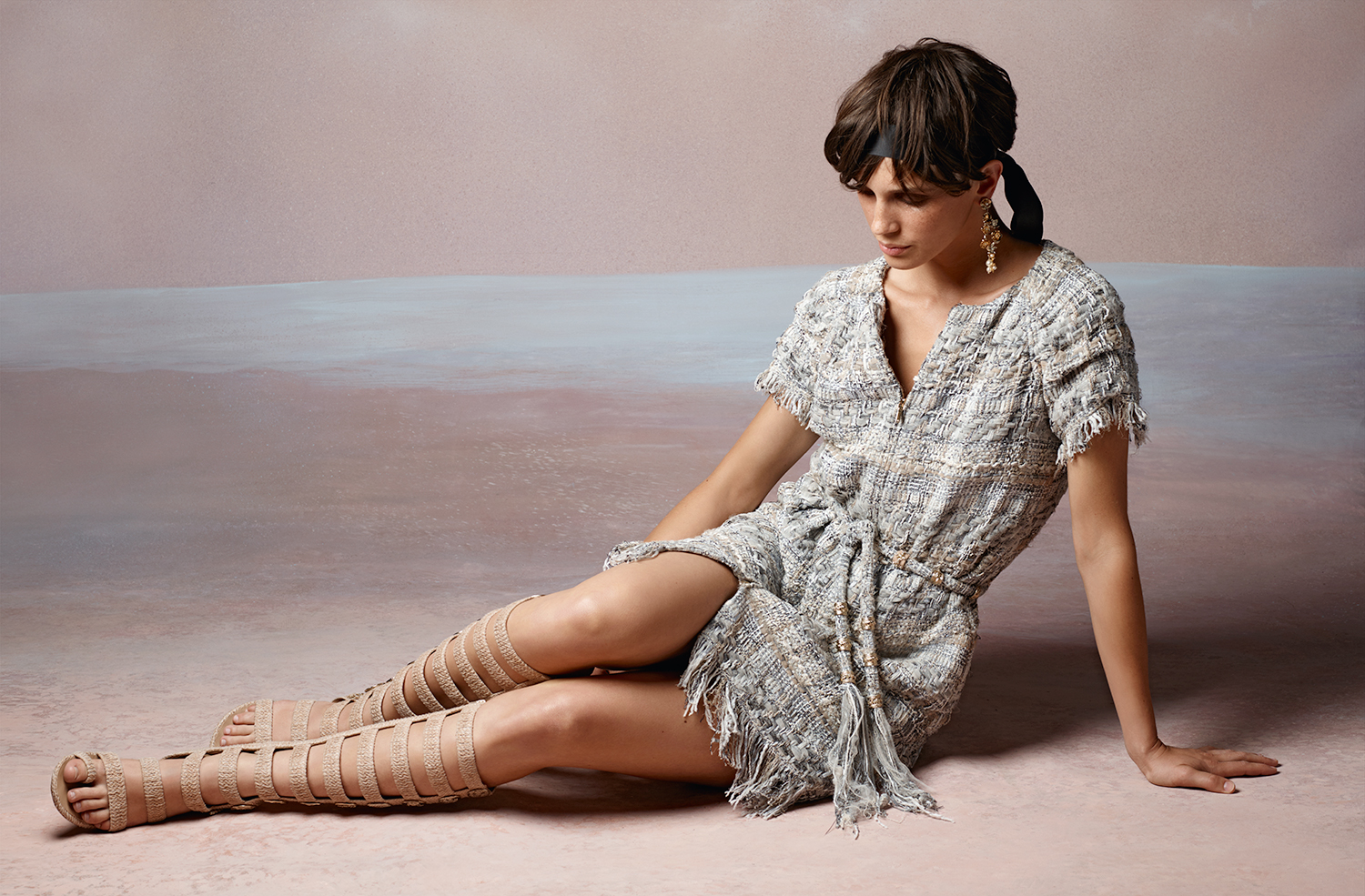 This season the designer has chosen French actress Marine Vacth as his muse. First seen in the film My Piece of the Pie by director Cédric Klapisch, she was awarded the ‘Essence du Talent’ prize at the French Film Festival in Florence in 2013 for her role in Young and Beautiful and she was nominated the following year at the César Awards in the category for Most Promising Actress. In 2015 she played a role in “Families” directed by Jean-Paul Rappeneau and won the SACD Prize and in 2016 she won the award for Best actress at the Sarlat Film Festival for her role in Nicolas Boukhrief’s film “The Confession” starring alongside Romain Duris. This year the actress was present at the Cannes Film Festival for the screening of François Ozon’s new film The Double Lover. 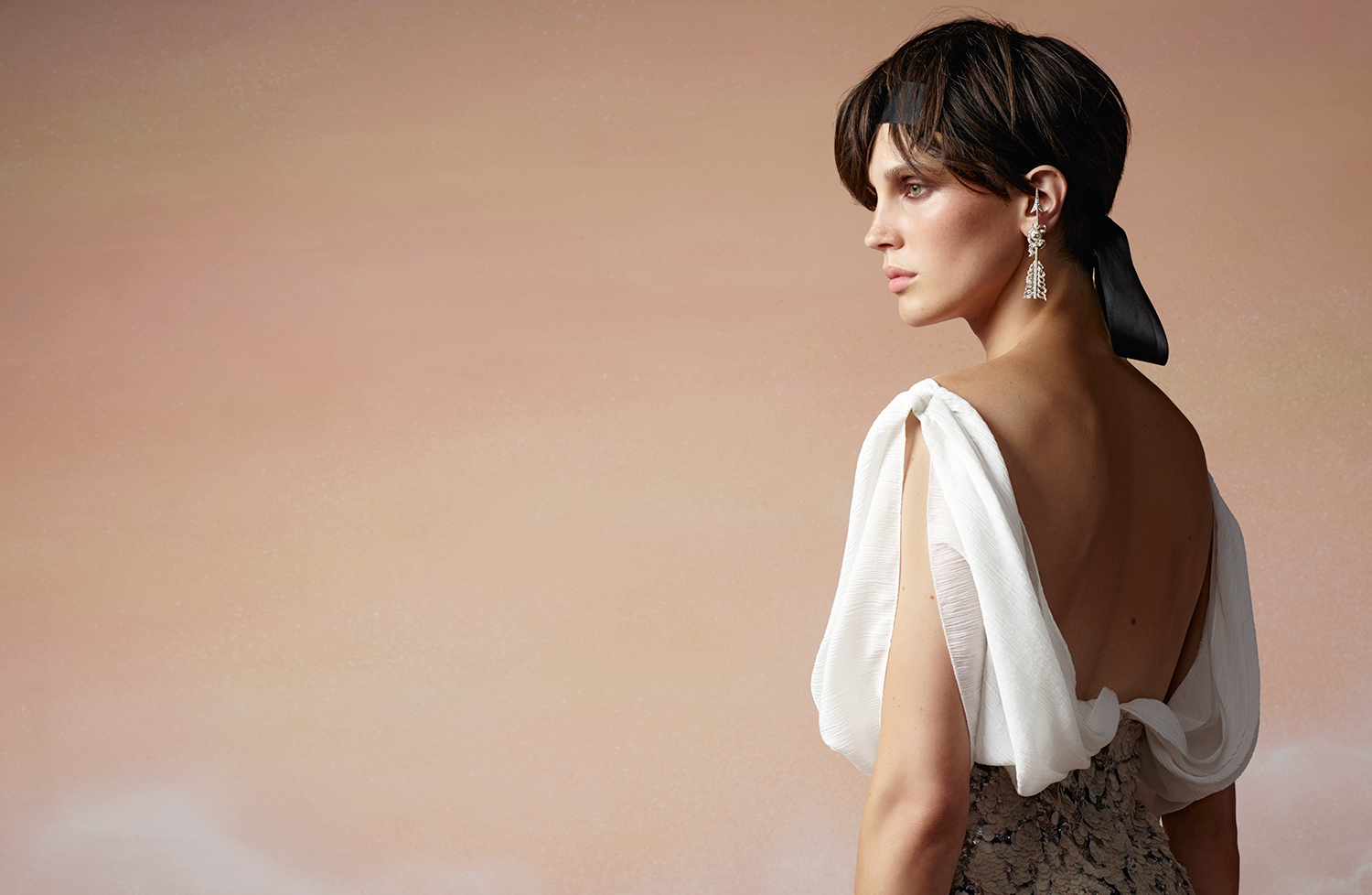 Against this backdrop that transcends time, imbued with a gentle serenity, Marine Vacth slips into shepherdess dresses made from tweed in tones of ochre and stone. Zipped or crossed-over, they are fastened by a simple tweed cord tied with metal rings. The actress appears goddess-like in a sculptural dress in immaculate crepe with a wide waistband embroidered entirely from sequins to echo the aspect of marble. The fluting of columns melts into a jumpsuit in silk jersey and a pleated minaudière in gold leather. Crowns of gold leaves mix with double C’s over a dress and a robe in printed jersey. 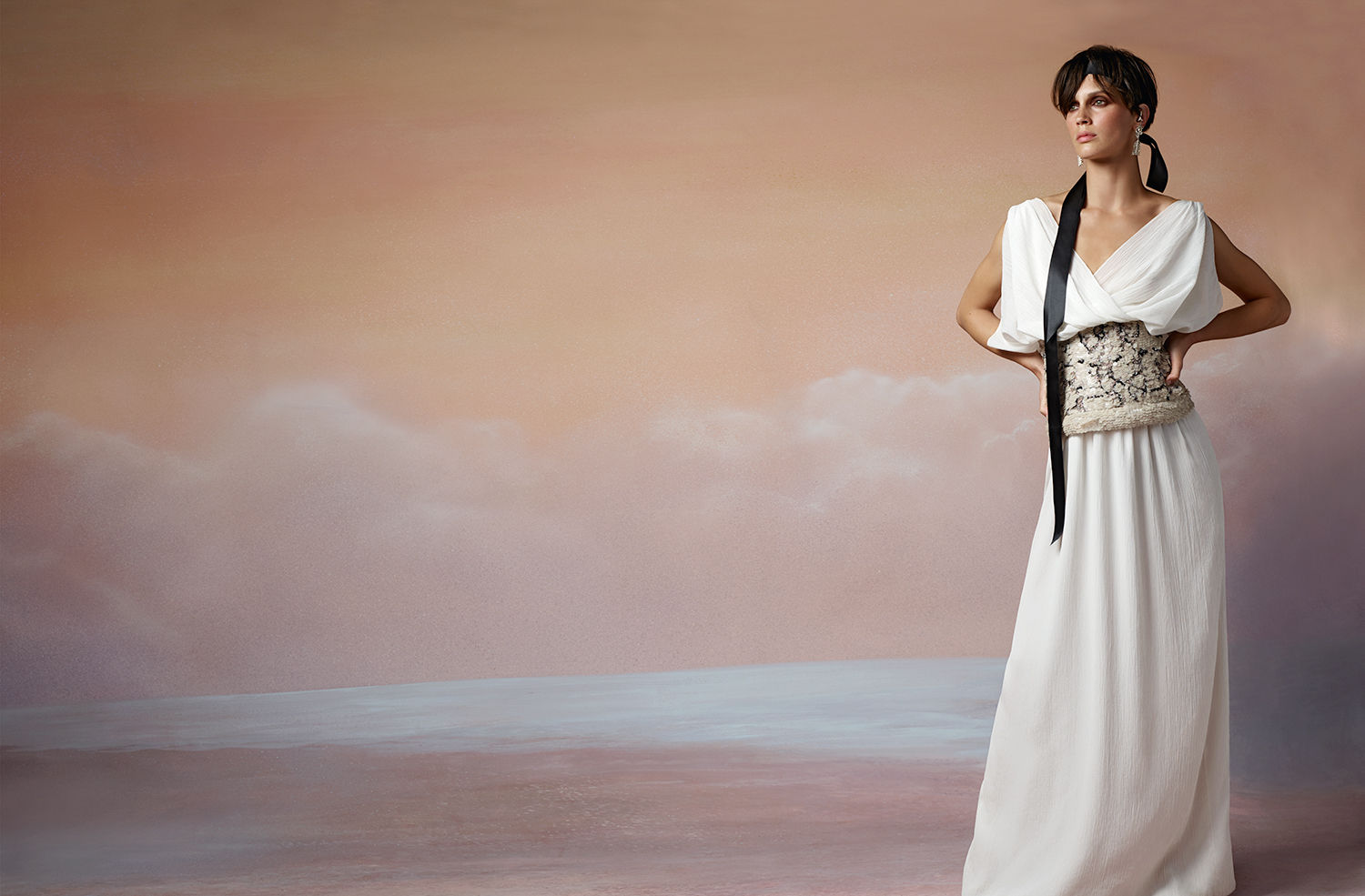 Recalling the richness of a culture and a history, sautoirs embellished with glass beads and ancient symbols adorn the neck, belts are garlands of flowers in gold leather while arm cuffs take on a new modernity in quilted metal. Marine Vacth has the beauty of a Greek heroine whose face and features are sublimated with drop earrings in the shape of arrows, adorned with flowers or Athena’s owl. Her hair is held back by jewelled headbands or simple ribbons, her legs are swathed in the leather or tweed of gladiator sandals. 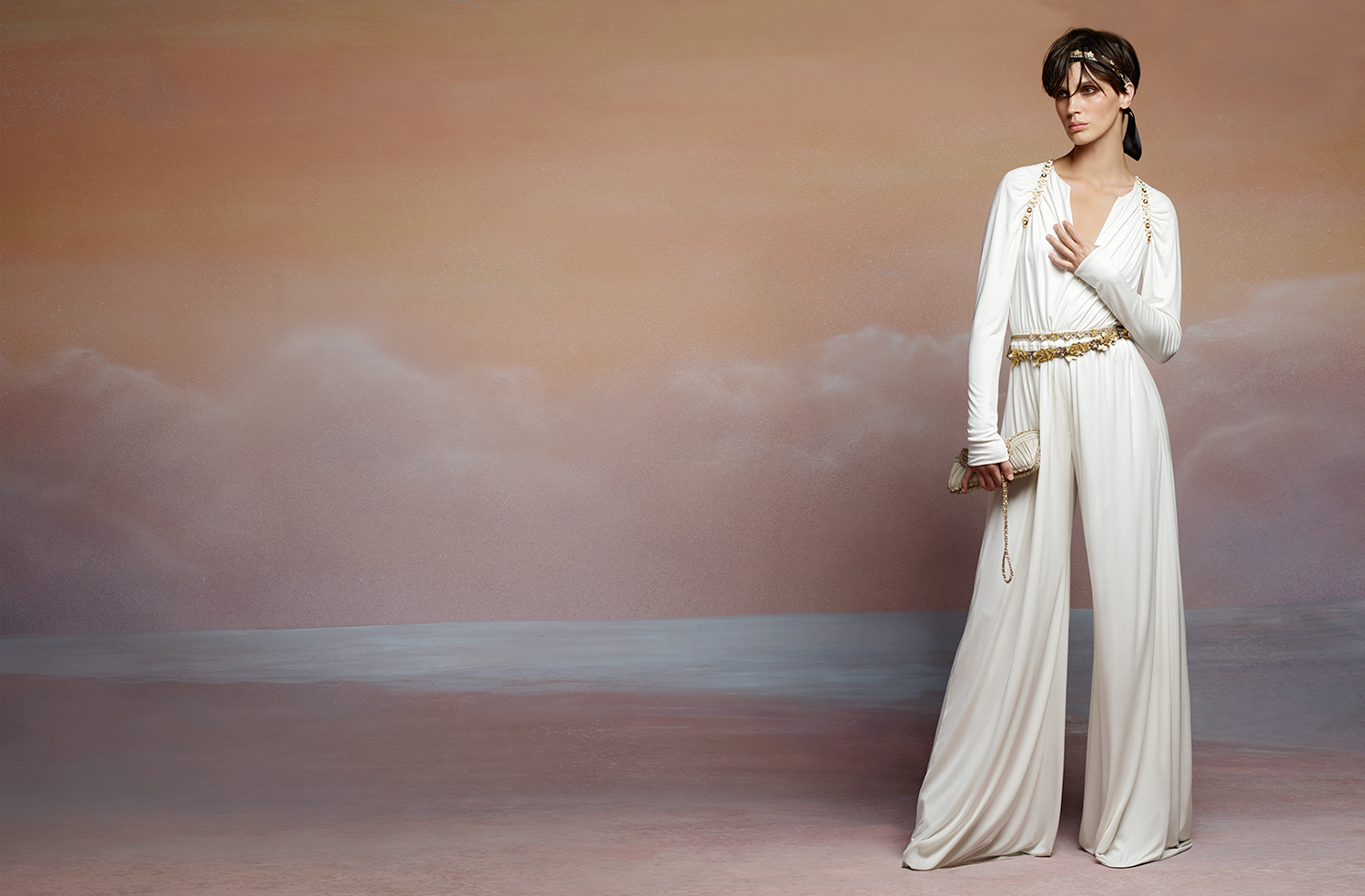 An admirer of the ancient world, Karl Lagerfeld conveys with Marine Vacth his vision of the ideal Greece whose silhouette and elegance of fluid lines are in perfect harmony with the spirit and the look of Chanel. 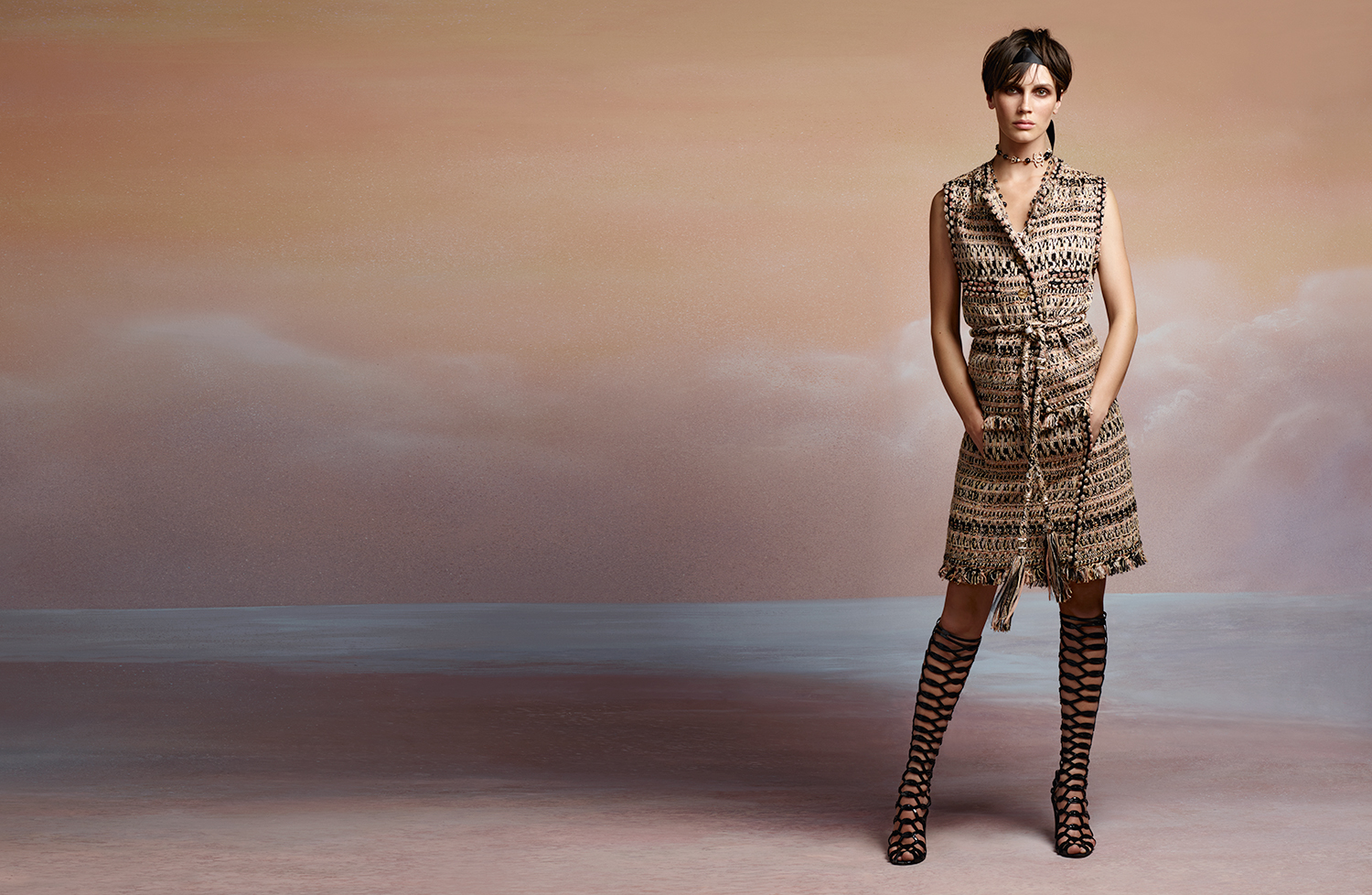 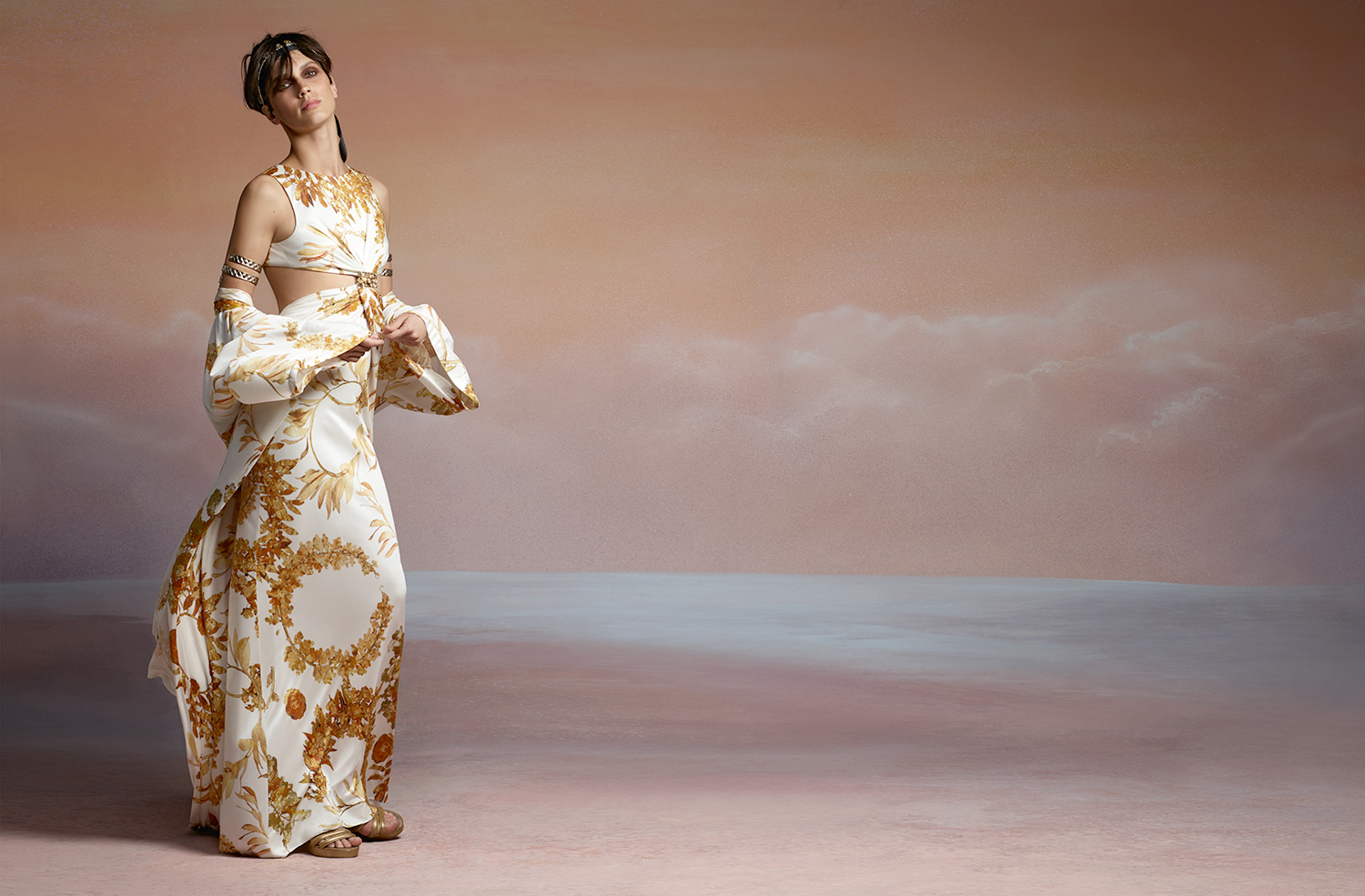