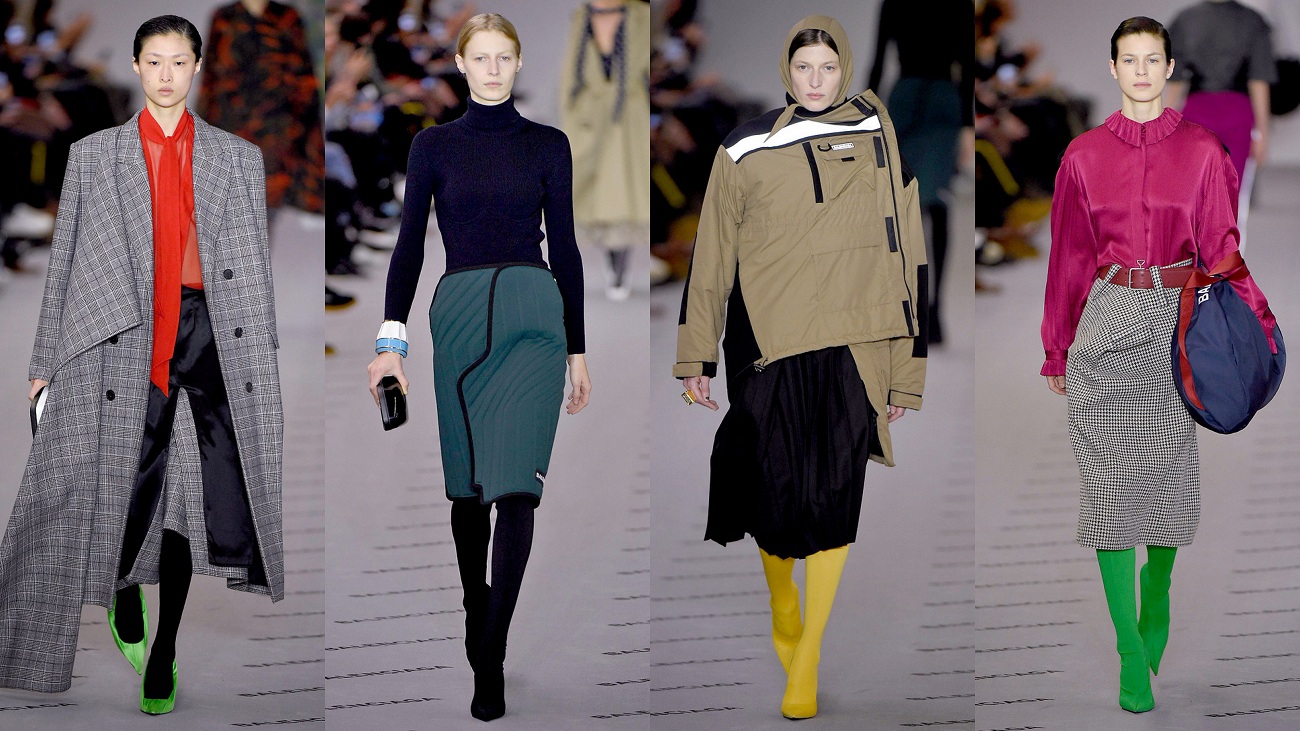 For 100th anniversary of the House of Balenciaga, Creative Director Demna Gvasalia took the basic elements from the unseen archives of Cristóbal Balenciaga’s couture collections and reworked them in quite a bold manner. He returned to Cristóbal’s silhouettes with outpourings of modern colors, volumes and prints, which took the entire collection one step forward.

Gvasalia continued to decipher a calligraphic structure of the Balenciaga handwriting. Opera coats, trapeze frocks and bubble skirts with street-wear note were infused with Vetements-inspired fragments. Trench coats made in leather were paired with chunky platforms, thigh-high boots and stirrup-leg trousers, which is one more trend on the way to become more established. 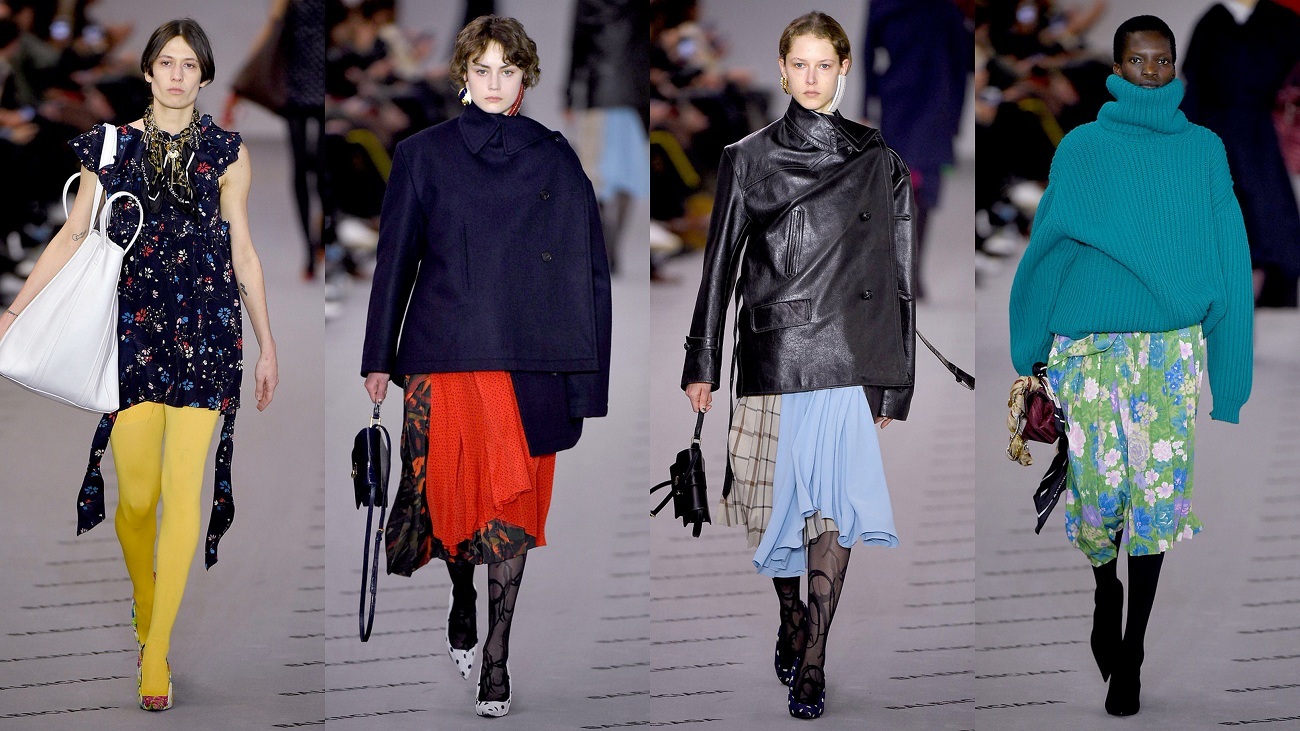 Made-to-order dresses which can be pre-ordered are either branded with the original house logo, or evidently labelled on the back with the year, garment description and collection. Also, as a practical gesture, pockets were added to some of the founder’s haute creations— a black-and-white polka-dot dress from 1964, fuchsia triple-decker triangle pouf- reference to Spring 1958, black-and-white balloon dress reference to similar one from 1958. We also recognized a take on a baby doll dress from 1958 and on a beautiful feather dress from 1966. Another noticeable Balenciaga‘s signature can be seen in floral patterns sewn into dresses and patchwork. And, the lavish drape of this collection stayed so very true to the original spirit of the house. Several pieces of the extravagant couture fabrics were carried to the matching editions of Bazar bags.

Gvasalia formed the collection around American-inspired political messages, following the footsteps of many other fellow designers from this season’s Fashion Weeks. For example, American politician Bernie Sanders’ campaign logos were put on two pairs of pumps, and it wasn’t the first time Gvasalia used Sanders-inspired notes. They were also used in designer’s men’s Fall 2017 collection, but inevitably those political notes were more intriguing in women’s collection. 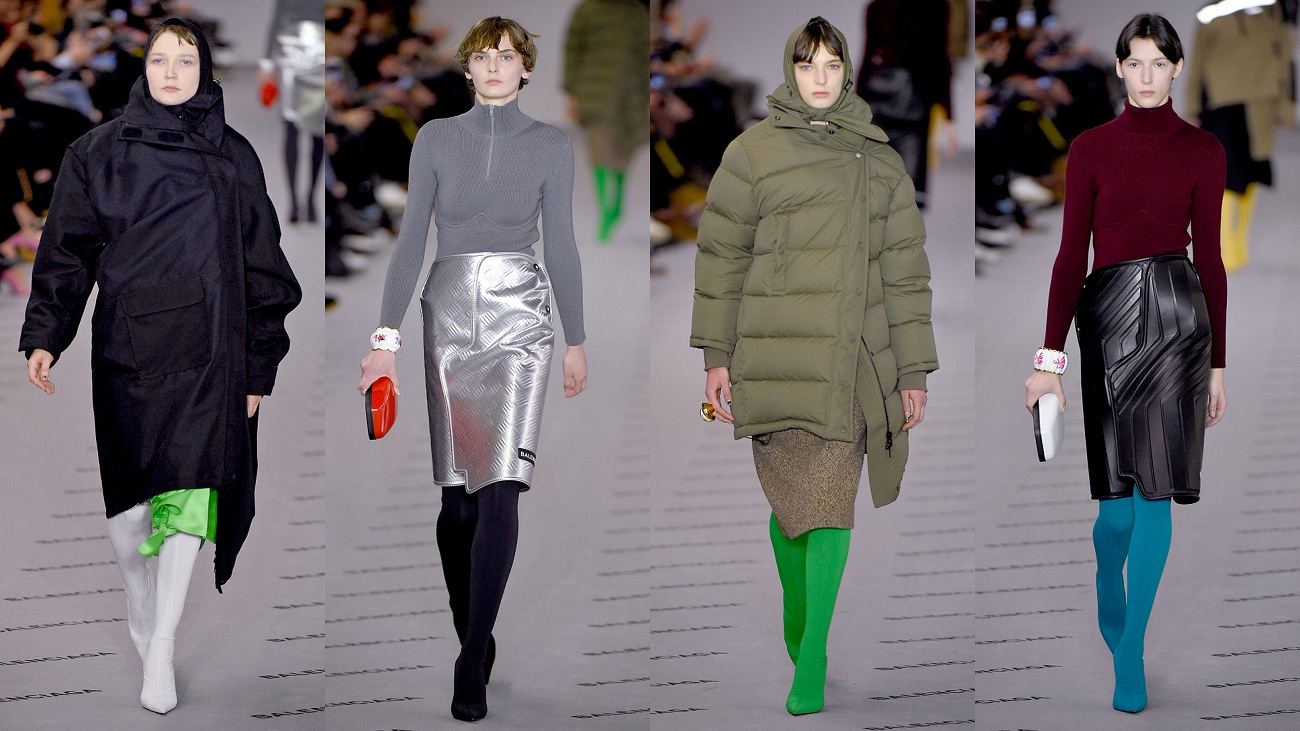 The collection itself was extremely interesting for three key reasons. First, Gvasalia kept his interest with the oversized, dramatic figures, constructing everything from the gowns, dresses and coats in the most theatrical way. Strikingly broad shoulders were clearly a revision of the 80’s men’s collection, which gave us the ultimate dream selection of asymmetrical trench coats, bomber jackets (yes, they are here to stay!), anoraks and cozy sweaters that will be huge when it comes to street fashion. Second, he continued to reinvent his infamous color-blocking motifs but with more refined and elegant patterns and neon stockings, which were warmly winter-approved at the start of the show, and more spring inspired near its end. Finally, Gvasalia remains interested in re-purposing as an idea, his car mat skirts in leather and neoprene will be must haves. 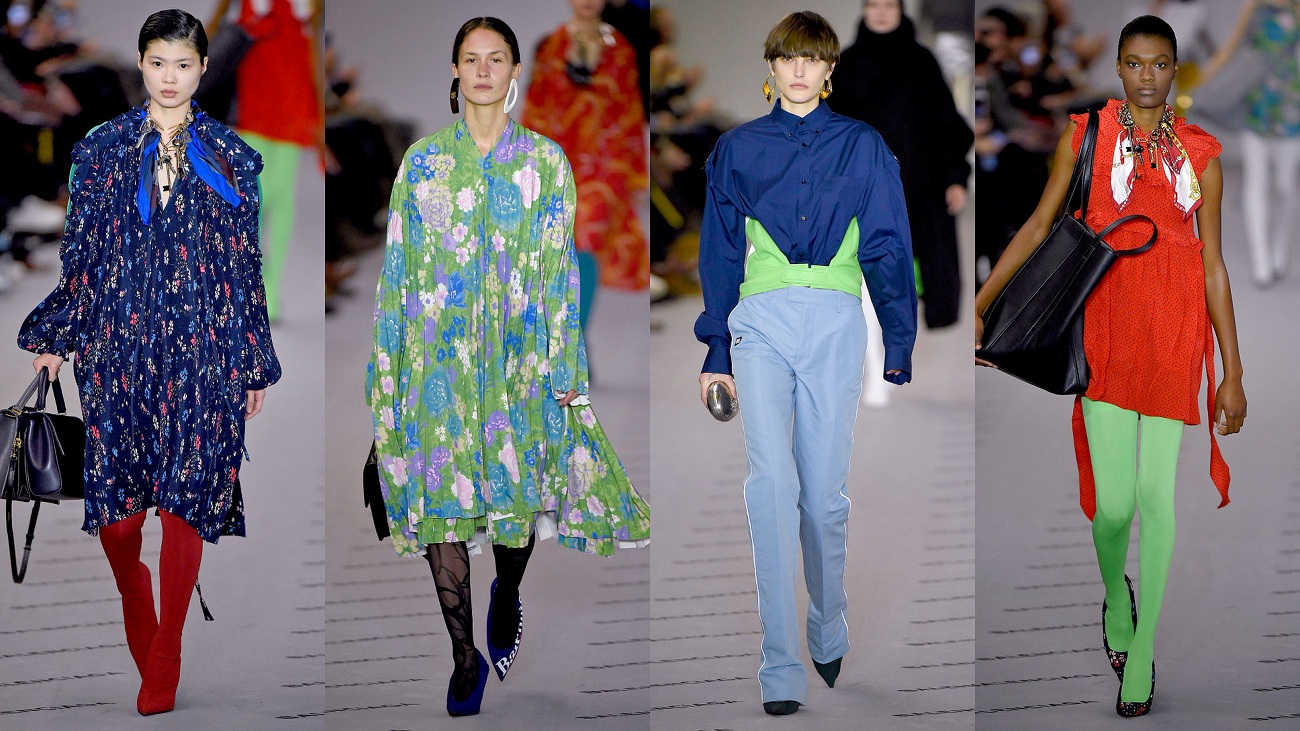 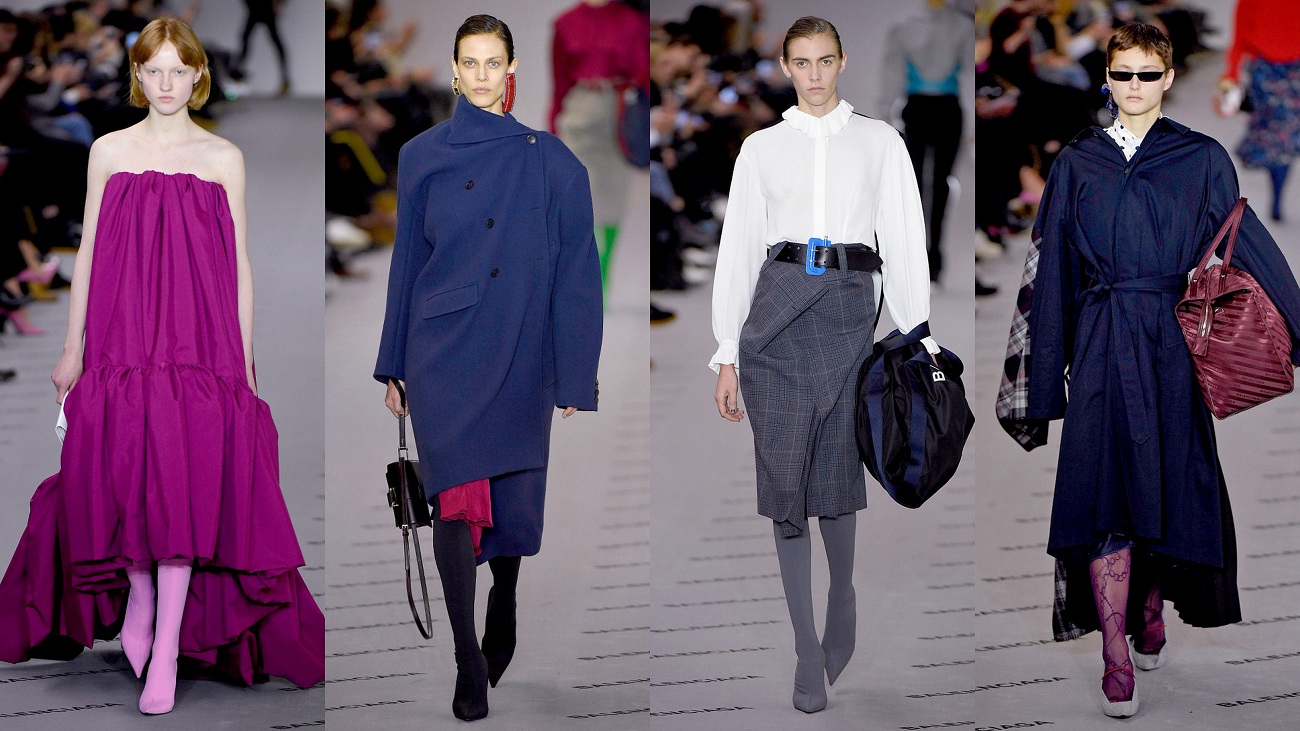 “It’s part of my creative process to analyze things and question them,” Gvasalia said. That train of thought has transformed fashion’s silhouette, and here, it was so lengthened by the Spandex boot- pants that ran from toe to waist that you were almost afraid the models would snap as being made out of rubber. 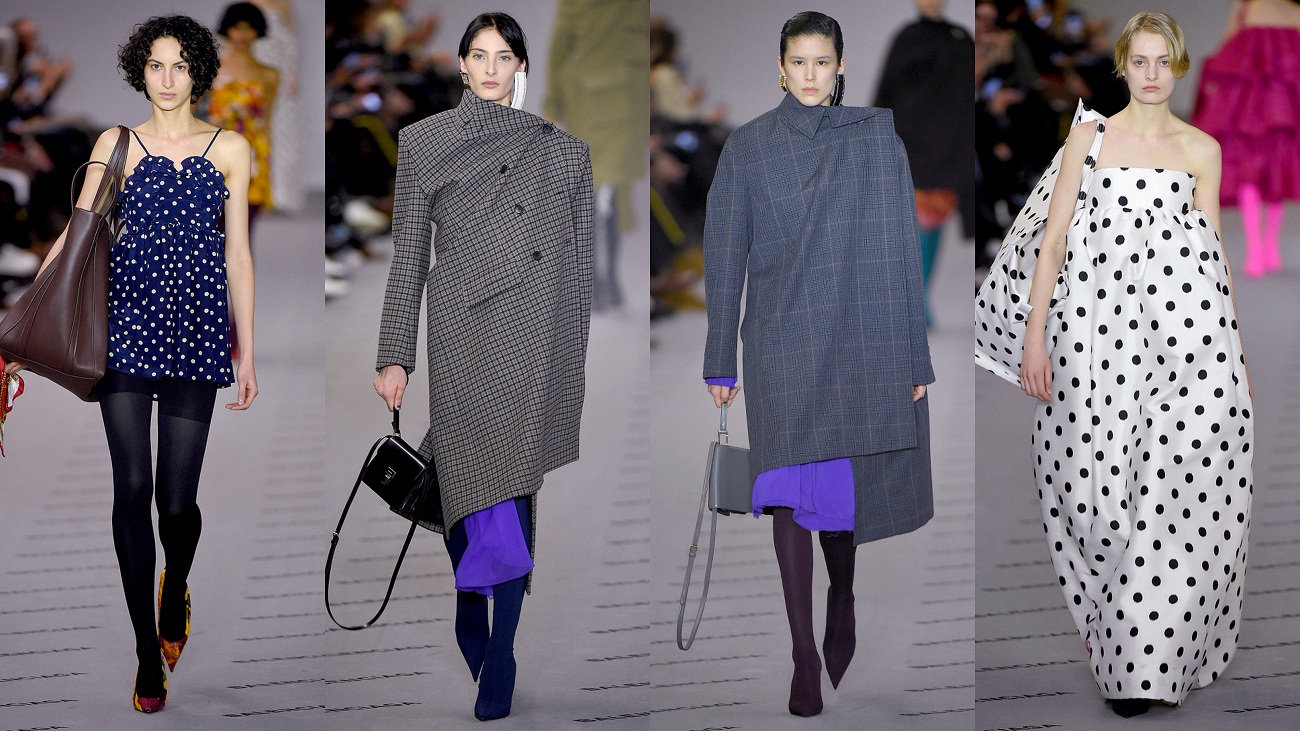 At the end, with this provoking and magnificent collection, Demna Gvasalia gave us a lot to think about while anticipating the next show. 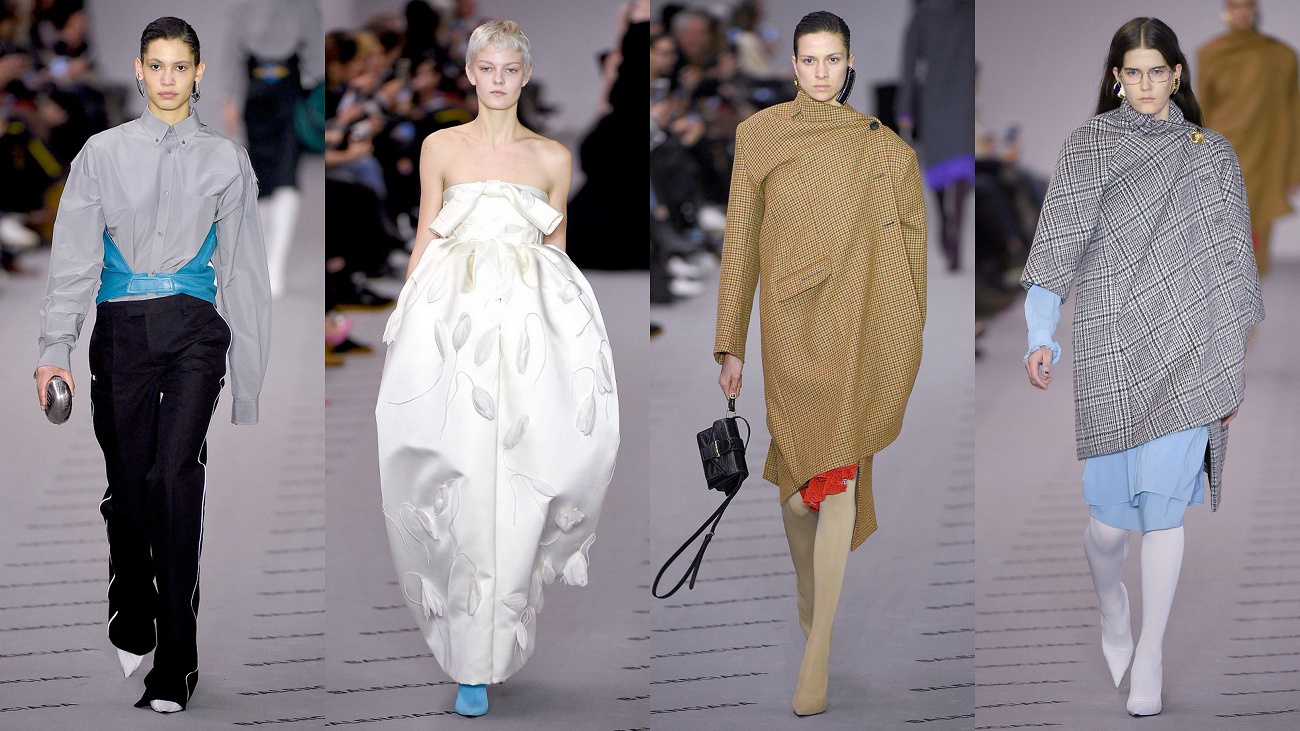 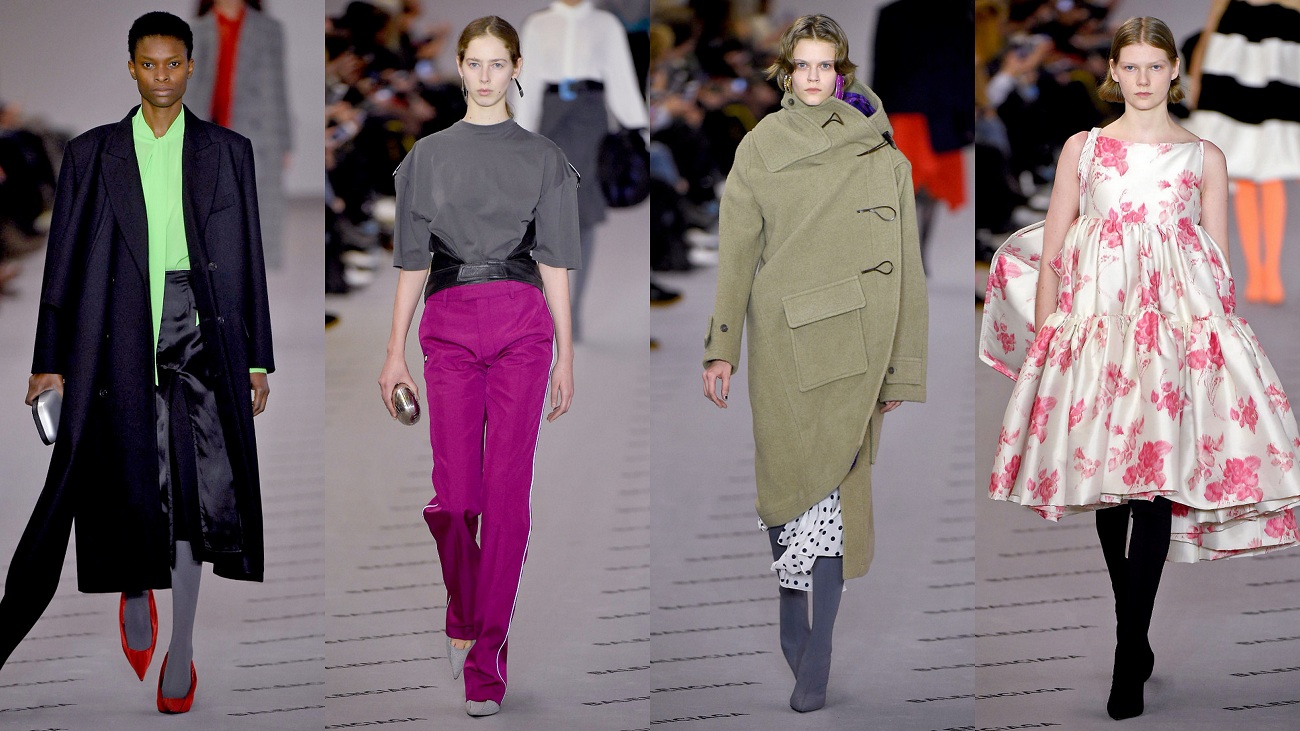 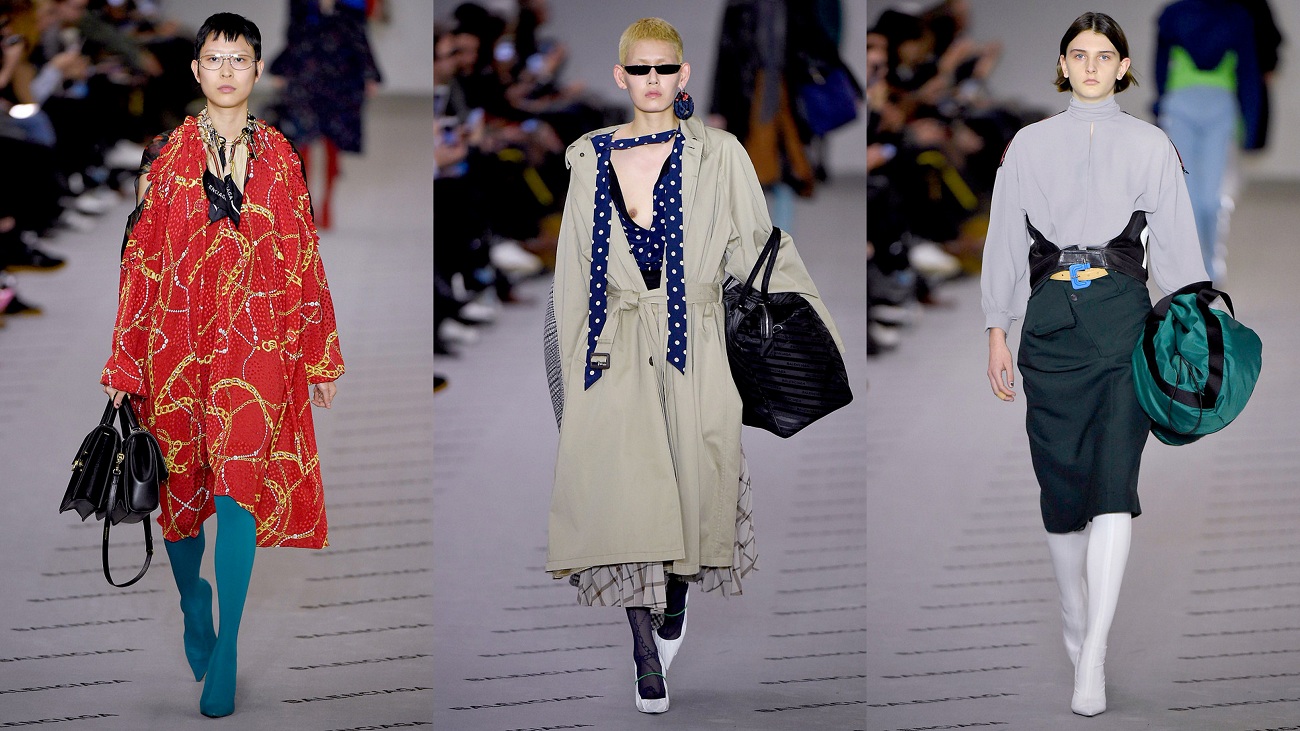 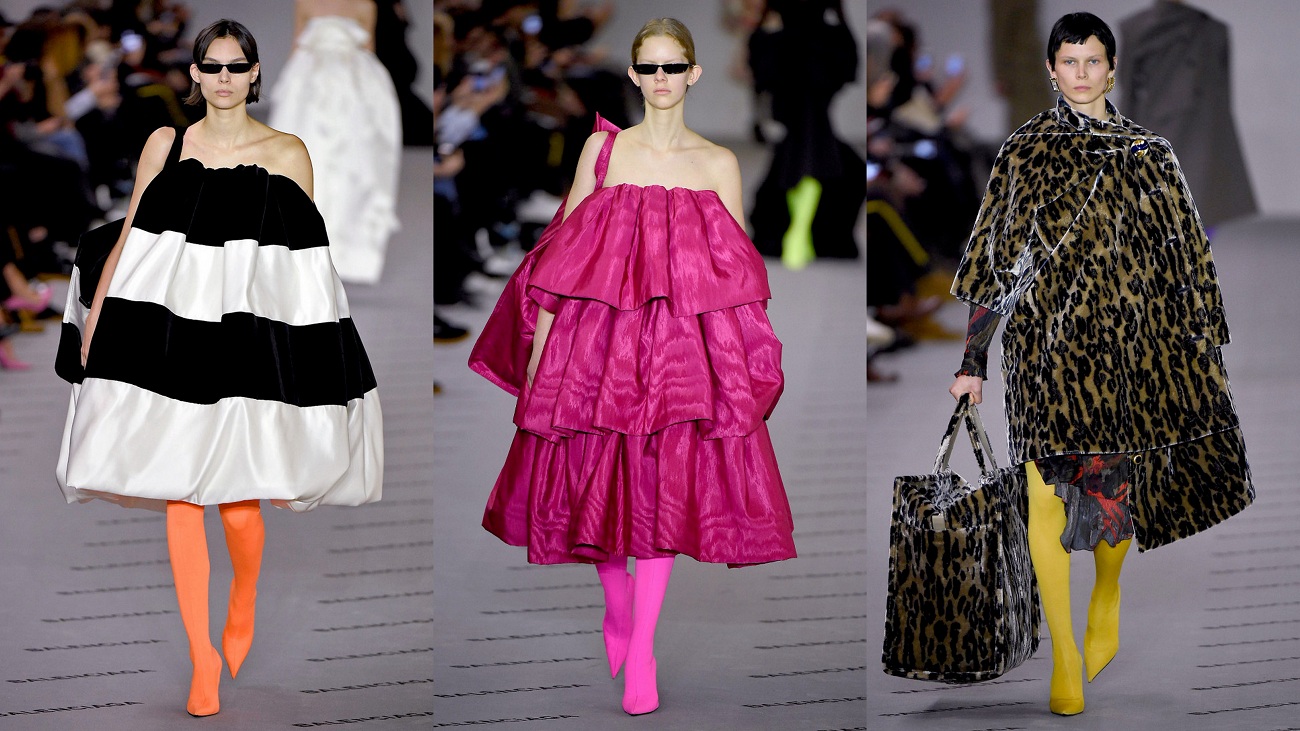 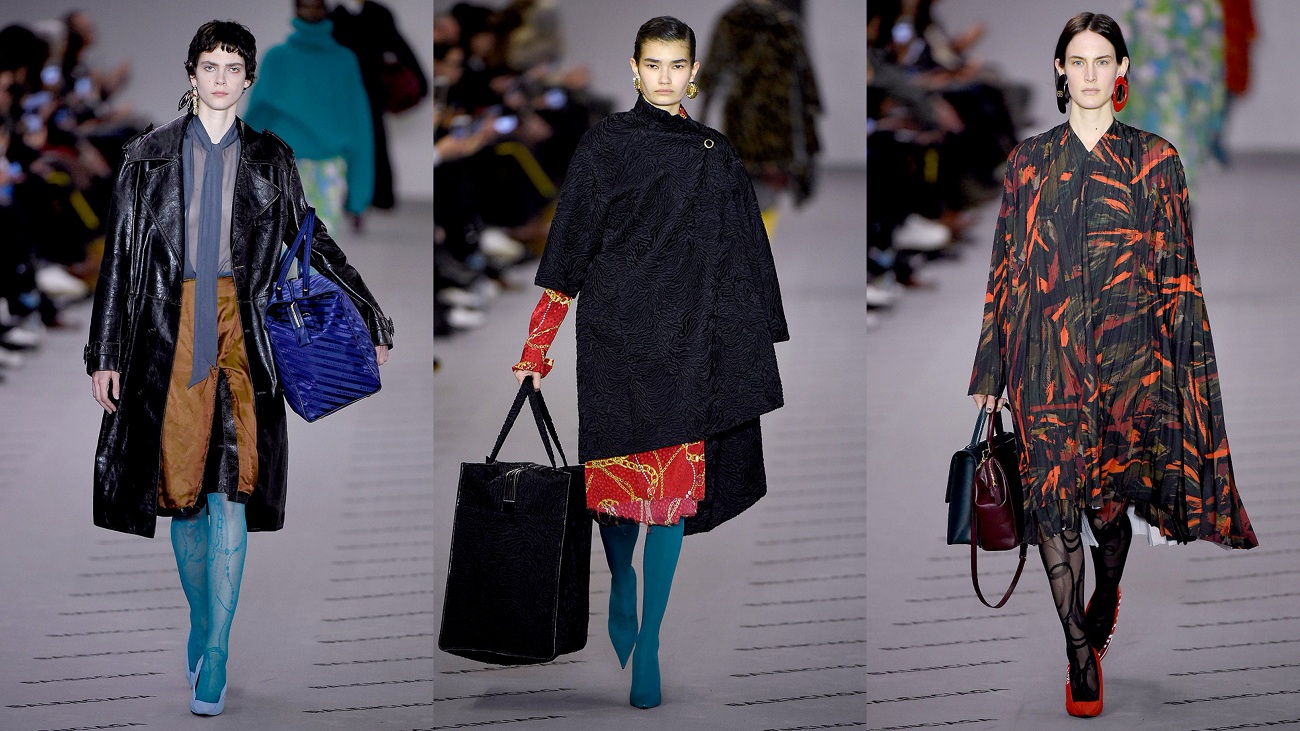 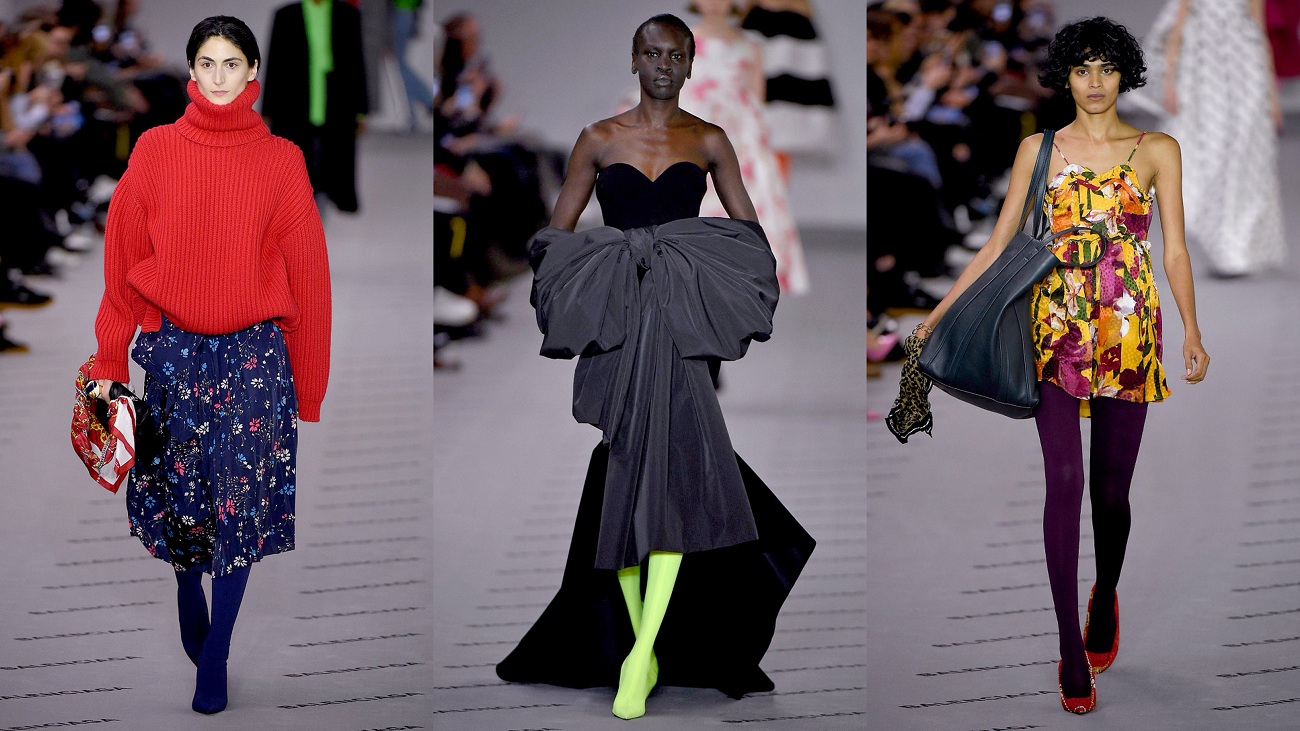 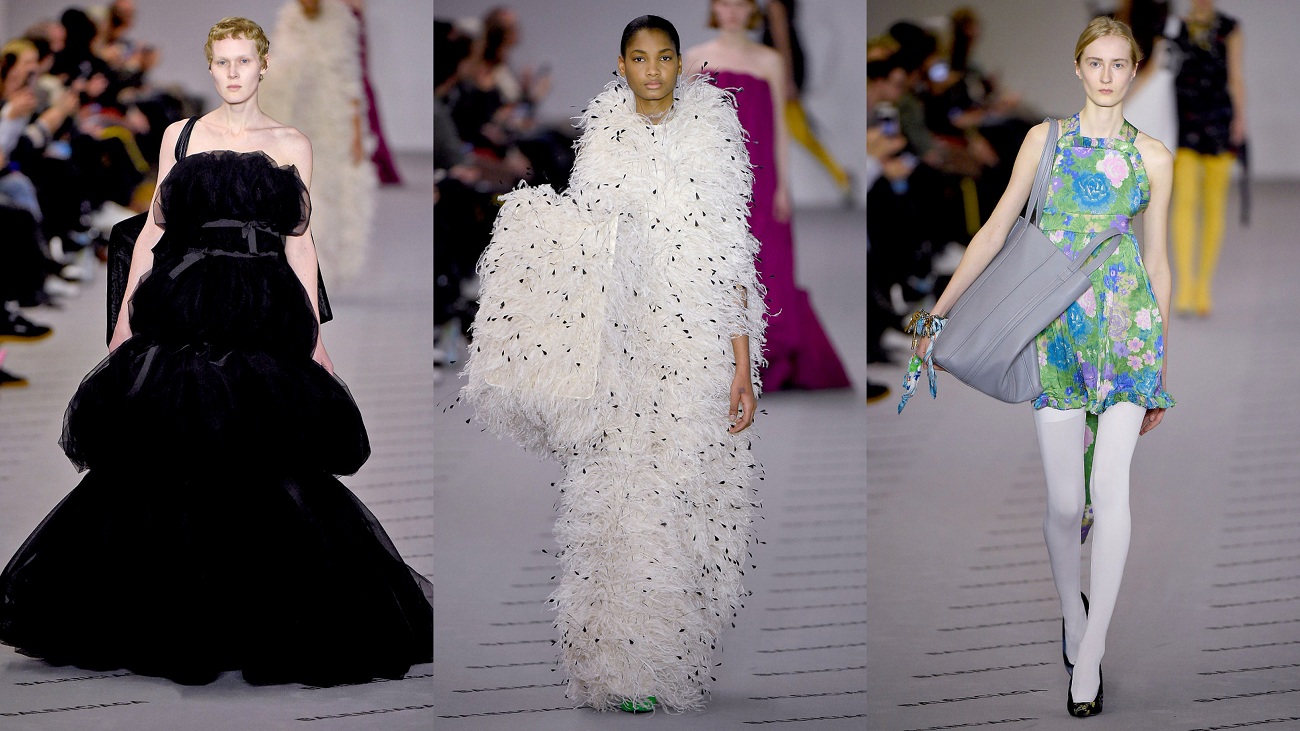