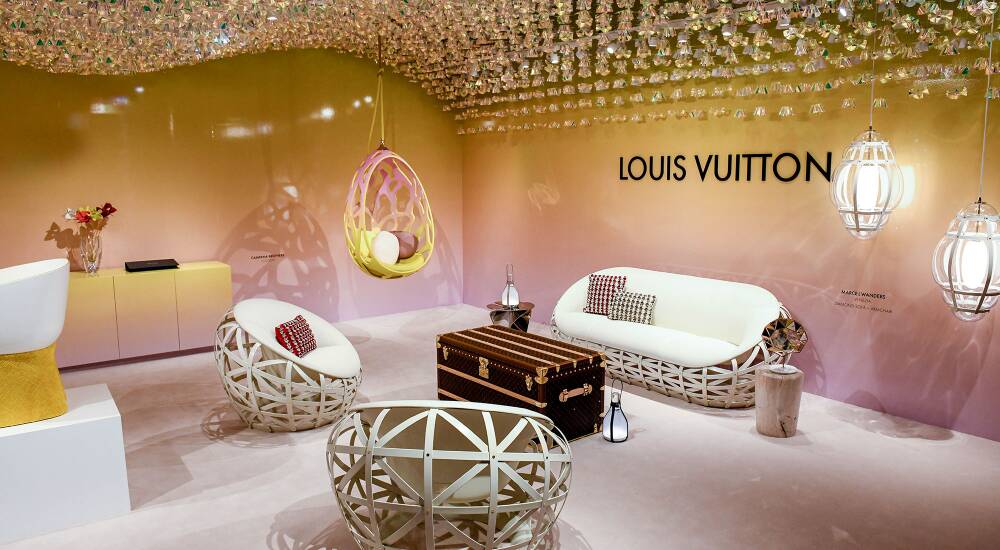 Started in 1970 by gallerists from Basel in Switzerland, Art Basel is the world’s premier international contemporary art fair. Its 15th U.S. edition took place in Miami Beach from December 3rd to 8th in parallel with Design Miami/ 2019, global forum for design bringing together each year the most influential collectors, gallerists, designers, curators and critics from around the world. During these events, LVMH Maisons showcased their artistic affinities with a series of unique projects. Louis Vuitton, Loewe, Ruinart, Berluti, Fendi and Maison Francis Kurkdjian all shared the spotlight at Miami Design Week 2019. 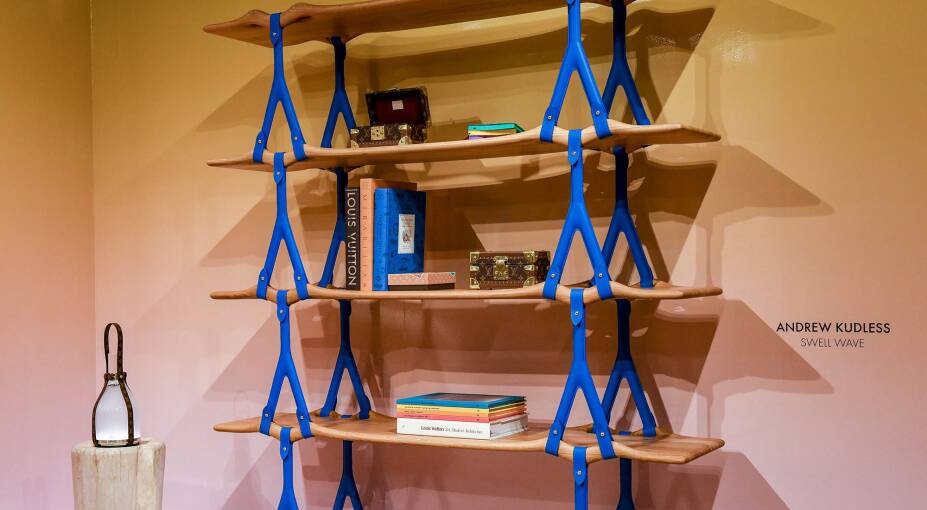 The Louis Vuitton Objets Nomades collection comprises limited-edition furniture and décor pieces inspired by bringing together the savoir-faire of the Maison and the skills of world-renowned designers. At Design Miami/ 2019, Louis Vuitton unveiled the latest addition to the collection, the Swell Wave Shelf created by San Francisco-based designer Andrew Kudless. An ode to the powerful forces and delicate balance of the natural world, this new Objet Nomade features undulating polished oak shelves held by sublime Louis Vuitton leather straps. 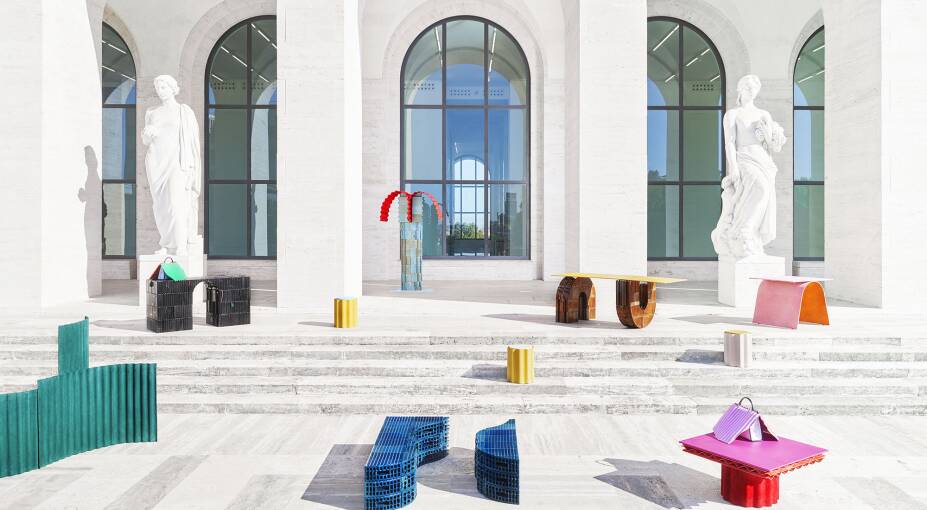 Working with Zurich-based design studio Kueng Caputo, Fendi presented a collection of pieces created to decorate the exterior colonnade of its headquarters in Rome, the Palazzo della Civiltà Italiana. The shapes of this architectural icon served as the starting point for a suite of pieces by Lovis Caputo and Sarah Kueng entitled Roman Molds. Known for their original use of materials, the two architects combined seemingly completely divergent materials, Fendi’s iconic Selleria leather and terracotta brick. At the same time delicate, solid, serious and playful, the Roman Molds collection shows how artisanal craft and bold creativity meld to achieve unexpected harmony. 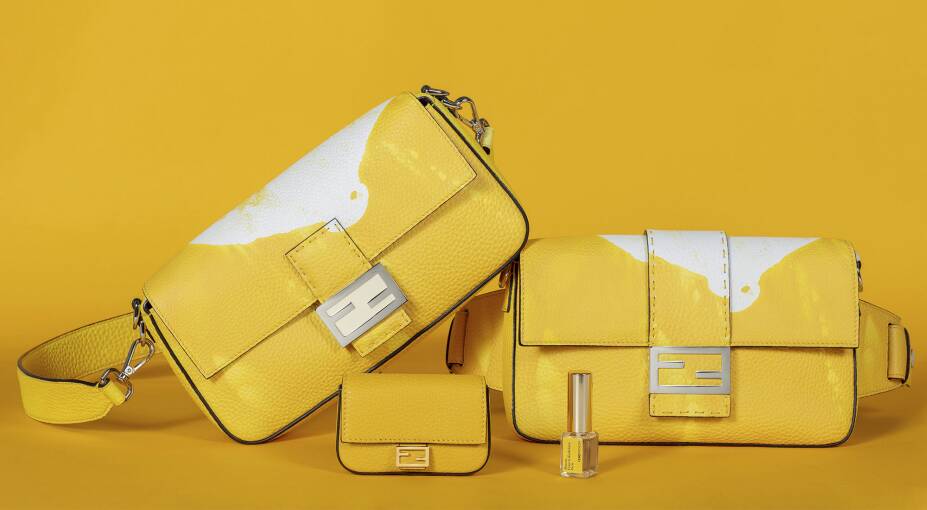 Alongside the exhibition of pieces created with Sarah Kueng and Lovis Caputo, Fendi also unveiled an exciting new iteration of its iconic Baguette bag. Since its creation in 1997 by Silvia Venturini Fendi, Creative Director of the Maison, the Baguette bag has constantly reinvented itself. Now for the first time, Fendi and Maison Francis Kurkdjian have combined their savoir-faire in a three-dimensional creation that solicits the senses of touch, smell and sight: the FENDIFRENESIA Scented Baguette. Using a patented technique developed by Parisian perfumer Francis Kurkdjian, the leather of the Fendi Baguette has been imprinted with a subtle eau de parfum, FENDIFRENESIA, whose leathery, musky notes reflect the nobility of the Selleria leather and the olfactory personality of this timeless creation. To reveal the visual imprint of this olfactory creation, Maison Francis Kurkdjian called on Swiss-Canadian artist and photographer Christelle Boulé, who has developed a technique consisting of depositing a few drops of perfume on a colored film paper which is then dried and exposed to light before being immersed in photo development baths. 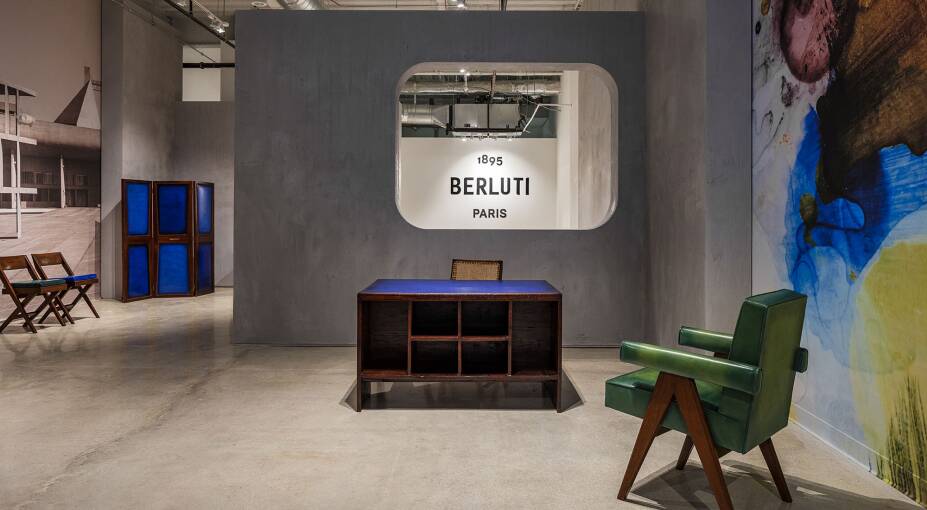 For Design Miami/ 2019, Berluti Creative Director Kris Van Assche teamed with gallerist François Laffanour to present a series of original Pierre Jeanneret pieces from the 1950s. The furniture has been restored by François Laffanour and upholstered in Berluti’s emblematic Venezia leather. As a tribute to the project Kris Van Assche has developed an entirely new color palette, enhancing the depth of color for each piece thanks to Berluti’s signature hand-applied patina technique. 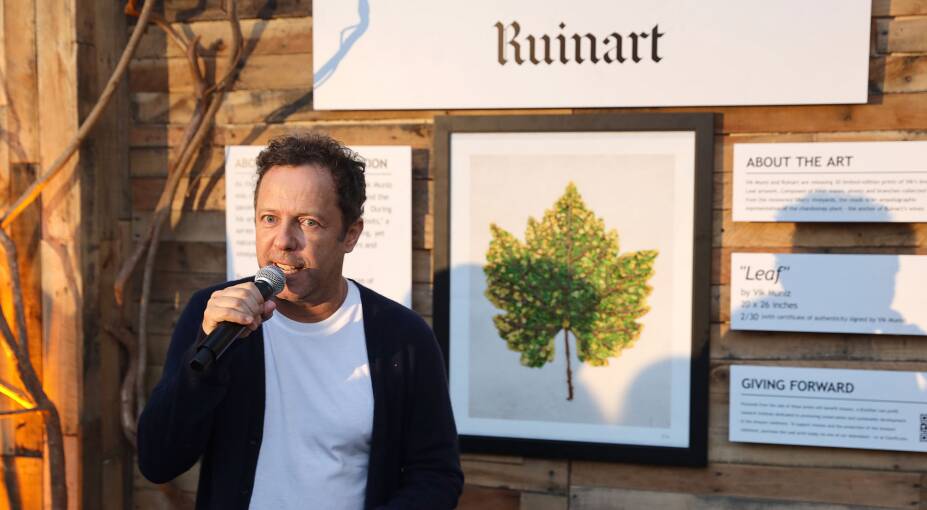 Official Champagne for Art Basel fairs for the past decade, Maison Ruinart has always been deeply engaged with the world of art, notably through an annual series of artistic collaborations. In 2019 Ruinart gave carte blanche to Brazilian artist Vik Muniz, who shares his vision of the terroir and savoir-faire in which the Champagne house has been rooted for nearly 300 years. Works created during this residency were presented in the Collectors Lounge during Art Basel Miami Beach 2019. During the VIP preview of the show on December 4th Ruinart hosted an event to raise funds to preserve the Amazon rainforest. Proceeds from the sale of 30 copies of the Chardonnay Leaf work by Vik Muniz – printed specially for the occasion and signed by the artist – were donated to the non-profit Imazon. Maison Ruinart is proud to contribute to this noble cause by supporting the organization, which is dedicated to conserving the Amazon rainforest.