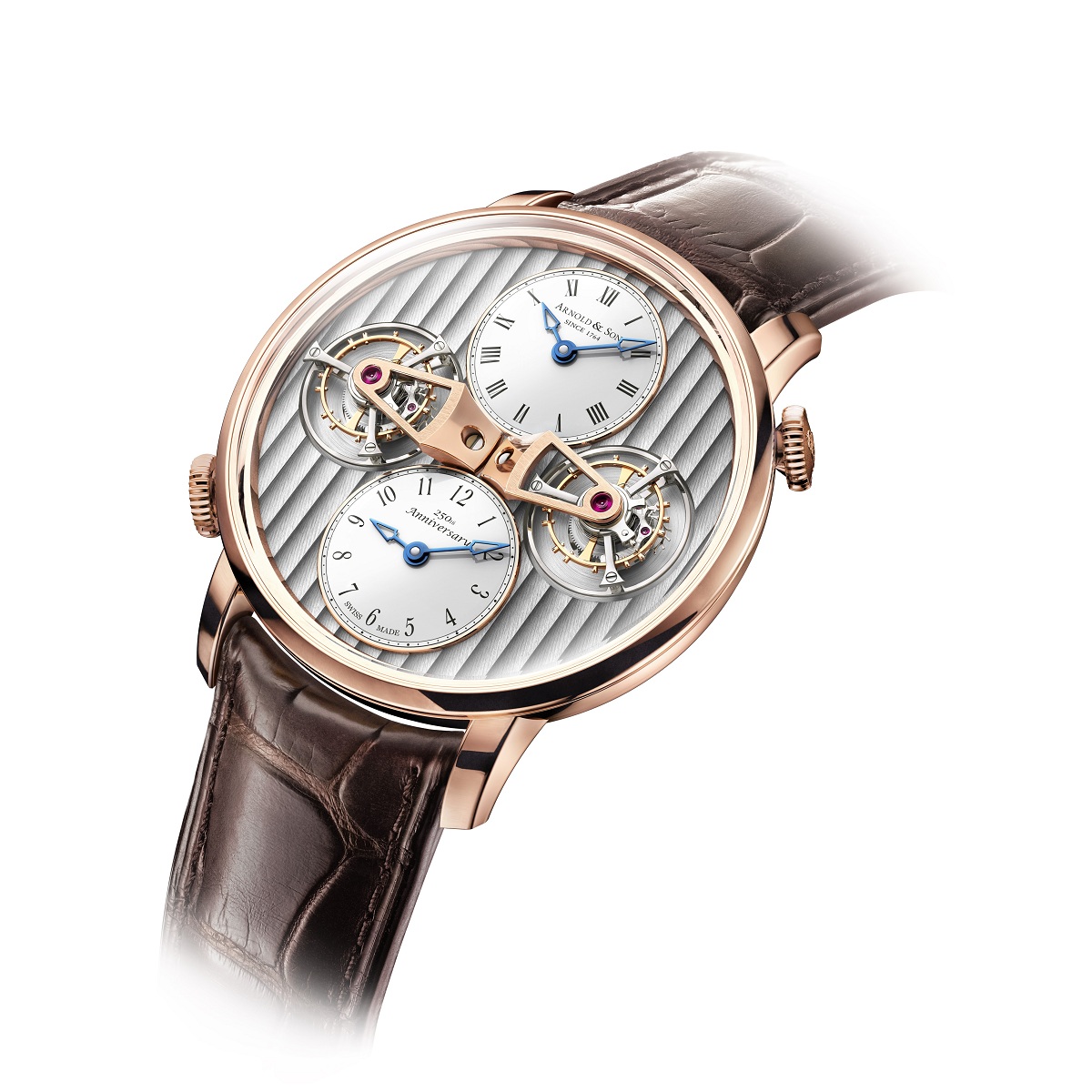 Knowing the time determines your location. This fact has been proven throughout the history of high-sea navigation thanks to its close ties to watchmaking. Dual time zones are central to Arnold & Son’s history, with the marine chronometers of yesterday and today’s two iconic models, the DTE and DBG Skeleton.

To pay homage to its founder John Arnold (1736-1799,) Arnold & Son has always treated dual time with a particular degree of sophistication and accuracy. Instead of the traditional GMT system where an hour hand in the center indicates the secondary hour, Arnold & Son chose to give each of the two time zones a dedicated regulating organ to recall the duality of the measurement methods – one horological, the other astronomical – used aboard English frigates.

The DTE model combines Dual Time with two tourbillons. In the A&S8513 calibre, they are connected by a common motor organ, a pair of barrels providing a running time of 90 hours. These barrels then supply each of the separate gear trains, which each end in a tourbillon. These independent components indicate the hours and minutes and ensure an exceptional level of timekeeping. 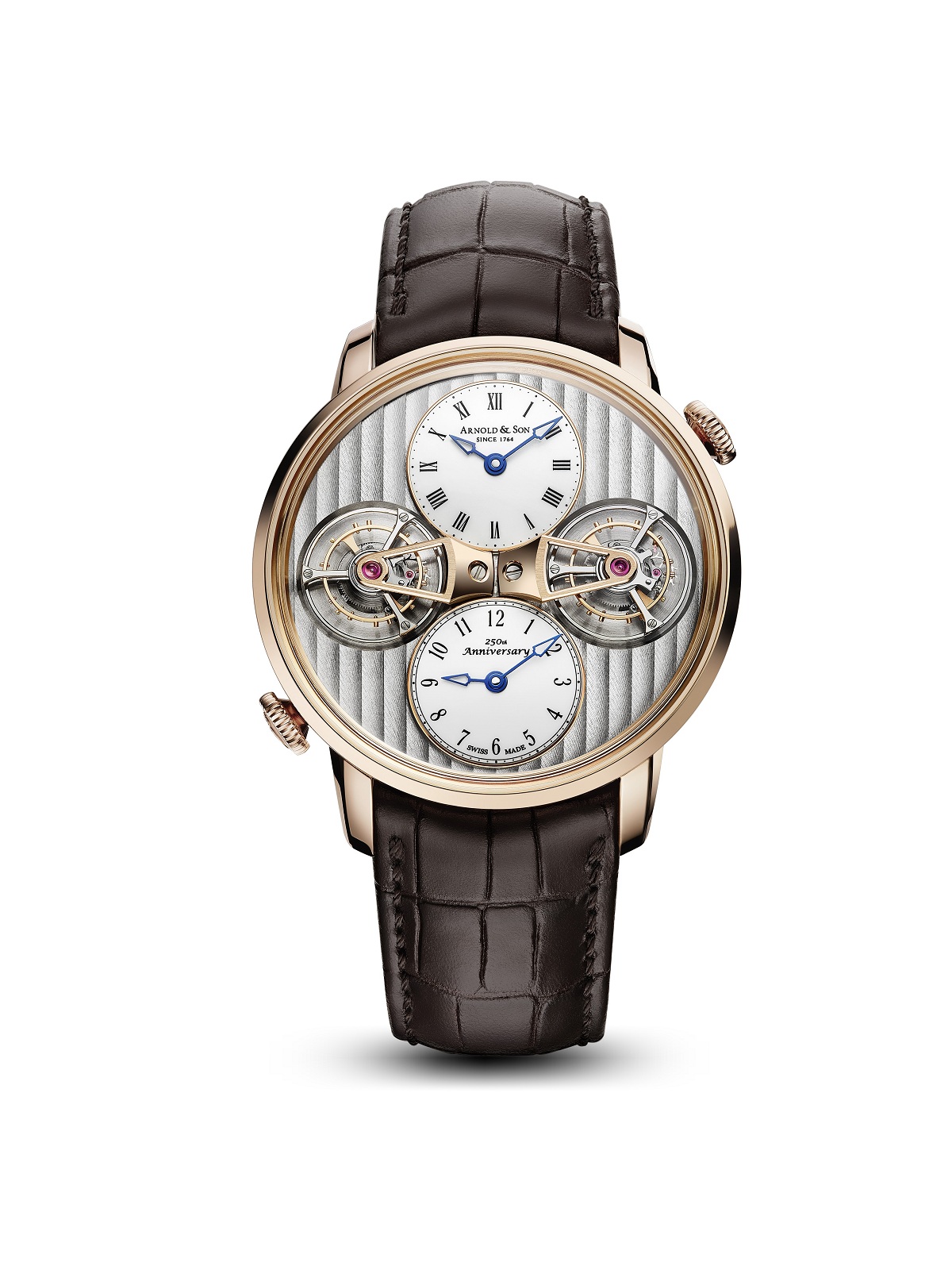 The symmetry of the indications – an Arnold & Son signature – is particularly evident on this DTE model. The two time zones – local time in Roman numerals and reference time in Arabic numerals – are superimposed at 12 o’clock and 6 o’clock respectively. The tourbillons mirror each other at 3 o’clock and 9 o’clock and appear to float in mid-air thanks to their hand-chamfered 18-carat gold bridges. The mainplate on the dial side presents a vertical Côtes de Genève finish. To add to the balance of this timepiece, the crowns are positioned at 2 o’clock and 8 o’clock, allowing each time zone to be adjusted independently. 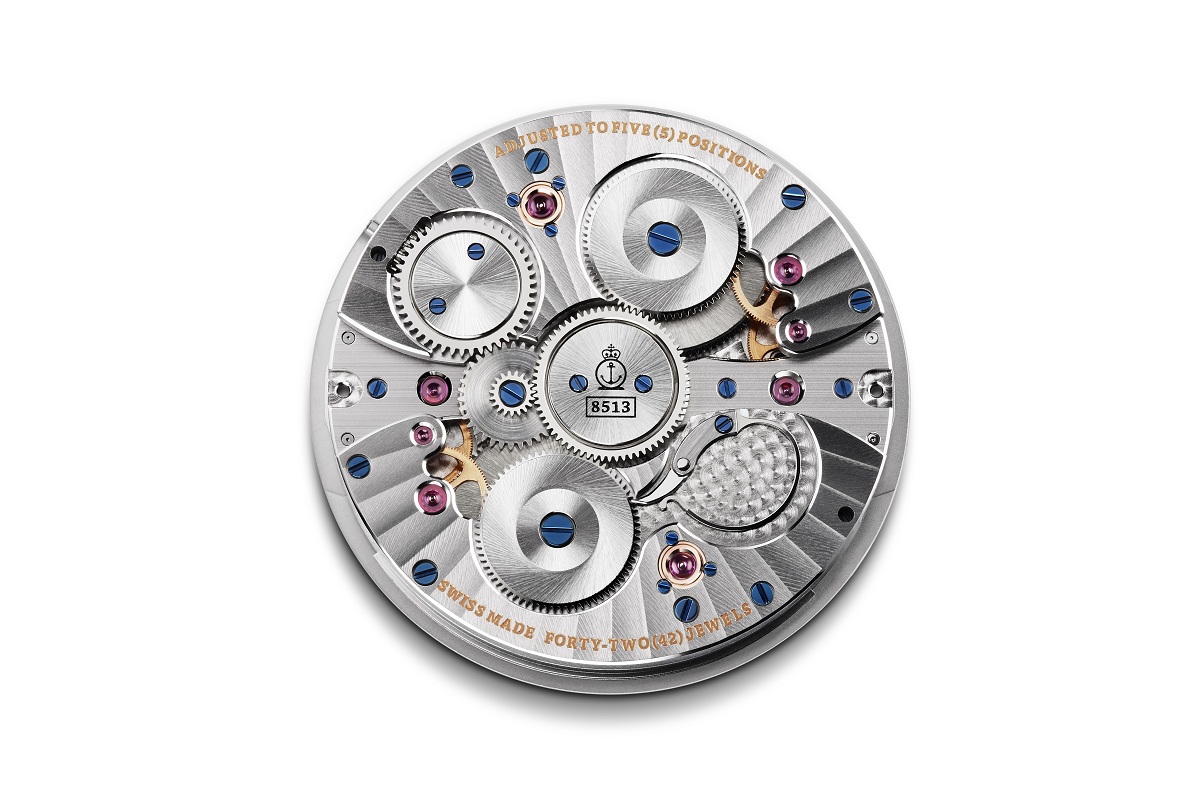 The DTE is housed in an 18-carat red gold or white gold case with a sapphire crystal case back that reveals the entirely decorated movement, the mainplate with its radiating Côtes de Genève finish, and the circular satin-finished wheels. 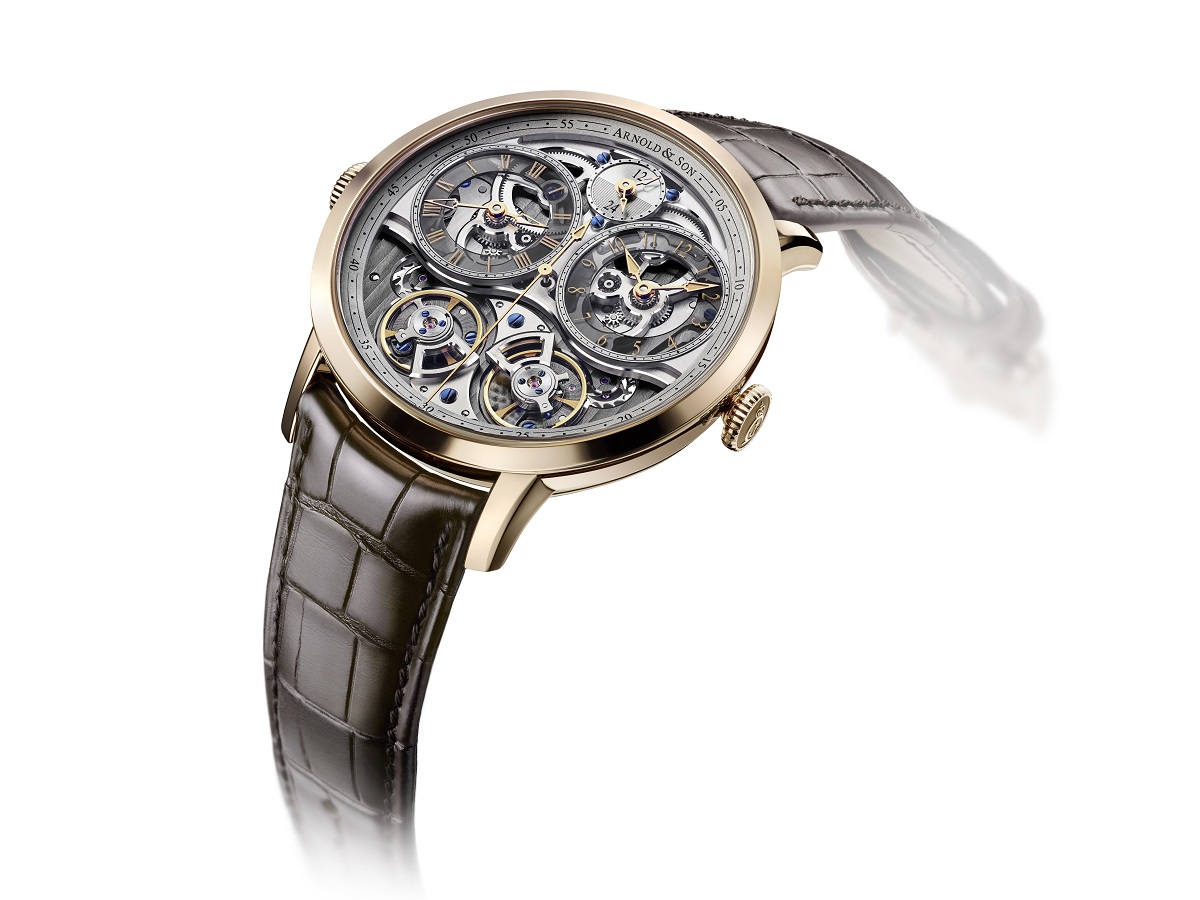 Meanwhile the DBG Skeleton model uses two traditional regulating organs. They have been constructed using the same principle of independence as the DTE but taken even further. The A&S1309 calibre has two complete and independent kinetic chains. Each time zone has its own barrel, gear train, escapement and balance-spring assembly. They are positioned side by side on the same mainplate. They share a central seconds hand and a day/night indicator. This indicator, located at 12 o’clock, is fitted with two concentric hands, each referring to one of the time zones of this one-of-a-kind timepiece. 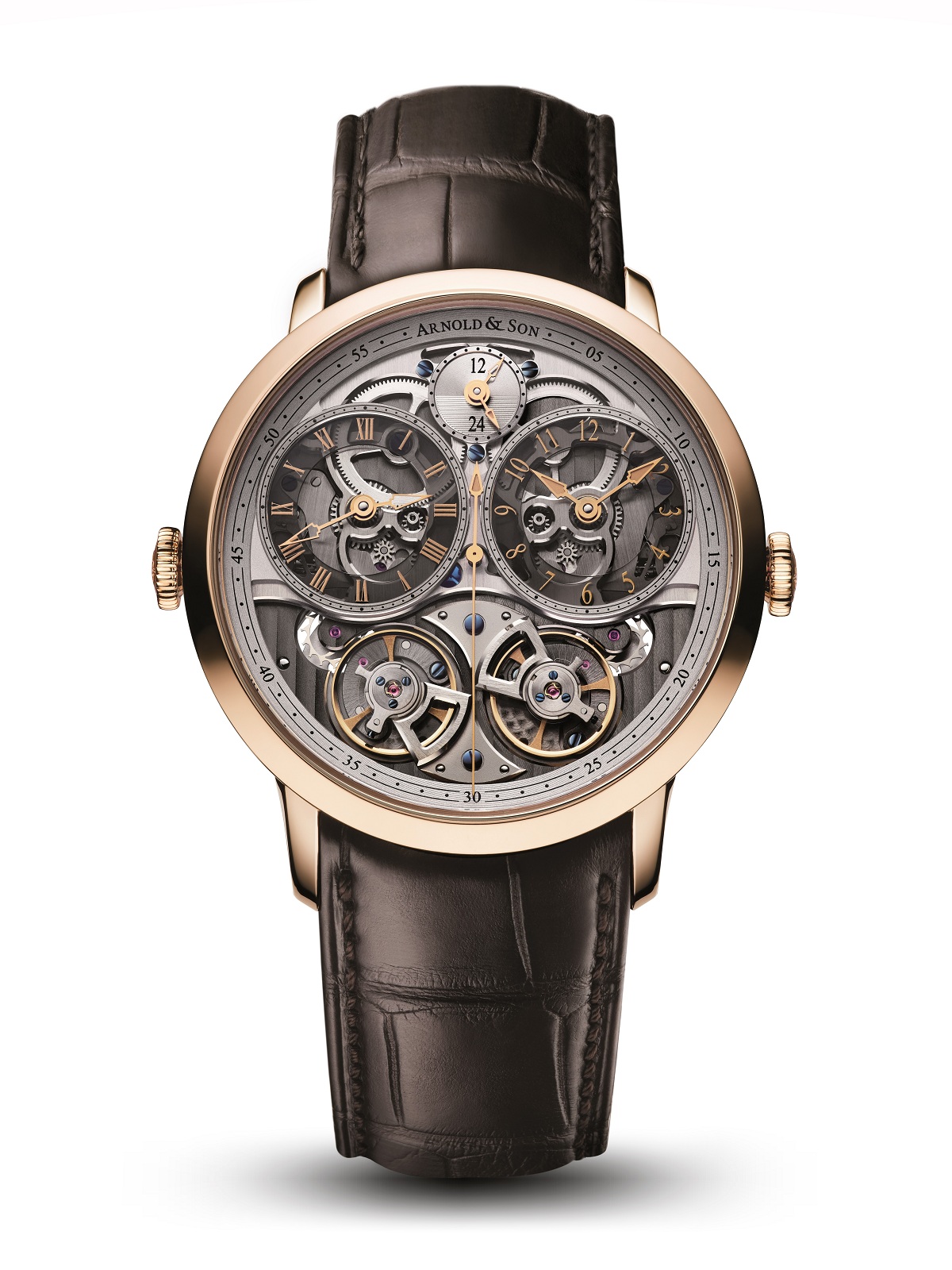 Particular attention has been paid to the time display. A tinted sapphire disc has been selected for each of the dials. The local time zone is indicated by hands with a skeletonised tip and Roman numerals, while the reference time zone is distinguished by solid-tip hands and Arabic numerals. The day/night indicator at 12 o’clock uses the same hand design to differentiate between the time zones. To add to the symmetry of the DBG Skeleton, two crowns sit opposite each other at 3 o’clock and 9 o’clock. This makes it possible to adjust each time zone independently, while the double barrel is wound simply by the crown at 3 o’clock. 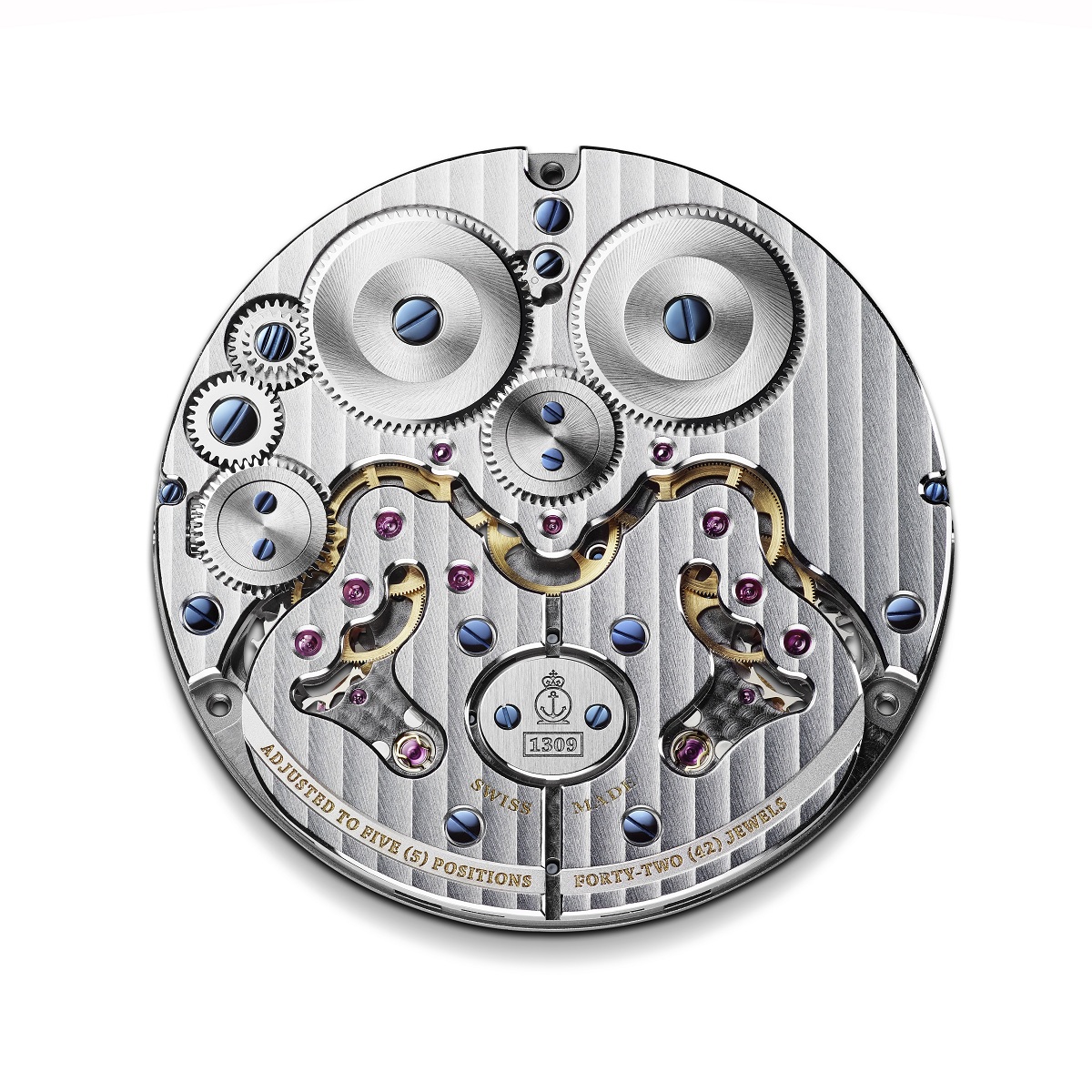 Housed in a rose gold case measuring 44 mm in diameter, the entirely skeletonized A&S1309 manufacture calibre is meticulously worked, with chamfered and polished rhodium-finished bridges complete with satin-finished surfaces. On the back, the mainplate reveals a rhodium treatment decorated with Côtes de Genève, while the wheels are satin-finished to add a noticeable contrast.

At once graphic, cartographic and hemispherical, the Arnold & Son Globetrotter Night gives its display of world times over to the night. Beneath a crystal dome, this timepiece plays on nocturnal nuances and city lights. In...